I love Ernest Hemingway. There, I said it. Anti-Semite, racist, mysoginist, drunkard, jerk… On and on the epithets go – but I’m judging the man’s work, not his personality. I’m reading my Hemingway “up;” from the shorter stuff like “Snows of Kilamanjaro” and “The Old Man and the Sea,” and this book. Though over 200 pages, it can still be read in a day or two – and should be. Now, you may be one of those people who finds Hemingway, and this book in particular, hopelessly boring and lacking any discernable plot. 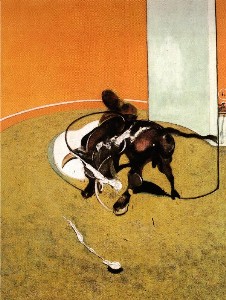 Well, you’re crazy. Go read it again. Go. Now. I’ll wait. Bookmark this page and come back to it when you’re done. Now, for the rest of you: The Sun Also Rises follows the exploits of a group of British and American expatriots around France and Spain back in the early part of the 20th century. No prohibition in Europe! And the flappers did more than just flap, that’s for sure. Jake Barnes, fresh off a war injury that has rendered him impotent, lolligags about town, fruitlessly flirting with the lovely Brit named Brett. Boy, nothing like feeling Jake’s pain that he can’t consumate his obvious feelings for Brett.

And vice-versa of course. Brett galavants around, sleeping with several men as surrogate Jakes, so to speak. Perhaps this accounts for Jake’s caustic wit or his need to “get away” by traveling down through the Pyrenees to fish in Spain. Of course, this band of expats was already escaping in a sense simply by being in Europe. Throw in the fact that they drink to excess on a daily basis and you begin to get a feeling for what the “Lost Generation” was all about. I’ve read that Jake IS Hemingway himself, but my book reviews rely on my own thoughts and feelings, so for an in depth analysis of this (and all the other Top 100 books), go to a Literary Review site.

There are a couple other main players in the book; Robert Cohn the Jewish writer who wishes he were half as cool as Jake, and Bill Gorton – who is half as cool as Jake, if not more so. Bill is hilarious and here’s what I enjoyed most about the book. It is written in a terse, straightforward style that I could take a lesson from. But more interestingly, conversations play out just as they’re spoken without any descriptors. So when Bill makes a sarcastic crack about Cohn’s nebbishness it doesn’t say, “said Bill sardonically.” We only read what they say and must infer the meaning behind the words. To pull this off with sarcasm is a neat trick – and one which I loved. Especially because it was so caustic and funny. Take this exchange:

“There comes Cohn,” I said. Robert Cohn was crossing the street.
“That moron,” said Harvey. Cohn came up to our table.
“Hello, you bums,” he said.
“Hello, Robert,” Harvey said. “I was just telling Jake here that you’re a moron.”

Now, if you don’t love that, you won’t love this book. Because that’s some good stuff right there.

The story itself is somewhat ancillary – Jake and Bill hire a car to take them down to Spain for a month where they fish, meet up with Cohn, make Cohn’s life miserable, Brett shows up with her drunkard fiance Mike, and then all hell breaks loose. Cohn was still in love with Brett, Mike was broke and useless but protective, Jake hates everyone, and they all get really, really drunk. A lot. And only then the fiesta starts with the Running of the Bulls in Pamplona – the “wonderful nightmare” as Hemingway describes it.

Booze and fights, fights and booze. Brett meets Pedro Romero, the top bullfighter of the event, and falls in lust. Booze and fights, fights and booze. Once it’s all over, Jake reflects on his somewhat empty life and job, runs to the sea to cleanse himself, and we’re led to believe his life would start anew. But again, it’s Hemingway’s adjective-less style and yet somehow brutal-beautiful descriptions of the bulls and the bullfights that makes this book great.

Another thing that I enjoyed was recalling that Hoang and I actually have been to or been near a few spots along Jake’s travels. We stayed in the Pyrenees on French soil in a Spanish hotel in Cauterets. We watched a bike race (The Tour de France) on a mountainside (the Col de Tourmalet) with a million insane Basques. Jake meets cyclists racing in the Tour de Pays Basque which is a real race that continues to this day. The smells and cafes and sights and sounds of southwestern France are vivid, wonderful memories for both of us – though we weren’t on a month long drunken bender there, I could still identify with Jake to some extent.

Artwork: “Study for a Bullfight” by Francis Bacon, 1969