I haven’t yet decided if I love or loathe the Hamden Land Conservation Trust’s habit of naming their properties by simply stating their addresses. I’m happy to report that the HLCT has changed their entire property nomenclature and they now all have normal names! On the one hand, I appreciate the simplicity of that. On the other, it takes all the romance out of each site. And if it’s romantic hiking you seek, fire up the Robert Frost and hit the trails at bucolic Powder Farm. 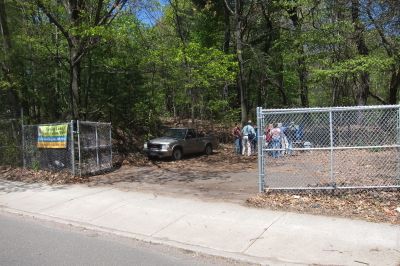 Okay, so that last line is funny to the 200 people in the world who have ever hiked at Powder Farm – the least “romantic” place to hike in Connecticut. One of them anyway… but that’s precisely why I went there.

— Interrupting here for a minute. I just spent a long time down the land owner Olin Corporation wormhole and will have to do my best not to send you there as well. It’s an ugly hole. And no one likes ugly holes. So I’ll hold off on that for a few paragraphs and just stick to what brought me here and how it was. 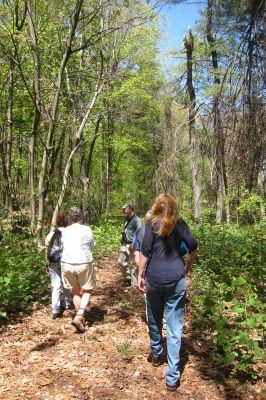 Sorry about that. The HLCT hosts nature hikes at this property once or twice a year. Or every few years. Or perhaps never again. I’m not sure. It consists of 102.5 acres forest, trails, wetland, and five lakes (again, all owned by the Olin Corporation). It is a mere block east of the commercial strip of Dixwell Avenue and the “trail” is actually an overgrown old road. The property is surrounded by 8 foot barbed wire fence and there are KEEP OUT signs all over the place. The HLCT pays Olin $300 per year to have this special 2 hour access and rumor has it that Olin is thinking about ending the relationship. 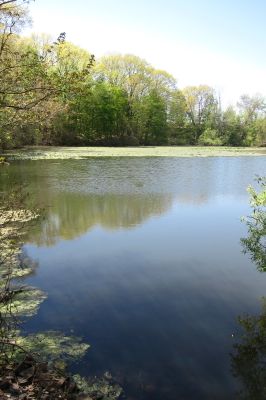 As of 2018, there is no mention of Powder Farm on the HLCT website and there hasn’t been a Powder Farm update on the HLCT facebook page since 2013. It appears that my hike of this property was the last public hike of the property.

Why all the hub-bub? The property was used during World War II for munitions testing and the bunkers that were used for storing gunpowder can be seen along the trails. They are easily noticed and pretty darn cool in an apocalyptic sort of way. 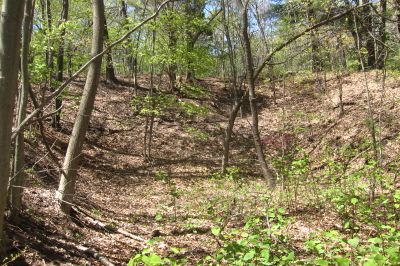 But our “hike” was maybe a quarter mile down an invasive (Japanese knotweed, barberry, Norway maples, winged euonymous, garlic mustard, phragmites) and horrible (poison ivy) species-bordered crumbling road. We were guided by two knowledgeable and nice guys who seemed legitimately interested in the stuff they were presenting. I love that.

As you can probably tell, I was hoping for more of a hike and not a lesson on shrub identification, but that was a failing on my part, not theirs. But! But I was ecstatic to have made the effort and to have had the opportunity to get onto the Powder Farm property. 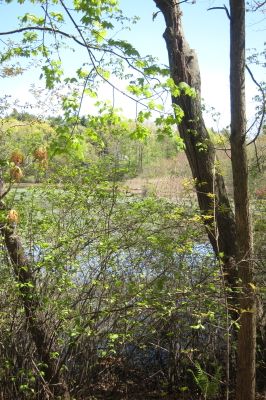 One reason was that I met the Julie Hulten in person – I like to think of her as Miss Sleeping Giant. Her tireless efforts with the Sleeping Giant Park Association make hiking there a pleasure for people like me. I know she reads a lot of stuff I write and it’s always humbling to meet people like her in person. We shared some stories and, well, it’s always great to meet like-minded people like Julie. The other reason is to learn about the slightly sketchy history of this land.

So, do I recommend the Powder Farm hike? No, not really. Not if you’re just some regular person who wants to go for a regular hike in the woods. This is not that.

Feel free to now skip to the next HCLT property just a short drive away, at 165 Mather Street, and avoid all the following stuff about the Olin Corporation.

Are you still with me? Good. Because who doesn’t like a little beserker corporate history mixed in with your toxic wetland dump sites?

The guys leading our hike knew a little bit about the property’s history and told us this: Back during WWII, Olin owned New Haven’s Winchester Repeating Arms, the historic and semi-famous New Haven ammunition and munition company. This land, which Olin calls “Pine Swamp,” was a munitions testing area. Certainly necessary and important. 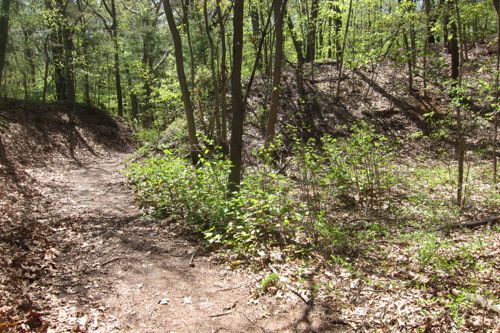 Back then, I assume, Dixwell Avenue and its surrounding area weren’t the commercial wastelands they are today. The bunkers built into the hills stored the explosives (which, we were told, exploded on occasion) and the lakes were ideal for firing certain types of guns and rounds for testing.

They’d set up strobes and film the ammo and review the films to learn how each round was tumbling through the air. Cool.

Not so cool: Olin/Winchester would just dump, pile, and bury all the waste. Ash, coke, whatever. Winchester moved into the manufacture of all sorts of household items (including batteries and such) and would use this land (and other areas a short way south of here) for dumping industrial waste. Wetlands were useless and unimportant back then. 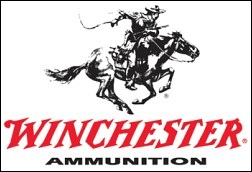 And so it sits. The ground water as well as the five lakes here that feed ultimately into the much bigger Lake Whitney and Quinnipiac Rivers but supposedly don’t contaminate them.

And so it sits. People break into the property to fish for monster cancer fish – there’s evidence of this illicit activity all along the shores of the lakes. MMm, giant cancer fish. 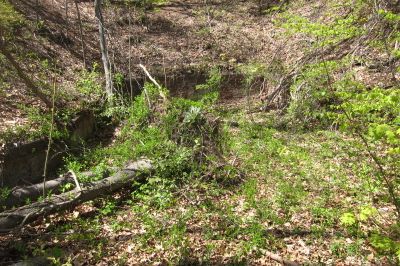 At this point, you’re wondering “Who is Olin?” Olin is a very old, very massive, very interesting company. They have manufactured EVERYTHING over their 130-year existence. Their corporate history is an amazing read.

Seriously – go to the About and then History. You won’t believe what companies they’ve owned and the various businesses they’ve been – and still are – in. Skis, artillery ammunition, housing, cellophane, textiles, brass, pool chemicals, you name it. It’s nuts. You’d think they’d have a few bucks to clean up their messes.

And in some cases, they do. Like in Hamden’s Newhall neighborhood a few blocks away, which is infamously on the Toxic Action Center’s Dirty Dozen list. The biggest street affected? Yeah, that’s Winchester Avenue. A nice touch.

Oh, and they built a school on top of toxic chemicals. And a neighborhood. A neighborhood that is being remediated as I write.

Now, of course hundreds of companies did this all over the country and people were ignorant back in the day. I get that. But to allow the town to build a school on top of drums of chemicals is a bit nuts.

There was a lawsuit.

And at least now if you are researching homes in the area, you can find this about the Newhall section of Hamden.

This crap is part of our human history and quite frankly, nothing really has changed. Fertilizer plants blow up in Texas because humans are mess up. We continue to not give a hoot about destroying the planet. Rumors abound that Pratt and Whitney’s generous donation of the land for UConn’s footballs stadium in East Hartford is nothing but a creative cover-up of who-knows-what that’s underneath the parking lot there.

I don’t mean to bring you down, but I can’t help but find all this stuff interesting. Environmental destruction used to be readily apparent back during the Industrial Revolution. Now it’s just hidden a little bit better.

But I will continue to venture forth and find the little gems around the state where, one hopes, this has never been an issue. Unfortunately, Hamden is not one of those places.

I invite you to continue on with me as I flitted all around Hamden and its land trust properties – the next one has a bit of Olin taint to it as well! Woo hoo.