This is a funny one. It’s one of Connecticut’s many “undeveloped” state parks – but has a really cool thing in it that makes it one of the “undeveloped” parks well worth visiting. In fact, for the first time in my life, I wasn’t alone in an undeveloped state park! Wild! 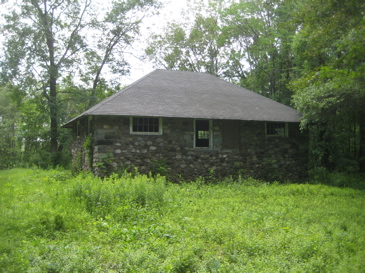 That “really cool thing” is the Camp Columbia Tower – and of course it was the main reason I found myself in the hinterlands of Morris. Here is my report on my visit to the tower itself.

But the tower is but part of a rather fascinating history of Camp Columbia. I don’t really see any need to rewrite what the DEP has already provided us, so here you are:

More than 120 years ago two forces came together that ultimately left us with today’s Camp Columbia State Historic Park. In the late 19th century, Morris, Connecticut, which encompasses most of the 955 acre Bantam Lake, had become a bustling resort community. Attractive to those with money, the community caught the eye of Columbia College Engineering School of Plane Surveying, which had begun teaching classes in 1884.

Imma letchyou finish, DEP (now the DEEP, actually, but whatever) but I have to interrupt to note how crazy that sounds to us in 2012. Morris was a bustling resort community?! (Then again, so was East Hampton, so I guess anywhere with a lake was “fun” back in the day.) I should also note here that Bantam Lake is Connecticut’s largest natural lake. Yeah, I’ve got a page about that too. 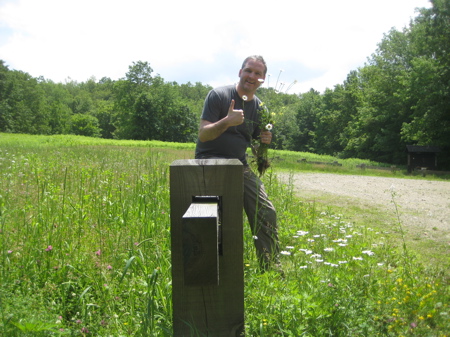 Escaping the heat of the New York summers, the Engineering School decided to move its classes to Connecticut in 1885. That summer saw a group of 46 students spend their summer at the new engineering camp in the country. They stayed the season at the Horatio Benton Farm, working and learning in the surrounding towns and forests.

Sorry. Me again. I’m curious what the temperature differential is between upper Manhattan and central western Connecticut. One degree? (See comments for more on this important issue.)

Groups of students returned every year through 1891, mostly living at the Island Hotel at the north end of Bantam Lake. As the program increased in popularity, Columbia College (now Columbia University) decided to create a permanent outpost for the Engineering School.

Accordingly in early 1891, Columbia began the lease of 120 acres of land, south of Bantam Lake. The property included a farmhouse, two barns, several farm support buildings, and large fields previously used for agriculture. Students who used the camp in these early years lived in thirty-five tents surrounding the main farmhouse. 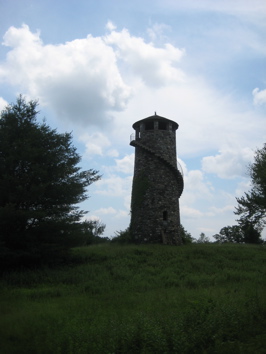 Camp attendance increased between 1898 and 1903 from 52 to 195 students. Consequently, in 1903, Columbia College (now University since 1896) purchased farmland to serve as a permanent summer camp for their students, their tent cities destined to be replaced by permanent buildings. Between 1903 and 1917, Columbia continued to buy large tracts of land adding 471 acres to the property. These holdings included, for the first time, a narrow access-way to the lakefront.

During the First World War the Camp served its country as a military combat training facility for Columbia students planning to apply for officer’s commissions and expecting to participate in the conflict. From 1917 to 1919 students received training in military drills, rifle practice, map making, camouflage training, and trench digging. Over 300 yards of trenches were dug into the property to simulate the warfare conditions in Europe.

Captain Ralph Williams of the Canadian Light Infantry, a decorated veteran of the French and Belgian fronts, was in charge of the program. Students were required to march, drill, and fight in simulated warfare that included real as well as dummy gunfire and explosives. 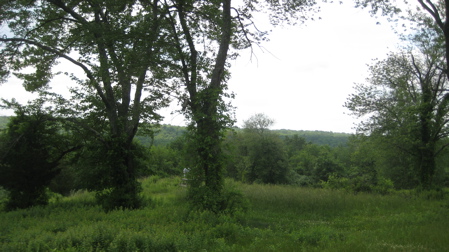 After the war, in the years between 1930 and 1950, the now 591-acre Camp continued to develop. In 1935, on the 51st anniversary of the founding of the Camp, a spacious fieldstone Dining Hall was built. The existing wooden water tower was replaced with a stone tower in 1942 as a gift from the Class of 1906.

In 1948, Dwight D. Eisenhower became president of Columbia University. A great football enthusiast, he encouraged the creation of a miniature football field and sports program at Camp Columbia. The university football team also practiced here, and Eisenhower is one of the dignitaries who reportedly hunted on the property. Although no conclusive evidence has been discovered, local lore states that the New York Giants used this as a practice field at some point.

I hate the Giants.

By the 1950s, summer class attendance at Camp Columbia was mandatory for students of the Engineering Department. Courses offered at the Camp during this time included: Chemical Engineering, Civil Engineering, and Technology & International Affairs. The Columbia University American Language Center held lessons for international students taking entrance exams to American colleges and universities.

But the 1960s and 1970s brought both declining interest in the “camp” environment and changes to the School of Engineering curriculum. The facility lost attendance dramatically, and while the Camp was populated by students until 1983, Columbia University decided at last to close it and attempt to sell the land. 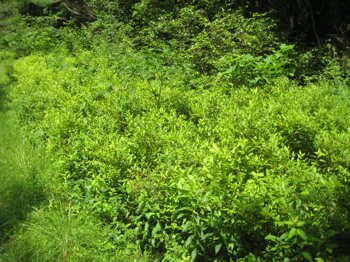 Finally in 2000, the State of Connecticut Department of Environmental Protection was able to acquire the 591 acre Camp property through a Recreation and Natural Heritage Trust Fund Grant. It was dedicated as an historic state park in 2004.

Today: Camp Columbia State Historic Park is one of Connecticut DEP’s most recent park acquisitions. As such its public access and recreational opportunities are still being developed.

Every new state property undergoes a period of evaluation to determine the best public use based on its location, past history, resources present, access, and other factors. Based on this scrutiny, twelve per cent of Camp Columbia’s 599.99 acres became the Historic Park. Generally speaking, what is now the State Park was Camp Columbia’s main Campus, including the building locations and the frontage on Bantam Lake. State Parks are typically meant for preservation and recreation. Although there are exceptions, there are usually no active resource management programs, such as timber harvesting and hunting, in State Parks.

Currently, work is being done on an interpretive trail system throughout the park to convey to the public the deep and interesting account of this fascinating and historical piece of land.

See? I told you this place was pretty cool. (Except for the Giants practicing there.) I was also somewhat unaware of the state’s special “historic park” designation so I looked it up. The list makes perfect sense except for the fact that Camp Columbia isn’t on it. 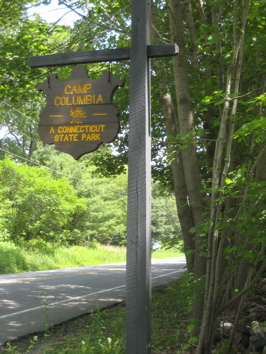 It’s kind of cool that the state park/forest has a tract of land extending north of route 109 to gain some Bantam Lake frontage. I hiked from the main entrance to the tower and poked around the woods a bit as well. There are a couple buildings still standing but I didn’t see any remnants of a football field or wartime trenches.

I did see an incredible amount of poison ivy though, for what that’s worth.