I hope you enjoy a new (2017) series of interviews with some of the people who make Connecticut what it is.

Lasting Brass Brewing Company opened in the Old Pin Shop in the Oakville section of Watertown on December 3, 2016. It is a small operation at only 3 barrels and is currently only open on Saturdays – I’d expect that to change soon enough. For more than a decade, Waterbury native Ed Silva homebrewed some of the best beers anyone could find in southern New England. From the required hop-forward IPA’s to creative holiday stouts to multi-year barreled sour projects, Lasting Brass was always one of the to top “Dude, you’ve gotta go pro” operations around. Lasting Brass is now licensed and open to the public. I talked with Ed about what it took to get to this point, what he’s planning for the future, and everything in between. 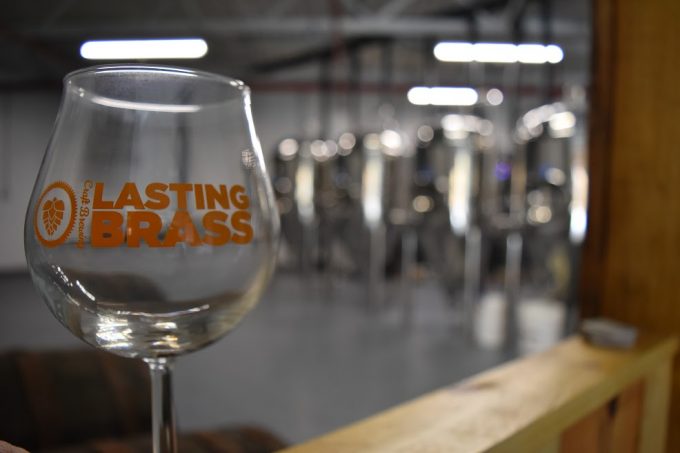 CTMQ: Lasting Brass has been open about two months now. How’s it going?

Ed Silva, owner and brewer at Lasting Brass: It’s going well! I’m getting used to the equipment and getting a lot of support. Things will hopefully only get better in the spring when we can move to more bottling among other improvements.

It’s pretty amazing that such a young brewery with no professional pedigree is flowing from some coveted tap lines around Connecticut. Where have you been on already?

Like I said, the support has been awesome. We’ve been on tap at J Timothy’s (Plainville), Birch Hill Tavern (Glastonbury), McLadden’s (West Hartford location), and the Beer Collective in New Haven.

I’m blessed that it’s going well. I know how hard it is to get tap lines and other breweries are really pushing to get on there. I mean J Timothy’s! I almost can’t believe it. The Beer Collective has an AMAZING tap list. It’s crazy. i’m just very appreciative. 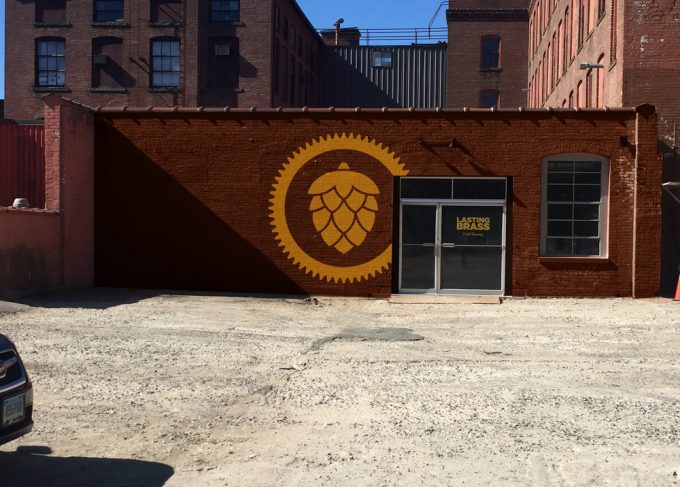 How early did you start to think about opening a licensed brewery?

At least 3 or 4 years ago. My wife and I have full time jobs, a son, and other responsibilities so we took it slow and we were never 100% sure it would happen. When the opportunity presented itself it was just the right time. After looking around in Waterbury for a long, long time, nothing seemed right there. But when we found the place we’re in, everything clicked.

How much of your branding, say, 3 yrs ago was done with an eye towards today?

That was more my personality than anything else. It was fun and cool to do that. Lots of homebrewers name their own breweries. everyone knowns that “Lasting Brass” comes from Waterbury’s history, but it’s more than that to me. The name pays respect to the old school breweries and the brewers who paved the way for guys like me. Lasting Brass is an homage to those people and I have tons of respect for them. They were able to mold and to hold people’s palates with locally made beer and I’m thankful for that. 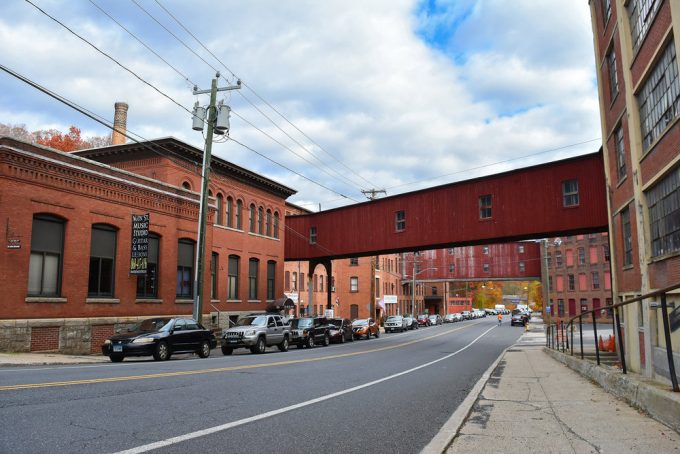 You’ve got “Dirty Water” in your veins. Not only were you born and raised in Waterbury, but you still live there with your wife and son. Most of your beers over the years have been branded with Waterbury in mind. Will that change now that you’re located 20 feet over the border and officially in Watertown?

I’ve thought about that a lot. We thought about changing the name, but we’re happy with the way it is. After all, “Clocktower Pale Ale” is named for a monument that’s known all around Waterbury – in Watertown, Middlebury, Naugatuck… Everyone knows these Waterbury monuments, so we’re cool with it. We try to have people think about the history of Waterbury with what we do.

The Old Pin Shop building we’re in was actually always part of Waterbury. And I heard that it was just three or four years ago that the towns did a land swap and the building I’m in was swapped.

That may sound crazy, but it’s true. Here’s Watertown’s initial talks about the land swap in 2009. 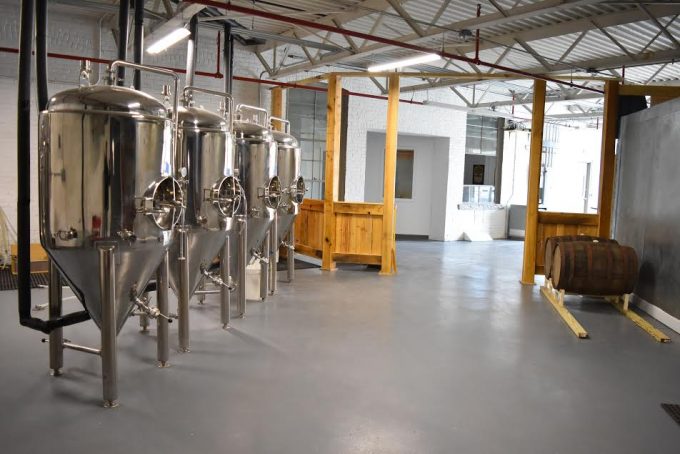 Can you talk about the “Two Moons DIPA” naming controversy?

For some background, I wrote about the beer and its namesake in 2014. Ed was contacted by someone with concerns regarding the native American community. Yes, Connecticut double IPA fans, this situation bears resemblance to New England Brewing’s Gandhi-Bot kerfuffle. If Ed does change the name down the road, don’t give him crap for the decision unless you personally own a small business that was 100% self-funded and has also been the subject of a similar controversy.

We got a little bit of flack – even as a homebrewer. But we’re going to brew it again and see what happens. My naming the beer after Chief Two Moons isn’t to idolize him or even to state a positive or negative opinion of the guy. It’s merely to alert people to the history of Chief Two Moons and what was going on back in historic Waterbury. It’s a super interesting story and we’re in no way trying to disparage him or Native American culture. There’s some question as to whether he was even a Native American at all which is interesting on its own. We’re just really trying to get people interested in local history.

And the label art is pretty rad. 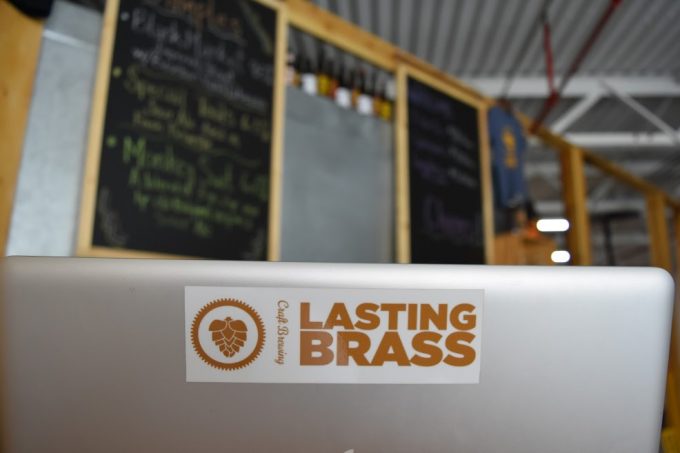 What are your plans for the remainder of 2017?

To get some more draft out, to add accounts if we can, some bottle releases, some barrel releases. We have 6 barrels right now… mixed fermentation/sour beers. We’re just letting them age. One is a mixed fermentation saison called Quid Aere Perennius (2015 CTMQ review, A+) that we’re bottling soon – once the Brett does it’s thing.

Your fruited beers are phenomenal. Do you do anything differently to impart more fruit flavor than perhaps other breweries do? Can you explain your approach to your fruited sour ales program?

Will you have that time now that you have bills to pay and customers to satisfy?

(Laughs) These beer styles take time and we hope to be able to build up a barrel program where we don’t have to rush things and to let the beers tell us when they’re ready. I’m using many of the same yeast strains I used at home for the last few years – one is a strain cultured from my mothers garden; we’ve been able to pitch it into a couple barrels and I’m very happy to keep that one going.

I will have to use more fruit puree rather than fresh fruit picked at the orchard at this larger scale. It’s easier to use; readily available, and comes in larger volumes. The finished product isn’t impacted. If it was, I wouldn’t use the puree. 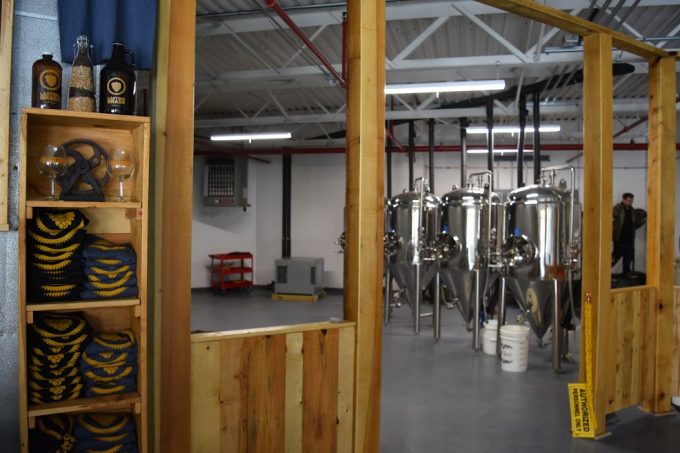 Are you doing Connecticut Hops for Hope this year?

I would love to be able to part of that! In fact, I may have something special in a barrel for it already. If I have the opportunity it would be one of the festivals I’d love to do. After opening a brewery, I get asked all the time to do events. It’s crazy; we’ve only been open for like 7 weeks! It’s tough, because we want to be able to do some of these events, but we just don’t have the time to do them. Most people don’t realize I still work a full-time job during the week.

One last question that I know is weird, but I also know that people have wondered but just have never asked. Would you please explain to the world your noticeable limp and what caused it?

It’s funny, hardly anyone has ever asked me about it, but I’d talk about it if they did! I was diagnosed with cancer when I was 21. I had to leave my senior year of college at UConn. It’s a very rare form of cancer called osteosarcoma and it was in my right thigh. I don’t talk about it all the time because I’m not looking for sympathy – especially when trying to start this business. I wanted to be “Ed the brewer who makes good beer,” not Ed the cancer survivor.

At first, because I was 21, I was angry and telling doctors to ‘f off’ and that I just wanted to keep playing hockey. 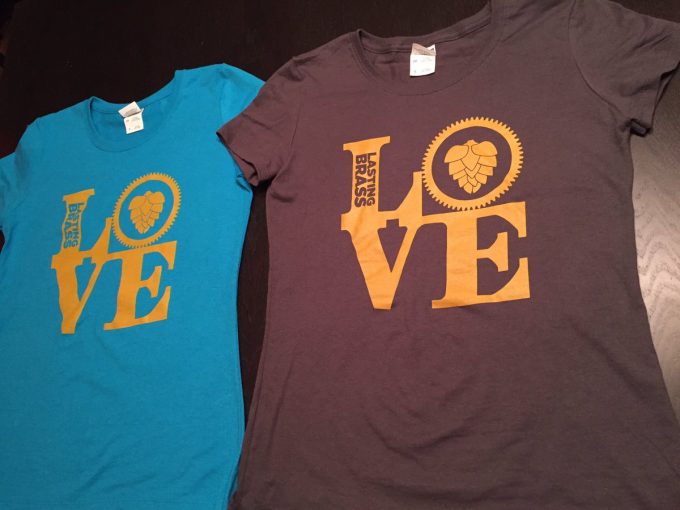 But it was stage 4 and they found that it had moved from the bone in my thigh to my lungs. I had tons of surgeries and we decided to amputate my right leg. I have a prosthesis and try to do everything everyone else does. It drives me, it makes me more hungry to do the same stuff everyone else does. It’s a personal drive; not based off of anything I’ve heard anyone say, but I tell myself that if someone thinks I might not be able to do something because of my amputation, I want to do it.

I was really lucky. I’m cool with the story and I limp around and people notice it. I just don’t want people to feel bad for me. I just want them to enjoy my brewery and my beer.

Sounds good to me. 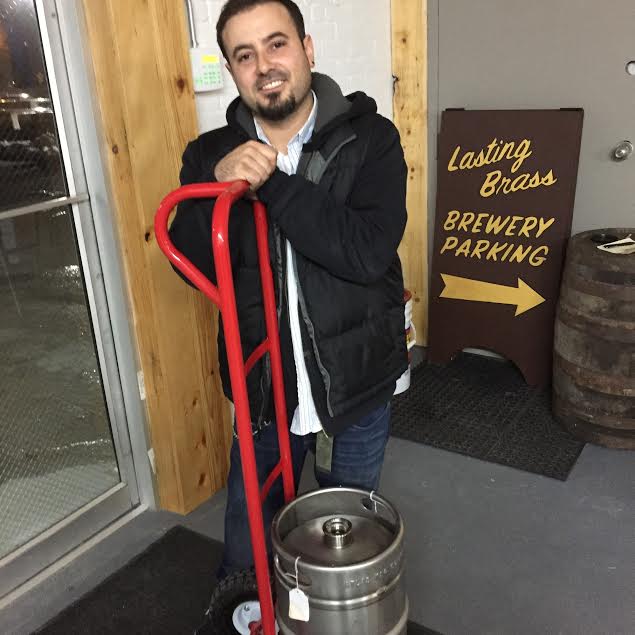 Here are my reviews of Lasting Brass beers. Most of these are from the homebrewing days, but it appears that many will continue on, with the same recipes, at the brewery. Check out some of those beers for a preview of what’s to come.

Lasting Brass is located at:

Huge thank you to Ed for talking with me. Get out to Lasting Brass for some of the best beer in the state. And thanks to Chris Krieger for a bunch of the photos.