CTMQ > Everything Else > Geography > Deepest Natural Lake in Connecticut

My three minutes of Internet sleuthing did not yield the native American derivation of Wononscopomuc so I’m thinking it must be a modern portmanteau. How about “Wood, none so cared or put out much?” (My last name is Wood, for those of you who don’t know.) But what the heck, when you spend a morning traipsing all around beautiful Salisbury hitting most of the geographical extremes in town – there are a whopping SIX in humble Salisbury – you simply must make a stop at our deepest lake as well. If not, you’ve only failed yourself.

It was originally called Lakeville Lake. Which is stupider. But at least now you know why this part of Salisbury is the village of Lakeville. Surrounded by that village, the 353-acre Wononskopomuc Lake is a fairly circular lake divided in half by a north-south ridge running below the water’s surface. The western basin holds a maximum depth of 106 feet. The eastern basin has a maximum depth of 60 feet, leaving Lakeville Lake with an average depth of 36 feet. Underground springs feed the lake along with surface water from Sucker Brook and two unnamed streams. 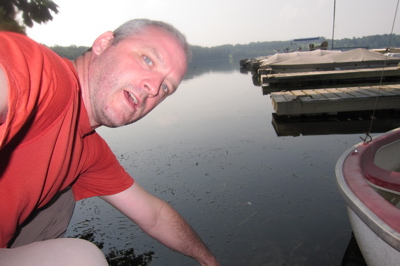 Unless you want more… Much, much more. Firstly, the lake is now a beautiful recreational area open for boating and fishing and there’s even a nice little beach and what appeared to be, from a distance, a large and modern building to hang out in. I didn’t feel like paying the 10 bucks to park and find out for myself.

As with everything in Connecticut, there is a long and rich history associated with the lake. Lots of cool little tidbits from the last 200 years here. This, from Wononscopomuc.org:

If you had lived on Lake Wononscopomuc in the eighteenth century, you would have had a hard time picturing the idyllic environment we enjoy now. The township of Salisbury was first settled by three families who came over from New York about 1720. Then the area was known as Weatog or “the wigwam place.” A town was created in 1741 and was called Salisbury although it is not clear whether the name was derived from a town in the English Wiltshire or after a Mr. Salisbury who lived not far from the center of town.

The lake was a prime industrial site. To the West an iron ore pit had been dug and the ore transported by horse drawn cart along what is now Route 112 to Lime Rock where a forge was built between 1732 and 1734. In 1748 a small forge was established at the outlet of what is now factory pond and the village there became known as Furnace Village. In 1768 the property was purchased by John Haseltine, Ethan Allen and John Forbes and remodeled into a blast furnace. The fuel was brought from the nearby mountains where trees were cut down and burned in pits to create charcoal. The bellows were driven by water from the lake which had been dammed for power. And our lake became known as Furnace Pond. While Ethan Allen left for Vermont to form the Green Mountain Boys and later lead the attack on Fort Ticonderoga the foundry belched smoke and soot for over 80 years. During the Revolution it produced some 800 iron cannons. 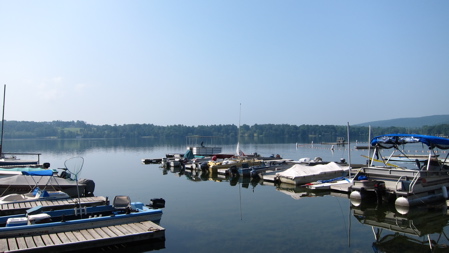 Then in 1844 Alexander Hamilton Holley established a new industry at the lake. The Holley Manufacturing Company made pocket cutlery. Hence, we now have Pocket Knife Square at the entrance to the Town Grove. In 1856 Holley was elected Lieutenant Governor of Connecticut and in 1857 took over as Governor. He served for two years. Then in 1854 he built the large Italianate or Venetian style home on Millerton Road that he called Holleywood. (It used to be a museum) He designed it himself and the stones for the foundation were dug from the ground between the house and the road. The depressions remain to this day and form the vernal pools that provide a home to certain creatures in the spring.

By the second half of the 19th century Lakeville had a growing economy with the iron industry, a thriving farm population and a number of schools such as Dr. Henry M. Knight’s School for Imbeciles and the Taconic School for Girls. (now the Wake Robin Inn) In 1871 the first railroad trains steamed along the western side of the lake on their way from Hartford to Poughkeepsie.

Wait, what? School for Imbeciles? Actually, it was fairly groundbreaking and not as bad as it sounds.

The line was never really profitable. It became the Central New England Railroad. It turned West toward Millerton over what is now called Old CNE Road and you can still see the track bed on the west side of Indian Mountain Road. The trains not only carried coal, goods and farm products, but they also brought city dwellers. Hartford was only a three hour train ride away. 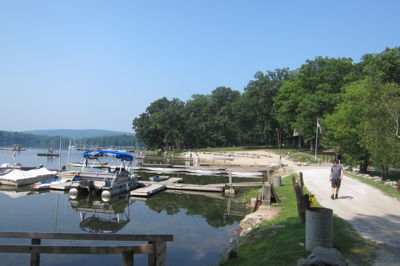 Fairs became popular as well as huge picnics such as this one for the Masons in 1883. 7,500 people came to celebrate the Montgomery Lodge Centennial. By now Lakeville Lake was becoming a recreation attraction.

The area on the lake just below Holleywood and across Factory Pond became known as Holley Grove and was a favorite location for picnics, boating and swimming. However, it wasn’t until 1848 that town officials changed the name to Wononscopomuc.

By the late 1940s the Holley family rented space to a concessionaire who sold small foodstuffs, bait, tackle and other sundries. In 1947 the town was given part of the Factory Pond property. The town purchased the Holley Grove in 1951 after three years of negotiations with the Holley Family.

Okay, NOW you know all you’ll ever need to know about Lake Wononscopomuc.