2018 Note: This description is very old. Things have surely changed! In fact, this trail may be a re-do for me when I explore the wider range of the Nehantic State Forest.

A hot and muggy July Sunday with nothing to do – why not take a short little hike to knock off one of Connecticut’s blue trails? That’s what I always say anyway. With very little planning and no forethought, I got Hoang’s blessing, filled up a couple of water jugs, grabbed some sunscreen, pocketed the CT Walk Book’s trail map and description, and hit the road. Although the weather was pretty nasty, I was as happy as a clam. 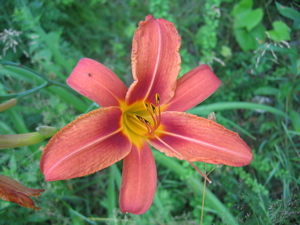 And anyway, since I would be down near the Long Island Sound, it was sure to be cooler and drier. I made the drive to the shoreline in relatively short order and took the very scenic 156 North from Old Lyme to Keeney Road, per the Walk Book’s instruction. DO NOT DO THIS unless you have four-wheel drive truck. The CT Walk Book doesn’t bother to tell us that the few miles to get to the trailhead were over a cratered and washed out dirt/sand road. I’ve taken the Jetta on some pretty crappy roads before, and the first couple miles of this one weren’t that bad. After the turnoff road down to Uncas Lake, however, things took a turn for the worse.

[9/22/07 Update: Chris the caretaker has emailed me to note that the state has regraded this access road and it’s fine for small German car travel.] 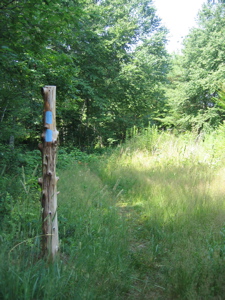 I rounded a bend and was faced with a moderate uphill, but with essentially no road. Oh sure, it used to be there, but it wasn’t anymore. I reversed, turned around, and gingerly made my way back out to Route 156. Let’s see… there was another approach from the other side of the Nehantic State Forest… North on 156 to Beaver Brook Road in the Hamburg section of Lyme to the other (northern) end of Keeney Road and – it’s paved! Yay. 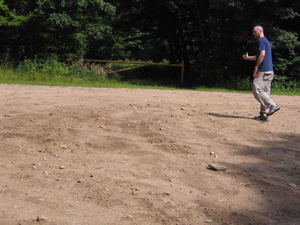 (Don’t be too confused by the town names. I’ve lived in this state since 1991 and have yet to figure it all out. There is Old Lyme, East Lyme, and Lyme which are towns, whereas Hadlyme – and Hamburg – are not.)

The pavement did end eventually, but it was easily drivable and only a short way to the parking lot at the trailhead. I parked, gathered my water bottles, camera, map, and bandana and hit the trail. Having lost a good amount of time futzing around with the drive, I took off nearly jogging. I’d be completing the loop trail in a clockwise fashion and whoa! Look at that massive glacially deposited erratic boulder! 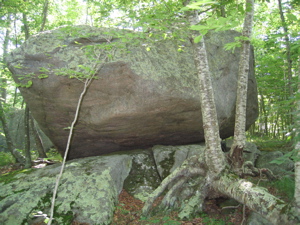 I think they call this Chipmunk Boulder

That was a pretty cool surprise. It happened so fast I haven’t even painted the scene yet. First of all, the “Nayantaquit” was an Indian Tribe who inhabited the area. I’m totally guessing but I wouldn’t be surprised if the CT town of Niantic came from the same tribe’s name. The trail wends through the Nehantic State Forest which is maintained by the Forestry Division of the state DEEP. It is an experimental forest where the state uses controlled burns and studies the reforestation.

More interestingly, the Nayantaquits also lit controlled fires several hundred years ago for their own purposes. By ridding the understory of all the junk and deadfall, the Native Americans allowed for fresh green growth for game to graze on as well as improved visibility and travel. The Nehantic State Forest gives us a glimpse of the pre-colonial forest. Of course, it pretty much looks like a white oak, hemlock, pine, and hickory forest to most passers-by. But in fact, a professor from Connecticut College and the Head Forester are purposely creating habitat for all sorts of birds, making this place quite the birding hot spot. Back to the trail! 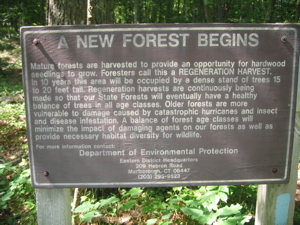 The trail was well-marked and clearly defined. And easy. Sure, it rises a bit here and there, but I was able to maintain a decent 14-minute mile or so pace. The open forest was noticeable when the trail rose away from the low-lying swampy areas. Speaking of those swampy areas, thank goodness a bottle of bugspray was left in the car the day before. And thank goodness I off-handedly decided to bring it because I was swarmed and attacked by various mosquitos and biting flies of some sort. They acted just like the black flies I’m familiar with further north, but I’m not sure exactly what they were. They were brutal; I must have applied the spray 10 different times on the short hike.

[2018 Update: These were surely deer flies and it’s funny, I haven’t put on bugspray in a decade. You just get used to this stuff I guess.]

Near the top of Brown Hill, the trail intersects with some old forest roads. It gets pretty confusing, and with the seemingly endless network of old stone walls, you must remain very aware of the blue blazes. There is a spot marked “ruins” on the map, to which I bushwhacked. It’s merely the foundation of an old house overgrown with summer vegetation; not exactly worth the effort. I made my way back out to the trail and noted there were suddenly green dots in the middle of my beloved blue rectangles. 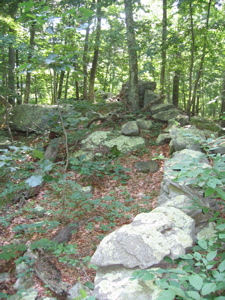 Oops. Wrong trail. No matter – a quick chug back up Brown Hill and I was back on track. Off and on the forest roads a few more times and then suddenly – a pair of Port-o-Lets. I didn’t have a need to utilize the facilities so I merely wondered why they were there and mosied onward, on up Nickerson Hill. All 452 feet of it. 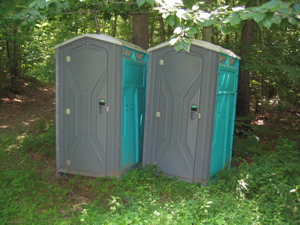 Actually the Nayantaquit doesn’t quite reach the tippy top, but since this little blip on the Connecticut landscape doesn’t qualify for any peakbagging lists that I know of, I left it unsummitted. The trail turned east and approached the first and only designated lookout point on the map I had. I saw a clearing ahead and made a quick walk for it. I emerged from the glade and: 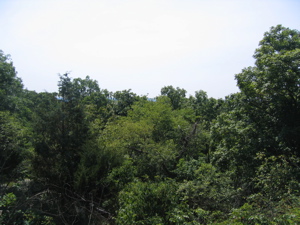 Voila! Tree-tops and a hazy sky! I’m sure on a drier day in the fall or winter, one can see the Sound and perhaps Long Island itself in the distance. I even hopped up on a three-foot high boulder and extended my arm up high for that picture; adding over 12 feet of height from the ground. Oh well, I was still enjoying myself.

The trail continued eastward back towards my car. It pleasantly descended along a ride and then after a short rise, happened upon this: 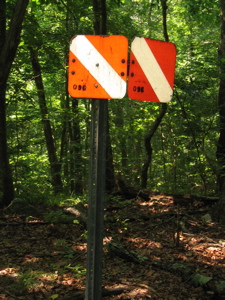 What’s that? Before I tell you, it was about here where things went a bit wrong. The trail continued downhill and the blue blazes were easy to spot. After reaching a flat area, I came upon an intersection of two more forest roads. I stared at a double blue blaze telling me the trail turned right down the dirt road. I turned right and walked. No blazes. I checked my map and noted that I shouldn’t be on a road. I went back to the intersection, saw the double blaze (going both directions, mind you) and poked around. No more blazes. I walked further down the dirt road: no blazes. I retraced my steps, back up the hill a bit… and found nothing but a sign to Nickerson Hill. I went back down. I cursed. 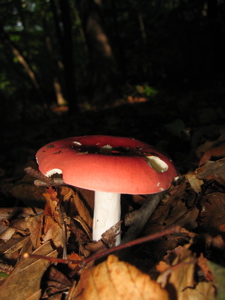 Keep in mind it was now over 90 degrees and I was not going to finish in an hour like I’d hoped and I’d be later than expected and – where the heck was I anyway? I walked down the road again because, despite the lack of any real topography, there was enough to tell me I was headed in the right direction. The best part was that the biting fly population increased 10-fold along this section. Huzzah! In short order, I saw the glint of my car up ahead – which I now had to race like a speed demon back home to make up for lost time. 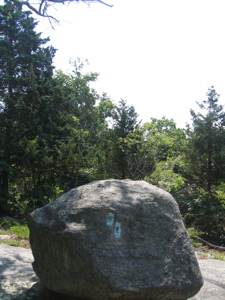 So… where did things go wrong? Had I been a diligent hiker, I’d have gone to the CFPA website whereupon I’d have read this, which also tells me what that strange sign in the woods was in the picture above as well:

The following revised text addresses a potentially confusing section on the eastbound Nayantaquit Trail between Nickerson Hill and the northern end of the Crossover Trail. The Pipe line shown at the top of the map on page 99 was drawn in error and does not exist. Text changes between mile 2.0 and 2.8 and to the mileage matrix are included in this revision.

The hike: The Nayantaquit Trail begins just beyond the gated park service road …

Continue following trail east past vista. Reach orange and white National Guard orientation marker (2.5).and turn sharply right (south). (Straight ahead a spur trail, also blazed blue but not shown on the CFPA map, leads to a three-way intersection of forest service roads, at which point the blazes end. Following the road that heads in an easterly direction leads about 0.6 mile to the northern Keeny Road parking area.) Descend steeply on main trail, cross two forest service roads, a brook on puncheon, and another service road. Reach northern junction with blue/yellow-blazed Crossover Trail (2.8), which goes right (south). Continue to end of loop (3.2) and turn left (northeast) to trailhead (3.4).

Dangit. Oh well. I hiked the same distance and didn’t miss anything other than a puncheon, which I’m sure is nice, but I’ll survive. I consider myself a Nyantaquit Trail completer, as I did follow the blue blazes as far as I could. Regardless of my error, I must say that for a rarely hiked trail, it was in great shape. There was almost no trash (just a little at the parking lot) but – hey, Chris, about those misleading blazes I followed? And hey me, if it was so hot and humid, why did you wear pants? 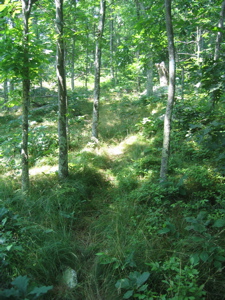 Um, gee… I was in LYME and walking through many sections of tall grass. I suggest you do the same.

I did a lot of post-hike reviewing and I missed the sharp right turnoff in my ill-advised haste and followed different blue blazes. It counts. One down, lots more to go. I enjoyed my outing despite the difficulties (bad road, bad bugs, bad humidity, bad view, trail confusion) and had a lot of fun. And Chris – thanks for all your hard work on the trail! 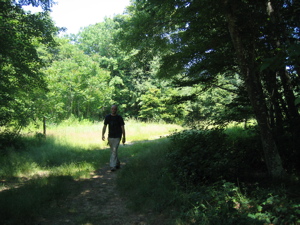