This property is probably the most interesting of the 19 along the Underground Railroad route. There is a ton online about this property – the best of which I’ll copy and paste here. I had mentioned to a knowledgeable woman that I was planning on going here for lunch and she told me that it was no longer open. I was a bit surprised because there is nothing online telling me so. 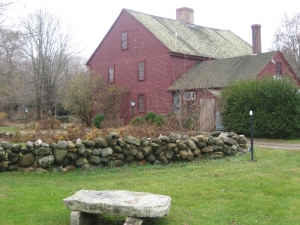 Turns out, the local Mashantucket Pequots bought the property and don’t publicize that fact. Who knows what they’ll do with the place; but let’s hope they don’t change the character of it. It’s really very pretty and set off the busy Route 2 (busy thanks to those same Pequots and their teeny little casino a few miles up the road) and as I said, has a rich history.

Coming to the new world with his family in 1667, John Randall II was part of a very prominent family. His uncle, Sir William Morton, was a founder of New London, and his grandfather, Matthew Randall, had served as Lord Mayor of Bath, England. In 1680 John Randall I purchased land in North Stonington and five years later Randall II built his home, now known as Randall’s Ordinary. The farmstead stayed in the Randall family for more than 200 years, yet deteriorated with time.

In 1926, a man named Harvey Perry purchased the property and restored the farmstead to its original condition. It wasn’t until 1987, after the property had been sold to Bill and Cindy Clark, that Randall’s Ordinary opened for business. Very knowledgeable in colonial customs and culture, the Clarks ran the inn, providing the effect that guests were traveling back in time 300 years when they entered the homestead, and in some ways they were. 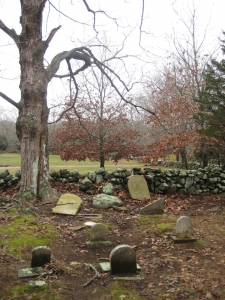 Dinner at Randall’s Ordinary in North Stonington was a unique experience, as close to dining in Colonial times as most of us will ever know. The dishes served are from authentic 18th- and 19th-century recipes, and most are cooked in the fireplaces of three small, low ceilinged dining rooms with exposed beams.

When guests called to make a reservation, they were told that drinks will be served from 7 P.M. until about 7:45 P.M., when dinner begins. At the restaurant, they were cordially welcomed by a waitress in a long skirt and mob cap who invited them to wander through the house, peer into the three guest rooms upstairs (Randall’s had a total of 12 rooms for overnight guests, with the additional nine in a reconstructed 1890 barn nearby) and order drinks in a small tap room in the rear.

By all accounts, the food was excellent and the experience certainly worthwhile. As far as the Underground Railroad, slaves were hidden here on their way to points north. Had it been open, I’d have been able to ask to see the secret hidey hole near the kitchen. Oh well.

The road to the buildings is in terrible condition – but it’s still cool to wander the grounds.