2019 Update: These eastern Connecticut trails are a mess. I say that with love, but writing about them in a way that is readable is difficult. I have completed the short newer stretch out to route 14A, but I still have a mile to do west of Breakneck Hill Road. When I do that bit, I’ll just add to the bottom of this page. 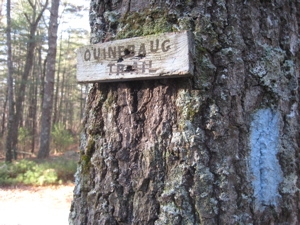 I never meant for this trail to be broken up over three hikes.

If you are familiar with the cobweb of CFPA trails in this part of the state, you know that hiking them all solo presents some logistical challenges. If you are familiar with me, you know I welcome such challenges. And I had this one all worked out in my head before setting foot on the trail. Unfortunately, some rogue hunters forced a change in my plans along the way. I’m a wimp like that. 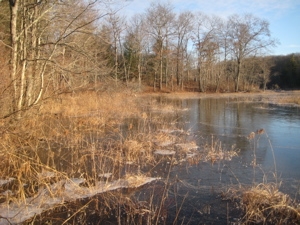 The day was still successful, as I was able to hike a larger chunk of the connecting Pachaug Trail than I had originally planned.

I’ll make this unnecessarily confusing of course. Normal people would hike with a partner and two cars and be done with it. I, on the other hand, wake up well before dawn, slink about the house as quiet as an ant (we’ve had mice in our attic and walls… they aren’t all that quiet), and head off alone to most efficiently hike an end-to-end trail.

But heading out early means I get to sometimes see things most others don’t – like a pretty sunrise over Route 2 for instance: 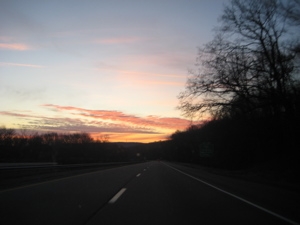 That also means some creativity is in order. I hopped off of I-395 and traveled down Route 14A to Spaulding Road. I parked at the trailhead and suffered some initial confusion because the blue blazes continued across Spaulding Road. However, I just read that this is an access trail that goes to a larger parking area a short distance away. 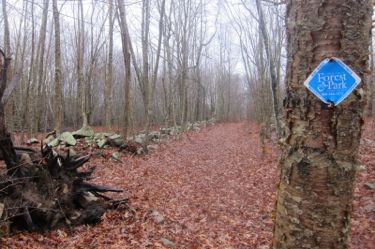 Okay, this is 2013 Steve here. I returned to the Spaulding Road trailhead and decided to walk that “access trail.” While the Walk Book and the new CFPA online map tool do not include this half-mile northern extension, I’m going to guess they will some day. I mean, why not? The trail is beautifully cleared, takes in some really beautiful pine forest and ambles over a bunch of cool old stone walls.

2019 Steve can confirm that the “access trail” from 14A is now official Quinebaug Trail, so that’s where we’ll start. 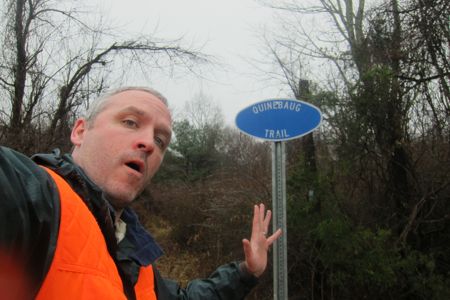 Once off the wide road, the trail enters a bramble maze which nearly hides an old crumbling house. As this was a rainy, dreary November day, the ruin looked rather creepy. Like, horror movie creepy. 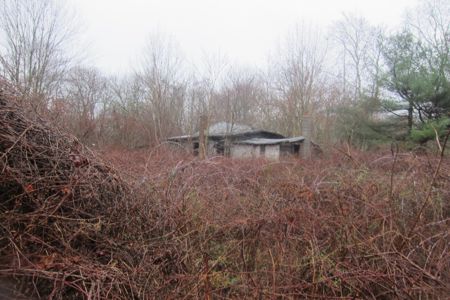 Continuing on through this first flat section, the trail skirts the rear of some private properties, one of which seems to have some sort of arboretum going on. They weren’t Christmas tree trees, but there were a ton of them, all planted in rows. Oddly creepy too. I can’t explain why.

Here it is on satellite. After that comes the jaunt through the pines which is something I’ll never tire of. In a rain, it’s just so quiet and piney and soft if that makes sense. (I know it makes sense to hikers, so there.) 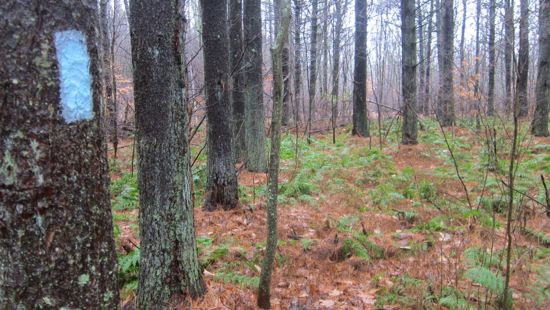 I soon reached the Spaulding Road crossing, which is where we’ll pick up our 2008 story…

Now why would this trail require a larger parking lot? Oh maybe because these woods – the Pachaug State Forest – is a hotbed for hunters. This being a Sunday, I wasn’t too concerned, as hunting is explicitly illegal on Sundays in Connecticut. Then again, perhaps the scene that greeted my initial steps along the trail were an omen: 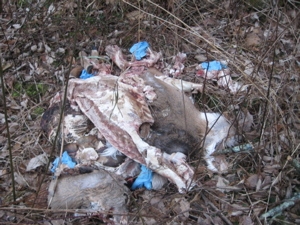 Nice. At least it was frozen solid and didn’t stink. The Walk Book describes these first couple miles as potentially muddy after rains. I can confirm that is entirely true. While mostly frozen, I still had some difficulty picking my way around and over and through the frozen pools of water along the trail. 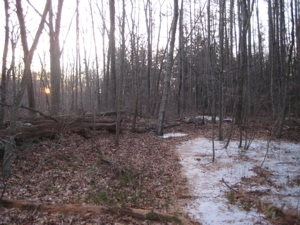 The trail is very flat and fairly unremarkable for the next mile or so; passing more dilapidated old stone walls and hunter stands. With all the hunting here, there wasn’t too much ATV damage or litter.

After a short downhill, the trail turns south to the shores of Lockes Meadow Pond. This area is said to be a great birding area but I didn’t see all that many birds of interest. Of course, that may be because I’m not a birder. Or because I was confronted with a rather difficult situation shortly after walking the shore for a short way. And what would that be? 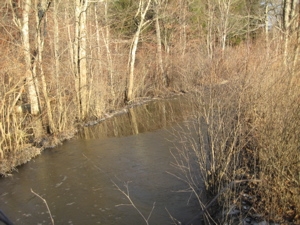 Hm. Interesting. Unprotected by trees to the east, this 200 yard long stretch of trail was completely underwater with only a thin layer of ice coating parts. To the left, the Pond and thick stand of scrubby bushes made it impossible to pass. To the right, a large half frozen swamp stretched as far as I could see. 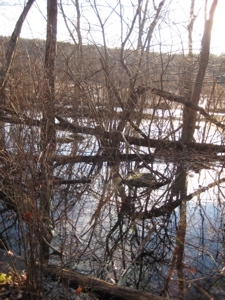 I bushwhacked around the swamp, hopping from hummock to hummock but determined it would take me forever to do it and remain dry. And since I’d be returning this way in short order, it really didn’t make sense to continue.

I turned tail and retraced my steps back to my car on Spaulding Road. 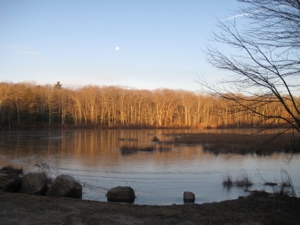 The crossover trail is blazed blue and yellow and is somewhat interesting. I had to contend with a lot more ice/ponding which makes hiking much slower than I prefer. There are lots of streams here too that feed Hell Hollow Pond. Here I am on a dry section of the crossover:

Soon the crossover trail became an old woods road and hit my friend the Quinebaug. I veered right down a hill and was quickly at Lockes Meadow Pond again, this time approaching from the south. The land nearest the pond was still impossibly impassable here too, so I again tried to bushwhack around the frozen(ish) swampy area on the other side. 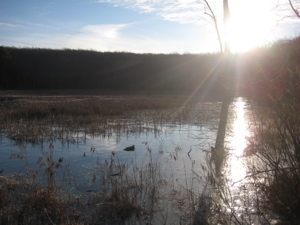 I did this for about 10 minutes and gave up. I wasn’t going to make it to where I turned around earlier and really, who cares. I can’t think of too many people that would have made the effort I just did, so I turned back south and was pleased with my attempt. 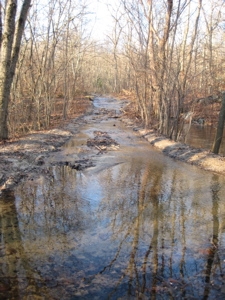 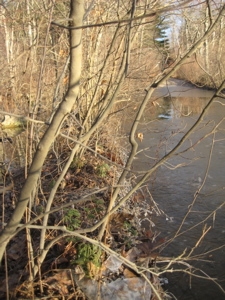 Just past the crossover trail I had just hiked, on the left hand side of the trail, is Devil’s Den. It’s a bit further along than the Walk Book map shows, but it’s pretty easy to spot from the trail. I was a little underwhelmed by this particular den of the Devil, but you can Read about the evil spot here. 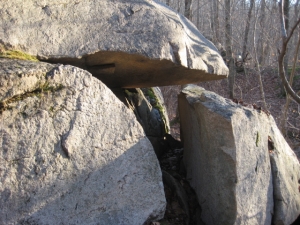 Once back on the trail, I thought the thin frozen layer of ice over the exposed rock trail was cooler than the rock pile of Devil’s Den. See, look: 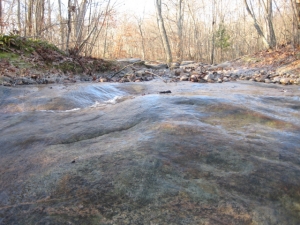 Of course, this made the walking somewhat treacherous, but I survived. Survived to get to the only true viewpoint of the day, which was nothing more than a rock overlook, but it was a nice diversion. 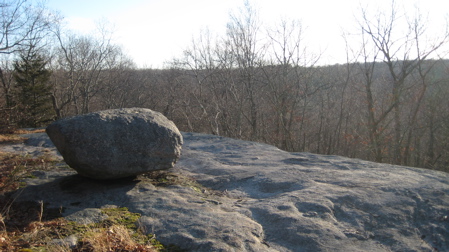 Back on the trail, which now continued along the exposed rock “road” which was really neat from a geologic standpoint. 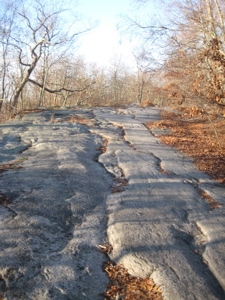 This section of rock is an extension of sorts of Flat Rock Road up a pace – gee, I wonder where that road got its name? Once I reached the drivable portion of the road, I hiked very near a rather camouflaged house. Can you see it in this picture? 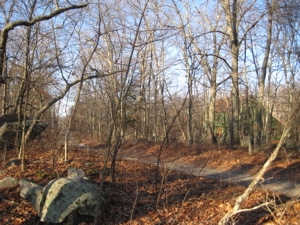 Okay, but will you be able to see it come summer? Just past the house, more geologic fun! 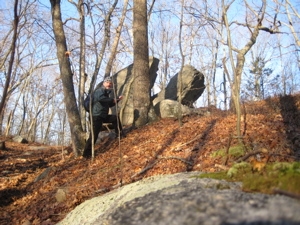 A short descent, a quick ascent, and then some good flat hiking… along another ponded/iced-covered length of trail: 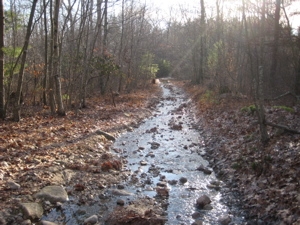 That picture really isn’t all too bad; but I’d entered the true portion of the woods known as Hell Hollow! I wonder if there would be spooky demon-haunted cellar holes? 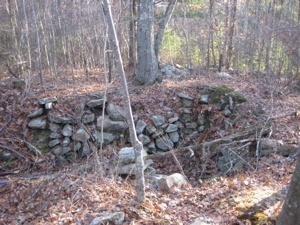 The trail continued along, heading towards Hell Hollow Road and I had just become comfortable being able to discern frozen/walkable stuff versus frozen/not-walkable stuff when I crunched over a ponded area covered with leaves and… 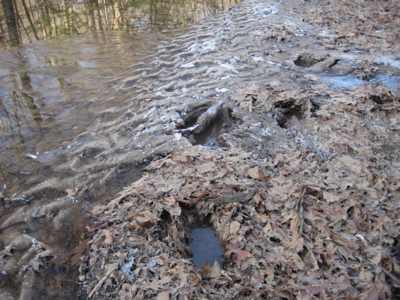 Yeah, those four large, deep holes are my footprints.

Sigh. That was lame. Ice cold mud in my shoes with miles to go. I hit the road shortly thereafter and my fear of its name can be seen on my face: 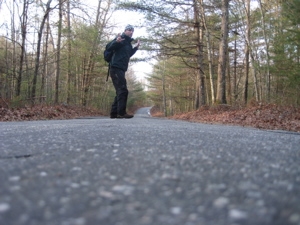 The trail quickly dives back into the woods, which were now decidedly white pine. I love hiking through pine and hemlock. It smells better, it sounds better, and I think it looks better too. Of course, it’s also much darker at nighttime than a deciduous forest – hence the silly “haunted” rumors of this area.

(Sadly, three weeks later some guy murdered his mom and dumped her body here, then went to blow up his house in order to kill himself but only succeeded in blowing himself out into the yard.)

The trail circles around a hill and then dives through a lot of young pines just before crossing into THE Hell Hollow. Here I am, terrified of the ghosts and goblins about to get me: 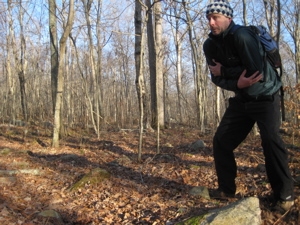 In truth, I was scared in this area. I’d been hearing gunshots louder and louder as I hiked south. Of course, repeated blasts meant I was near a shooting range – no big deal. Then I heard what I swore was a much closer gunshot but convinced myself I heard incorrectly.

The trail parallels very near an open forest road. At one point, two guys in full camo rode up the road on an ATV. They were too far away for me to see if they actually had guns, and I’ve been told hunters like to scout the area to plan a future hunt. That very well may have been the case, but I was sufficiently spooked – even if it was a non-hunting Sunday. 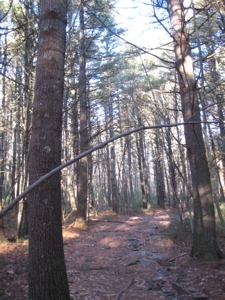 I was very uncomfortable to say the least. I checked my maps and felt the best decision was to cut over to the Pachaug Trail (via the Quinebaug-Pachaug Connector, of course) and head back up north to my car. It made me feel better to walk away from the gunshots.

So that’s exactly what I did. This left a 0.9 mile last bit of the Quinebaug left to do, which I will do at some point in the future.

The crossover trail was completely uninteresting, except for Phillips Pond picnic area and the fact that there are apparently now two crossover options to the Pachaug – a northern one and a southern one. 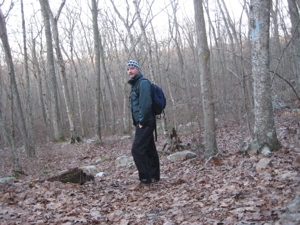 I ended up hiking a lot more of the Pachaug then planned, which you can read about here. Also note that my hike of it ended with animal bones too, which sort of completed my day after the dead deer at the beginning.

Sorry this page is so confusing.