CTMQ > Everything Else > Religious > Sanctuary of Love (RIP) 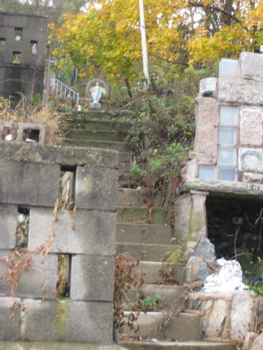 Unfortunately I was a little late to this odd attraction. I’m still including it because it still exists to a large degree and because, well, because it’s still a Connecticut curiosity.

After the Hell Hollow area in Voluntown earlier in the day (on my way to talk at the New England Museum Association conference in Warwick, RI), I felt I needed a spiritual cleansing. And what better place than at a yard full of bathtubs filled with religious icons?

Okay, so most of the religious statuary is gone now, sold at public auction a few years ago – but the bathtubs and inscriptions are still there.

This shrine (of sorts) is right on the main road in the Greenville section of Norwich on a busy street. This meant that I felt like an idiot walking around the area of course. Roadside America, which is apparently the only site smart enough to grasp the magnitude of this place, offers a loose timeline of the events. 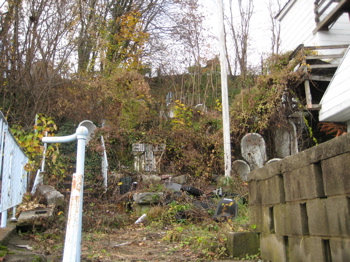 7/25/1998 – There is a house in Norwich that has dozens of bathtubs, with religious statues in them. On the walking paths around the yard, passages about God and faith are etched in the stone.
10/14/2000 – This attraction, which to many seems to be nothing more than an eyesore, will soon be closed down due to foreclosure. An article in the newspaper this past week alleges that the owner owes more than $60,000 in taxes. Perhaps he should have charged for people to look at his bathtubs!
03/16/2002 – Although the welcome sign has been replaced with a condemned sign, the icons don’t seem to be going anywhere, and there’s even someone living in the house on the property.
6/01/2004 – This place has closed unfortunately. The old guy had to go into a nursing home, the city took over the property for the back taxes he owed and they sold all the statuary. It’s a shame… It was so tacky and so unforgettable. The “bathtubs” for the statues are still in place, which gives the place and interesting, haunted look.

Actually the guy who built it all, Salvatore Verdirome, 84, died May 15, 2004. He began constructing religious bathtub shrines in 1971 and while you can’t tell from my pictures, there are still a ton of upright tubs there, nearly nine years after his death.

Oh there’s more on the Intertubes (from The Blog of Death). There were (are?) 47 upended, cast-iron bathtubs. The shrine also included artistic renditions of the 10 Commandments, the Stations of the Cross and the Sea of Glass from the Book of Revelations. 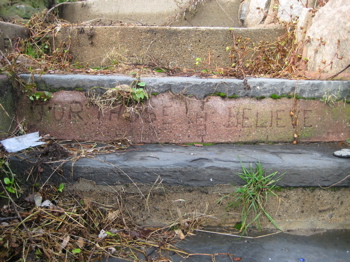 Visitors to the shrine viewed the displays of Jesus, the Virgin Mary and various saints by walking on paths decorated with mosaics and religious sayings. When the Foxwoods Resort Casino opened in nearby Mashantucket, Conn., gamblers made a point of stopping by the shrine to pray for luck – and returned when their prayers were denied. Although Verdirome never charged admission to the Sanctuary of Love, some guests donated money or old, claw-foot tubs. At the entrance to the shrine, he welcomed all visitors with a sign that read: “Your faith has brought you here.”

A deeply religious man, Verdirome used to collect day-old doughnuts and give them to the needy. He also gathered recyclable bottles and cans, then used the deposit money to buy food for local homeless shelters. For many years, he allowed strangers to stay on his property at no charge. In 2000, city leaders foreclosed on Verdirome’s home to recoup $100,000 in unpaid taxes and utility bills. The religious sanctuary was dismantled two years later, and all of the statues were auctioned off.

Verdirome’s life made the New York Times – good article
And his obit made the Boston Globe, so that’s nice.