Back when I started the list of towers and observation decks around Connecticut, a commenter noted that I was missing the Sessions Woods fire tower. I remember my initial thought was that the commenter was nuts. 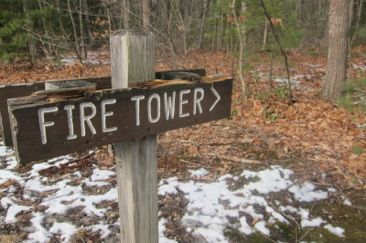 For I had, I thought, hiked almost all of Sessions Woods at that point and there was no fire tower. Perhaps she was thinking about one of the little observation decks or something.

Of course, I checked and she was clearly correct. I had hiked around the Wildlife Management area before, but had simply never been to the far end of the Beaver Dam Trail, past where the Tunxis joins it. 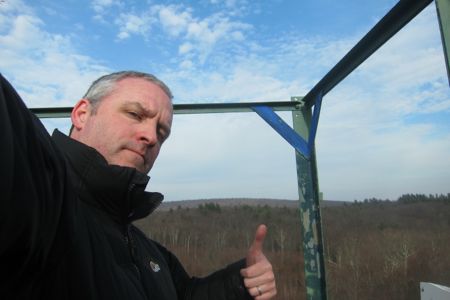 No matter, that simply meant more hiking at the educational and fun property on Route 69 in Burlington; just a couple miles north of downtown Bristol (if you can believe it). I took the whole family there on beautiful fall day, but with the boys we didn’t quite make it around all the way to the tower (or the waterfall, for that matter – though I checked it out myself later as well).

I recommend you hiking all the way around the main (Beaver Dam) trail at Sessions Woods. I want to say hiking it counter-clockwise is easier, but I won’t put money on it. Going clockwise, it’s a healthy and steady climb up from the youth camping area. I did it with hard-pack snow and ice on the ground and wasn’t wearing any microspikes or anything. It was somewhat annoying going up, but not too bad. 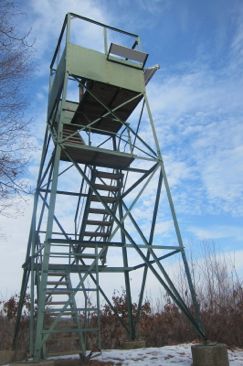 And some old man jogger came by me after I went down a spur trail, but as I walked, I realized he was getting along no faster than I was. I’m sure if there was no snow, he’d have been faster, but as the dynamic played out – that of me walking side-by-side with a guy ostensibly jogging – it just go weirder and weirder. I didn’t want to look at him, but ignoring him felt wrong too.

Finally, after two minutes of this, I stopped to pretend to tie my shoe. I couldn’t take it anymore. 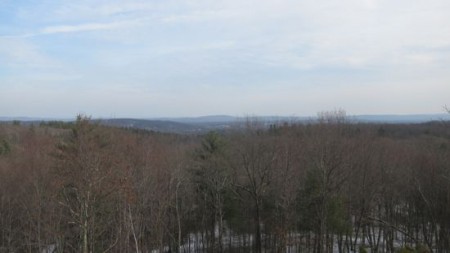 The fire tower is situated at the top of the aforementioned hill. I think its Negro Hill, but Sessions Woods no longer calls it that. Revisionists! The hill is about 750 feet high and the tower is what, maybe 30-feet on top of that?

It’s your standard metal affair, but it seems a bit sturdier somehow than some of the others I’ve been up. And once on top, the views east and south are great. But, as you can see, Sessions tells you what you’re looking at with a handy profile map built into the tower. And that’s cool. (This isn’t unique, but it’s still cool.) 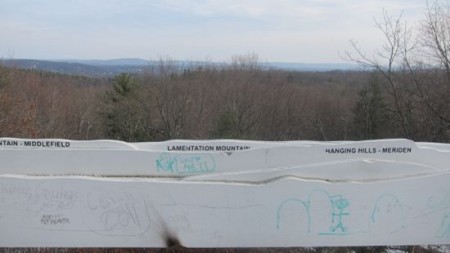 Note to everyone: Almost all of the named hills (okay, Connecticut… “mountains”) can be climbed via various CFPA trails. So don’t just stare at them from the tower at Sessions Woods, go hike them too!

Not the best tower in Connecticut, but certainly not the worst.