As I poke around the state and find more trailed properties that aren’t part of the CFPA Blue Trail network, I’m finding lots of cool hikes. And then there are others that are cool AND historically interesting AND perhaps just a little weird. 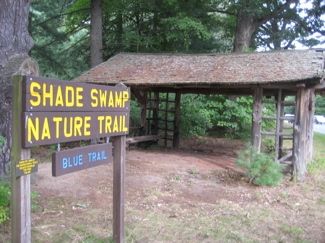 The Shade Swamp Sanctuary trails in Farmington qualify on all three accounts. The trails are not challenging or particularly beautiful at all… But they have a certain strangeness that appeals to me. And so we hike…

I’d passed by the two different trailheads along Route 6 several times, but never thought much about them. Then one day I received an email from a reader informing me of what the woods held: old zoo cages. I made plans and hit the trails on a muggy, mosquito-swarmed day. 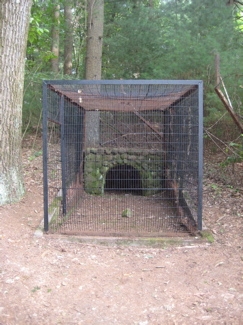 To his immense credit, Courant staff writer Peter Marteka is a CTMQ reader. He is also responsible for writing about the “outdoors” and does a great job mixing up CFPA trails with smaller, lesser known land trust trails and interesting natural areas around the state. He checked out Shade Swamp this fall and I’ll simply post from his original article. Not something I ever really do, but I don’t really see the need to add much to Marteka here.

There aren’t too many places in the state where you can explore the ruins of an abandoned zoo, walk along a kame terrace or eat lunch under a 75-year-old picnic shelter.

Unless you are at Shade Swamp Sanctuary, an 800-acre swath of state land along a busy Route 6. The sanctuary offers two types of havens for its visitors: A blue trail for those looking for a little adventure in their hike, and a white trail for those seeking a nice, easy stroll through the woods.

The sanctuary entrances are located on a busy Route 6 with the property cut in half by New Britain Avenue. This gives visitors the two options, with parking areas for both just off the highway — one to the west of New Britain Avenue and one to the east. The sanctuary is owned by the state and maintained by the Farmington Garden Club. At one time, the club produced a trail guide for the interpretive trails at each location.

I couldn’t find a trail guide either. 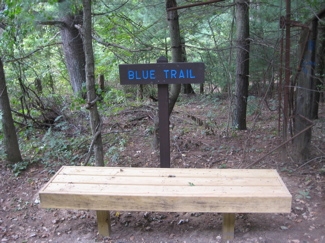 The “Shade Swamp Shelter,” a log and shingle structure, is located at the entrance of the 1.5-mile-long blue trail section of the sanctuary. The shelter was built in 1934 by members of the Civilian Conservation Corps. The structure is also on the National Register of Historic Places. It’s worth a little visit to see the workmanship of unemployed young men during the Great Depression.

It’s really quite cool, but is right next to Route 6. Not exactly an ideal picnic spot. 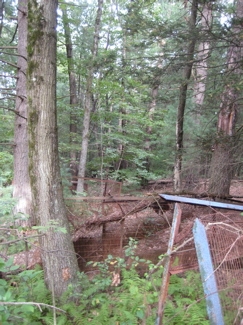 The trail then plunges into the forest as visitors pass the ruins of an old roadside wildlife area that existed here until the early 1960s — a sort of zoo for rare and endangered birds and animals. The workmanship of the stone “dens” within the rusted cages is impressive. The state operated an experimental breeding station and year-round zoo of game birds and animals native Connecticut starting in 1934.

With words like “sanctuary” and “zoo” being mentioned in the 1930s, many people wanted to bring all sorts of wildlife to the area. Monkeys, alligators, bears and parrots were taken to the sanctuary with unfulfilled hopes of finding them a new home. According to a 1936 article in The Courant, the owner of a carnival stranded in a nearby town wanted to leave a young giraffe in the care of the sanctuary. 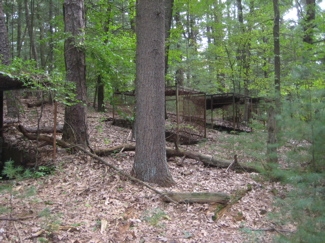 Marteka isn’t being as descriptive as I will be. There are maybe 15 old animal cages/dens and they are decidedly creepy to walk through. I’m sure the animals that lived here 70 years ago weren’t too happy with their small stone homes with chain link fencing. Most of the structures have held up remarkably well over time and they are worth the trip alone. The hike in to see them is only a couple minutes or so, even though there’s a nice little bench to rest on for some reason.

The trail winds its way over a stream and past a fern-filled wetland area. The trail forks, with a loop trail going to the top of some high ground — known as a glacial kame terrace — and then down along the banks of the swamp. The highest point in the sanctuary offers commanding views of the swamp and of Rattlesnake Mountain to the east. 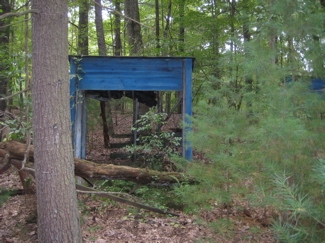 I got torn up by mosquitoes near the swamp. Of course, this isn’t surprising in the least, but it certainly was annoying. And by the way, a kame terrace is a flat-topped mound or hill composed of sorted sand and gravel deposited by meltwater in a former glacial lake. Here’s more.

Anyway, the trek all the way to the swamp is a bit unnecessary, especially since you’re about to go a quarter mile down Route 6 to the other trail where there’s a nice lake to see. Lakes are prettier than swamps. 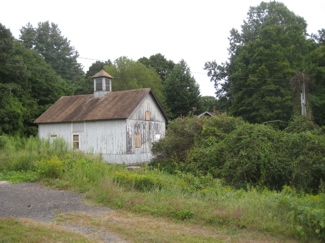 The 2.5-mile-long white trail begins at the former Farmington headquarters of the state Department of Environmental Protection. The trail winds around a picturesque pond and across a rickety bridge into the forest. The scent of pine lingers through the entire loop trail as visitors pass through groves of white pine and pitch pine. The trail is easy to follow without needing to look at the white blazes on the trees and is lined with thick patches of moss.

That’s it? Geeze… Okay, to be honest that really is about “it.” Even though it’s a good 45 minute hike, there’s not much to it. I was more interested in the abandoned headquarters of the DEP. There are many buildings in the complex and I’m sure several of them hold some interesting stuff inside. I defied the “Keep Out” signs (but don’t you do the same. I’m a, um, professional) and walked around the lot for a few minutes. My investigation was disturbed by a woman (hey, didn’t you see the Keep Out signs?) chasing her yappy dogs who were chasing after me. (I survived.) 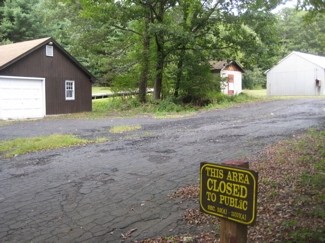 I fast-walked around the lake, swatting mosquitoes all the while. I was rewarded, though, with a graceful blue heron fishing across the water. I watched him in peace for a while before finishing up and heading home.

Shade Swamp is definitely a unique little place to explore. The sanctuary is located along Route 6 just west of the intersection with Route 10. There is a small grassy parking area near the shelter, but use care entering and leaving Route 6. The entrance to the white trail is just west of the junction of Route 6 and New Britain Avenue. 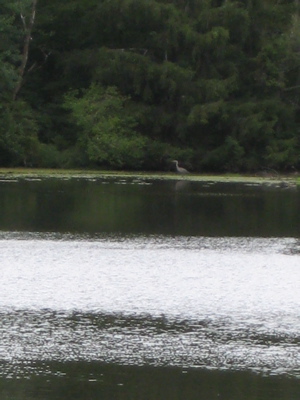