This post is only about the doll shop/museum and NOT the Bed and Breakfast. Also, at some point the proprietors stopped billing this place as a museum – see bottom. 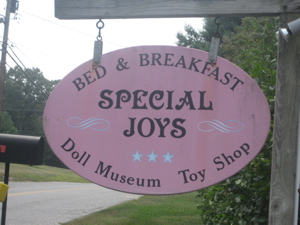 That was one of the final discussions SuperBlogger EdHill and I engaged in with our friend Liz while having lunch at, Shady Glen in Manchester, home of Esquire magazine’s best cheeseburger in the world. I was actually fearing “The pink building” for several months at that point because I had no idea what to expect. I had found it – “it” being officially the Special Joys Bed & Breakfast Toy and Doll Museum and Shop – online a year prior and had done a drive-by in between my visits to Coventry’s Brick School House Museum and Strong-Porter House Museum. 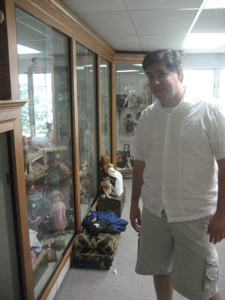 I noted the frilly pink and purple decorative eaves at the museum and thought to myself, “How am I ever going to go there and file a CTMQ report?” I knew I could never do it alone. I also knew EdHill wouldn’t have wanted to go there at all – which is why I didn’t tell him it was part of our outing that day. But the cat was out of the bag, thanks to Liz, and now Ed knew we were headed to “the pink building.” What neither of us knew – or could have known – was that we were about to experience our second CTMQ Twilight Zone moment together. (The first, you may remember, was the singular Witch’s Dungeon Classic Movie Museum in Bristol.) 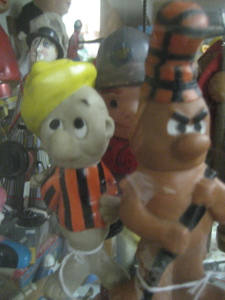 We pulled into the gravel lot and drew in deep breaths as we crossed the threshold of the Special Joys Doll Museum. Immediately, this place struck me as what hell would be decorated like; knick-knacks, doilies, Victorian lamps, pastels and pinks, floral wallpapers… on and on. Of course, millions of people find this endearing and cute. Just not me. 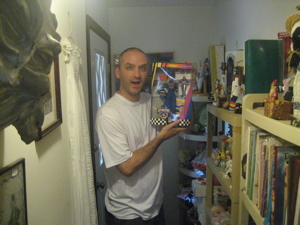 We roamed the foyer a bit and found a stash of vintage toys and record albums, circa 1960-1980. Ed is sort of a toy collector and was appreciative of this small collection. I found the very notion of a NASCAR Barbie a bit unsettling for some reason. Ed found the notion of purchasing an old Debbie Reynolds record enticing… Little did we know how much more there was inside to spend our money on… 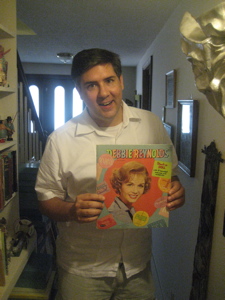 We left the hallway to enter the museum/shop. Wow. There were lots and lots of dolls. All sorts of dolls. Pretty dolls, ugly dolls, big dolls, small dolls. The proprietor was an older woman who didn’t seem to pay us any mind – as if guys in their mid-30’s made it a habit of shopping for antique dolls. Weird.

Weirder still was her little helper; a guy of about 40 who didn’t raise an eyebrow upon our entrance (the lady at least welcomed us before going about her business). Their business was that of finding a dress to put on some old doll. For the entire 30 minutes or so of our Special Joys experience, that guy was rummaging around boxes and bins for the perfect dress as though finding it would save the North Koreans from the next famine. Dude, it’s a dress. For a doll. In a pink building. Oi. 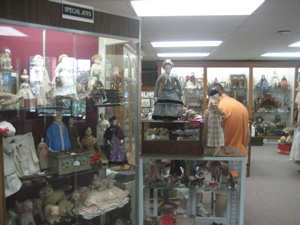 Ed and I made our way quickly around the one room museum to get the lay of the land. There was a definite ordering to it and the collection was definitely impressive. We squirreled away to the back corner and I began firing off pictures – I figured they weren’t allowed here because all this stuff was on eBay and I could “scam” unaware customers somehow. Essentially, the entire museum is for sale. Almost… there is one cabinet labeled, “Special Joys” which I guess means they are the Most Special Joys of all the Special Joys standing and sitting around the room.

Anyway, back to the corner where there was a very impressive display of Pogo comic character dolls. Ed pointed out Porky Pine and some others and rattled on about their political import and how their creator, Walt Kelly was a political nemesis. I was clueless and left the case to look for something cool, like Stretch Armstrong. Alas, I never found him. What I did find was a display of every Raggedy family member ever created. 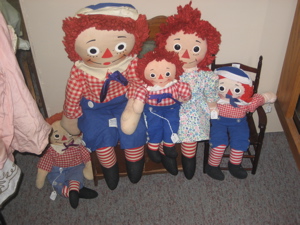 I used to have a Raggedy Andy – the only “doll” doll I think I ever owned. He was nice because you could tie his noodle arms and legs together to make sort of a ball to play rec-room knee football with my brother. From there, we moved on to another large display of dolls from, I’m guessing, the early 20th century. Why look, there seems to be a few offensive “mammy” type dolls in the mix. I guess that’s to be expected, so I didn’t really pay it much mind.

A large Barbie display included a Bob Mackie Barbie in original packaging. I have nothing to say about that, except I wrote it down for some reason so I guess I found it impressive at the time. There were some old Shirley Temple dolls as well, many of which were worth a lot of money. We spun around to see some more and… 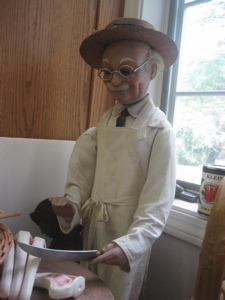 Ok. He’s pretty cool. This was my favorite doll in the shop. That’s only because they had no Star Wars stuff – the owner used to, but collectors snatched it up the day she decided to sell stuff. I’m not sure what a kid would do with a kindly butcher, a butcher’s knife, and some plastic pork chops, but I’m sure they could think of something. Let’s poke around some more. Looking over here… 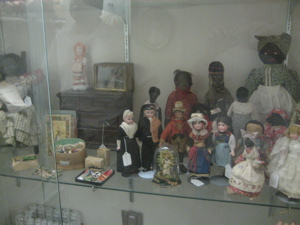 Oooookay, what are you gonna do? African-American history in the US is a tragic reminder that we have a cruel and dark past. The dolls from that era are grotesque, exagerrated caricatures of the black stereotype and a doll museum would certainly not be complete without them. Right? Right. 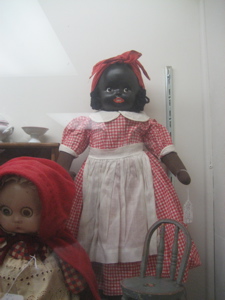 Zippity Doo Dah
Zippity Ay
My oh my
What a wonderful day. 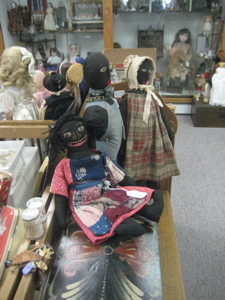 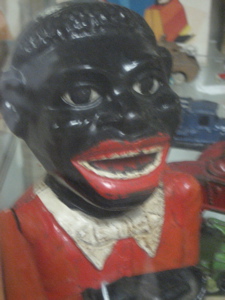 Mr. Bluebird on my shoulder,
It’s the truth;
It’s actual;
Everything is satisfactual. 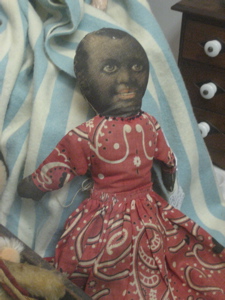 That last doll really, really freaked me out. Look at it. Stare at it (incidentally, doll people anthropomorphize all their dolls to a very weird extent. They are all “she” and “he” and they care about what they wear). It’s a photograph of a long-dead (probably) slave sort of silk-screened on the doll’s face. It just seemed so “Silence of the Lambs” to me. This had to be the end of this type of thing, right?

We chatted up the nice old lady for a spell, asking her what her favorite pieces were (I don’t remember) and asking about how the museum came into being. I did ask her if she has nightmares about the dolls killing her in her sleep and she didn’t really understand why I’d ask that. Um, gee, I don’t know… because they have FACES on them?

But that’s probably just me. Apparently, despite my awkward conversation, she felt comfortable enough with us to show us “the good stuff.” To be fair, the woman did not call it “the good stuff” and in fact, described the racist memorabilia as “grotesque.” She then rummaged for a second (right in front of the butcher guy doll above) and whipped out this cuddly piece of Americana: 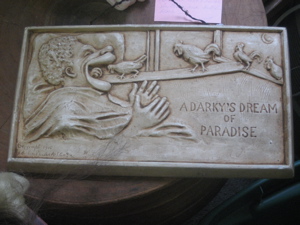 Yes, friends, that is a black man enjoying chickens walking into his open mouth with the caption, “A Darky’s Dream of Paradise.” Holy Crap. Now, I’m most disturbed that this is at a pink Bed and Breakfast slash doll museum slash doll shop. There is no “slash stone artwork” in that description. But there you have it. Again, the woman did not in any way condone these things or this part of American history at all.

Phew. Ed and I were reeling a bit when the heretofore silent guy obsessed with dressing his doll muttered something and the lady said, “Did you see the Brownies?” The guy’s face lit up and he replied, “No! Where?!”

They were right in front of me! Yesssss! The weird guy bent down, pressed his face against the glass, eyes widening and glassy; “Are those John Wrights?!” Wearing a proud grin the lady responded, “Yes!”

I waited a second and then sarcastically oozed, “THE John Wright?” In fact, they were real John Wrights! Not that I nor Ed had any idea who John Wright was, mind you, but that didn’t seem to matter to the two Specially Joyous ones. Ed and I didn’t really want to leave for some reason. It seemed like we’d only scratched the surface somehow, despite staring at the same dolls for a good long while. Just before leaving I noticed a tucked away box of old postcards and pictures – all of which were for sale. 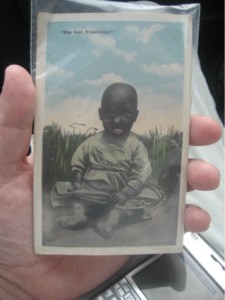 Since you can’t read it, that postcard says across the top, “Who said watermelon?” Really. At this point, Ed and I were confused and a little freaked out. This quaint li’l cutesy doll museum had suddenly turned into a KKK meetinghouse. There were stacks of blatantly racist postcards for sale. I bought the one above for a buck or two – it was just too insane to pass up. The truly freaky part about it is that the sender’s note on the back was as matter-of-fact as you please… “Hey guys, it’s sunny and warm down here! Hope you don’t get too much snow! Betsy even got a sunburn, la-la-la.” They left out, “Don’t mind that this postcard is pathetically disgusting, yay white people!”

It was from an Albert Hicks to Gracie Hicks Smith who lived on Route 2 in Cedar Springs, Michigan back when postcards cost one cent to mail. So from CTMQ to the Hicks family of Michigan: Screw you.

Just in case the level of surreal wackiness hasn’t impressed you thus far, just before we left I noticed a big framed picture on the wall leading to the B&B portion of the old house. Here it is: 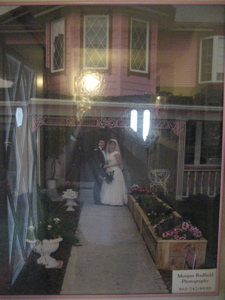 I don’t even want to know what that guy did to deserve that fate. I can’t even make a joke about it here because the mere thought of getting married at The Special Joys Toy Shop and Doll Museum just freaks me out for about eight different reasons.

The proprietor was very nice, did not condone any of the crap she was selling, and the collection was very nice and well presented. 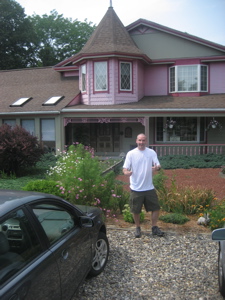 Rereading this old page and I’m once again crushed by sadness that EdHill passed away in 2016. Also, when updating the links to Special Joys, I’ve noticed that they are no longer billing themselves as a museum. So this page, though still funny to me when I remember our visit, is doubly sad. 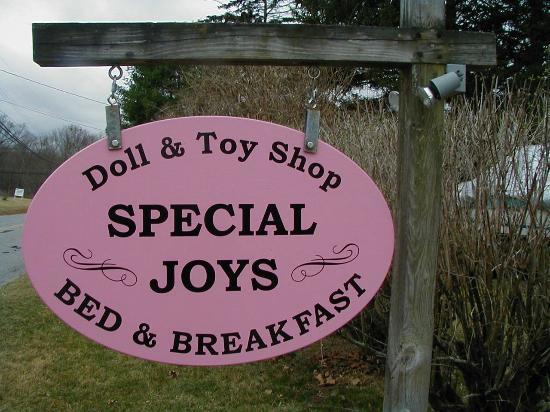