CTMQ > Everything Else > Religion & Remembrances > The Ancient Burying Ground of Hartford

How Many Dead Hookers Fit in this Graveyard?
Hartford Ancient Burying Ground
June 9, 2009 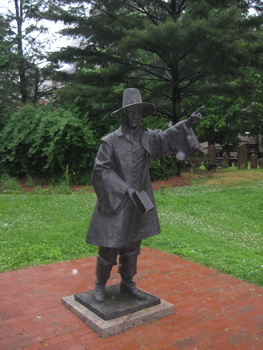 Way back when I started this blog, I mentioned that I wasn’t interested in cemeteries. And this remains largely true, but I’ve found several around the state that warrant mention. My mind was changed down in the south end of Hartford at the Cedar Hill Cemetery (CTMQ Visit here) which, oddly enough, I’d recommend to out-of-towners looking for something cool to do in our capital city. 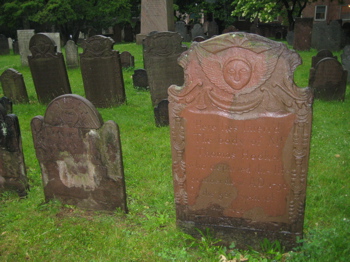 They offer tours of the grounds and I know there is a ton of history present here. However, I’ve not done a tour and can only offer my own insights, such as they are. I’m somewhat hampered in this effort because the ABG website does not seem to be complete. Oh well… How much about dead Hookers can you take anyway?

Okay, okay… I’ll stop with the Hooker stuff. As most readers surely know, the founder of Hartford was a firebrand Puritan named Thomas Hooker. He left the Massachusetts Colony in about 1635 over some differences with the other church leaders there. Hooker felt that all men should be able to vote, and not just church members. (This made him the crazy liberal of the day.) He and about 100 others settled on the Connecticut River in what is now Hartford.

Flash forward 360 years to the wondrously bad Norm MacDonald film “Dirty Work” and the wondrously tasteless “Dead hookers in the trunk” bit. I just can’t get that out of my head… and if you have a taste for the tasteless, go ahead and enjoy the scene here. 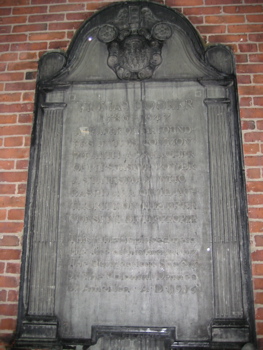 Now that I’ve gotten that out of the way, let’s talk some 17th century Hartford history already. From 1640, four years after the arrival of the first English settlers, down until the early 1800s, it was Hartford’s only graveyard. During that period anyone who died in town, regardless of age, gender, race, ethnic background, economic status, or religious faith, was interred here. The oldest gravestone is believed to be that for Timothy Stanley, who died in 1648.

Approximately 6,000 men, women, and children are believed to have been interred in the Ancient Burying Ground, which was originallyconsiderably larger than it is today. Over the centuries commercial buildings, as well as the First Congregational meeting house, were erected on Burying Ground land, whittling it down it to its present size of four acres.

The vast majority of people interred in the Ancient Burying Ground – perhaps as many as 90 per cent – never had one to mark their final resting place. In 1835 there were 563 stones in the Ancient Burying Ground; by 1877, 526 stones were left. Today, approximately 415 stones still stand. Over the years, several efforts have been made to restore the grounds and preserve them for antiquity. 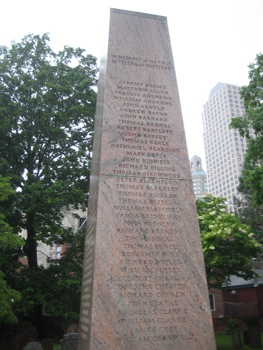 A huge obelisk was erected in 1837 commemorating Hartford’s founders but 150 years later, it had deteriorated drastically. The Society of the Descendants of the Founders of Hartford replaced it in 1986 with a new obelisk of solid pink granite from Stony Creek, Connecticut, to commemorate Hartford’s 350th anniversary.

So yeah… I just looked up The Society of the Descendants of the Founders of Hartford and found a ton of great information. Check it out. Definitely some more stuff around town for me to find.

The ABG is behind Center Church. The Reverend Thomas Hooker, the congregation’s first minister, and his followers subsequently settled in Hartford in 1636. The congregation’s first and second meeting houses were located near where the Old State House stands today. In 1737 the Society was granted permission to erect a new meeting house on a corner of the Ancient Burying Ground. In 1807 that structure was razed and the current church constructed. Art patron and civic leader Daniel Wadsworth designed Center Church which, like Hartford’s Old 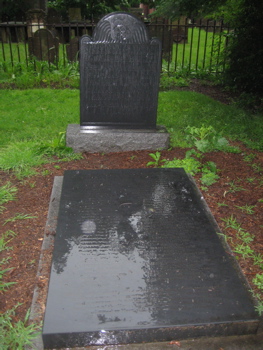 State House, was built by architect/builder John Leffingwell. The church’s soaring ornate white Baroque-style three-stage spire made it one of the tallest and most opulent structures in Connecticut at the time of its construction. The church interior features five stained-glass windows by Louis Comfort Tiffany.

So many important Connecticut names here… Leffingwell, Hooker, Wadsworth, Tiffany. It’s too much to handle.

In the end, no one is sure whether or not Thomas Hooker is even buried here. There are about 4 monuments and plaques dedicated to the guy here and more elsewhere around town (like his statue here, at our visit to the Old State House).

I would definitely recommend a real tour of the Ancient Burying Grounds in Hartford. I’ll certainly join one someday and maybe even write a more comprehensible page about it. 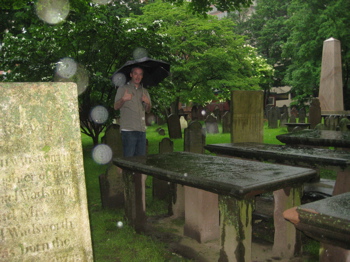