This Tree Is Was A-Oak-Kay!
The Dewey-Granby Oak, Granby
Multiple visits

2010 Update: In May, a box truck hit the tree. Here’s the tree health assessment.

2011 Update: A historic Halloween ice and snowstorm hit northern Connecticut. With the foliage still on the trees and the snow being heavy and wet, The Granby Oak suffered severe damage. See picture below. 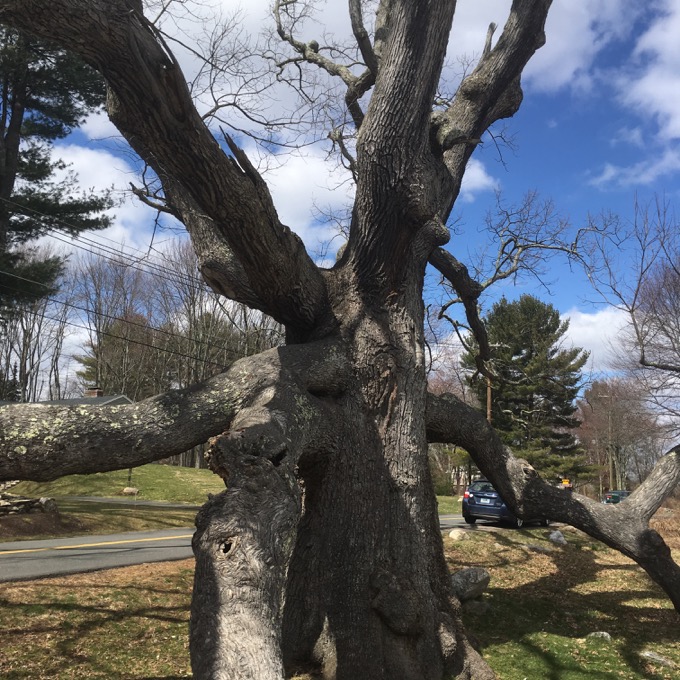 But let’s back up for a minute…

On a beautiful September day my family made the pilgrammage north to the area of the state affectionately known as, “Am I still in Connecticut?” Like a Wiccan or a Druid, I had picked the Autumnal Equinox as the exact day to experience the Dewey-Granby Oak. I had stumbled across a website touting this particular white oak (Quercus alba) and CTMQ has an affinity for cool trees – so we made a date. 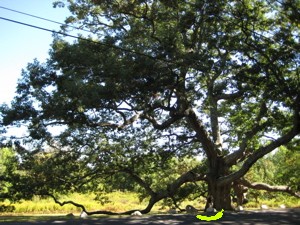 For a sense of scale, Hoang and Damian are standing above the giant banana. Damian loves bananas.

At one point in CTMQ’s maturation (still very much ongoing), I had a list of stuff to see and merely had written, “The Coolest Tree.” One day I received a very thorough and appreciated email from a “Doug42351” (thereby becoming “Friend of CTMQ Doug42351”) who instantly knew I must have been thinking of the Granby oak, and sent me some good info on the tree. In a state with a few million trees, Doug42351 and I both agreed that the Granby Oak was our “Coolest Tree.” This, only one town north of Connecticut’s largest tree, The Pinchot Sycamore. (CTMQ visit) That’s how cool this tree is. 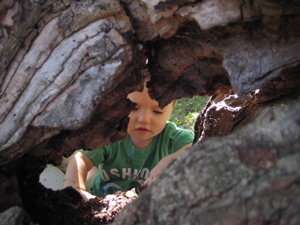 Still not convinced? The Internets yielded the following, from a site for people who do brevets – long distance bike rides with pre-determined points of interest.

Bernie and I were scratching our heads at this point wondering how we had missed the cue and that’s when the little light went on in my head. It turn out that the cue was a landmark not a turn and it was the tree at the top of the hill that had caused me to shout “HOLY S— THAT’S THE COOLEST TREE I’VE EVER SEEN IN MY LIFE!!!!” The old oak would have made a fine home for Pooh Bear. The trunk must have been 10 or more feet in diameter. And lying on, not sitting or straddling, one of the branches was a 15-16 year old kid. It was fantastic.

That pretty much seals the deal, but if not, the Granby Land Trust has the tree’s image in its logo:

Once we were driving on Day Street, Hoang and I asked each other how we’d know where the tree is? We poked along looking intently into the woods and trying to pick up visual clues or signs. Once we crested a hill, we immediately became aware of how silly our concerns were – there, right alongside the road, stood the majestic 450-to-500 year old tree. Wow.

“That’s the coolest tree I’ve ever seen on the East Coast!” blurted Hoang. (We’ve seen Sequoias in CA, banyans in Hawaii, and the Octopus Tree in Oregon, so we have to qualify these things.) While Hoang and Damian cavorted among the twisting low branches, I struggled to find a suitable angle from which to take a good picture. (As you can see, I never found one.) 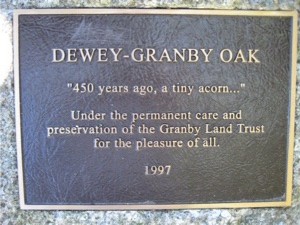 Joining my wife and son, we marveled at how one low branch actually goes underground, resurfaces, and continues outward for another 100 feet or so! I didn’t know oak trees could do that. The Granby Land Trust, who owns the land, keeps the area clean and tidy, which is certainly nice. The three of us sat on the branches, walked around the tree several times, and just sort of enjoyed the tree. It’s almost like the tree purposely grew in fairly remote Granby in order to live long enough to impress us fans.

The following paragraphs are culled from a piece written by Carol Laun entitled, “EVERYTHING YOU EVER WANTED TO KNOW ABOUT THE OAK.” 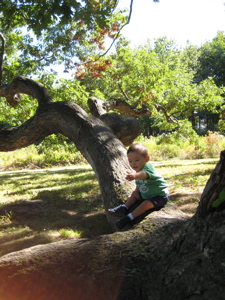 Much has been written about the ancient oak tree on Day Street in Granby, Connecticut. It was growing around 1600, long before there was a Granby or a Day Street. The land it is on has been in the possession of the Dewey family since 1734, when Isaac Dewey ventured into the frontier wilderness of the Salmon Brook district of Simsbury.

(Not much has changed since then.)

Eight generations of Deweys farmed the land, and added another 100 acres. When the old homestead was sold in 1976, the family kept a little over an acre of land, which included the Granby Oak. The Oak has had a special place in Granby’s heart for a long time.

In 1975, the Town of Granby started using the Oak as a symbol in the Town Seal. A year later, when the farm sold, The Dewey family considered selling the tree, and the Granby Conservation Commission and the Granby Land Trust started a fund drive. However the family decided not to sell. The Oak was too important to them. 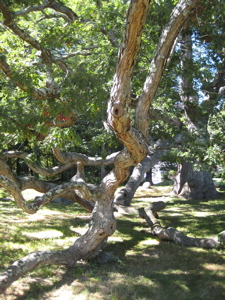 A deluge of advice has been offered about the Oak, and few of the experts seem to agree. Should the road be moved or will road work damage the roots? Should the surrounding area be cleared or left natural? should the poison ivy be removed? Should the tree receive deep or surface fertilizer or none? Should the limbs be cabled or not? (They cannot be lifted, only supported.) Should trucks of a certain height be banned from Day Street?

All things living are mortal, and as we attempt to achieve a kind of immortaltiy with our children – so it is with the Oak. About 1981, an acorn from the Granby Oak was planted. The tiny seedling was moved to the grounds of the Salmon Brook Historical Society in 1986 to celebrate Granby’s Bicentennial. It is thriving, and is spreading out small branches just like the mother tree. 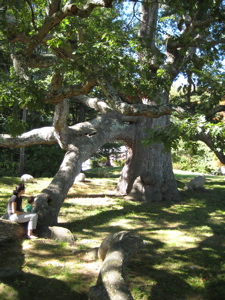 The book of Notable Connecticut Trees calls the Granby Oak the “most picturesque” in the state. The huge branches of the Oak lean on the ground, spreading out nearly 130 feet. For centuries, this tree has stood – enduring, deep rooted, wide spreading, and a symbol of the roots that have been established here in the town of Granby.

The three of us visited again in 2009, because really, who can go more than a few years without checking in on the majestic oak? I had a slightly better camera and offer slightly better and larger pictures. 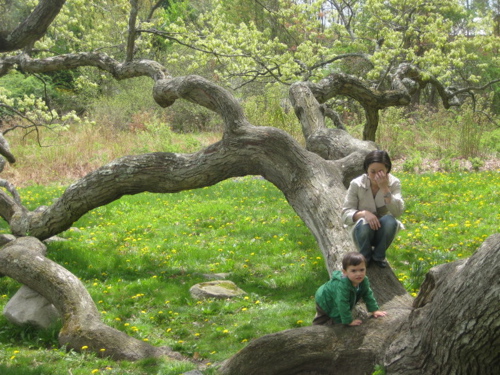 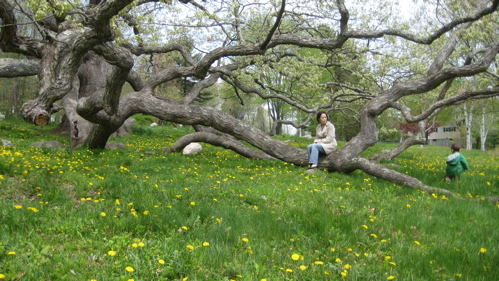 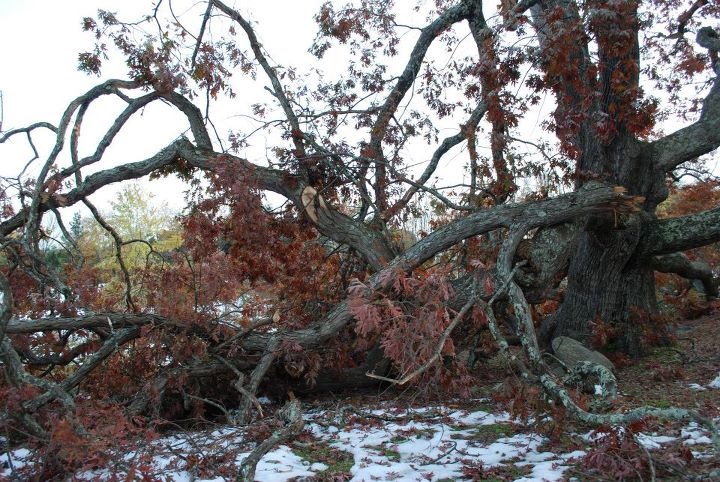 Well, now I know: Not much… yet. My dad was visiting and oh, I have another son now. We visited the oak the day before Calvin turned 7 and as I suspected, it was worth the minor detour to allow him to experience the tree. 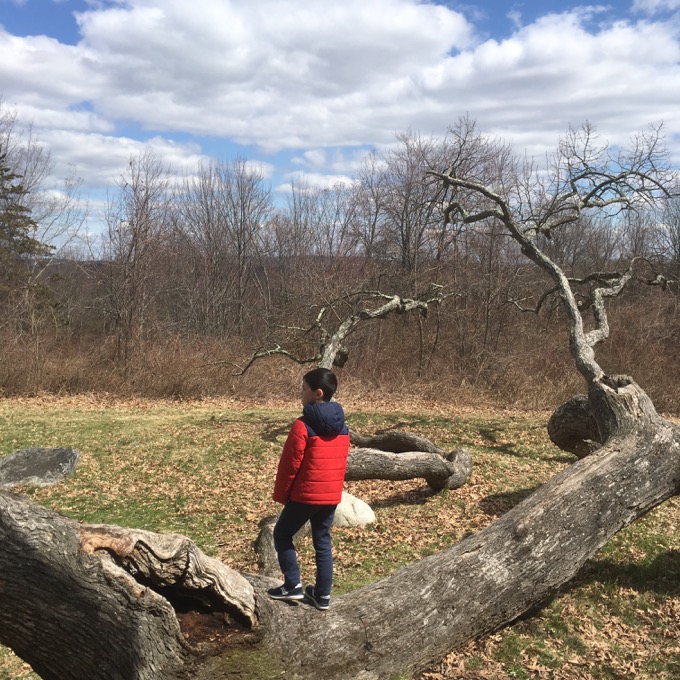 It has certainly suffered mightily since I first visited. Major limbs have disappeared and others are not long for this world.

Everything dies eventually, and when this tree finally suffers its final fate, we can’t be too sad. Other than the box truck vs. limb incident, I’d guess everything else happening to the tree is natural. Well, other than the decades of Day Road traffic buzzing by I suppose. 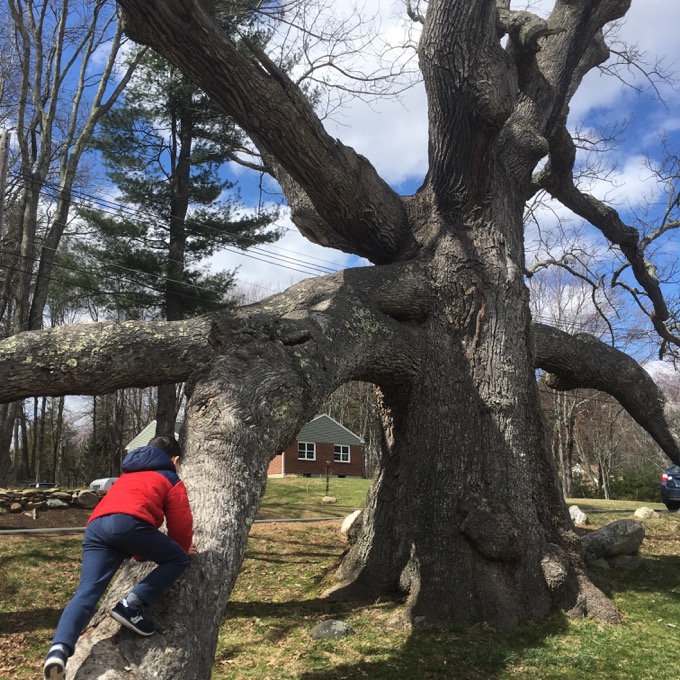 One major limb is supported by a wire now, and no branches drape over the road. It is still impossible to take pictures that do the tree justice. 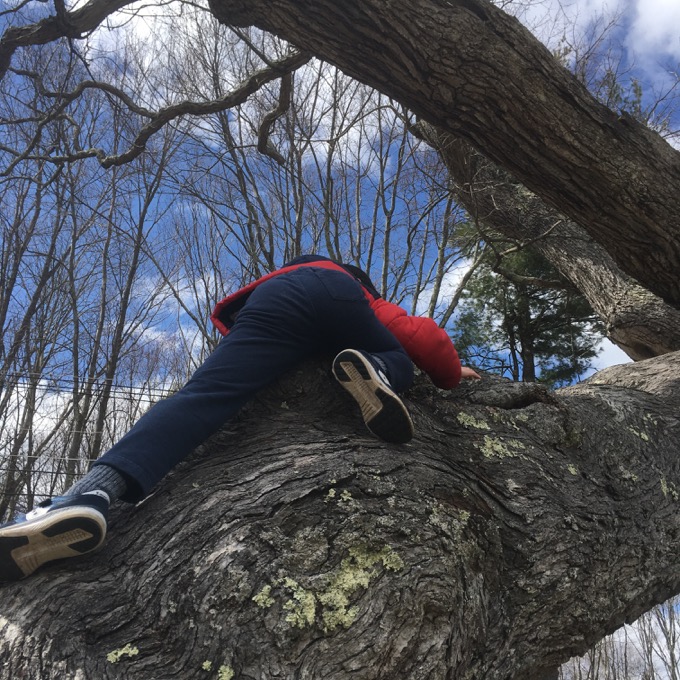 My dad wondered aloud, “they should take some acorns and plant them to continue this line of tree.” I said, “Yeah, they probably did that,” but I was just making conversation. So I’m happy to have read what I wrote on this page 11 years ago that, in fact, that is exactly what has happened! 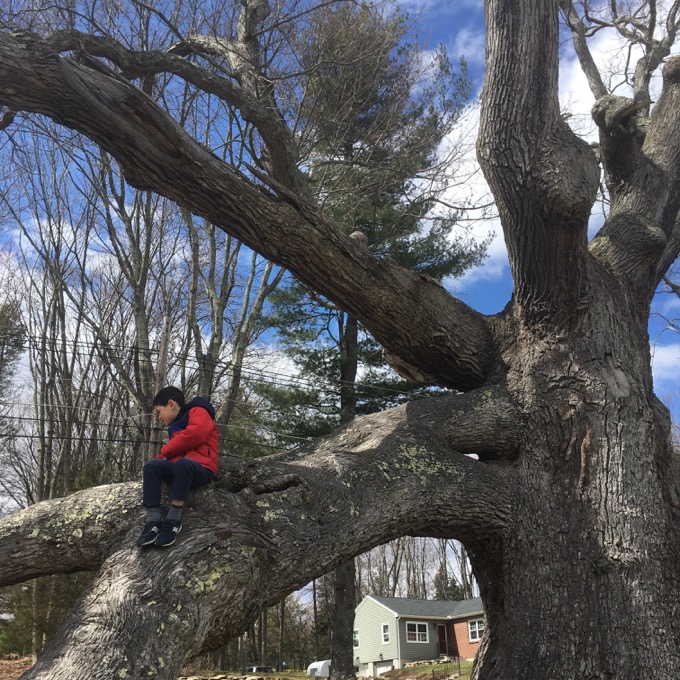 After Calvin got stuck up a little too high for a second time, we decided we’d leave the tree in peace and hit the road.

J.W. Ocker’s visit for OTIS with some great pictures