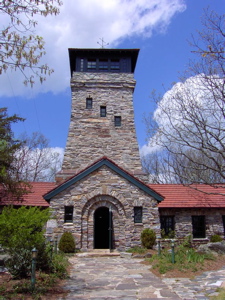 Our 3 day highpointing tour of the south continued with a relatively short drive west from Rome, GA to the Talladega National Forest in Eastern Alabama. Before we got going, we opted for a nasty IHOP breakfast in Rome (Later, while watching the Tour de Georgia recap on TV, my new friend – Hoang touched him the day before – Lance Armstrong said, “It’s great to be able to eat at an IHOP the morning of a race for once.” He had to have been lying. After breakfast, we stopped at a walk up ATM and withdrew some money. I often write unnecessary details in these highpointing reports, sure, but why mention this? Because while I was waiting for my cash, some fine southern gentleman didn’t notice my behemoth Chrysler Concorde and decided to ram the rear bumper. “Great,” I thought, “a real hootenanny.” I figured I was technically illegally parked and didn’t wish to pursue the matter as the car only suffered a scratch or two. Fortunately, Mr. Magoo felt the same way, we shook hands, and I sped off… No harm done — yet. 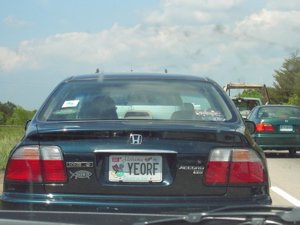 Nothing eventful happened on the drive south to I-20 West. We were making great time on the Interstate until we hit standstill traffic due to an accident. Another boring and useless side note? Yeah, but we did sit in traffic behind the car in this picture. Two things stand out: The Darwin fish and the “Support the Arts” license plate – In Alabama! Maybe this state wasn’t as bad as we’d imagined. The driver must have some cojones… I’d imagine she gets hassled all the time for her car. Much like the gay black waiter in Hiawassee, GA the night before, I wanted to give her the secret “New England Liberal Elite” wink and hand signal.

The poor joker responsible for the traffic jam apparently lost his entire house along the highway. A doublewide trailer hitched to his pick up truck had jack-knifed and spilled all over the highway, the shoulder, and the median. It looked like Fred Sanford’s house blew up on an Alabama highway. Once past the accident, it was smooth sailing to our exit for Cheaha Mountain. 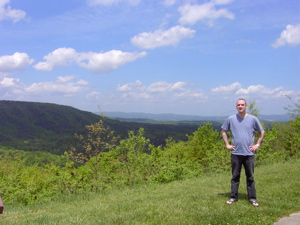 The drive through the National Forest was very nice. The winding ribbon-like road rolled up and down verdant hills, which afforded many decent views — definitely a pleasant surprise. Certainly far more enjoyable than South Carolina’s highpoint environs two days prior, that’s for sure. Heck, we even got out of the car for a few minutes to soak in some sun.

After about 10 miles of this pleasant drive, we arrived at the highpoint parking area and visitors center. And motel. And hotel. And campground. And restaurant. And store. And pool. I found it funny that, in 3 days and not too many miles, the differences among the GA, SC, and AL highpoints couldn’t be more. Mt. Sassafras is a forgotten dump with no views. Brasstown Bald is a beautiful, well-kept, real mountain with great views and a visitor center on top. Cheaha Mountain is a tacky tourist destination with moderate views. 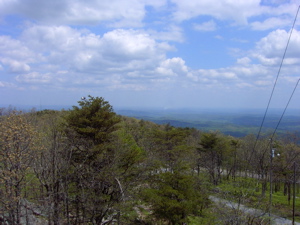 We drove straight through the corny tourist area and up to the top. Looking back, I wish we had parked and walked up that last half-mile or so, but at the time, it didn’t cross my mind. Once on top, there were suddenly absolutely no people at all, save for a weed whacking park worker. There were a few hundred people a couple hundred feet below, milling about, discussing the next day’s NASCAR race at Talladega Speedway. I can’t imagine for the life of me why the actual highpoint wasn’t crawling with people… I just don’t understand some people.

There is a rather nice stone tower marking the highpoint of Alabama. Unfortunately, a mess of TV towers, cell phone towers, and other junk surrounds it. Like South Carolina, the benchmark is at least 10 feet below and 50 feet away from the true highest point. Why? Who knows… Apparently that’s the way it is down south. The tower was open and we climbed several flights of stairs to the top. Open windows afforded 360-degree views… But only one direction was clutter free. 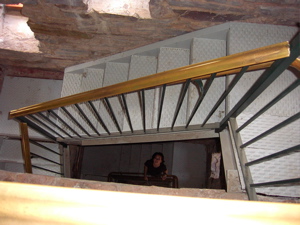 Pathetically, my quadriceps burned with pain and I struggled down the steps, as a result of our backwards climb the prior day in Georgia. Man, I am out of shape. Hoang, of course, bounded down and mocked me the entire way. I implored her to please stop making fun of me… I was in pain! Back on terra firma, we walked to the back of the tower to a boulder, which was, I’m quite certain, the true highpoint.

In flip-flops and a skirt, Hoang completed her 12th “climb,” we snapped the required picture, and drove back down to the gift shop area. The road down wound though campsites where everyone was “camped” with their trailers and barbeque grills. There were cabins and lodges and all types of places to spend your weekend on Cheaha Mountain… As long as you didn’t mind being surrounded by a hundred other people all the time. Thirst and hunger overcame Hoang’s fear of the South, and for the first time in either SC or AL, she exited the car and entered a place where we were bound to interact with human beings. 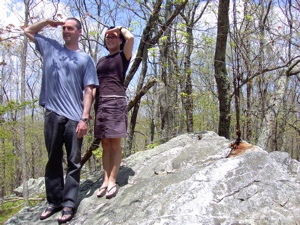 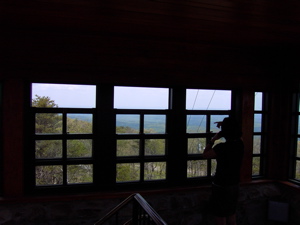 “Yes, um, we might go check it out.” I stammered. I wasn’t thinking and initially thought he was referring to the bike race in Rome the night before, rather than (of course) the NASCAR hoedown up the road at Talladega. Something tells me if I didn’t catch myself, we would have been laughed out of the store. In the end, Hoang survived just fine, and the extremely salty chips left her with fond memories of Alabama.

We drove the straight shot east to Atlanta and decided, having time to spare, we’d check out Stone Mountain in Georgia. While backing the behemoth car into a parking spot, I misjudged the battleship-sized trunk and bumped right into a cement post. Two back bumper mishaps in one day! This one put a decent little dent into the bumper, but luckily, the fine folks at the rental car place didn’t bother to notice. 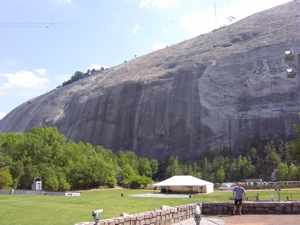 Stone Mountain is an incredibly lame tourist trap. Sure, the giant carved granite thing on the mountain is pretty cool looking, but the attendant tchotchke and knick-knack shops were too much to bear. The crowd afforded plenty of great people watching, but that was about it. Also, my quads were killing me and Hoang continued to make fun of me. Yeah, really funny… I had warned her earlier at Cheaha Mountain… So I stopped her once and for all. “How you like me now?!” 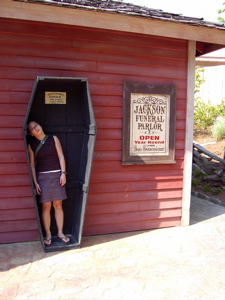