At one point I think I had a plan to visit all the state parks in Connecticut and blog about them too. Who knows, maybe I will someday but it’s not on the docket right now. Through my hikes and general curiosity I’ll be hitting a ton of them regardless. And every once in a while, I’ll stumble upon a little secret nature center to add to my museum list. 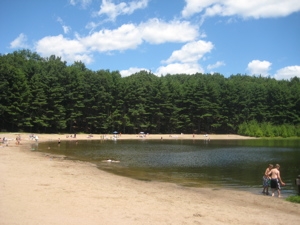 Simsbury’s Stratton Brook State Park is not more than 15 minutes from CTMQ’s homebase. This is extra exciting for us because they have a decent little beach and swimmable pond! I showed the beach and pond to Hoang a few weeks prior and noticed the little “Nature Center” sign at the time. Excitement ensued. 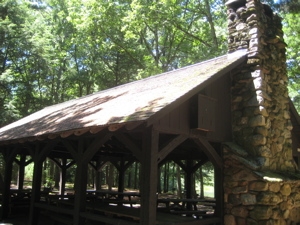 After a few days at Rehoboth Beach in Delaware, this little beach is a bit rough. But Damian couldn’t have cared less; nor did he care that his genius parents forgot towels. He ran right into the slightly murky water and had a grand old time. There are a few miles of nice trails here too, but the beach and the lake are the true draws.

Not to mention the nice cookout grove amongst the white pines and a large, stone pavilion I’m sure can be reserved for parties. I’m so happy to have found this park and expect to be back several times. Oh, and get this: In 1996, this park became Connecticut’s first state park that is completely accessible by wheelchair. But what about the nature center museum, you ask? 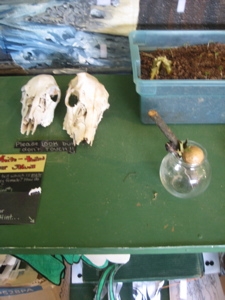 I tried to coax Damian up to the center a few times with promises of turtles and snakes, but he wasn’t biting. Swimming was a bit more enticing to him. So after a couple hours and it being way past naptime, we packed up and headed out.

Not so fast! I had poked around earlier and noted that this was a tiny little place. I figured Damian could check it all out in five minutes so I convinced Hoang to join us. As it turned out, we were there maybe four minutes. 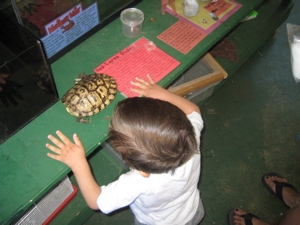 Again, it’s small. Very small. But that’s not to say it’s not valuable or fun. Everyone loves turtle shells and green frogs in tanks! Wait – green frogs in tanks? I’d just seen three green frogs along the shore of the non-swimmable portion of the lake, which is a bit more exciting to me. Though they did have a black water snake, which was cool. 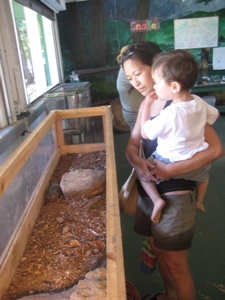 Water scorpions are not really scorpions, but insects with only 3 pairs of legs and 2 pairs of wings. Their name comes from their specialized grasping forelimbs, superficially similar to the anterior ‘pincers’ of scorpions, and an elongate caudal siphon or breathing tube, which conjures up the image of the scorpion’s long stinging tail. In both cases, these features are completely different from their scorpion counterparts. The forelegs of a true scorpion have a powerful pincer – similar to that of a crab or lobster – at the tip. The forelegs of the water scorpions are likewise adapted for grasping prey, but lack pincers; instead, they use a jack-knifing design with the outer segments folding into a groove to secure prey. The tail of a scorpion has 6 rounded segments with a terminal venomous spine, and can be folded forward over the animal’s back. The tail siphon of the water scorpions is actually two straight filaments pressed against one another; the siphon is not jointed, can pivot only at the base, and does not sting. It is used to obtain air from the water surface, much like a snorkel. 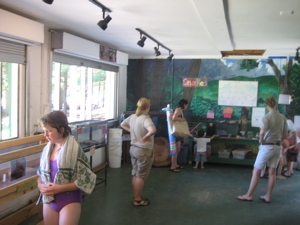 Man, is there any other animal with a cooler name that turned out to be such a wimp? Though I’ll give it up for the tail breathing thing; that’s pretty darn cool.

There are some displays here about deer and wetlands and composting and the usual stuff like that. I’m sure I’ll spend more time inside during another visit, but I really do think we pretty much saw it all.

They do have a full slate of summer activities here; nature hikes and all sorts of classes for kids and adults alike. Come for the beach, Stay for the water scorpions. 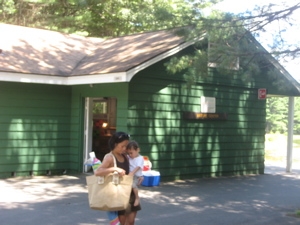