On February 22, 1980, the single greatest sporting event in US history took place in Lake Placid, New York. The “Miracle on Ice,” as it is known, still affects me to this very day. I can watch the highlights and documentaries over and over… USA 4, CCCP 3. I even enjoyed the Disney-fied version in theaters last year. Now, all these years later, Hoang and I visited the quaint burg for our assault on Mount Marcy, just south of town. 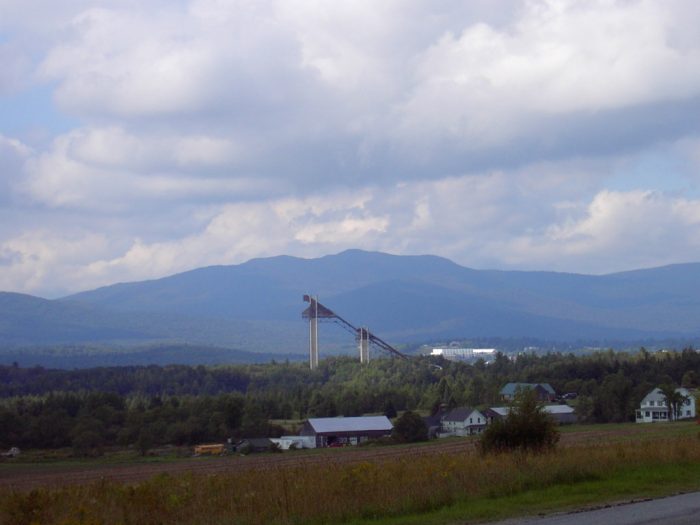 As per usual, in my continuing effort to make these trips as enjoyable as possible for my wife, we stayed at the Golden Arrow Resort along the shores of Mirror Lake before and after our hike. The other option was to camp out, which would have reduced our highpointing hike by 4.2 miles, but I think the king size bed, warm shower, dinners at nice restaurants, and lack of bears eating our food was well worth the extra one-day mileage.

And so it was, on a cloudy Saturday on Labor Day weekend, I had another “moment” which may affect me for years to come. And it took place very near the famous ice rink in Lake Placid. I had to come to grips with being out of shape, pretty much for the first time in my life. Yes, both Hoang and I were actually passed by a few people on our 7.2 mile hike to the summit. And believe me, it wasn’t a result of Hoang holding me back either. I rather enjoyed – err, needed – the frequent rests along the way. 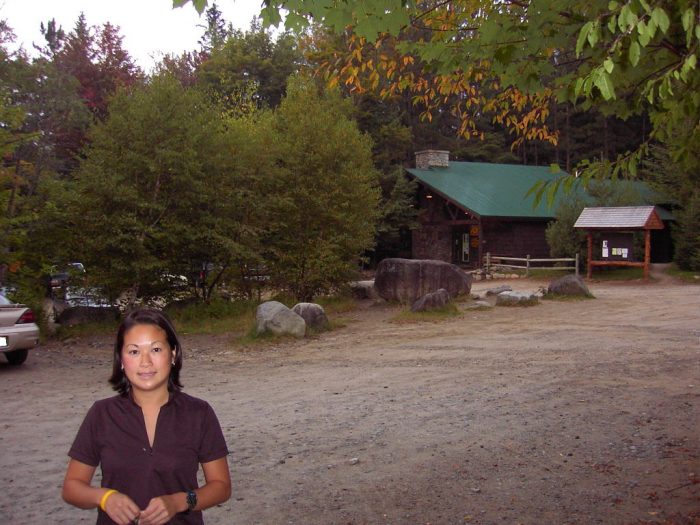 I’ve heard that a good marriage will result in sloth. I can confirm that this is true. We (ok, maybe just me) have had no desire to hit the gym after work during the last year or so. As a result, we’ve put on a few pounds and have lost some cardio capacity. If anything, this hike served as a wakeup call to us both. I’m not the least bit worried about either of our abilities to bounce back. All that being said, keep in mind that this was an almost 15 mile hike (the longest in Hoang’s life) and that by all accounts, we still blew the estimated total hike times out of the water! For example, here is a blurb from the official highpointing website:

Marcy can be hiked in a day from the base camp at Adirondack Loj. It is not a difficult climb — just long. I started at 4 a.m. at the end of September… I managed to make the roundtrip returning at 3 p.m. This was a good time.

Read on, dear reader, to see how we fared. 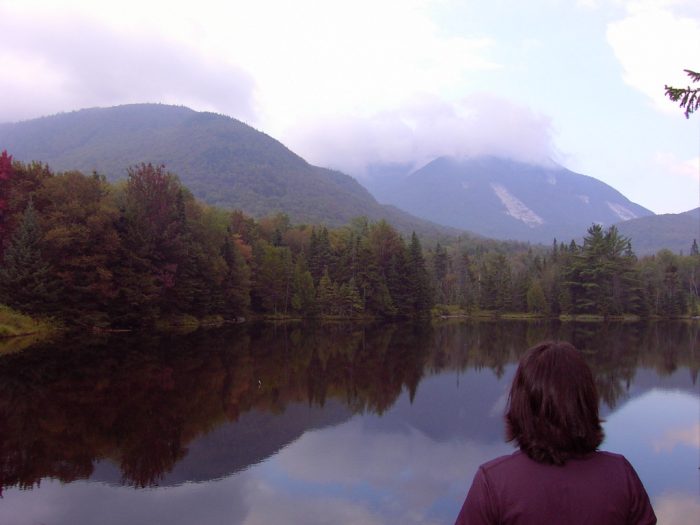 Marcy is a very unheralded mountain, even among the “46’ers;” the high peaks of the Adirondacks. It is not featured on many postcards, and it is rarely mentioned in local guidebooks or hiking suggestions. Perhaps this is a good thing, for it is already over-traveled as it is. The large parking lot fills up on weekends, the local bears are far too people-savvy, the trail itself is deeply eroded and rutted, and, quite frankly, there are just too darn many people out and about. This is not to say that the climb is not an enjoyable one, or that it is impossible to gain solitude. 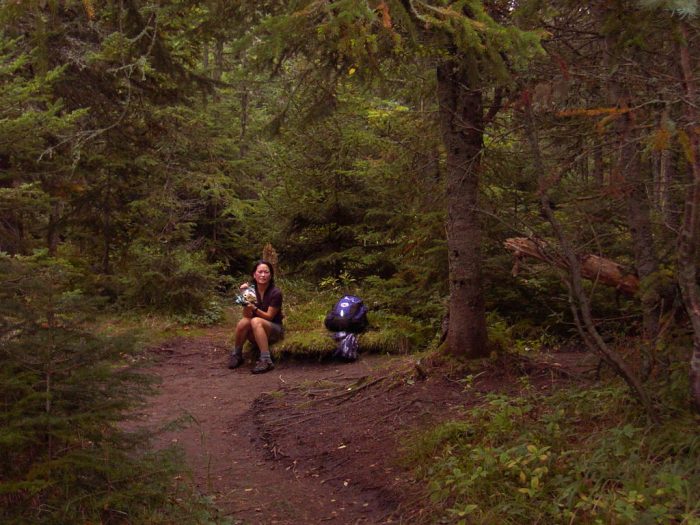 Enough griping… After a relatively early night out on the town, we were in bed by 11 PM or so. The local breweries, not to mention the plentiful local wineries, could put a serious crimp into one’s plans for early morning physical activity. We, however, were a bit more thoughtful than usual and kept our carousing to a minimum. The alarm woke us at 6:30 AM and both of us bounded from our slumber without too much resistance from minds or bodies. For once. 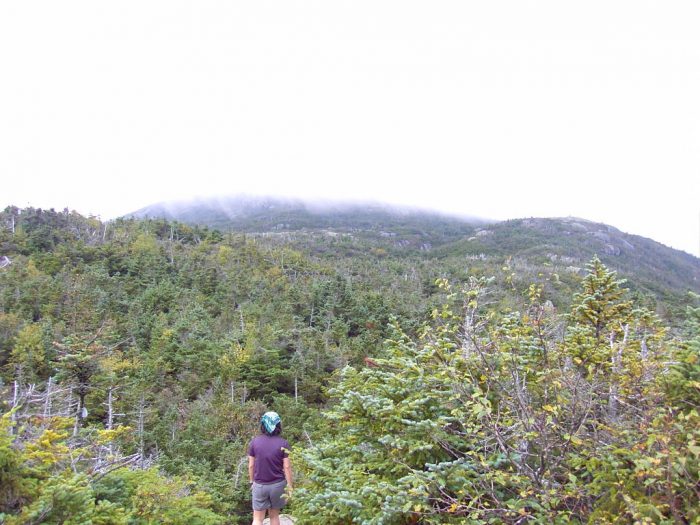 The local weather report changed from perfect 12 hours ago to “mostly cloudy.” Oh well, maybe we’ll get lucky on top, I thought. A short 15 minute drive back out of town past the giant ski jumps (I can’t believe human beings actually fling themselves off of those things) to the trailhead at the Adirondack Loj, a few words of encouragement, a short wait in a line to sign the register, and off we trudged. Of course, it was at this point that we realized four very annoying details: We forgot our Leki hiking poles, we forgot Advil, we forgot Tums, and we forgot my knee brace… All back in Connecticut! Oh well, it’s only 15 miles, right? 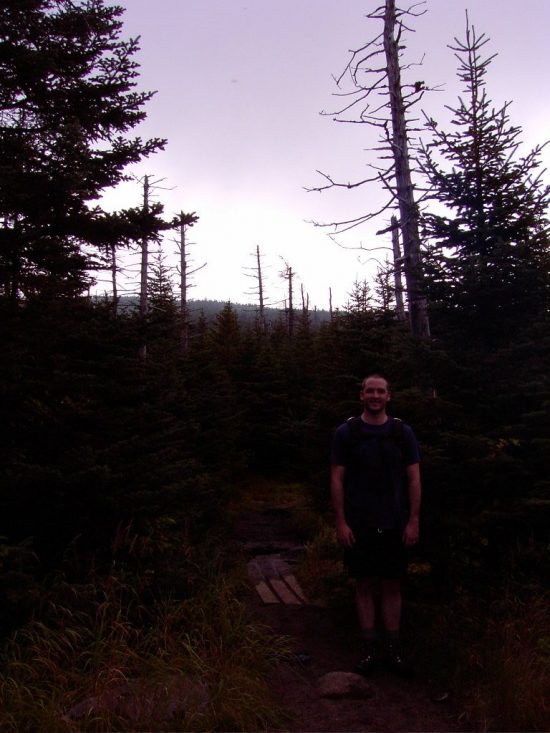 I always work out a psychological plan, at least, when faced with a long and hard hike with Hoang. Oddly, despite the length of this hike, and despite our relative weak fitness levels, neither of us ever spoke or openly worried about the effort Marcy would require. I had read that, while long, Marcy is never too demanding, so I knew it would be easier than Katahdin and since we’d be sleeping in a comfy hotel room that night, I didn’t think too much of it.

From the outset, I planned to play up the “overpriced dinner/hotel room that very night” concept. I also knew the first 2 miles were flat and very easy; all the way to Marcy Dam. I regarded these first two (and hence the last two) miles as throwaway miles… Nothing to worry about, easy and inconsequential. Turns out, I was right. We arrived at the beautiful Marcy Dam in no time. “Now is when the hike actually begins,” I told both Hoang and myself. And believe it or not, I think this psychological tactic actually worked! I read in someone else’s Marcy report that the view of the mountains and lake at the dam was akin to something from Europe. Well, I hate to ruin that idyllic comparison, but no way is that remotely true. It is very pretty, yes, as the picture here can attest, but having just spent some time in the Alps and Pyrenees, comparing to two just isn’t fair. 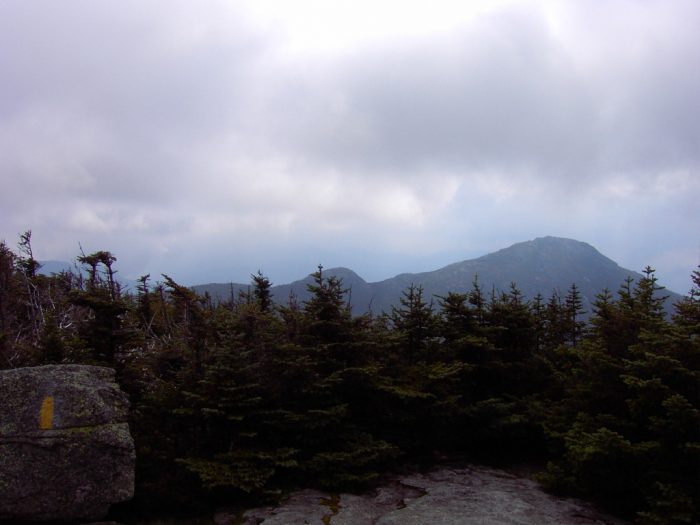 Poor Hoang, in what I think was feigned disappointment, kept muttering, “Where are the BEARS?! I want to see some BEARS!” Alas, no bears were seen on this day. Heck, we didn’t even see any bear scat. Once past the dam, and much to our surprise and elation, the trail remained rather easy. Sure, it was uphill, but certainly less difficult than some other mountains we’ve done. It was also muddy, which I’ve come to realize is a perpetual situation on Marcy. The first couple miles or so past the dam are pleasant enough, mostly along a river and never too taxing. 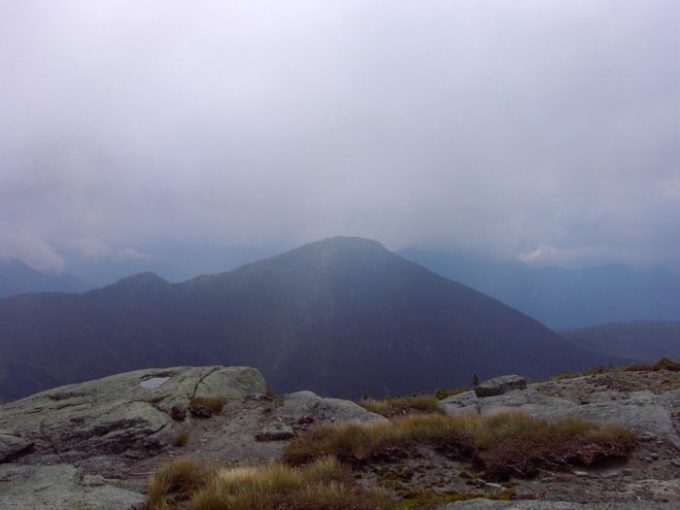 About halfway to the summit, we came to a short turn off for some falls. Hoang rested and ate some snacks while I checked out the waterfall. It was pretty cool, but that was only because there were two guys in their 20’s scaling the rock face with no equipment. Their dad watched passively, so I was confident they knew what they were doing. We passed and got passed by this group of three about ten times. Turns out, the father, at least, is also a member of the Highpointers Club who had just completed Granite Peak in Montana — one of the hardest 2 or 3 US highpoints. After this respite, the trail did become pretty steep in places, but never really requiring the use of hands to scramble, and certainly never for too long. Unfortunately, it was around this time Hoang’s heartburn really kicked in… along with a slight headache. 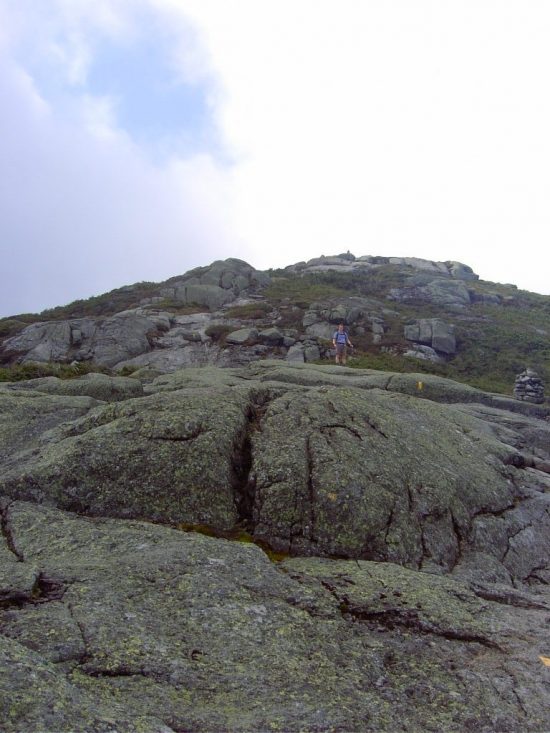 She had reached the “Silent/Just-Finish-Already” mode, for sure. At one point, upon passing a couple, Hoang muttered to the woman, “This is the part that sucks.” I pretended not to hear her. I did, however, acknowledge her when she mentioned the thick legs of the girl and how the girl could “kill” Hoang “with a single kick.” I think, at this point, Hoang may have welcomed that.

The trail we chose, the Van Hoevenberg Trail, actually climbs a neighboring mountain (Mt. Phelps) then crosses a ridgeline to summit Marcy. The first views of anything since Marcy Dam provided a good glimpse of our goal. Through the fog and the clouds, it still looked pretty far off, even if we knew it was less than a mile. The tree line came very quickly, which I’m sure affords some great views on a clear day. Oh well, when I convince Hoang to re-climb Katahdin and Mt. Mansfield on clear days, we’ll just drive west and then jog up Marcy again too. And then we’ll hitch a ride on flying pigs to speed up our descent. 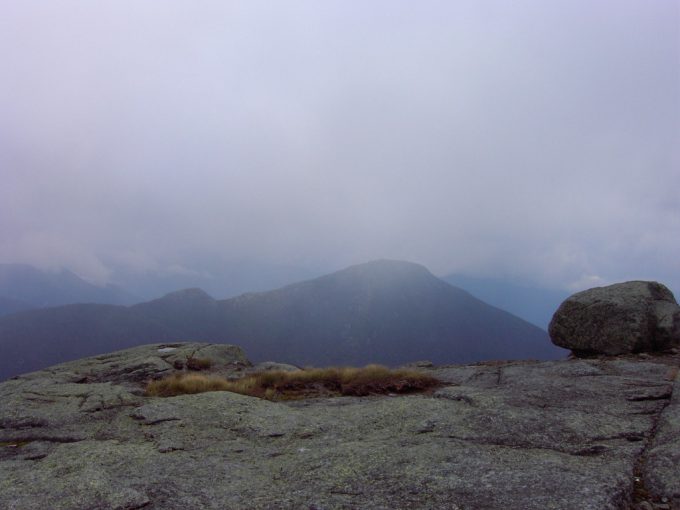 The last section above tree line is the most challenging and rewarding. There were some very short, steep sections, but again, we’ve climbed worse. The winds picked up and the temperature dropped about 10 degrees, but nothing was too unbearable. We enjoyed one last rest before the final surge to the summit and then we were done at 11:30 AM. Or, as Hoang sarcastically exclaimed, “Yay! Only 7.5 miles to go!” 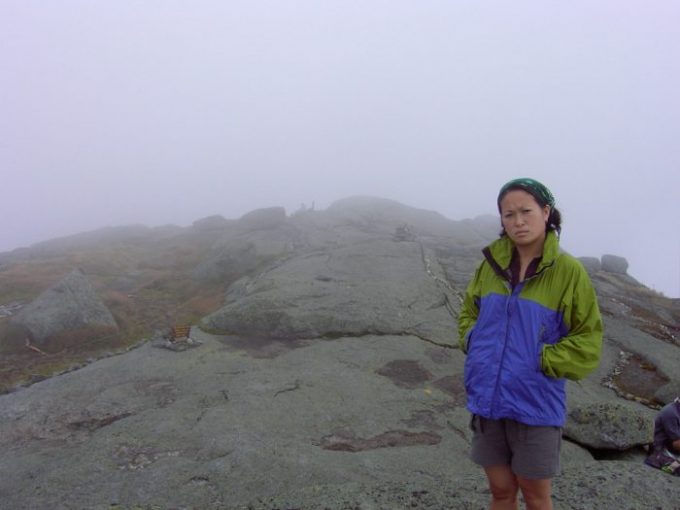 The best, I says

The summit was crowded… a guy on his cell phone, sleeping hikers, and a way-too-happy park ranger/caretaker (This guy absolutely roared past us earlier on the trail. I was happy to find out it’s his job though). He was hassling the hipsters in retro sneakers about the fragile alpine vegetation and those with muddy dogs nosing into everyone’s food, etc. We found a spot out of the wind and I plowed through lunch. Hoang nibbled on some snacks, but was only intent on getting back down. 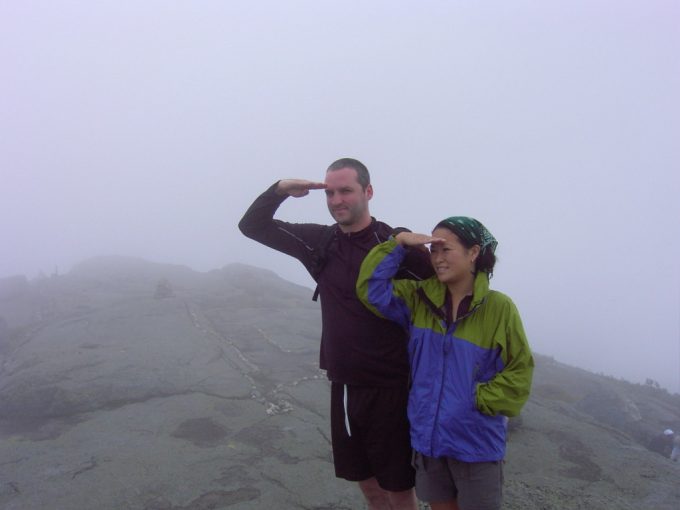 The Montana highpointer guy snapped our photo (the true highpoint was occupied by some kids lying down on it, so we just stepped over it for authenticity). In fact, we were in such a hurry that I didn’t even read the famous plaque up there.

We quickly passed the Montana highpointer guy and I prepared for the next five miles of just trying to keep pace with Hoang. Headache, heartburn, knee pain… None of that matters when she’s going downhill. The girl simply flies. Well, that is until we caught up to the aforementioned couple we had passed earlier. They simply would not get out of our way, but they did at least try to keep the pace high. 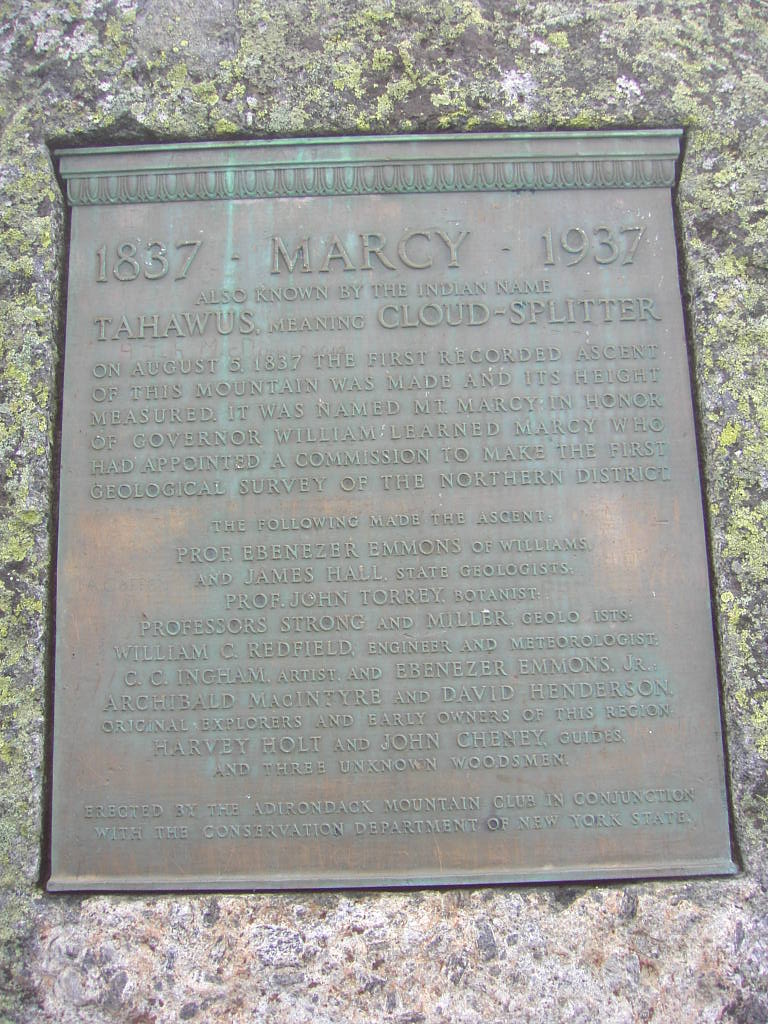 Too bad Hoang’s punishing downhill speed caused the thick-legged girl to severely twist her ankle on a rock. Alas, they finally allowed us to pass with barely a look as she crumpled into a tearful lump alongside the trail. Such is life when a king sized bed is calling to my wife. 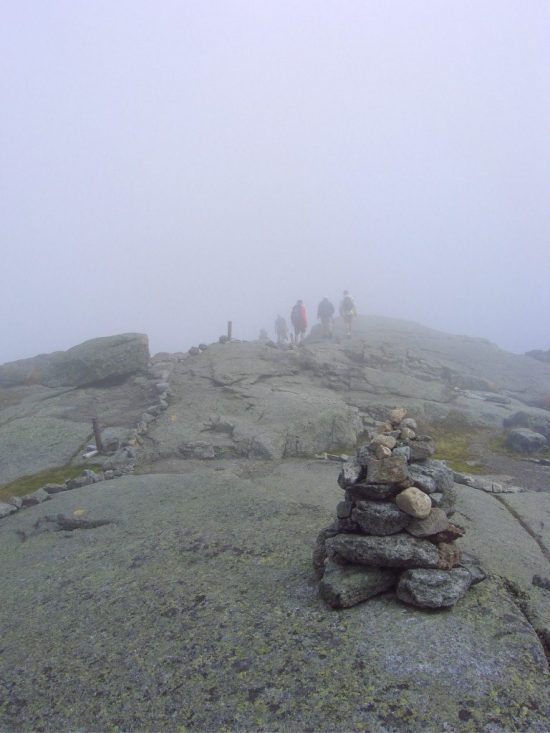 We arrived back at Marcy Dam at 2:20 after passing several somewhat unique hikers. There was the group of 15 Japanese tourists with full expedition packs on, the creepy serial killer guy in sunglasses (note the lack of sun in the pictures) who, we found out later, had ditched his friends several miles down, the withered elderly man whose family was wise-cracking about his heart medication, the middle aged overweight couple in tight jeans (ugh, jeans!), the guy whose knees were so ruined he hiked like Bruce Willis in Die Hard walking on those shards of glass, and the lady who asked us to step aside who appeared to be running, but who never got out of sight from us for 2 miles. 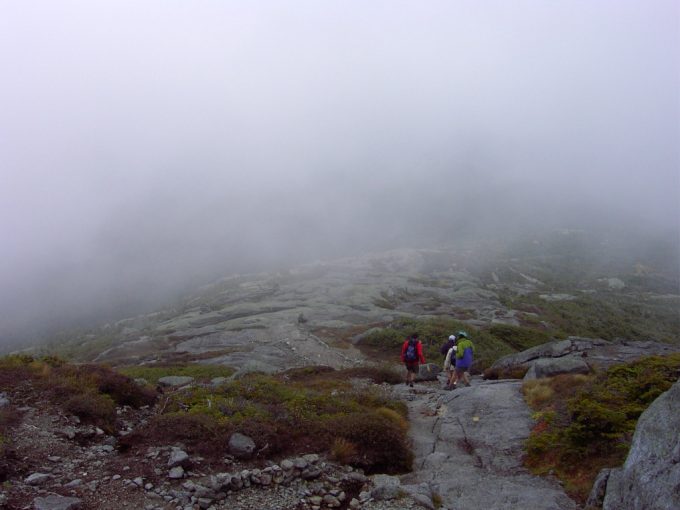 After a day of such quotable quotes as, “I want to throw myself off this mountain,” and, “Who enjoys this crap?” we arrived at the car at 3 PM, shattering the estimated times. Hoang’s knee was hurting her and we were muddy and tired, but we were done our 13th state highpoint. We showered, napped, awoke, dressed and dined at a nice restaurant. The food was excellent and plentiful. It was after dinner and before Ben and Jerry’s when Hoang reminded me yet again why I love her so much; her final quote of the day regarding the hike was, “I’m very proud of myself and will hike again.” 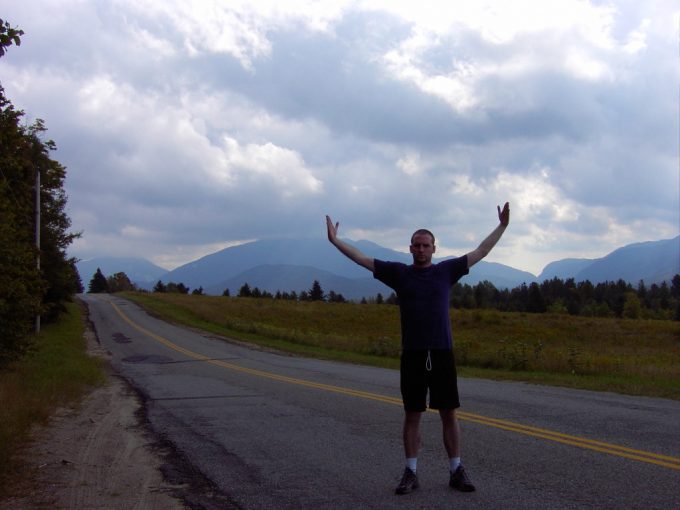