Hm. I’m stumped. I don’t have anything to say about the rural community in north central Connecticut. Other than it’s rural and in the north central part of the state. Ellington, in fact, is very proud and stubborn about its ruralness. If you drive up route 83 like I did to get there, the juxtaposition of the development alongside the road in Vernon and the immediate shift to farms at the town line is stark and startling.

2019 Update: Not anymore. In fact, Ellington is one of the state’s fastest developing towns now. But they still have a lot of farms. This picture is from one of my 2019 Ellington treks. 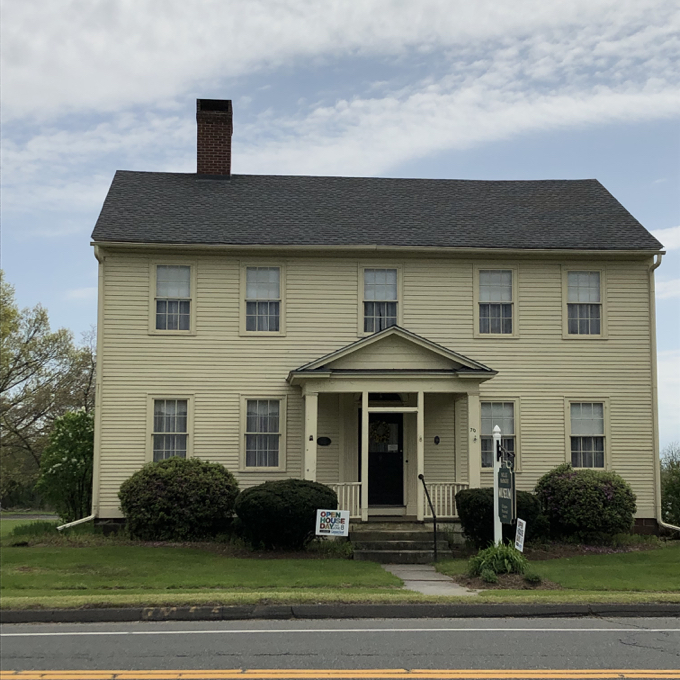 I’m sure Ellington has a wonderfully rich history, but the town lacks for museums. It has a historical society, but not an official town museum. So we’re left with the one, the only, Nellie McKnight Museum in the “center” of the town.

Damian and I hauled up there on a rainy Thursday afternoon during our two weeks of adventure before he changed daycares and I started a new job. This was our bliss; father and son exploring the far reaches and hidden gems around our state. And there’s nothing quite like an old house with a bunch of old stuff inside to get our juices flowing. 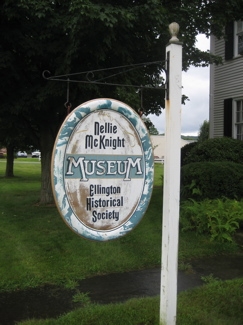 Unfortunately, Damian’s juices were flowing Damian-style, which means he didn’t really care to learn about Victorian fashions or early 20th century milk bottles. It took him a while to warm up to the tour, given by a very nice and very understanding woman who was well-versed in all things Nellie McKnight.

Who was Nellie? Nellie was born the second of six children on July 22, 1894 on her father’s farm in Ellington CT in the house her grandfather built in 1850 at the intersection of Sadds Mill Road and Muddy Brook Road. Geeze, even Ellington’s road names sound straight out of the Dust Bowl. 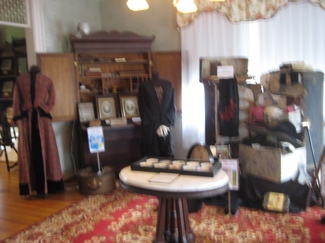 Educated in the local schools, she was graduated from Rockville High School in 1913. Nellie attended Mount Holyoke College in South Hadley MA and graduated in 1917. Nellie taught school until 1929 when she returned to Ellington and became the librarian of the Hall Memorial Library until her retirement in 1967. Impressive, to say the least.

The Nellie E. McKnight Museum, formerly owned by the McKnight family, was built in 1812 in the Federalist style by the Sexton family. It has eight rooms and originally had seven fireplaces. Purchased by Howard McKnight (Nellie’s father) on December 22, 1922, it was occupied by the McKnight family until Nellie’s death in 1981 when it was bequeathed to the Ellington Historical Society to be used as a museum. 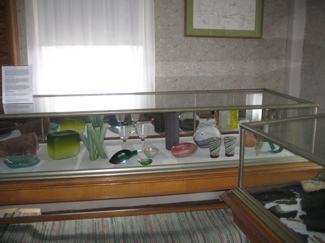 The major renovations occurred in the 1920’s when central heating, plumbing, wiring, hardwood floors, new ceilings and wall paper were added. Two fireplaces were removed and an archway was installed to connect the two adjoining rooms. Of special interest in the house is the decorative wall stenciling in the kitchen dating from the 1830’s.

Nellie McKnight left her home and all its contents to the Ellington Historical Society to use as a museum. Fair enough… So, you wonder, what are some of those contents that are cool enough to get me to drive up to Ellington with a tired special needs three-year-old on a rainy Thursday afternoon? Aha! You’ll see. 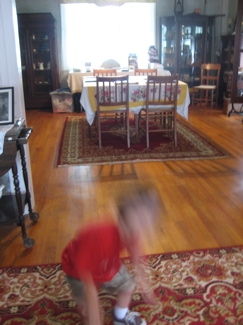 Or not. You see, the brochure I picked up at the museum only explains who Nellie was and not – as I’d hoped – anything about her stuff. And since Damian was such a handful for most of our time there, I didn’t get a chance to snap my usual overabundance of pictures. So we’ll have to file this report under the “Incompletely Described” file. Which is much smaller than I thought it would be. I have a couple tricks I use when writing these things… And since I’m looking to fill space, here they are: 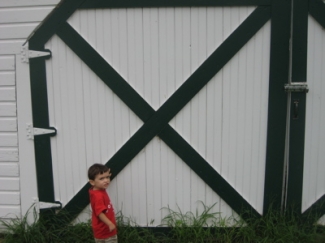 Please don’t divulge my secrets to anyone, lest some jerk starts Connecticut MuseumPursuit in an effort to undermine my efforts. Anyway, checking through my secret tips list, let’s see how I did:

1. My pictures are very limited due to Damian and to the uncomfortable nature of taking a jillion pictures alone with a kindly docent in an old house in Ellington.
2. I picked up the one available, and while it’s a fun read about an important Ellington fixture, it doesn’t help me out right now.
3. I’ve already used up everything the website offers.
4. Negatory.
5. There are none.

So here we are. In an old house with a bunch of old stuff I saw five months ago while corralling an ornery child. I can’t blame anyone but myself, really. And Damian. Everything is usually his fault. Just kidding. 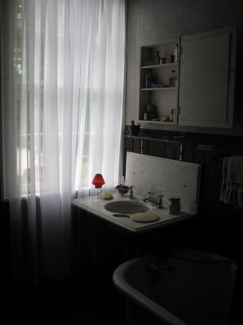 We were greeted at the door by the tour guide who seemed a little confused by our demographic. Eh, I’m used to that by now. And she was actually more pleased than confused. Some workers were working on something at the back door, and they didn’t seem to even notice our presence. We entered the first display room which was, I’m guessing, Nellie’s living room replete with living room stuff.

I should mention that the museum has done a great job with explanatory signage all over the house museum. Had I the time to read it all, I’d be a much better person. Sigh. We checked out a dining room a (I think) and then went upstairs to the bedrooms. Old beds and dressers and a creaky staircase. 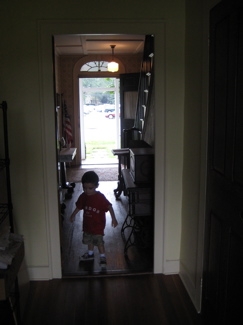 Back downstairs we spent some time in the kitchen which was the coolest room in the house. There were lots and lots of old timey kitchen implements. Better yet, Damian had warmed up to the place and was now having fun walking around and exploring on his own. There was a little knitted cat in a basket on the floor that Damian enjoyed for a while allowing me to talk about with the patient and knowledgeable guide.

Nellie was awesome. Her time as town librarian was one of great growth and town expansion (such as it is). She was always active in all sorts of town activities. Closer to home, she was a master in the little kitchen we were standing in, making jellies out of the fruits she grew on the trees in the backyard. As the brochure states, “Who could forget her delicious, delectable candied orange peel?” No one, that’s who. 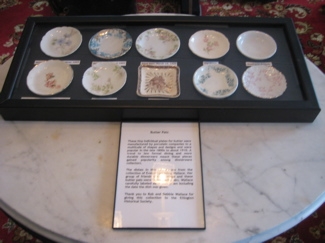 Besides the fruit trees out back, Nellie maintained a large vegetable garden by herself. The gardens have been transformed into more of an ornamental sort, but walking around out there one can easily imagine her out there weeding back in the day.

Aside from cooking and gardening and all that she did for the town, Nellie was also an accomplished weaver. She kept her 4×4 foot loom busy weaving bed coverlets, rugs for her floors, pillow coverings, runners, etc. I like this Nellie more and more. 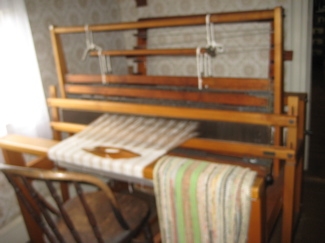 Especially after reading (and yes, this blurb made the biography of her life) that once she found a woodchuck in her garden and dispatched it all by herself with a rock. Whoa Nellie indeed.

That’s it. The Nellie E. McKnight Museum is merely an old house donated “as is” by a beloved town historian and general Miss Everything. But it’s still worth a visit (it IS free after all), especially if you somehow find yourself stuck up in Ellington. 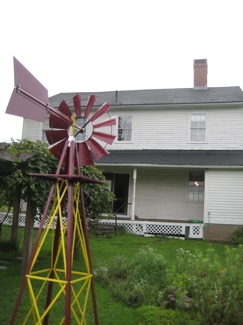 Wait. That’s NOT it. See the little windmill here out in the garden? I have no idea why it’s there, but check this out. I’ll bet you didn’t know that in 1854 Daniel Halladay designed the first commercially successful new windmill in the New World. His windmill had a self-governing design. This means that it automatically turned to face changing wind directions and that it automatically controlled its own speed of operation.

So what, you say? Well, Halladay invented his first successful self-governing windmill in Ellington, and his company manufactured them there from 1854 to 1863! 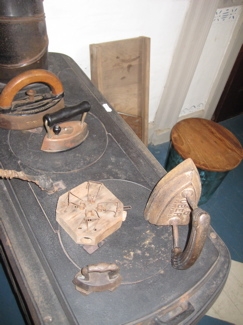 It seems to me that Ellington has fertile ground for another museum.