Somewhere along the CTMQ way, after readers kept pushing me to check out various libraries around the state for various reasons, I finally began to poke around what they have to offer. It’s a sketchy can of worms to open up for a few reasons:

1. There are at least a couple hundred libraries in the state
2. Many have “local history rooms” that consist only of genealogical records and old books – Not CTMQ worthy.
3. Me? Going into libraries? in addition to museums? I may disappear for days.

I’d previously poked around a few library history rooms, but only found one to be worthy of a page here. (CTMQ’s visit to the New Britain Local History Room.) Others, like my own in West Hartford, was not worthy. 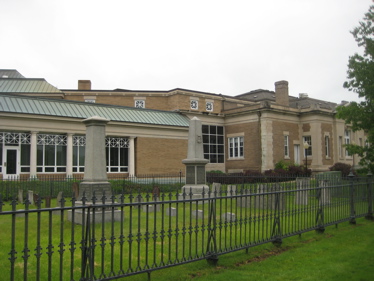 So I have to come up with some criteria here. Let’s say if a library has a town history room or some similar thing, that’s not good enough. They must have either the word “museum” OR have actual exhibits. Not just books and maps, but at least one local history exhibit of items and objects. And not just art hanging on the wall. That seems fair.

Ellington’s entry into the “is it or is it not” race fits the bill. They actually have two exhibit spaces showing at all times. Ellington’s lone museum, the Nellie E. McKnight Museum across the street, lends some items from time to time for the exhibits.

The Hall Memorial Library opened in 1903 as the town’s first free public library. It was a gift to the town from Francis Hall, in honor of his father, Judge John Hall and his brother, Edward Hall, two headmasters of the world renowned Hall School. 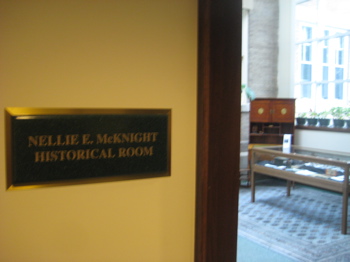 I stopped in after a hike along the Shenipsit a few miles east of the Ellington town green, where the library sits. I proceeded immediately to the Nellie E. McKnight Historical Room, which is a small alcove area connecting the original library building and the newer addition. There are some nice display cases, but it does look a little sparse.

The display during my visit, aside from the few pictures of Nellie McKnight and the early library benefactors, was all about early visual entertainment. Stereoscopes and a Lanterna Magica from the 1890’s. To be honest, I’m not really sure what the connection to the Nellie McKnight House is other than this is old timey entertainment and it fits the time period. 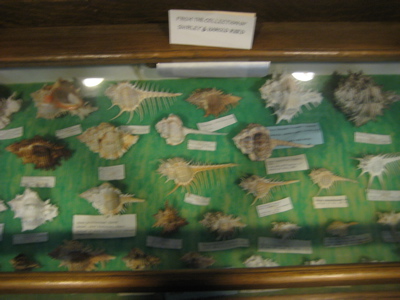 There was a collection of seashells too

Regardless, I always find these things to be pretty cool. The term “stereo” is derived from the Greek word for “solid,” so a “stereograph” is a picture that depicts its subject so that it appears solid. Stereographs feature two photographs or printed images positioned side by side about two and half inches apart, one for the left eye and one for the right. When a viewer uses a stereoscope, a device for viewing stereographs, these two flat images are combined into a single image that gives the illusion of depth.

Stereoscopes work the way that vision works. Since our two eyes are positioned about two inches apart, we see everything from two slightly different angles, which our brain then processes into a single picture that has spatial depth and dimension. Between the 1840s, when stereographs were first made, and the 1930s, when they were supplanted by movies and other media, millions of stereographs were produced. 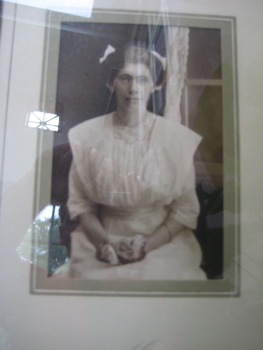 Eventually, stereoscopes ranged from cheap handheld devices to elaborate pieces of furniture which could hold 100 stereographs at once. Of course today, we’re back to cheap and handheld – in the form of ViewMasters.

There was also a “Magic Lantern” there – an early prototype of the modern slide projector. The magic lantern has a concave mirror behind a light source that gathers light and projects it through a slide with an image painted onto it. The light rays cross an aperture (which is an opening at the front of the apparatus), and hits a lens. The lens throws an enlarged picture of the original image from the slide onto a screen.

The one on display at the library was from Germany and employed a kerosene wick to illuminate the image. This is a pretty rad old use of these things. 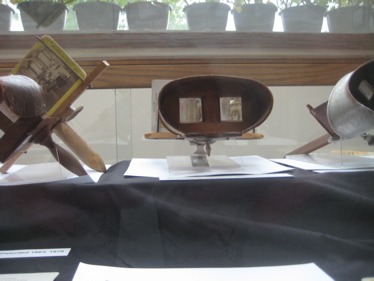 There is another display area at Hall Memorial Library – the main lobby. I wouldn’t normally include such a space, but the exhibit at Hall is worthy – The Windmills of Ellington. As I’m sure all the educated readers of CTMQ know already, Ellington was home to one Daniel Halladay.

And I don’t have to tell you that dating back to 1854 Daniel Halladay is credited with having designed the first commercially successful new windmill in the New World. His windmill had a self-governing design. This means that it automatically turned to face changing wind directions and that it automatically controlled its own speed of operation. 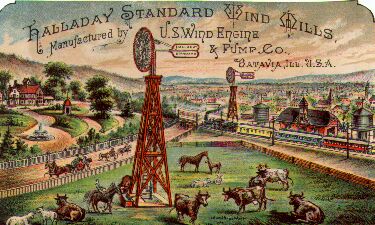 Halladay invented his first successful self-governing windmill in Ellington, and his company manufactured them there from 1854 to 1863. Delays in production and shipping, some caused by the American Civil War, prompted him to relocate the factory to Batavia, Illinois. There, in the Fox River Valley just west of Chicago in the American Midwest, his company thrived. It sold its Halladay Standard windmills by the thousands to farmers and ranchers on the plains and prairies of North America as well as farther afield.

And that, my friends, is the historical fact you didn’t know before you decided to skim this page. You’re welcome.

A fact you didn’t want to know is that there are Nazis in Ellington. That’s right, Nazis. Okay, of course they are just idiotic bored hicks with pens, but as of the summer of 2010, the men’s bathroom here is closed. The reason is that the idiotic bored hicks with pens continually defaced the bathroom – and as this picture shows, at least one bored idiotic hick decided that a swastika would look nice next to the urinal. Since the reason I stopped here in the first place was to use said urinal, the process to get the key was a hassle I didn’t want to deal with. So HEY! Idiots in Ellington – stop it and grow up already. 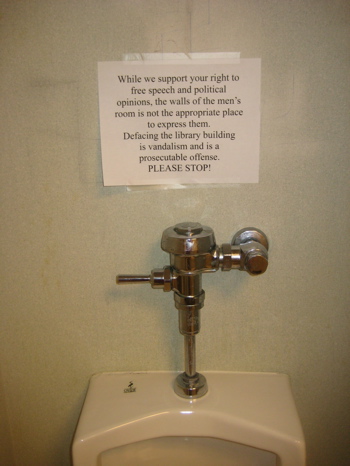 One last note: Per the library’s website: “We are located about 15 minutes northeast of Connecticut’s capital city, Hartford.” Now, it’s no secret I like to drive fast. Way too fast. And I can assure you that to get from Hartford to Hall Memorial library, you’d have to go about 95 mph on the highway to make up for the slower roads to get to the town green.