Here’s the deal: The Bellamy-Ferriday House is only open from May until October like most Connecticut Landmarks properties. But, you ask, you’re obviously there during Christmas! 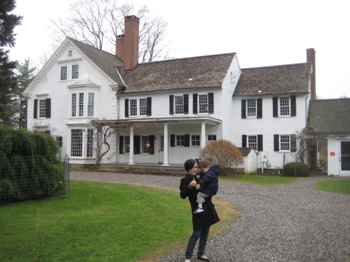 Yup… The house is open during Bethlehem’s Christmas Festival (which is crazy in its own way – my visit here) for a day or two. They only give tours of the 1st floor during the winter, so I’ve sort of waffled on whether I should just wait until the summer to revisit in order to get upstairs. I sat and I sat on the idea – especially since I know I’ll be back to the property to check out the historic garden (It’s part of the Connecticut Historic Garden Trail) someday. [Update: That day has come.] 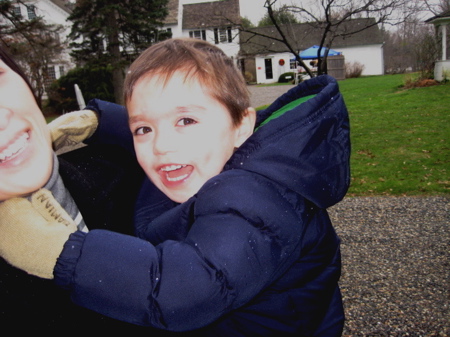 But then I realized that all I’d see upstairs are a master bedroom with the same old bed and the kids’ room with the same little beds and the chamber pot and all the same stuff I’ve seen thirty times before. And so, my friends, you will not see pictures of the upstairs of the Bellamy-Ferriday House. Of course, since this is a CT Landmarks property, depending on the time of day, day of week, month of year and who is staffing the joint, you may or may not be allowed to take pictures anyway.

Why? Who knows. No one’s ever been able to give a compelling reason. That, in addition to the lack of consistency, is irksome. Not to mention that CT Landmarks are notorious for allowing all sorts of “ghost-hunting” clowns into their buildings with all sorts of silly cameras and laptops to play their preschool games, but I digress. 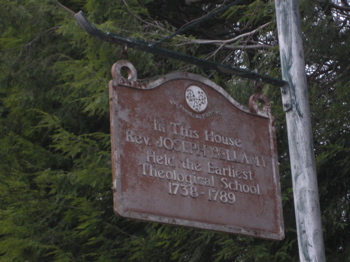 The house’s history and original owner are integral to the small town of Bethlehem. Heck, Joseph Bellamy named the town – so you can probably guess his religion at this point. Bellamy was hardcore. You can learn a lot over on my page about Bellamy starting the first theological school in the US. 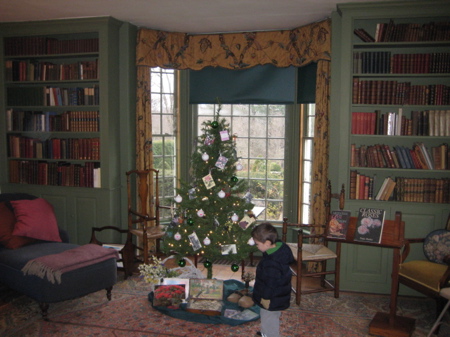 You really should hop over to that page in order to learn about Bellamy’s influence on the “Great Awakening” and religion on early America. (And as an aside, if you’re familiar with “The Great Awakening” and one Jonathan Edwards, you may like to know that there is a monument to that speech up in Enfield. Been there myself.

By now you may be wondering where the Ferriday name comes into play. As you may know, these historic houses have the cool habit of combining eras of different owners to make the place more interesting. Sayeth the CTL’s themselves:

The Bellamy-Ferriday House & Garden embodies the dramatically different passions of two extraordinary individuals: Rev. Joseph Bellamy (1719-1790) and Miss Caroline Ferriday (1902-1990). Rev. Joseph Bellamy, a renowned leader of the Great Awakening, the emotional religious revival of the 1740s, built the house in 2 stages, in 1754 and in 1767, as his family, theological seminary, and stature grew. Architectural embellishments were added by Rev. Bellamy’s eldest son in the1790s. The 100 acre farmstead with numerous outbuildings remained in the family until 1868. 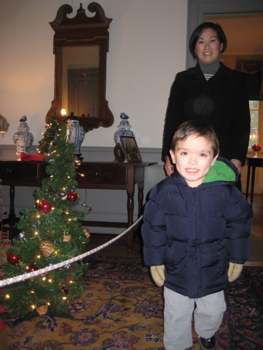 The property went through several owners until it was purchased by Caroline Ferriday’s parents, Henry and Eliza Ferriday, in 1912. The family updated the house with modern amenities and Mrs. Ferriday began reshaping the outdoor spaces by designing a formal parterre garden, introducing a wide variety of fragrant trees, shrubs and perennials, sweeping lawns and evergreens to provide more privacy from the road. Following World War II and her mother’s death, Caroline continued the stewardship of the property realizing that she “had Bethlehem under my skin.” Under her care the rose & lilac collections grew and the property was further refined as a breathtaking combination of natural and man-made beauty. Miss Ferriday, an actress, conservationist and philanthropist supported the Free France Movement during World War II, was a leader in securing help for Ravensbruck Concentration Camp survivors and involved in the Civil Rights Movement. She deeded the property and furnishings to Connecticut Landmarks on her death and most of her property to the Bethlehem Land Trust. 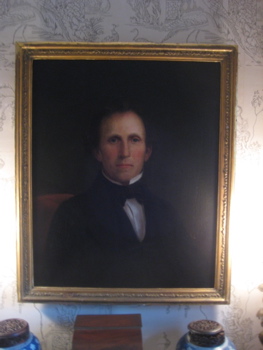 You see? Two completely different people from different centuries, separated by 170 years or so… and the house displays both owners equally. I like that. I also really like this fact they left out: A weeping willow on the property once stood at the grave of Napoleon Bonaparte. When I go back for the garden tour, you darn well know I’ll be seeking this tree out.

As you can see from my pictures, the house was pretty much just set up for Christmas. I wasn’t told to not take pictures until the end of our time there (though admittedly, I was being as clandestine as possible). Think about this – the house is set up beautifully for Christmas with perfect little scenes of holiday Americana… And we’re told to not take pictures. This makes NO SENSE. 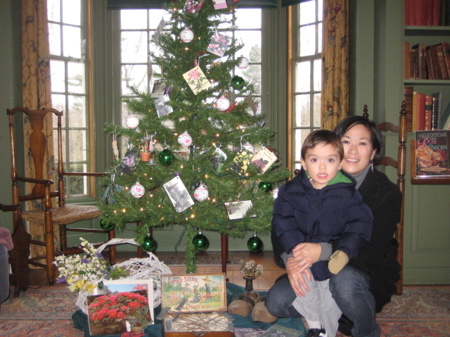 (Actually, I should note that the volunteers at the house during our visit were wonderful. Super nice and friendly and we had fun with them – a well behaved Damian helps with that. AND, we got free cookies and hot cider too.)

…Young men lived in the Bellamy home while he grounded them in his brand of scriptural interpretation and preaching methods. Among future leaders who studied there were Aaron Burr, Jonathan Edwards II, and James Morris.

On April 27, 1744, the Reverend Joseph Bellamy, pastor of the First Church of Bethlehem, acquired land in the North Purchase of Woodbury, which was to become the nucleus of his farm and the site of the manse, his residence until his death. In this house, imposing as befitted the home of “The Pope of Litchfield County”, Bellamy instructed students in Theology and wrote his great tract, True Religion Delineated. 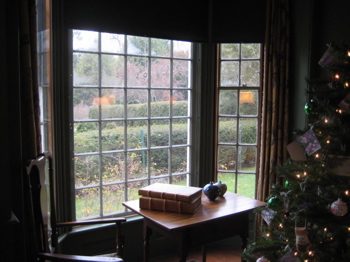 The farmstead, with its numerous outbuildings, remained in the Bellamy family and substantially as Joseph had known it until 1860. In 1880 the Hull family of New York introduced the amenities of Victorian country life with the addition of bay windows, veranda and a porte cochere over the Palladian south facade. The Bellamy Place remained a working farm, while the outbuildings increased in number or were modified to accommodate the needs of the day. 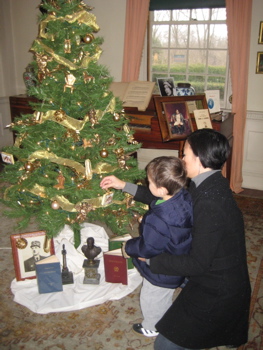 Henry McKeen Ferriday purchased the property as a summer home for his family (his wife and then nine year old daughter, Caroline) in 1912. Following the advice of Edson Gage, a prominent proponent of Colonial Revival Architecture, interior plumbing was added. A service wing containing a “modern” kitchen pantry and servants’ rooms replaced the wash house, buttery, and wood shed. The carriage shed to the north of the dwelling became a summer kitchen and laundry and the former schoolhouse was relocated to the orchard as a playhouse for Caroline. 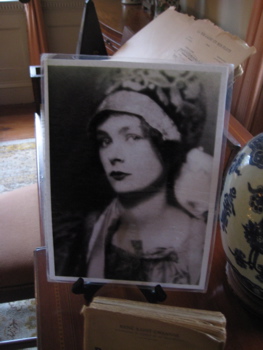 After Mr. Ferriday’s death in 1914, his widow and daughter continued to summer in Bethlehem and to make improvements to the house and grounds. The porte cochere was replaced by a porch and Caroline’s room enlarged to include the bay window which overlooks the formal garden. This garden, begun by Eliza Mitchell Ferriday as the culmination of her planning for the property, was to hold a lifelong interest for both her and her daughter.

Following the end of World War II and her mother’s death in 1953, Caroline Ferriday “realized that I had Bethlehem under my skin…

She began to plan for the future of the property and her interest in Rev. Bellamy led her to “restore” architectural features altered through the years with the help of Frederic Palmer, architect for The Antiquarian and Landmarks Society. In 1969, the south porch was removed to reveal the Bellamy pavilion once more. Greek revival and Victorian mantels were replaced by appropriate eighteenth century examples and the interiors were painted in Williamsburg colors.

That seemed like a good stopping point, but then I read this:

The interiors of the home are as they were when Miss Ferriday was chatelaine, and reflect her heritage and interests. Family furniture, looking glasses, works of art and ornaments are mingled with a collection of Litchfield County vernacular furnishings chosen with a discerning eye by Miss Ferriday and her mother. 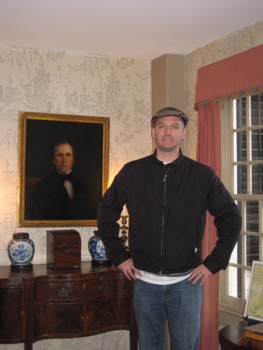 And hoo boy, I have no idea what any of that means.

It’s a beautiful house with two very different, very interesting histories behind it. I’m eager to get back there to spend time in the gardens when the plants are in bloom. You should too. 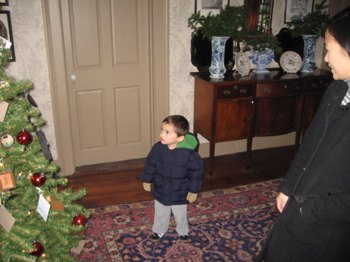