CTMQ > Everything Else > Books, Movies, People, & Stories > ML15. To the Lighthouse

To The Lighthouse… To Climb Up and Hurl Myself Off the Top
Modern Library # 15
1925, Virginia Woolf

Where to begin reviewing the book I wanted to rate a 0, but Hoang didn’t allow it due to the fact that our 1-10 rating scale doesn’t allow for 0’s. How to fairly critique a book that I hated so much it took me over a year to actually read, including the 3 times I tried (I really, really tried) to start it and quit, only to restart again later – after cleansing my brain with other, far better books. How do I justify my vitriol for the book which the Modern Library deemed the 15th best of the 20th century? How do I delicately dance around the idea that I must just be a misogynist and hate all women writers?

Bottom line: To the Lighthouse is abysmal. On top of that, it’s depressing, contains very little in the way of plot or character development, and goes nowhere – almost quite literally – despite taking place over the course of 10 years.

And before you accuse me of just “not getting it,” I’m proud to report that upon finishing, I immediately hit the Intertubes to see if I was correct about what I thought this miserable little tome was supposed to be all about. And for the most part, I was right! I was surprised that I had the central theme nailed, sorted out the timeline and even picked up on the symbolism and overarching themes. Despite the ego-bump, it wasn’t worth it.

This book is so bad that in the year that my wife read it for this project, it was the only Top 100 book she read all that year. As a direct result, 2007 was the ONLY year in this project’s first nine years that Hoang didn’t read the three we agreed to read. It simply destroyed her enjoyment of books for an entire year.

Virginia Woolf attempted suicide several times before finally succeeding later on by – get this – filling her pockets with rocks and walking into a river to drown. That is a terrible way to die and I’ll spare the obvious metaphor regarding her suicide and reading her book, but I’ll keep my suicidal review title. I just can’t change it, although I fully understand Mrs. Woolf was mentally ill and that’s not a joking matter.

Do you really care what this book is about? Well, tough, because first I must write a bit about how Woolf writes Lighthouse. She employs the post-modern stream-of-conscious stylings of others who write far, far better than she – Joyce, Proust, Faulkner. (Yes, yes, I know… All men.) While Joyce can be maddening and impossible, he can also be funny and clever and brilliant. Woolf is none of these. She’s dull and drab and a complete bore.

Many pages are taken up by the protagonist’s (a term I use loosely, as Mrs. Ramsey doesn’t really do anything other than skulk around and wish her husband showed more outward displays of love towards her) rambling inner thoughts. Yes, Joyce did that too, on many more pages, but it was clever. Mrs. Ramsey is just pathetic. And did I mention boring?

There are a bunch of kids (the Ramseys have eight or something) and some friends for Mrs. Ramsey to think boring things about. All this goes down on some British isle at their vacation home which sits across a bay from, yup, the stupid lighthouse. The kids want to go to it, but the weather is bad and therefore they can’t. That’s 100+ pages down; the family sitting around doing stuff, some of them walking around outside, all of them thinking about things, and some wanting to go to the lighthouse and then all going to bed.

And some girl named Lily Briscoe fancies herself a painter and she paints the scene. Or at least tries to.

The second section of this masochistic exercise in literature is by far the best. First, it’s the shortest but also it’s the most narrative, which makes it easier to read for dumb people like me. It takes place in the future, after which a couple of the Ramsey kids have died along with their boring mother. Ooops, did I just ruin the book for you? No I didn’t, trust me. This section is written pretty well and with a bunch of people dead, we at least didn’t have to read their tedious thoughts. Now the house was empty and being cleaned by some old women, and that’s more exciting than ten years ago when it was full of people. Seriously.

The third section is a return to the house (now that it’s been cleaned) by a few of the kids, now ten years on along with grumpy ol’ Mr. Ramsey. Guess what?! They’re rowing out to the damn lighthouse and Lily Briscoe is painting the scene on shore. Or at least trying to, but it’s somewhat difficult because… I don’t know, it just is. I found the entire third section so unsatisfying, so annoying that I – for the first time in our thus-far 9 year project – thought about lying and quitting on a book while saying I finished it.

Think I’m crazy? The original New York Times review of the book, in 1925, had this to say about the final section: ” The long opening portion seems to be carrying you ahead toward something which will be magnificently expressive, and then this final portion becomes obscure, a matter of arcs, of fractions, of uncoordinated notes. By comparison with the rest this final portion seems pale and weak. Perhaps there is a reason for this, perhaps Mrs. Woolf meant to show that with Mrs. Ramsay’s death things fall apart, get beyond correlation. Mr. Ramsay is no longer interesting–can it be because he is no longer counterpoised against his wife? Life seems drifting, as the Ramsays drift over the bay in their boat, and all their physical vigor and all their reaching of the lighthouse at last conveys no significance.”

So basically, a banal and stultifying book becomes more banal and stultifying. There is no use of the word “conclusion” because there is none. And even if there was one, it would be dull and senseless anyway. I suppose maybe Lily finally settling on how to position the horizon and lighthouse and rowboat in her painting serves as the conclusion. I know I was blown away.

I’ve read that Lighthouse needs to be read in large, uninterrupted stretches. And that by doing so, the beauty of Woolf’s language really shines through. To that, I say bollocks. And frankly, the idea of spending 6 hours straight suffering through this tripe is akin to torture. HOWEVER, I did note three passages throughout the book that I believe Woolf purposely planted to leave clues as to how she really felt about her book. Yes, the author was telling us that her book is unreadable and that the joke is on us… 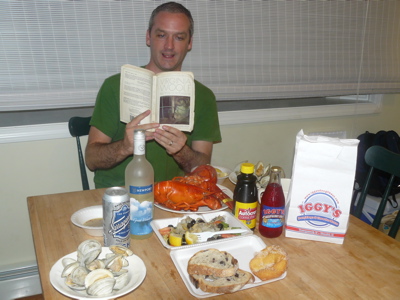 Page 107. The gang is sitting around the table doing nothing (of course) and, “Then Minta Doyle, whose instinct was fine, said bluffly, absurdly, that she did not believe that any one really enjoyed reading Shakespeare. Mr. Ramsey said … that very few people liked it as much as they said they did.” Hmmm, kinda like To the Lighthouse? And by the way, that paragraph goes on for a full page as they moved on to Tolstoy and the whole nothingness ends with, “Now he was thinking, not about himself or about Tolstoy, but whether she was cold, whether she felt a draught, whether she would like a pear.”

Therein is the “brilliance” of this book: She writes the inner thoughts of people! Ugh. The next few pages chronicle Mrs. Ramsey’s hope that no one actually grabs a pear because she really likes how the fruit was laying in the bowl… Amazingly, this passage is cited by the scholars as being important somehow. Anyway, later on towards the end, there is a delightful passage where this Minta girl “felt again her own headlong desire to throw herself off the cliff and be drowned…” Yeah sister, I know. At that point there were 30-some pages to go and if I had a cliff nearby, I might have thought about it.

Lastly, and most tellingly, there’s a bit near the very end about some guy named Mr. Carmichael who had “lost all interest in life.” Woolf writes, from the point of view of, oh I don’t know, I’ll say Lily Briscoe, “What did it mean – that? She wondered. Had he marched through Trafalgar Square grasping with a big stick? Had he turned pages over and over, without reading them, sitting in his room alone?”

If he was reading this godforsaken book, that’s exactly what he did – for months on end.

I know I sure did.