I think this was my third attempt at visiting the little Hoyt Barnum House, a property of the Stamford Historical Society perched up on a little knoll next to the modern police station along a busy road near downtown. The mere fact that this house is still standing, I’m sure, is a testament to those who care about local history. 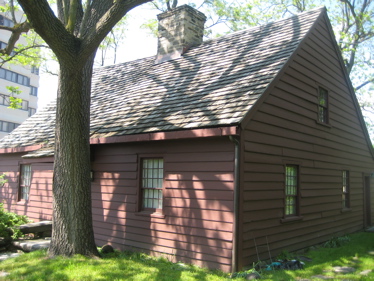 As an “appointment only” joint, timing a visit had previously proven difficult. But I was determined to make it work this time, smack dab in the middle of a daylong outing with Rob C in Greenwich and Stamford. Providing further inspiration to make it happen, was my friend Caroline who happens to live, quite literally, right next door (but not at the police station).

She’s always giving me grief for not alerting her to my Fairfield County visits. So after I posted a note about the day on Facebook, she invited herself along. I contacted Jane Flounder who gives the tours of the house and she was accommodating and inviting. So finally, after 165 museums, I was going to the Hoyt Barnum House. 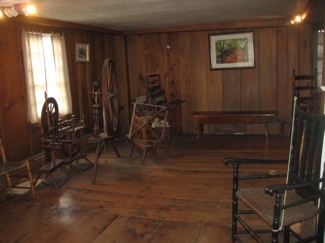 Rob and I had just finished up at the Stamford Historical Society Museum a couple miles away and navigated the one-way streets to the house. There is no parking for the house unless you happen to drive a Stamford police cruiser. So I parked a few minutes away and was greeted by Jane at the door.

Caroline wasn’t there yet, and I didn’t really think she’d care that we started the tour without her. She’s a CTMQ veteran, having joined us at three previous visits in New Britain, Norwalk and New Canaan… Anyway, let’s get some info on this place:

The Hoyt Barnum House is representative of the Second American Building Period, post 1675.

The people who built this house were the children or grandchildren of the founders of Stamford. Their tastes and their sense of relation to England were beginning to change and they were becoming more independent. They adopted English architectural styles into a more American mode. 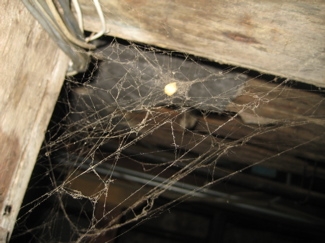 Most of the houses in New England – and in Stamford – were built of wood because it was difficult to make mortar to hold stone together without lime, and lime was in short supply in Stamford. The fireplaces and chimneys were put together with clay and hair, or whatever binder could be found for use with the readily available clay. The chimney in the Hoyt Barnum House is made of field stone and mortar with clay, animal hair, and straw.

In building the house, the central chimney was built up to the level of the first floor. Then the house was framed. The framing was done on the ground, the timbers that joined together were marked with matching numerals. To raise the house, a line of men with long poles would push up one side, another line of men would push up the next side. Wooden pins were then used to hold the sides together. 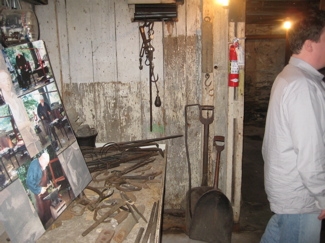 Once the framing was the done the owner (Samuel Hait) finished the structure, probably with the help of family members.

The house is braced frame construction, (post and beam). The foundation is of stone. The large vertical members are called posts, and the horizontal beams lie on them.

The west room of the house is plastered. The east room is whitewashed and the hearth room walls are sheathed with wood paneling, thus showing the various finishing techniques incorporated into the house during its evolution. 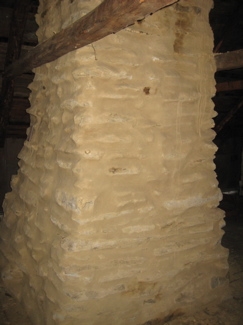 Jane allowed Rob and I to go up into the (empty) attic to check out that hair chimney. Jane also allowed us to go down into the basement to check out the blacksmith area, set up to reflect the earlier times of the house. As a blacksmith, the owner was able to make pewter dishes which, when cleaned, removed the foodstuffs and therefore bacteria. Poorer people used wooden bowls which trapped the nasties and caused sickness and sometimes death. Amazing what a little thing like that did to life expectancy in post-Colonial America. 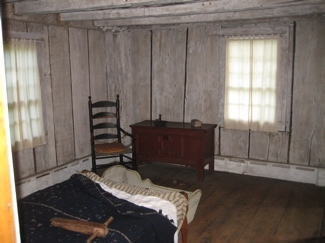 Jane is awesome – she knew all about CTMQ and had some good questions for me about it. She also had the right attitude about our visit – she knew I’d been to 20 other Hoyt Barnumesque houses and pretty much highlighted the quirky aspects about the house instead of the usual patter about the hearth and the “sleep tight” beds. You can take a virtual tour here and get the usual stuff. It’s pretty well put-together.

Nuggets like how the house was inhabited until the 1970’s. And that when they called the cops once during a break-in, it took them 45 minutes to get there even though they can see the place from their building. Things like – oh hello, Caroline just showed up. 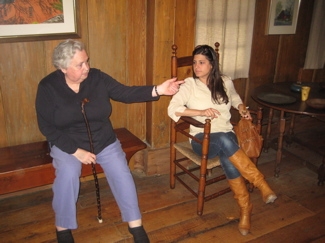 (Oops, sorry… She thought she’d get to see Damian and Hoang. You mean me and Rob and Jane and the Hoyt Barnum House wasn’t the draw?)

We ended up spending half an hour hanging out among the spinning wheels and benches, chatting about the evolution of the historical society – which used to be headquartered here) and local Stamford gossip. Caroline and Jane hit it off discussing what it was like growing up as an Italian immigrant in industrial age Stamford. I enjoyed hearing about the Cruikshank collection of old (very expensive) antique furniture and dresses the historical society holds up at the much bigger building. 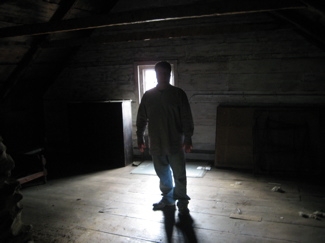 A huge percentage of Hoyt Barnum visitors are local second graders. Not many adults visit on whims anymore, which is a shame. To use Jane’s phrasing, “History and historical house museums just aren’t sexy.” Bah. Look at us! We totally rocked the house (and hence my stilted title.)

Our visit turned out to be the highlight of the day, due to the fun conversation and “insider” insights.

Okay, that’s not true – the highlight of my day was that when walking back to our car with Caroline – who had to run over to Walgreens – a car drove by and splashed her with a muddy puddle like you see in movies. We (okay, I) laughed and hugged and said our goodbyes. We’ll be back down this way soon enough – and next time I’ll bring Damian. 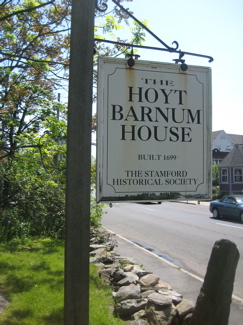