This building is so old and so special and so important, it doesn’t have a real street address. No matter where I look, it’s address is always simply “Old Campus.” Such is the power of Yale. (If curious, it is in the cluster of Yale buildings nearest College and Chapel Streets.) I collected this NHL during a full day of various CTMQ stops, during which I picked off every remaining New Haven NHL but one – Yale Bowl. 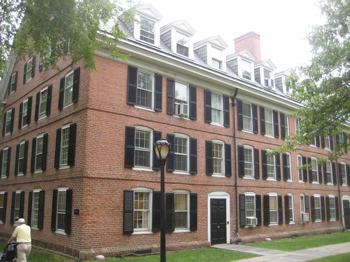 Of course, this Landmark more or less borders another one: the New Haven Green Historic District (CTMQ Visit here).

In a funny way, Connecticut Hall looks like any other ordinary old brick Georgian-style college building in New England – of which there are many. So what makes this one National Historic Landmark-worthy? Oh my, where do I begin?

Built in 1752, it is the oldest building on the Yale campus (in fact its only surviving 18th-century structure) and one of the oldest buildings in Connecticut. Hm. Okay, I guess that’s a good start. The building is the last surviving remnant of the Old Brick Row, the rest of which was demolished after the American Civil War. It has also been known as Old South Middle. That’s so Yale. “I say Alfred, let’s meet at Old South Middle for a spot of tea.”

The design was based on Massachusetts Hall at Harvard University, which I find rather annoying. Why is the oldest most important building at Yale a Harvard rip-off? The building was built 100 feet (30 m) long by 40 feet (12 m) wide, and three stories tall. 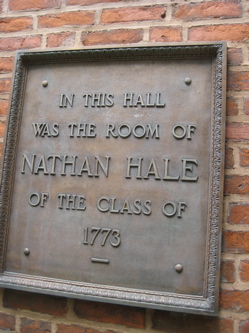 As part of the Old Brick Row, it was known as South Middle and was enlarged to four stories. When Connecticut Hall faced demolition in the early 20th century, the building was saved by a group of alumni led by Professor Henry W. Farnam. After World War II, the building was gutted and rebuilt by Douglas Orr and Richard A. Kimball. It was declared a National Historic Landmark in 1965.

I looked it up, this Richard Kimball was not a fugitive of any sort. (If you’re under 30, you have no hope of “getting” that reference.)

Today it contains the offices of Yale’s philosophy department. Oh cripes. They don’t deserve such an honorable building.

So Yale modeled the building after Harvard, surely some university somewhere took the next step, right? Right: The first two residence halls at Miami University in Oxford, Ohio, originally dubbed “Yale of the Early West”, are modeled after Connecticut Hall. We’ll take it.

Gee, I wonder who lived in Middlesex in The Jungle at UConn?