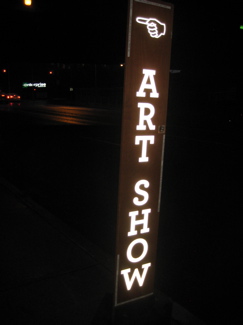 This would be one of the things you’re reading here on CTMQ because I recently (spring/summer 2010) expanded what my own definition of museum was to me. All Hartford ArtSpace is is a large empty room that the artists who live in the ugly loft (but of course!) apartment building on a triangle of land between Asylum Avenue, I-84 and the Exit 48 on/off ramps. Across the street from Hartford’s notoriously crappy train/bus station and east and west of two infamously terrible intersections with Asylum Ave.

There is a parking lot behind the building, but that’s for wimps to park in when visiting exhibitions (if it’s available.) Tough guys like me prefer to find some sketchy potentially free spot within a couple blocks and then dodging Asylum Avenue traffic. It’s just so much more exciting.

So that’s exactly what I did recently, during a night-time summer rainstorm on the last night of the much-heralded Steampunk Art show. Heck, I almost felt bullied into going, what with those I follow on Twitter berating me to check it out before it was too 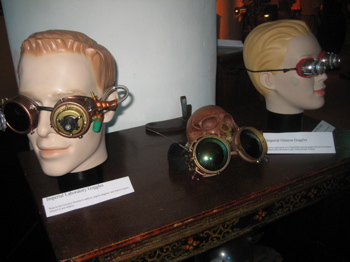 late. But they had a point: If I, and by extension CTMQ, wanted to keep my street cred, I’d have to do more than just park for free in Hartford and dodge the speeding idiots – I’d have to be sure to check out the hipster art event of the year.

Well, that’s not really fair or true. Steampunk’s not really for the hipsters. For Steampunk artists and fans are not the least bit aloof regarding their love for their passion, nor is anything here ironic or post-ironic or whatever hipsters look for these days. Furthermore, the crowd at the show all appeared showered and there was actual good beer on offer (Hooker and Harpoon I believe) rather than PBR. This could be a result of the fact that Steampunk art takes actual money to make and there’s nothing lazy about it at all. This stuff is impressive on a couple levels. 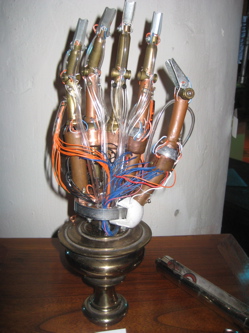 But before we get into it, I can’t let the Steampunkers (or whatever they call themselves) off the hook completely. They live (at least part of their lives) in an alternate future/past universe where giant balloonist goggles and leather dusters are cool. I heard some of the artists and/or fans speaking in fake British accents. Manscara and murses seemed important. However, they all seemed very nice and somehow, despite their goofiness, they didn’t really annoy me nearly as much as hippies, hipsters, goth kids or those idiots who wear their hats sideways with their pants around their knees do.

Okay, fair question: What is steampunk? For once, I like Wikipedia’s definition, even if I only understand half of it: Steampunk is a sub-genre of science fiction, alternate history, and speculative fiction that came into prominence during the 1980s and early 1990s. Specifically, steampunk involves an era or world where steam power is still widely used—usually the 19th century and often Victorian era Britain—that incorporates prominent elements of either science fiction or fantasy. Works of steampunk often feature anachronistic technology or futuristic innovations as Victorians may have envisioned them; in other words, based on a Victorian perspective on fashion, culture, architectural style, art, etc. This technology may include such fictional machines as those found in the works of H. G. Wells and Jules Verne or real technologies like the computer but developed earlier in an alternate history. So wow, okay, you have to be sort of intelligent to think of this stuff and literate. No wonder I liked this stuff.

Steampunk is often associated with cyberpunk. They have considerable influence on each other and share a similar fan base, but steampunk developed as a separate movement. Apart from time period and level of technology, the main difference is that steampunk settings tend to be less dystopian.

So now that I think about it, this show I went to probably didn’t have any art by any ArtSpace dwellers. Maybe it did, I don’t know – but that’s only because ArtSpace Hartford’s website has absolutely no information on any of their gallery shows. Is that hipsterism run amok or just a stupid oversight? Perhaps we’ll never know. 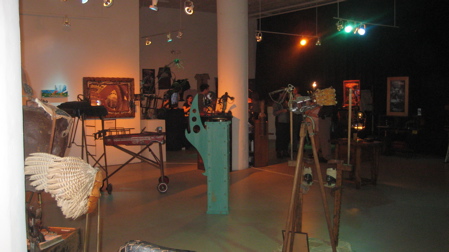 But ArtSpace itself is a cool concept – ArtSpace Hartford offers the best of urban living with affordable living and studio space not usually associated with city apartments. The 46 generous apartments come in one-, two- and three-bedroom units, some with lofts. The 3,500 square-foot gallery/community room is a popular space for art shows, performances, events, and gatherings.

It’s just a crappy old building with large modernized loft apartments for artists. Not a revolutionary idea, but I think a vital one for any city trying to be New England’s Rising Star. (The Colt Building has the same vibe, but it’s not really official over there.) 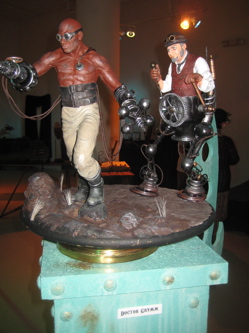 Even though I just mentioned it, it bears repeating: Good luck trying to find out information on current or upcoming gallery exhibitions. Your best bet is when they randomly appear in the Advocate. (As for the ArtSpace Windham and Norwich gallery shows, I have absolutely no idea what to tell you. As for ArtSpace New Haven, they are on the ball.)

The dark and rainy night was the proper setting in which to see the show. I made it across Asylum and entered into the ArtSpace vestibule wherein several people dressed up for Halloween (in July) were milling about and being generally non-dystopian. Nods and smiles were exchanged and I entered the large and open exhibit room. A loud – but not too loud – churning, steaming, chugging electronically driven soundscape was playing throughout the room. It was sort of like those old Trent Reznor exercises to create evil background noise on a few EP’s I have. I totally dug it and was immediately immersed in steampunk-world. 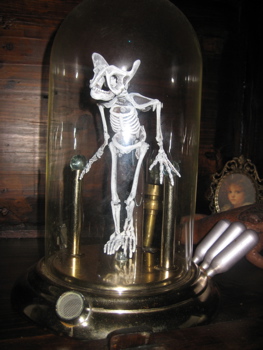 Note: the proper name of the show I saw was “Steampunk Bizarre – The Experiment 2010.” A proper explanation of the artists and their work is here. I suggest you check it out and click on the works, as my pictures (as per usual) do not do this stuff justice.

Almost universally, the pieces are incredibly intricate and adhere to the definition of the artistic movement. Some artists meld their art with fanciful stories, often written in Victorian-lite English. Some were overlong, but it certainly adds to the fun of gazing upon the Acetabulus Paphies by Justin Stanley. Presented as a biological specimen, this fictional creature (something tells me steampunk advocates would take umbrage with my use of the word fictional here. I think they care that much.) is a creepy little alienesque thing.

You can read his explanation of the “little dear” here.

The top steampunk dog, or so it appeared, was a gentleman who goes by the name of Dr. Grymm. The doctor was at the show, milling about in his ankle-length duster, top hat, vest, tie and rose-tinted old-timey glasses. I’m happy to report he spoke 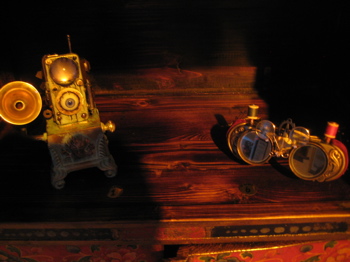 normally and took the whole “movement” as what it is – fun – and not as a lifestyle choice as I feared before seeing the show. He’s also from Middletown and makes props for movies. His skill is apparent and his playfulness within the genre was on full display with such pieces as the Eye-Pod. Get it? Eye-Pod?

I glossed over the more traditional art, like the paintings and drawings. That’s not to say it wasn’t cool and interesting, but really, when you have lifesize mechanical Victorian-cum-futuristic humanoid GoBots and the like, it’s hard not to spend more time on the latter.

I was definitely drawn to the darker realms of steampunk, like the Clockwork Angel and the Tortured Fairy by the Emperor of the Red Fork Empire (aka, Justin Stanley from Rhode Island). And the mechanical hand I took a picture of? Why that’s his “Economical Hand Prototype,” made so that “every able citizen… is able to continue their glorious duty to the Empire.” This is fun stuff.

But back to his Fairy, which came with the following explanation: 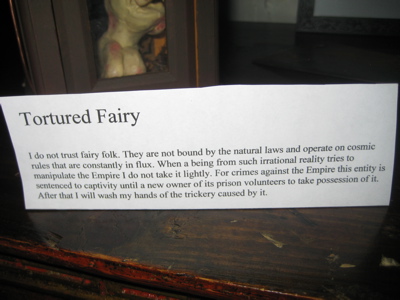 In the alternate universe where I buy into such fanciful creatures, I’m totally down with the Emperor. I would crush those fairy with my mechanical hands all night long.

Steampunk is fun. Art should be fun and interactive at times. While I’m not about to seek out any Jules Verne goggles or unleash my inner evil apprentice, I came away very impressed by the steampunk scene and its adherents. Although they dressed the part, I’m not sure they do that on random Tuesdays at Starbucks. Yeah, that’s right, I bet they aren’t even opposed to Starbucks.

Any art that incorporates books I’ve read, evil skeletal remains and gurgling industrial electronica – with a healthy dose of historical truthiness – is cool by me. And any artist community in Hartford that puts on these shows is cool too. Especially if there’s a random comic hanging in the bathroom that made me chuckle to myself: 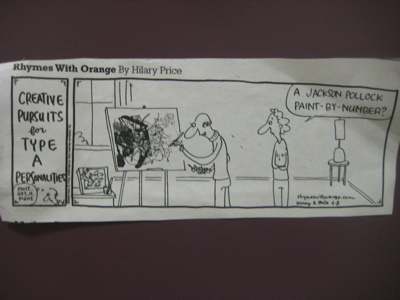 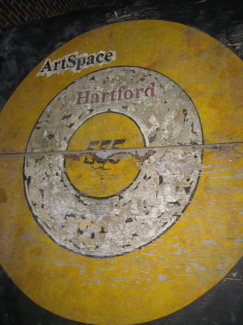 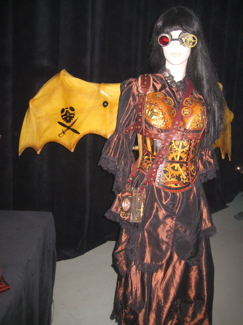