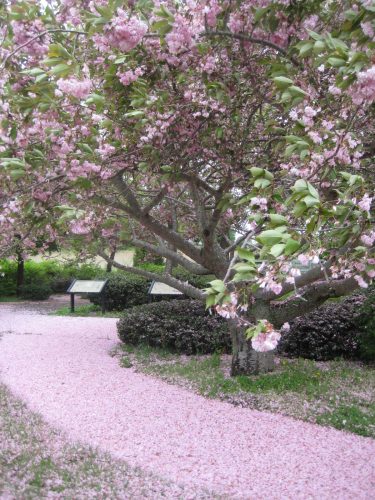 Here’s the deal: This place isn’t a museum and this page isn’t going to get you to hop in your car and drive there. When I originally visited in 2011, I had read/seen it somewhere that someone called this park an “outdoor museum.” And it got on my list.

So I visited. And look how lovely it is with the cherry trees!

I no longer can find any reference to it as a museum, but… I don’t care. In CTMQ-World, this was the 208th museum in Connecticut that I visited. (And now that I’ve published this page, it’s a museum again! I wield such power.)

Besides, this place memorializes the very first military fort in Connecticut (or “southern New England” or “all of New England”, depending on your source)! Whichever it is, no one can argue that it isn’t pretty museumish.

It’s also located smackdab in the middle of one of the more beautiful parts of the entire state, so it’s not like a total bust if you visit.

Fort Saybrook was built in 1635. Yup, Sixteen-Thirty-Five. That was right around when Shakespeare was hitting his stride. Shakespeare! It’s also when the white settlers were hitting their native-killing stride as well. The park is full of historical signage, but since there has been so much history here, they can’t convey everything that has happened over the last 400 years. 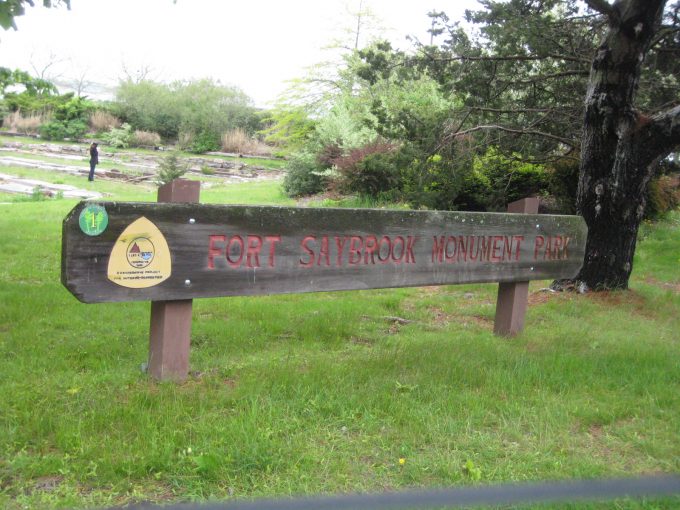 There are multiple sources online that each have a slightly different take on what this fort was – and what happened here over the centuries. As one who has no idea about any of this stuff, I’m just going to cobble together a few of the sources.

The Society of Colonial Wars starts off way back in the day:

Four hundred years ago, the Algonquin-Nehantic Indians occupied a village named Pashebeshauke,” The Place at the River’s Mouth. “Early in the 1600’s, these Indians were conquered by the Pequot Indians from the North.

In 1614, the Dutch explorer Adriaen Block became the first European to enter the river Quonitocutt, or “Long Tidal River.” The Dutch were active fur traders and claimed the river for the New Netherlands. By 1632, they had established a trading post and renamed it Kievet’s Hook (at Saybrook Point).

Okay, that has nothing to do with the fort, but I just wanted to set up the rest of the page (and every other page on CTMQ about Native Americans fighting Europeans) with that cavalier line, “and claimed the river for the New Netherlands.” As if that’s just fine and dandy with the people who were living along it for a thousand years. 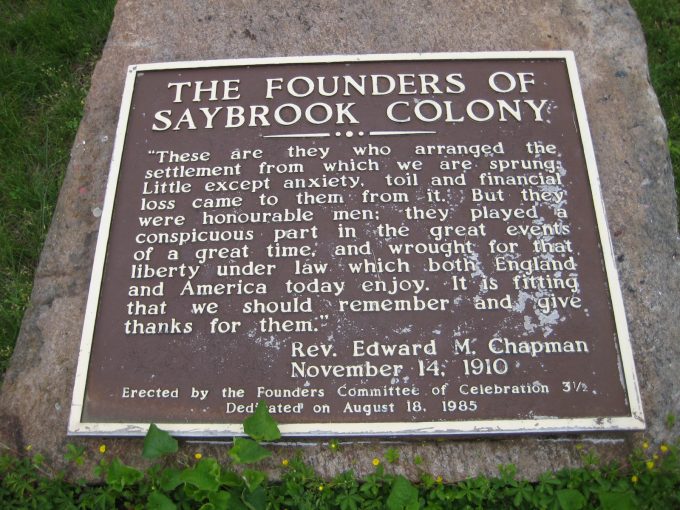 John Winthrop, Jr., was commissioned as “first governor of the river Connecticut” in 1635. Winthrop hired Lt. Lion Gardiner for a period of 4 years to build a fort and lay out a town. Winthrop learned that the Dutch were planning to occupy the English post. On November 25, 1635, he dispatched a vessel from the Massachusetts Bay Colony under the command of Lt. Gibbons and Sgt. Willard to seize control of the Point.

Thus was established Fort Saybrook, one of Connecticut’s oldest settlements and its first military fortification. In later years, it was also referred to as “Fort Fenwick.” Lion Gardiner arrived in March, 1636, to build a strong palisade fort. In April of the same year, Gardiner’s son David was born — the first English child born in Connecticut. When Gardiner left Saybrook, he settled at what we know today as Gardiner’s Island, New York, having purchased it from the local Indians.

The Pequots had been provoked to a war (the first official war in North America), and by February of 1637, the Pequots were destroyed.

If your name was Lion, wouldn’t you give your kid a cooler name than “David?” And “The Peqouts were destroyed” just sounds so… so… so inhumanely accurate. Anyway, Gardiner is honored at the 18-acre park with a 1930 statue created by sculptor William Ordway Partridge. You can read more about his exploits at The Society of Colonial Wars. The guy really hated the Pequots, but was cool with the Montauks and even got an island named after him. 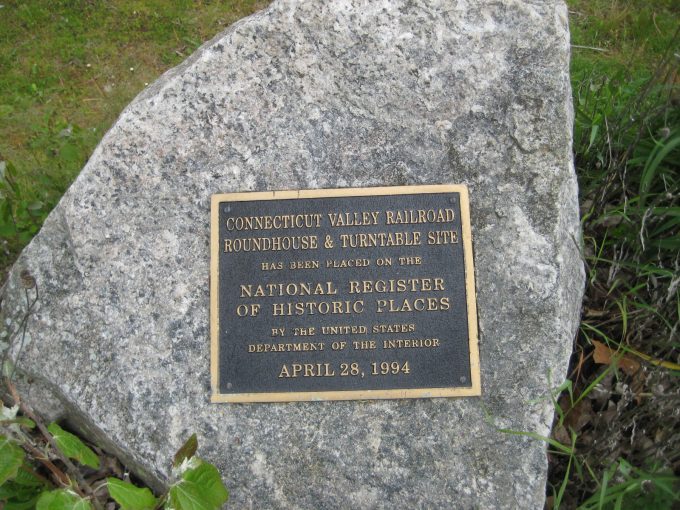 Moving on, Battlefields of the Pequot War also does a good job documenting the site.

Saybrook Fort was the first fortified settlement in New England, built primarily as a place of defense and protection, as well as a refuge for wealthy gentlemen from England who sought political, economic, and religious freedoms in New England. The men who initially settled Saybrook, designing and constructing the fortifications, dwellings, warehouses, and other structures knew each other well; many were soldiers and military engineers with combat experience in the Thirty Years War in the lowlands of northern Europe. The intent was to build, sustain, and defend a thriving settlement in the new world.

That same site delves into the confusion that exists regarding the fort. There was another fort, just across the inlet, at Fenwick. And according to the people who study this stuff for a living, many of the “facts” about Saybrook Fort are either straight up nonsense or just confusion between the two forts. 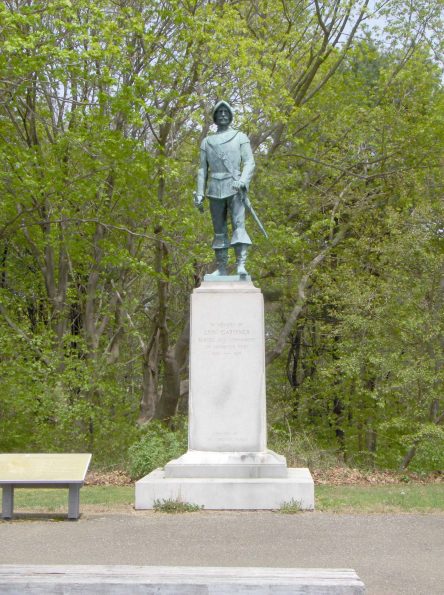 Though they are pretty sure it was the site of some battles during the Pequot War.

Following the August 1636 Massachusetts Bay attack on Manisses, Pequot, and Western Niantic villages, the Pequot retaliation fell on the English at Saybrook. During an eight-month time period, the Pequot killed and wounded more than twenty English at and near Saybrook Fort. The English were attacked when they ventured far from their palisade, and the Pequot destroyed English provisions and burned warehouses while they attempted to interrupt river traffic to Windsor, Wethersfield, and Hartford.

During the Siege and Battle of Saybrook Fort, the Pequot and English assessed each other’s military capabilities, and adjusted counter-tactics. Each side’s tactical modifications show a high degree of sophistication, planning, and ingenuity. Lessons learned during the siege of Saybrook escalated the Pequot War in Connecticut Colony, and indirectly resulted in the attack and destruction of Mistick Fort (May 1637).

That was the infamous slaughter of 1,000 (or so; the number varies) Pequot men, women, and children whereupon John Mason and Lion Gardiner essentially burned them all alive and laughed about it. Good times.

And that’s about all we know about Saybrook Fort. Lion Gardiner built it to defend the area against the Dutch who turned out to not be a problem. The problem was the Pequots who hassled the Englishmen and then got slaughtered for doing so. The original fort burned to the ground in 1647 and a new fort was built north of the original. In 1812, the fort was renamed Fort Fenwick and was armed and manned for battles during the War of 1812. 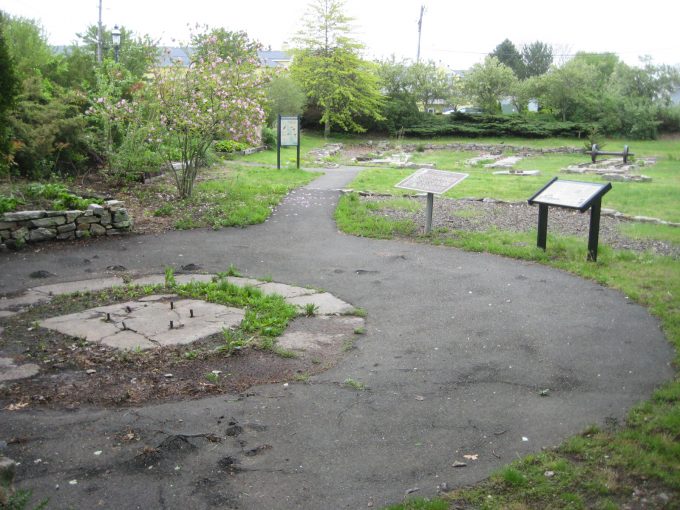 But that’s only half the story here! For lo, the whole place was leveled in order to make way for the new Valley Railroad in 1870! The rail line ran the 45 miles up to Hartford. A few years later, an extension was built to reach Fenwick and its resort hotel.

(A few miles upriver, The Essex Steam Traim travels a snippet of this rail line as a tourist destination today.)

The whole rail thing lasted only a few decades and was scrapped in 1922. Today, remnants still exist in the middle of the fort: a turntable and a roundhouse. It’s all very exciting. 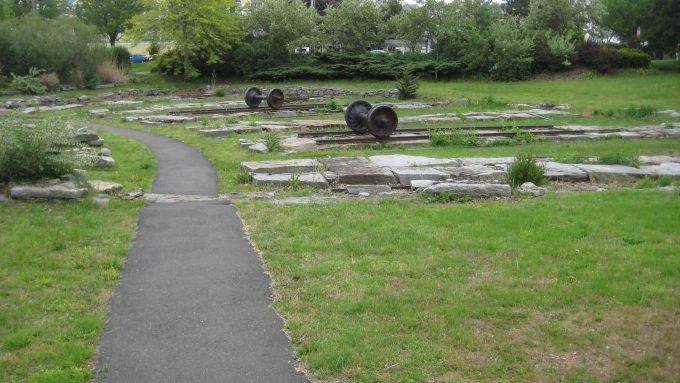 Not exciting enough for you nature lovers? Pshaw. The little park also has an elevated boardwalk that takes visitors out to the tidal marsh with views of the Connecticut River. It began pouring on me during my visit, so you’ll just have to go check it out yourselves.

This place, which is not a museum, has everything a museum strives to have.