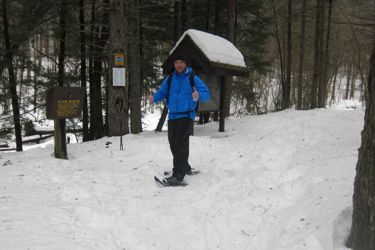 Having completed my hike up and down Slide Mountain, I drove over to continue my day of snow-shoeing the Cats. I missed the turn off of route 28 initially and wasted a good 20 minutes putzing around tiny ice covered mountain backroads.

Note: You want to turn into the Belleayre ski area and head up that road. (A road which appears to be the site of a local battle over massive development.)

I hadn’t done Balsam before (or any of the other two Balsams on the 3500 list – Balsam Cap and Balsam Lake Mountains, which are both higher in elevation than plain old Balsam. But I can tell you up front, I’m looking forward to doing this one again with dry trail and clear skies. Because right now I pretty much hate Balsam Mountain, and that’s just not fair to the poor dear.

Being one of the 3500 Club’s required winter peaks, I figured that I’d have a clearly trampled snowshoe path for my entire hike. I figured very, very wrongly. This turned out to be one of the toughest hikes I’ve ever done – and it was barely over five miles in total! 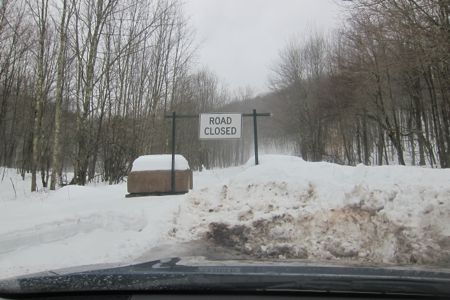 I also don’t have very many pictures from this trek. There are two reasons for that: One, it was pouring icy rain on me for half of it and two, I was so tired after a couple miles that I just didn’t feel like getting the camera out too often. (Again, I had already hiked up and down the highest Catskill peak.) 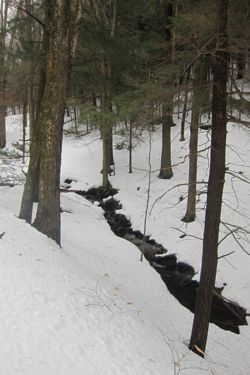 I was, unsurprisingly, the only idiot in the hiker’s lot at the end of Rider Hollow Road. This was certainly not an ideal day for a hike, but I had taken it off from work and I was here so… let’s roll.

The first trail, the Oliveria Mapledale Trail, took me over a well-made and fairly new bridge and then gradually up the initial slopes. I immediately noticed that the trail here was not quite as broken out as it was over on the more popular Slide, but it wasn’t too bad.

After about .4 mile, Balsam summiters can choose to go left (2.4 miles but less steep) or right (2.3 miles and a bit steeper). Being winter, the obvious choice for me was left. An extra tenth of a mile for less steep (and snowy) terrain? Duh.

The trail to the left is called Mine Hollow Trail and wow, it appeared only a deer and one other guy had gone this way in the last couple weeks. As I whined about that in my head a bit, it started to rain steadily. I even saw the deer who post-holed the trail (okay, it was just some random deer) who 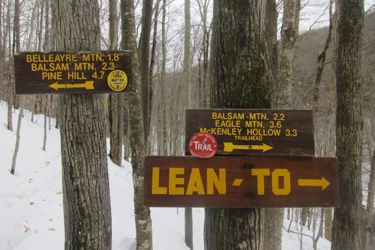 ran away from me, through a few feet of wet snow, bounding up a steep hill across the creek. Way to make me feel inferior, deer.

As the snow became a little deeper and a little slushier, the hiking got harder and harder. My shoes were also now getting pretty wet so that, coupled with the heavy snow that collected on my snow-shoes each step, lifting one’s legs going uphill became quite a slog.

After a left hand turn in an old-growth hemlock grove, the trail got even worse. I could easily follow it, but it could not be termed ‘broken out.” At the steepest parts, which are actually quite steep (again, I’m anxious to do this again in the fall to see if I feel the same way), it became really, really hard.

In slushy deep snow, you sink WAY more than you want to. When you’re ascending steeply, it almost feels like you aren’t going anywhere. And that beats you down mentally. When I finally reached the intersection with the Pine Hill West Branch trail and saw that I still had 1.3 miles to climb, I was a bit crestfallen. 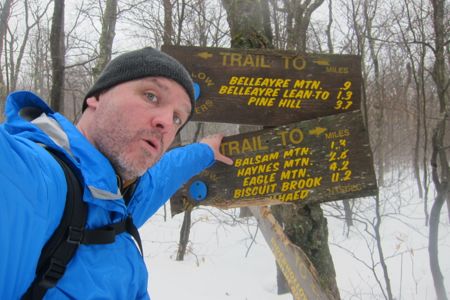 I had no broken out trail to follow, the rain was whipping up again and now that I was out of the hollow and up on the northwestern ridge of Balsam Mountain, the winds just lashed at me. One. Point. Three miles to go in this. This was not very fun.

Reaching the 3,500 foot marker was such a great feeling. This kiss was very real: 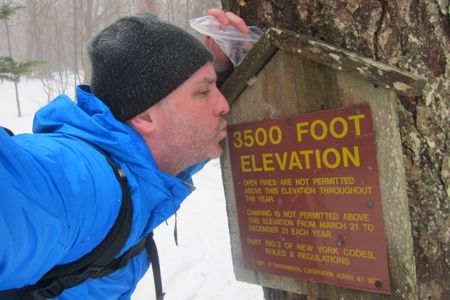 Only 110 feet of elevation to go! And then it was all downhill on the other trail that was surely broken out! I was elated. Hiking south towards the summit requires a little false summit first, but it’s not a biggie. There is a clear view east at some point, but all I could see what gray soup. And that’s when the pouring sleet wasn’t in my eyes.

After the view point, there is a flat and wide section which I can tell is quite lovely in the summer. All the trees up here are beat down from exposure on days like I was experiencing. The true summit is just an unremarkable blip along the trail and my summit picture was supposed to look more exhausted, but I am just too darn good-looking I guess. 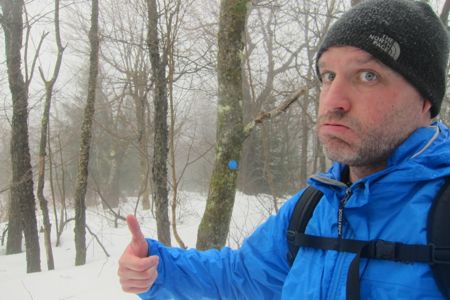 That’s a joke, you wackadoos. Okay… Now it was time to fly down the mountain and… What the?

There was NO discernable trail at all. I yelled. I literally yelled out loud at the mountain. Granted, there were no other humans within three miles of me (don’t tell my wife that), but whatever. I was pissed. 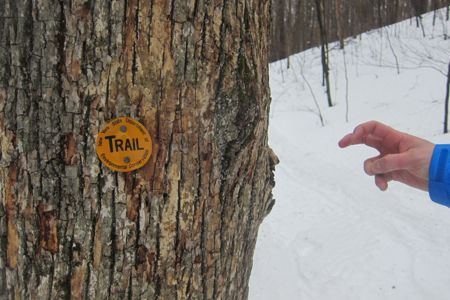 I crossed paths with some obviously fresh bear tracks, too. So that was cool. 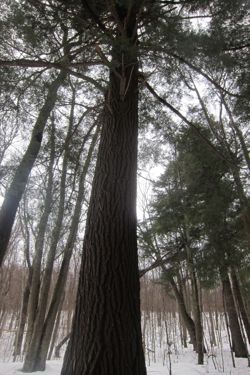 Now, of course you want to tell me that I should have had longer shoes on and you’d be right. But I don’t have longer snowshoes and earlier in the day, I had no such issues. Keep in mind I was surely off the trail here and there (as the spruce traps I stepped into THREE times can attest to) and the snow was slushy for the first foot or so and I was bounding down the mountain.

(If you don’t know what a spruce trap is, it is when a tree has created a bit of a hollow cavity under its unseen branches. You step on what appears to be perfectly fine snow and your leg – or legs – drop down into that cavity. But you can’t just lift your leg up because of the branches. They can be deeper than I am tall in the Adirondacks and Whites and elsewhere, but the ones I dealt with here were “only” up to my belly button. Still, when you are super tired, they are not fun. Here are some tips to extricate yourself.)

Once in the homeslog, I had fantasies of some Boy Scouts staying at the lean-to I’d be passing. Visions of a roaring fire, a rest in the roofed structure, drying my now-soaked feet out a bit… I think I even convinced myself I smelled woodsmoke.

After crossing the stream in the last mile four or five times (again, not so easy in snowshoes), I came upon the lean-to.

The empty and forlorn lean-to. The fire pit had 2 feet of snow on it. 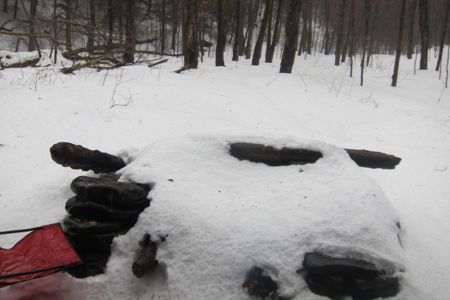 Whatever, man. Just get up and get to the car.

So I did. I changed my socks and shoes and shirts and jackets again and then drove for 45 minutes in order to text my wife that I was alive and dry and well. Honestly, that was the worst part of my whole trip – knowing I told her I’d be done at 2:45 and would text her my status… and not finishing until 3:10 (not bad!) but then the slow/wet/cold clothes change and the long drive to find reception in the Catskills in awful weather.

She was cool about it though and then I drove the long drive home, arriving at 7:15 or so to give my son a bath.

Father of the year right here.