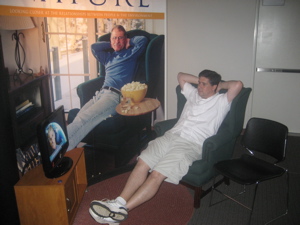 I am a proud University of Connecticut alumnus. I enjoyed my time there and made several lifelong friends – and I continue to enjoy the national powerhouse sports programs. More importantly (to me) is that the state also poured a ton of money into the school’s academics and facilities. The campus is remarkably better than it was just 10 years ago; it’s downright beautiful these days. The University is home to three museums – one for art, one for sports, and one for natural history.

EdHill and I were winding down a day-long MegaQuest at the Storrs campus, but little did we know that August 25th was the Saturday thousands of students were returning to school. Despite entering campus from “the back way,” traffic was still a nightmare. Parking (for free) was worse. But we found a good legal spot and took off for the William Benton Art Museum. 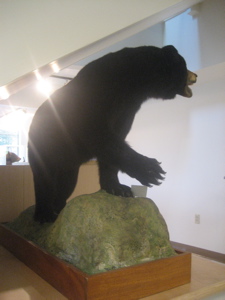 It was closed for some inexplicable reason so CTMQ was still without an art museum on its resume. Our spirits were lifted, however, by the ample views of the scenic “wildlife.” Prepping for the natural history museum was easy with so much “natural beauty” on the way there. Gosh, I never thought I’d feel so old while surrounded by 20 year olds.

Our next stop was Gampel Pavilion, home of multiple national championship basketball teams. We weren’t there for basketball though, we were there in search of the J. Robert Donnelly Husky Heritage Sports Museum deep within the bowels of the building. It, too, was closed but Ed noted a rare species from a distance. There I am, down near the basket we’ve all seen on television a million times… 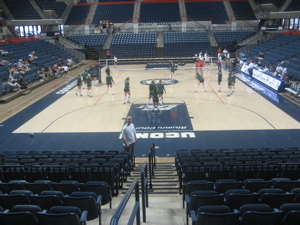 We approached our quarry… quietly… slowly… There! An attractive six foot plus female of the species! Ed was beside himself! 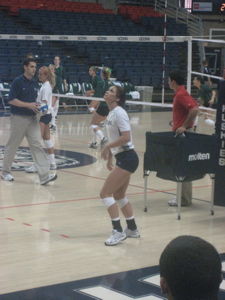 But we had other places to be, and more wildlife to study, so we left Gampel to go to the Connecticut State Museum of Natural History. It was more-or-less right next door.

Back when I attended Uconn, this museum was housed in a different building altogether. I distinctly remember happening upon it one day and spending a good hour there checking out the displays. (My degree IS in Biology after all.) Most notably, there was a huge Great White Shark “swimming” above my 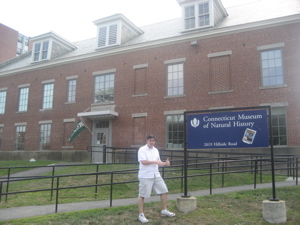 head, hung from the ceiling. It was impressive to say the least (I’ve since learned in my CTMQ research that this shark is the largest on display in New England.”) I was excited to see it again.

Now, the museum is in an old brick building that used to be part of the agricultural school; upstairs was the “Apple Sorting Room.” Sort of a step down from the central location of years past, but it would do. Ed and I entered and chatted with the young co-eds working at the museum desk. They seemed rather surprised to have a) visitors, and b) visitors with ample gray hair.

We got the quick speech about the museum layout and were ushered upstairs to check it out. The girl was very nice and well-informed – and cool enough to let us alone to learn about Connecticut’s Natural History – in (what we very quickly learned) a very unique way. 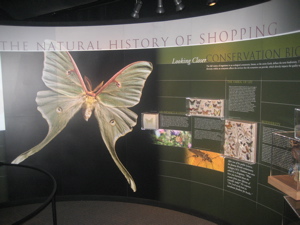 Yes, that says “The Natural History of Shopping” I don’t know what that means either.

This is a very small museum; just one room and it’s very dark and very multi-media-centric. It was hard to get over the shock of a Natural History museum of such small scale. We’ve all been to these types of museums and they are invariably very large; they simply have to be with giant dinosaur and wooly mammoth displays. Here? Not so much. They’ve taken a different approach – one which involves a lot of televisions and video screens. Also, there is a very different take on “natural history” as well.

That’s not to say that it’s a “wrong” take – just different. There are a few different sections to the museum: Archaeology, Geology, Biodiversity, and Climatology – okay. But also “Natural History of Work,” and “Natural History of Comfort” displays. Each display encompasses one wall, so if you’re looking for a thorough study of these things, CTMQ suggests you look elsewhere. But, when you think about it, this place is more-or-less for college students. Pot-smoking hungover college students… attention spans aren’t their strong suit. 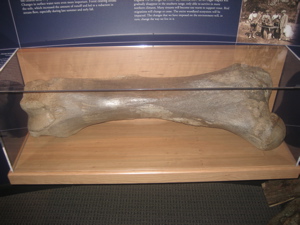 Archaeology: They have a nice Mastodon bone and a bunch of Native American artifacts.
Geology: A nice write-up about the famous New England stone walls and some information on the dominant rock formations of the area.

Biodiversity: Here, a pleasant bird-chirping soundtrack bludgeons you as you read about the importance of animals you never thought were important. But there was some interesting stuff about diseases in the state over the last 400 years; from none (Natives usually died of accidents early back then, rather than disease) to smallpox epidemic to tuberculosis to the more recent Lyme disease, named after Connecticut’s own Lyme.

But all that stuff was expected and presented better at other museums. The Natural History of Comfort area was pretty cool. From the earliest settlers living off the land and building log cabins up through modern times and McMansions. I got to fake-chop wood: 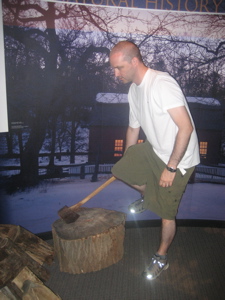 The Natural History of Work was similar; taking visitors through from the 100% DIY ethic of the colonialists to the Industrial Age’s effect on the state, through to the modern DDAFYYLB idiom. (Don’t Do Anything For Yourself You Lazy Bum.) 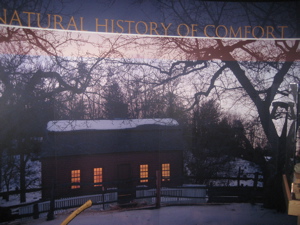 Lastly, the Climatology section was very informative. I’m sure the fake paid-off scientists from Exxon-Mobil would dispute the facts presented, but that’s what they’re paid to do. (Although, re-reading it now I realize it actually is fairly tempered – example: “The burning of fossil fuels, especially since the 1940’s, has amplified this natural trend, leading to present concerns about global warming.” 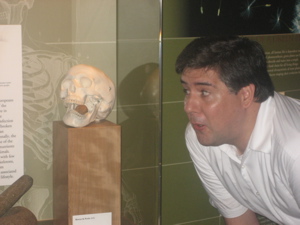 It went on to say, “Climate scientists are in agreement that the New England climate will continue to warm significantly. By the end of the 21st century most of New England will no longer have a 30-day seasonal snow cover. Sugar maples will gradually disappear in the southern range, only able to survive in more northern climates. Many streams will become too warm to support trout. Bird migrations will change or cease. The entire woodland ecosystem will be impacted. The changes that we have imposed on the environment will, in turn, change the way we live in it.”

Phew. To top off the somber mood that display left us in, the shark was gone! Sigh. I asked the girls about it and they seemed a bit clueless, noting, “I don’t know, like, it’s probably in like storage somewhere.” How could the museum so flippantly discard the largest fish display in New England like that?! Ed and I left out into the warm sunshine surrounded by youthful idealism, hoots and hollers of friends reuniting after the summer, and lots of really hot chicks.

Cost: Free
Hours: Tue-Sat 10-4
Food & Drink? Kegger on Frat Row!
Children? Yes! (See comments below)
You’ll like it if: You take your comfort seriously
You won’t like it if: You are a global-warming denier
Freebies: None 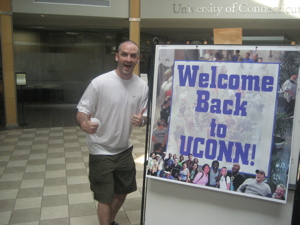