It’s probably unfair to all three of these deceased folks to lump them all together onto one page, but if life isn’t fair… then death is even less so.

At least this first gentleman, Edward Bouchet, appears elsewhere on CTMQ – on the much more important Connecticut Freedom Trail in New Haven page.

This guy was super impressive. 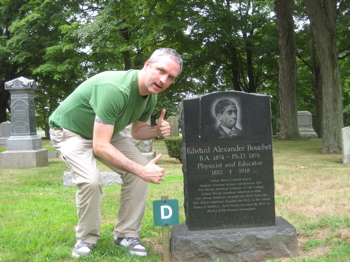 Bouchet was also among the first 20 Americans (of any race) to receive a Ph.D. in physics and was the sixth to earn a Ph. D. in physics from Yale.

As I navigated the littered streets of southwestern New Haven, I realized that I had never looked up where this guy’s grave was. On top of that, Evergreen Cemetery appeared closed, which of course made no sense. However, the Winthrop Avenue entrances were closed, most likely because the neighborhood on that side of the property is, um, … it’s not the most celebrated section of New Haven.

So I drove all the way around the cemetery to Ella Grasso Blvd and entered the open main entrance. Realizing I had no idea where to go (and this place is an absolute maze of roads), I sheepishly entered the office and thankfully found a map of notables buried there. Most notably, Dr. Edward Bouchet.

The monument to Dr. Bouchet in Evergreen Cemetery was unveiled in October 1998 and props not only to Mr. Bouchet, but also to whomever recognized his importance.