This is one of Satan’s favorite haunts here in Connecticut. Surely because of the road’s unique name and rather dicey twists and turns, the ding-dongs who believe in such things pretend that spirits haunt this road. Anyone who knows me knows what I think of people who promote such childish foolishness, so I’ll leave that alone. 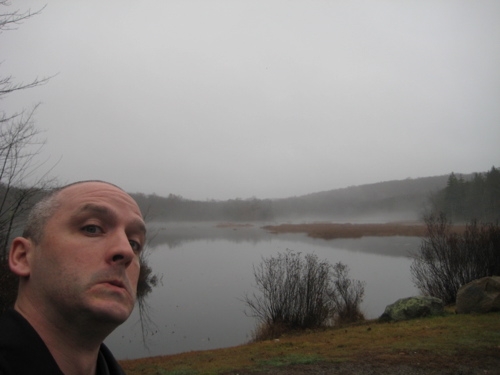 I put my life on the line here on my way to speak at the New England Museum Association in Warwick, RI – so I drove the road around 7 AM on a cloudy day. The turn off of Route 49 is tricky because, as you’d expect, kids keep stealing the sign so there is none to guide you. The first bit passes residential homes and is your normal pastoral road, with old stone walls all along the way.

Once past the homes, I’ll admit, the road turns to hell. And goes down into a hollow. More specifically, it becomes a potholed skinny little road twisting through the dense Pachaug State Forest. With the fog and the solitude, yeah, I guess an impressionable five-year-old could call it spooky. Here’s a typical description of the area:

It is reported that Hell Hollow Road obtained its name because in the 1600s, a little girl named Maude was killed by English soldiers. It is said that one could, and reportedly still can, hear the screams of Maude being murdered throughout the woods. Because of this act, people of the day believed the forest to be haunted and that it was host to witchcraft and satanic rituals, thus houses were never built in this area. The land was taken over by the state and is now a vast area for hiking, biking, nature walking and the paranormal.

Assuming Maude was real and was “murdered by British soldiers” (dubious, at best), why do people like this need to tag on, “and the paranormal” at the end. So silly. Both the Pachaug and Quinebaug Trails – get this – cross the road and go along it AND INTO THE HAUNTED WOODS! 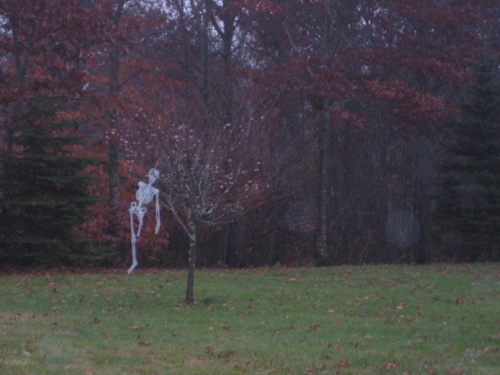 Fortunately, there are other more reputable sites out there with the real story of the unique name and the legends attached to it. Bottom line, it’s named Hell Hollow because the land was/is horrible for farming, and back in the day, this is how they designated such places. The “murdered girl” was a little baby who died naturally and the family buried her elsewhere. All the other “Maude” stuff is pure nonsense.

So please, read this Excellent site with true stories about the road and ignore all the corny “ghost hunter” type sites.

UPDATE: I was so drawn to this place I returned to hike the two trails that traverse this road in December, the Quinebaug and Pachaug. I hiked around the pond, I walked through the actual Hell Hollow (twice!) and then walked down Hell Hollow Road for a mile. I also drove its entire length (no sign on the eastern end either) and can report that I didn’t get mysteriously murdered – or even haunted just a li’l bit.