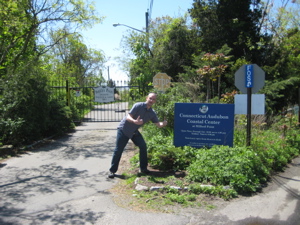 The irony was not lost on myself nor my traveling companions for the day (Rob and Yvonne); that is, on the way to the Audubon Society Center we passed a bunch of huge invasive Monk Parakeet nests along the coastline – (CTMQ report here!) Monk parakeets, of course, are an odd sight to see (and hear) in New England… but we were going to learn about some more familiar birds at the Audubon Center.

Milford Point marks the second (of seven) Audubon Centers in the state (CTMQ’s visit to the Glastonbury Center) and it’s location makes it unique. Milford Point is a spit of land that curls westward at the mouth of the 149-mile-long Housatonic River, where freshwater meets the salt of Long Island Sound. It is a biologically rich area of varying habitats, including more than 8 acres of barrier beach and the adjoining 840-acre Wheeler Wildlife Management Area, a salt marsh.

Finding it is a bit of an adventure, as one must navigate the spider webs of a typical Connecticut coastal community. If you go, my advice is, “Just keep driving.” You’ll eventually get there. Once there, we chose to walk the boardwalks outside the building; one goes inland to the salt marsh and one goes the opposite way, towards Long Island Sound. 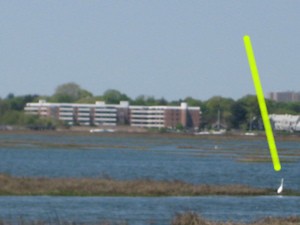 On this particular (beautiful) boardwalk, we read signs about the slow demise of Piping plovers and Least Terns. I took a picture of the sign offering up possible explanations for this, but I can hardly read it. I’m quite confident it comes down to developing nesting areas, litter, and diminishing food resources due to various human impacts.

Here is what I can glean from my terrible pictures: Piping plovers are small and can live up to 15 years. The do the broken wing act to distract potential predators from nests and are a Federal “threatened” species. Here’s a sad little pan-flute accompanied video about the cute li’l guys from Canada where they say “plover” like “Plahver.”

And while I’m at it, here’s a similar video (without the bad music of funny pronunciations) about the Least Tern:

So please, you jerks, try to avoid crushing tern eggs. And littering and all that good stuff. Thanks. We walked back to the nature center building and went up the winding staircase to the roof outlook. This 70-foot-high covered observation tower provides panoramic views of marsh, river and Sound. 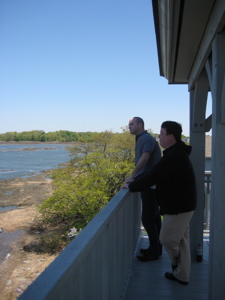 Inside, we were greeted by a very nice woman who was eager to give us a “tour.” This was sweet and all, but the center is essentially one room with a few animals and plenty of descriptions… I thought. We immediately gravitated over to the “Osprey Cam” which was actually trained on a LIVE OSPREY. Yet another animal I’ve wanted to see for years and now have… So thanks to CTMQ, I’ve now seen a wild bald eagle, black bear, and osprey. All in less then a year… Awesome.

Connecticut has plenty of all three animals, but hey, I just hadn’t seen them before. I walked right by two coyotes recently too, so really I’m down to a bobcat and I’m all set. 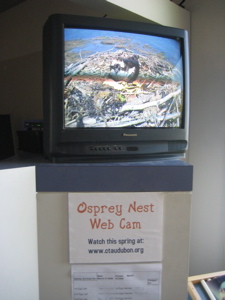 Walking around the center, I was once again struck by the massive flat screen plasma television. I note that the other Audubon Center I’ve been to had a similarly sweet set up (This is not it to the left! This is the osprey cam monitor.)

The rest of the place was just what you’d expect… though our guide was exellent and very gracious even when I asked my stupid questions. There are tanks of local fauna; exhibits on the ecology of the Long Island Sound and the estuary at the mouth of the Housatonic. A salt-water tank that displays many of the smaller creatures of the Sound, including mollusks and fish, is always a crowd pleaser. And so, I offer you the lazy-man’s report – through photos: 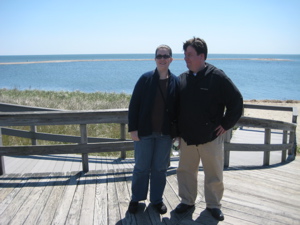 We saw lots of birds. Including, ahem, lovebirds Rob and Yvonne. 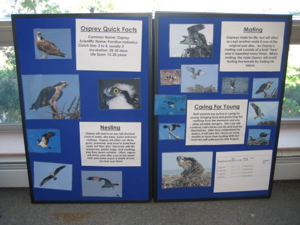 All about the Grand Ole Osprey! 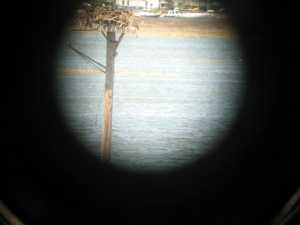 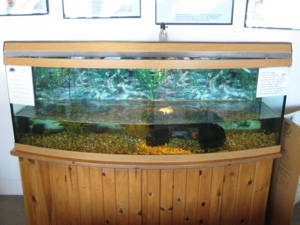 Terrapin tank – she was a beaut. 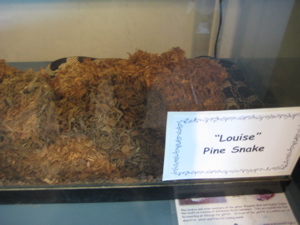 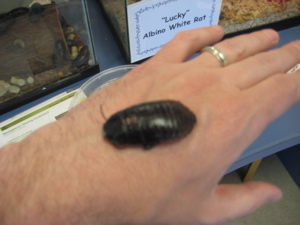 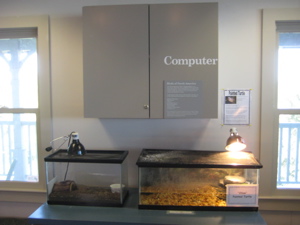 So you’re a robber and you want the good stuff, like the computer. Where oh where could it be? 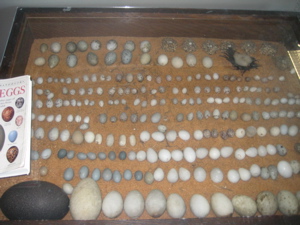 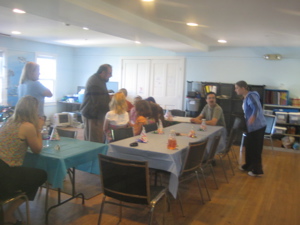 Some kid was next door having a birthday party, totally hoarding all the live animals. So I took a picture of their fun with the “guilt flash” set on high.

The boardwalk into the salt marsh again offers some interesting signs to read and not-so great views because of the factories and things across the marsh.

I thought this place was really very nice and an isolated little enclave in to escape to after sitting on I-95 for hours, as the people who live here do every day.

— Thanks to this story I borrowed liberally from. 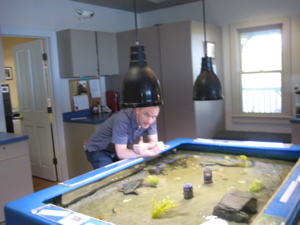