A Museum For What Ales You
Coventry (Google Maps Location)
May 20, 2007

I left the Brick School House Museum across town feeling a little parched. I figured a nice cold beer would be nice so I ventured east to the Strong-Porter House. Mmmm, a nice strong porter would really hit the spot! On the drive over I passed two historic buildings that I stopped to check out. It turns out that they are the Connecticut Glass Museum, which is only open during special events. I would think a visit by CTMQ would qualify as a “special event,” but apparently not. Hurrumph. 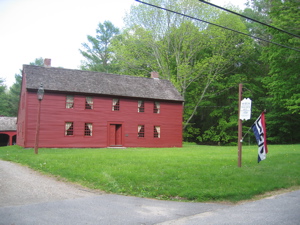 I wound my way through Coventry’s back roads, with mouth watering as I drove nearer. I passed yet another random museum, the Special Joys Doll and Toy Museum – there were a few cars in the lot, but I thought to myself, “No way… EdHill would kill me to know I went to look at antique dolls without him.” I continued onward through fields and forests. Road Closed? Argh… time for some off-road action. The detour would have been a pain, so I picked my way across the rocks, potholes, and dips and shortly thereafter arrived at the Strong-Porter House. 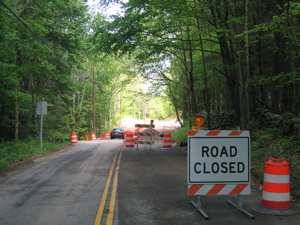 The dirt road gave my trek a definite 18th-century authenticity.

What a handsome house! Actually, it looks exactly like every single other old 18th century colonial house in the state – which is fine with me. I drove into the driveway and parked behind the one car there. Teasing myself and my thirst, I refused to go inside right away and instead walked back to a sign in front of the ruins of a foundation. 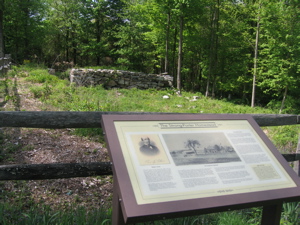 An Eagle Scout cleared the brush and overgrowth away a few years ago to reveal the old ruins of the orignal 1700’s barn that burned down in 1890. There was an interpretive sign there, explaining how the Strong-Porter house was originally built in 1730 by Aaron Strong, Nathan Hale’s great uncle. (The Nathan Hale Homestead is a half mile up the road). Later, in 1758, the Porter family bought the dwelling and expanded it. There was a point in the late 1700’s when 21 Porters lived in the house. No word on whether they had porters living with them as well. 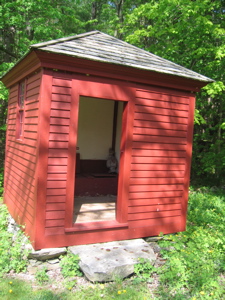 I walked across the grass to the outhouse and learned all about it’s history. It was quite a nice outhouse and has quite a story. There are multiple privy holes, including one for a child (“The cutest thing!” gushes the sign inside.) It’s actually called the “Lytle House” and spent many years up the road at Nathan Hale’s house. In the late 1980’s the movement began to move it back to its rightful home and it wasn’t until 2000 that everything was approved and the financial support was secured to restore the Lytle House.

I then checked out the carriage shed and the little vegetable garden as well. There was a stone monument there which said that the Strong-Porter house was Nathan Hale’s mother’s house. Hmmm, but I had already read it was actually his great aunt’s house. Why the confusion? 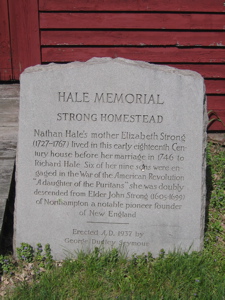 As it happened, the same antiquarian named George Dudley Seymour who bought the Nathan Hale House also bought this property in 1930 for historical purposes as well. The funny part is that he bought it under the incorrect belief that it was Hale’s mom’s house. It wasn’t until a 1955 discovery that proved Mr. Seymour wrong. Hale, Schmale – I was here for some strong porter and a museum is a museum to me, so I walked to the entrance out front.

Crrrrreeeeeeeeaaaaaaaaaak – I pushed open the door and looked around. A woman came down the steps to greet me and seemed a little confused as to my presence. I signed in the guest log and immediately figured out why… I was the lone visitor that day, and there had only been one other in the last month. I may have awoken her from a slumber; “Have you been to the Strong-Porter House before?” she asked. 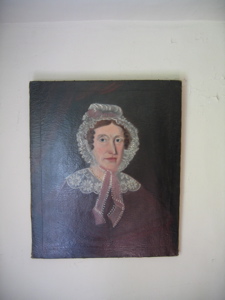 No, I had not. Nor had I even heard of it before randomly selecting Coventry to visit that morning either. So show me the way, kind lady, show me the way. She led me up the dark and skinny stairwell and launched straight into the tour. I was immediately struck by her similarity to Simka from “Taxi,” both physically and emotionally. (I mean that in a good way; she was very nice and kindly, just kind of timid and wary. Then again, she was all alone in this old house that apparently gets one visitor a month with a tall doofus taking lots of weird pictures. So, fake-Simka, you’re alright with me.)

The first painting was the now expected “Unattractive Lady Portrait,” above. This one was of Fanny West – a woman whom I know nothing about. Other than she was unattractive, that is.

All the paintings and furniture were covered in sheets, so Simka dutifully removed them all, explaining each piece. The next one was the coolest; a street scene from Coventry from a couple hundred years ago. Hey, I know that church! Right out on Route 44, the Second Congregational Church of Coventry. The area around the church today includes a Dunkin Donuts and a supermarket. Here, I’ve recreated the scenes: 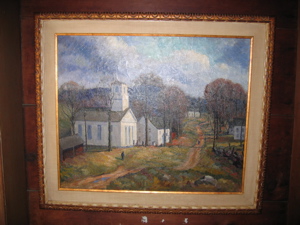 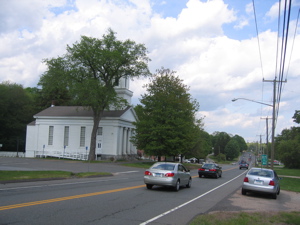 We moved from the top of the stairs into a little bedroom. There was an odd assortment of things here: A loom, A dressform, a giant dollhouse, and a barn model. The barn, it turns out, was found in the eaves a few years ago and the museum knows nothing more about it. The giant dollhouse, however, was donated about 20 years ago after it’s owner died tragically in a car accident. It’s quite impressive – all done by hand and very, very detailed. It even had lights. 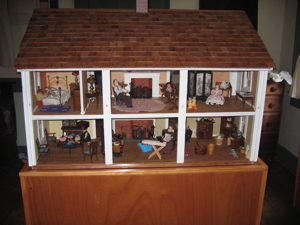 We snaked around into the eaves and here I learned the most fascinating aspect of the house: Back in the day when lots and lots of people lived here, the children slept in the eaves on down mats. I don’t believe insulation had been blown into the walls 200 years ago and central air conditioning was still a ways off. I was just shocked and amazed that human beings could sleep there. (Shocked, amazed, and a bit disbelieving too.) 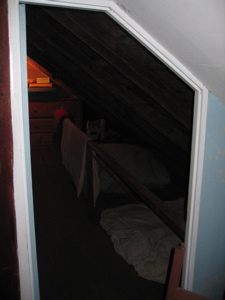 The only thing worse that the sleeping conditions here is the picture quality.

We completed the circle and noted the pieces of wood where an addition was added; there were some old scrawlings as though the wood was used as a ledger at the market when Mr. Porter sold some goods he had farmed, which was pretty neat. Back down the stairs… 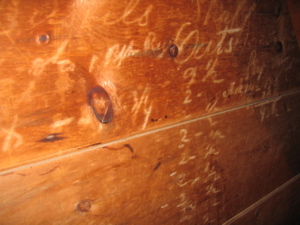 The camera’s flash picked up some writing you couldn’t see with the naked eye. Simka was fascinated by that.

On the way down, my guide began explaining the sad fact that the back half of the house is actually rented out as an apartment to help defray the cost of maintaining the museum. On the one hand, it must be pretty cool to live in such a historic home. On the other, the fact that you’re not allowed to so much as put a piece of tape on the wall must get a bit frustrating at times. We spoke about the state of these old house museums and how not many people are visiting these days. She said something about the Internet and a waning general interest in history. This all really bummed me out, but at least I can feel as though I’m doing my part. (The irony is not lost on me regarding the fact that if one were to read this and look at the pictures, one wouldn’t necessarily feel the need to drive to the middle-of-nowhere Coventry to experience it themselves.) 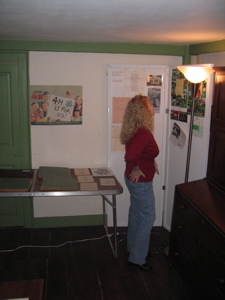 I was a little disheartened by this revelation about the renters, and the whole room full of 4-H paraphenalia didn’t exactly boost my spirits. A 4-H display? What does that have to do with Strong-Porter OR strong porter? (Which reminds me, where is my beer?) I challenged Simka; “What are the 4 H’s?” Put on the spot, she got nervous initially but did come through. I didn’t even look at the 4-H stuff and we moved over the “Grandma’s Kitchen.” 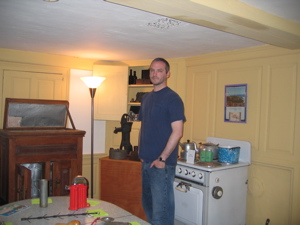 Ah yes, another nice kitchen display from the early 20th-century. A stove, a fridge a table – at least there was a pretty fun game on that table. Even you can play through the magic of CTMQ! 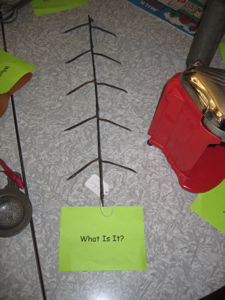 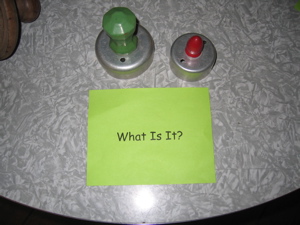 I like corn, and I like donuts… and I like good beer. “Thanks fake-Simka,” I said, “for your time and information (and for taking a few pictures of me). So… where’s the tap? In the basement?” She looked at me with an even more confused look than she had initially upon meeting me. “You know! The strong porter! Where is it? I could really go for some about now.” With that, she simply said goodbye, told me to get out, and pushed me through the door into the warm spring sunshine. 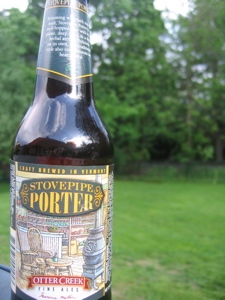 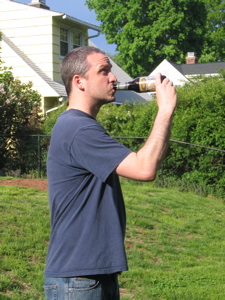 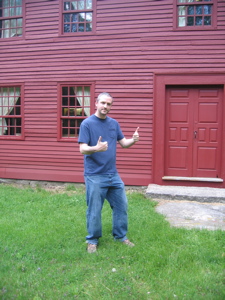