The District of ColumbiaForniaTicut
Alien Siege, 2018

Do I have your attention? Good. Now listen to me closely: that first paragraph was a lie. The movie I’m about to discuss is hands-down one of the worst movies I’ve ever seen. And the dumbest thing about the fact that I watched this (thankfully short) 85-minutes of dreck?

It has nothing in the world to do with Connecticut. No one is from Connecticut, no one mentions Connecticut… literally nothing in this movie is remotely Connecticut-y. So why did I watch it and why am I writing about it? I’ll save that for the end, because for me, it wasn’t until I was about an hour into this mess that I realized I was watching a bad movie for no reason.

The movie was made by The Asylum; an outfit that specializes in low-budge sci-fi, often apocalyptic movies. Sometimes, their efforts are cheesy fun. And other times, you get Alien Siege.

A giant alien spaceship hovers over Washington DC, destroys some important buildings, and the president escapes with his life and a colonel. Meanwhile… cripes, you don’t care.

Cumberland, Maryland is mentioned so we’ll be generous and say that’s where the president’s helicopter escaped to. While Cumberland is hilly, here is what it looks like in this movie:

The whole movie was shot in the dry hills outside of Burbank, CA. One house, a dusty road, a church, a fake gas station, and… that’s about it. After failing to shoot down the alien ship, the aliens transport to “Maryland” and it turns out they have human body forms and happen to shoot guns, just like humans.

They are slow, plodding, and have terrible aim – despite their technologically superiors selves. They are aiming to reclaim some piece of technology to “rule the universe through destruction” that the colonel carries in a briefcase with her.

Oh yeah, some kids have joined the president now and their black friend was the first person killed in the movie.

One of the kids’ parents drives a car with a California plate: 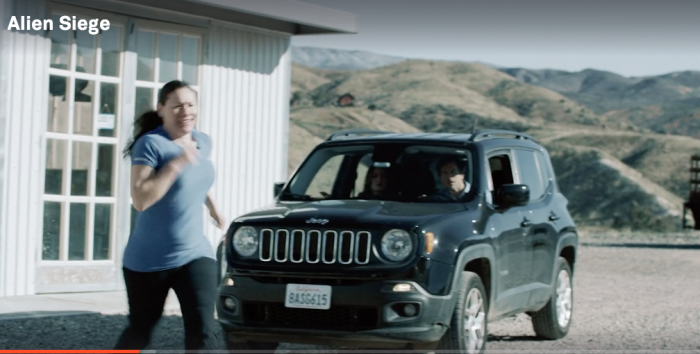 Until someone noticed it and decided to put white gaffer’s tape on it, even obscuring a digit for some reason: 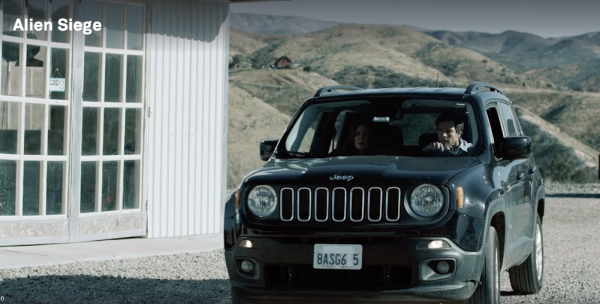 There are tons more continuity problems. Make up changes, blood stains disappear and reappear, one woman’s hair is green now and then it isn’t…

The family and the president and the colonel run around in circles avoiding the dopey aliens and manage to kill a few. One with a pitchfork, and many with firecrackers, bottlerockets, and roman candles. Turns out that their armor reacts violently with potassium nitrate and that kills them. It’s just so dumb.

They all run around the same square mile some more, find a magical scepter that transports aliens from the ship to the ground – oh, it’s The 4th of July and this family is totally into it:

They even have a spread of food out, in anticipation of the big day. And boy, do they love raw broccoli and what appears to be either a raw leek or perhaps a whole thing of celery: 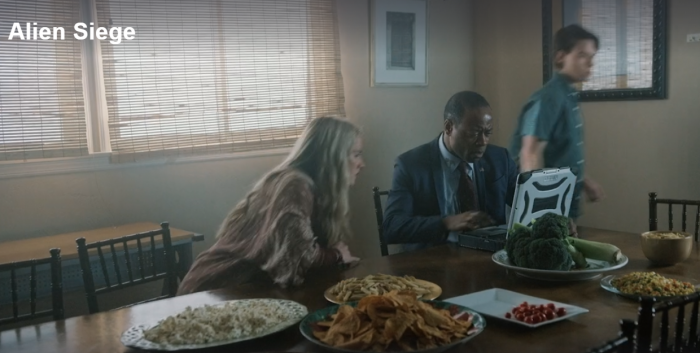 That’s the president, by the way. They decide to go to “The Asset” which is a captured friendly alien engineer who helped develop the device that his bros have come to take back. Here is what he looks like:

He is of no help and serves literally no purpose at all in this movie. They run around in circles some more, kill some more aliens – aliens who look like this in armor:

The dad finds the scepter ball and tells his son to “go long” for some inane reason, and proceeds to throw it 6 feet to him in a way that shows me that this guy doesn’t know how to throw a football:

His kid attempts to catch it and – I’m not kidding – in the edit that remained in the film, the glass thing broke. It’s tough to see here by his forehead, but I swear it’s true:

They screw the bulb into a stick and the kid and his dad transport up to the ship and the boy runs some code and something happens and they they transport back to earth as the ship blows up the end.

So why did I watch this? Because the absolute morons who produced this movie apparently think Washington DC is surrounded by Connecticut rather than Maryland and Virginia. When I was searching for Connecticut movies, Alien Siege was found from this: 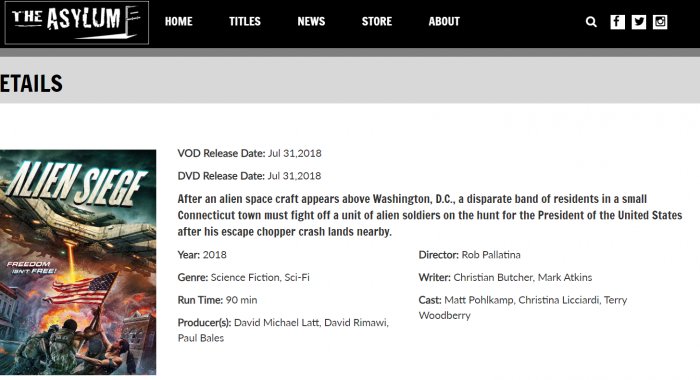 This blurb was picked up on other sites, I found it, the movie was added to my list, and then I found it on a streaming service and here we are.

I get that low-budget B-movies are all bad by any objective measure. Many are “good bad” and many are “funny bad” but it’s the truly crappy ones that are just straight up bad bad with no redeeming qualities.

Alien Siege is bad bad, and The Asylum is worse for not knowing where Connecticut is and therefore making me watch it. A pox upon everyone involved in every part of this movie.

CTMQ Rating: 1 out of 5 thumbs up
Connecticutness: 0 out of 169 Nutmegs
Filmed in Connecticut? Goodness no
Wealthy Caucasian with a Big House? Yes 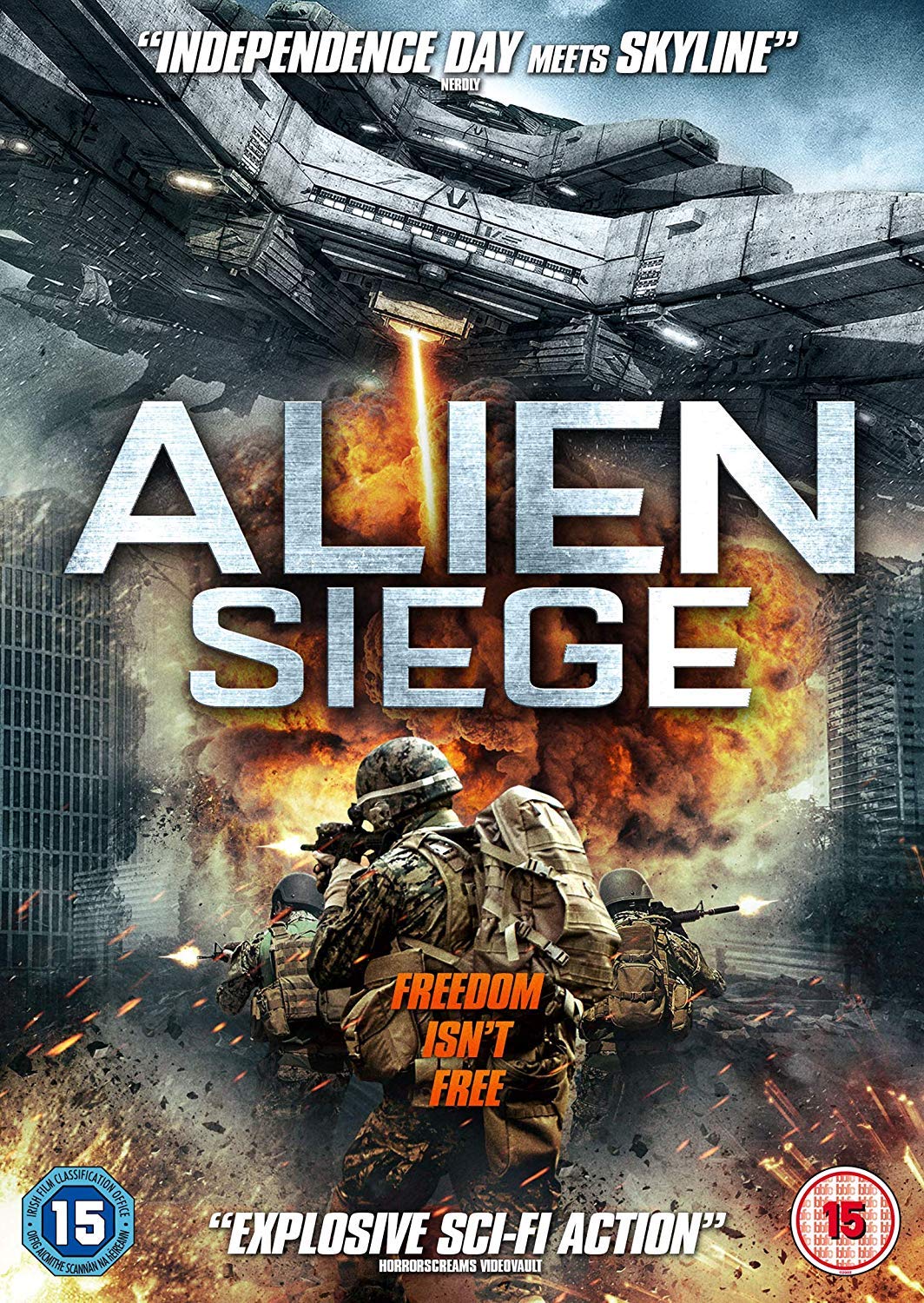