I’ve waited a decade to write this page. And I should probably wait at least a decade more. But here we are… on a page about a tiny strip of sand along the shore of The Congamond Lakes’ Middle Pond. 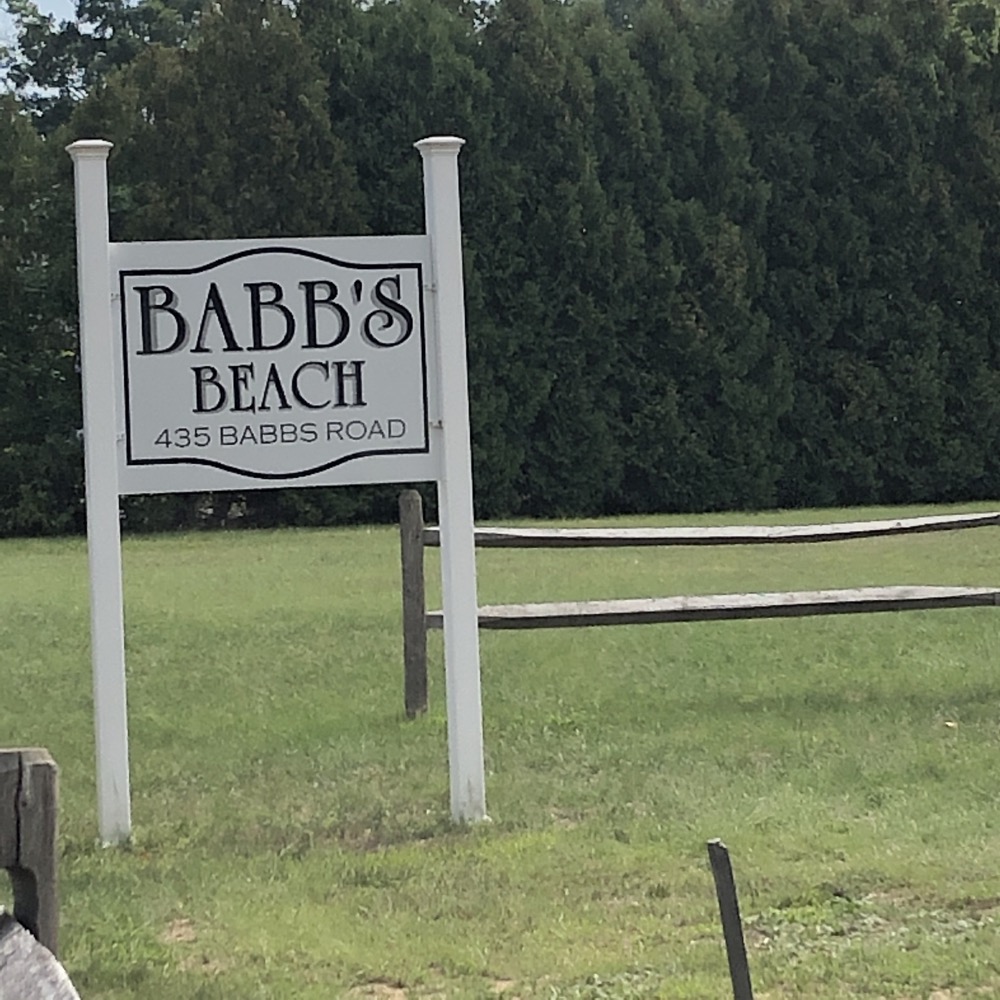 For Babb’s Beach was once an entertainment hotbed and there are hopes and dreams of it becoming so once again in the future. Now, you’re probably thinking I’m going to spend half this page ginning up the “Take Back the Notch” rallying cry, but I’m not.

It must be mentioned though. Babb’s Beach is in Suffield. the lake directly west is Massachusetts. This, my friends, is deep in Notch Territory; a territory that should be Connecticut. (But seriously, Take Back the Notch! The whole sordid tale is here.)

Until such time when Connecticut is made whole, we’ll focus this page on Suffield’s town beach. Actually, I don’t care about the beach itself at all. I care far more about the building halfway between the parking lot and the beach, but we’ll get to that in a minute. For this place has history! 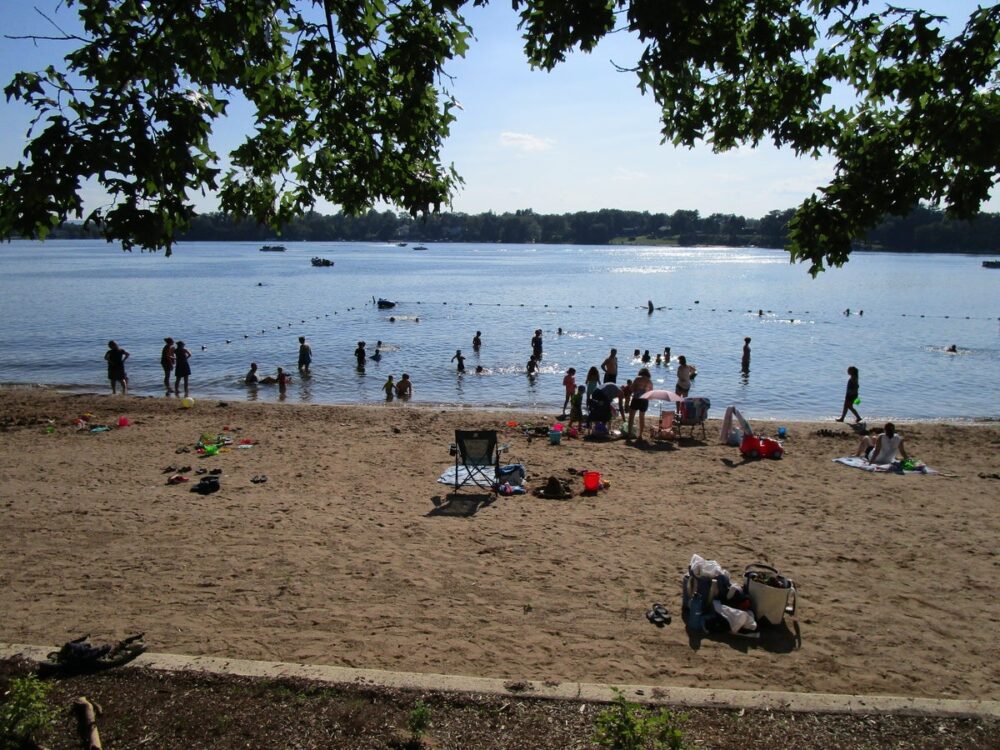 The Congamond Lakes began to develop as a leisure and recreational destination beginning in the 1850s, following the construction of the New Haven and Northampton Railroad along the former route of the Farmington Canal, which had used the lakes as part of its route. Curtis Babb capitalized on the increasing popularity of the lakes as a destination by building a series of small cabins on the lakefront, and offering steamship service to the train on the far shore. Babb’s son Nelson took over the property in the 1910s, and expanded its facilities. He converted a horse barn into a dance hall, and also built a bathhouse and boathouse on the waterfront. Facing competition from other lakefront amusement operators, he also offered a variety of rides, including a merry-go-round that was built on a platform in the lake. The dance hall proved a major draw, and was eventually replaced by a larger structure. 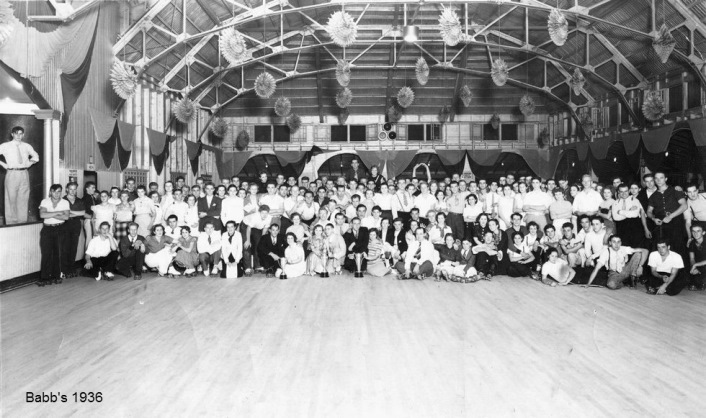 The current roller skating rink was built circa 1930 as a dance hall and hosted well-known musicians during the Big Band era. Performers at the venue included Tommy Dorsey, Harry James, and Kay Kaiser. Things began to decline after the Great Depression and then really fell apart after WWII. Hurricane Diane in 1955 dealt a nearly fatal blow, but the roller skating rink soldiered on. In 1977, the family donated the approximately 7 acre property to the Town of Suffield. Nelson Babb had a life-use and continued to operate the skating rink until 1996.

For the next decade, the whole place fell into disrepair, but a grassroots effort to save it began and in 2016, the Town made extensive improvements and officially reopened the park and beach to the public in 2017.

Not all that exciting, I know. Neither is the $20 fee for each carload that accesses the beach. I’m really just interested in that skating rink building and if they ever get it going again. In 2003, the town and interested parties began the process of restoring the 11,000(!) sq. foot building, but… nothing really happened. 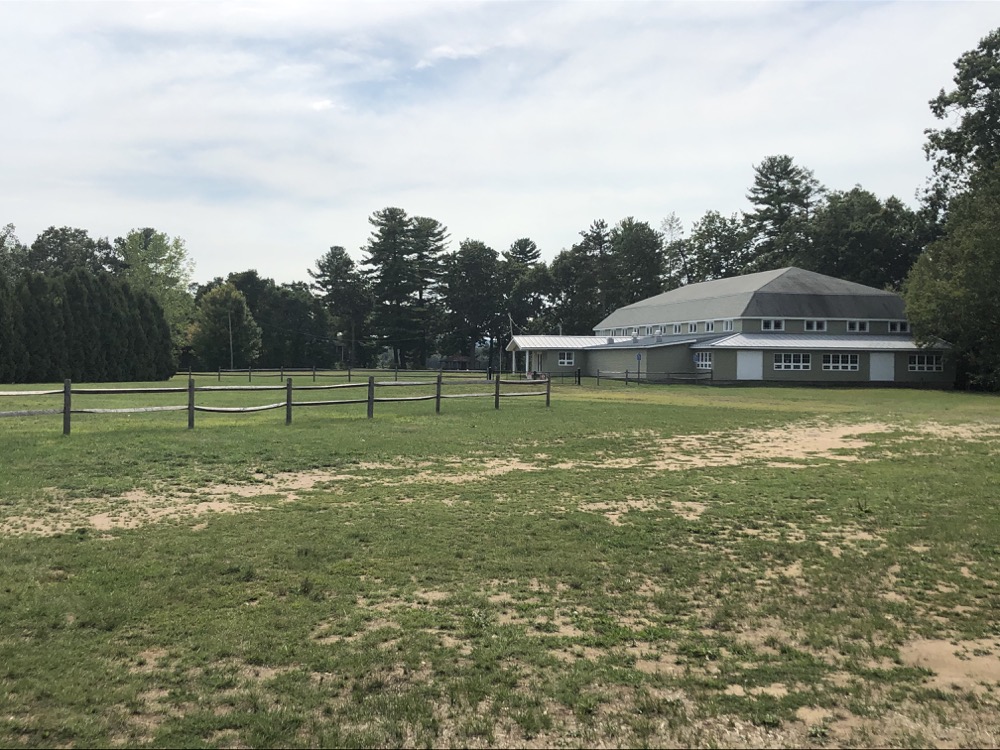 At its height in the 1930s, the surviving dance hall hosted dances for up to 3,000 weekend patrons. It looks fine from the outside, but I haven’t seen any updated photos on any work being done inside of it. I just can’t wrap my head around the idea that there’s a significant effort to reopen a huge space for… roller skating in the 2020’s.

But at the same time, I love that there’s a significant effort to reopen a huge space for roller skating in the 2020’s. And not just because historically, that’s what was here. No, it’s just such a goofy outlier of a push that I’m all for it.

Heck, maybe I’ll even learn to roller skate if it ever opens.