I finally did something on an impossibly hot day that everyone in the Hartford area should do at least once: Took the History Tour of Elizabeth Park. You’ve all been there. You’ve toured the rose garden and walked around the ponds. You’ve danced at one of the free concerts or had a picnic. And you may even have heard that this place is pretty important in the history of public parks in the US. I really enjoyed the tour and learned a lot of cool stuff. 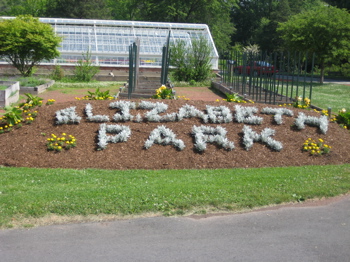 Of course, it’s now many months later as I write this so I’ve forgotten more than I’ve retained, but here’s a fun fact to whet your appetite: You know the Pond House Café? Disregarding the absurd ten year battle to get it up and running and serving wine, check this out. It’s a lovely restaurant next to the pond and that’s why it’s called the Pond Café. Duh, everyone knows that.

And everyone is wrong. 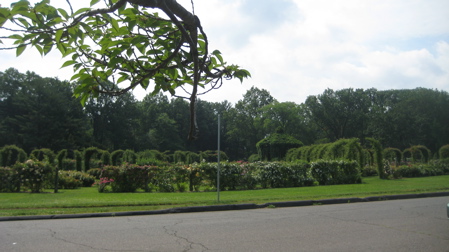 The area which is now known as Elizabeth Park was once owned by Charles M. Pond. Mr. Pond was a wealthy industrialist and statesman whose career included being a Director of the New York, New Haven & Hartford Railroad, Hartford Hospital, and the Phoenix Fire Insurance Company. Mr. Pond was also President of the Hartford Trust Company and he was Treasurer of the State of Connecticut.

When Mr. Pond passed away, he willed his estate to the City of Hartford with the stipulations that it be used as a horticultural park and that it be named for his wife, Elizabeth, who had died a few years earlier. The city took possession in 1897 and engaged the famed Olmsted and Son firm for landscaping. (While ol’ Frederick Law had nothing to do with the park’s design, his influence is certainly seen around the grounds.) 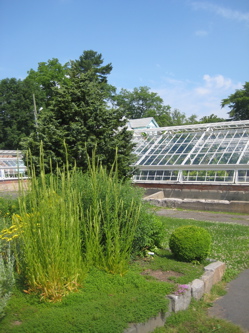 You can also tell your crew how you spent an hour or two with a whole bunch of old women. (Note, if you’re an old woman, this fact won’t be as exciting to your friends.) Because, as you’d probably have guessed, that’s who mostly joined me for my history tour. Not only did I stick out like a sore green thumb because I was under sixty, male, and over 5 and a half feet tall, but also because I asked the most questions and, of course, took the most pictures. I’m used to being the curiosity though by now. 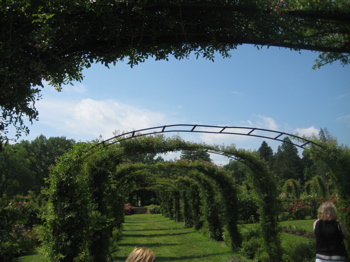 If that Pond fact didn’t stir your blood, how about this one: The world famous rose garden is the oldest municipally operated rose garden in the country. Sure, that’s a rather caveated fact, but it’s a Connecticut first regardless. It is a two and a half acre garden which has about 800 varieties of roses that amount to 15,000 plants.

The City hired Theodore Wirth as its first park superintendent to design the garden areas. Mr. Wirth’s first project was to create a rose garden because, in his words, “it would please the people.” This first planting grew from 100 bushes to the massive rose garden that is now the centerpiece of Elizabeth Park. 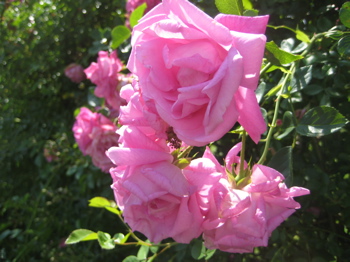 What of this Theodore Wirth? He was a pretty impressive guy. Wirth (1863–1949) was Swiss-born and is widely regarded as the dean of the local parks movement in America. The various titles he was given included administrator of parks, horticulturalist, and park planner. Before emigrating to America in 1888, he worked as a florist and landscaper in Zurich, London, and Paris. He married Leonie Mense, the daughter of his employer in Glen Cove, Long Island, before taking a job as superintendent of parks in Hartford, Connecticut in 1896, where he – as we now know – developed the first municipal rose garden in the country. He moved on to design basically everything outdoors in Minneapolis.

Today the park encompasses 102 acres and boasts many garden areas, pathways, greenhouses, lawns, a picnic grove, a pond and recreation areas. Our group gathered at the main house in the center of the park and melted for a few minutes while our guide gave us the overview of the park’s history. She was an excellent guide and no one complained about the heat at all. (Until me, now, I suppose.) 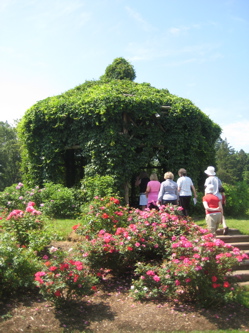 The history tour takes in the main gardens in the park and doesn’t venture too far away from the superintendent buildings. I think this is more than fine, as all the history is contained in that area anyway. I should note that Elizabeth Park is much bigger than most people think, as it pushes west pretty far into West Hartford and then actually east a bit across Prospect Avenue to the most overlooked overlook in the state, Sunrise Overlook, which takes in a very nice view of Hartford.

Up first, we (of course) hit the rose garden. 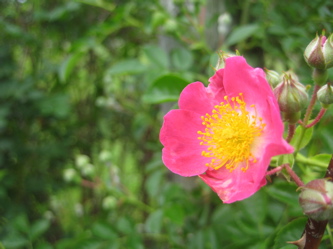 Rambling roses cover arched walkways in the garden and the beds are filled with roses of every shape and color. Along the border, fences of climbing and shrub roses provide a colorful background for the bedding plants. The rose garden is one of only 22 public All America Test Gardens in the country. This test program evaluates new roses before they are introduced to the general public.

While the main rose garden shows off the more modern roses, the Heritage Rose Garden is the home to more historical varieties. A number of unusual and interesting roses are found here. During its peak bloom time of early to mid June, it is the most fragrant place to be in the park.

Putting it mildly, there are a buttload of roses here. I wasn’t visiting during peak bloom time, but we’ve seen it on many occasions. Even though Norwich is called the Rose City (v.Connecticut), one can’t argue that Elizabeth Park is quite rosey for a few weeks every summer. The arching arbors are a really cool touch here and the layout affords lazy strolls with no particular destination in mind. 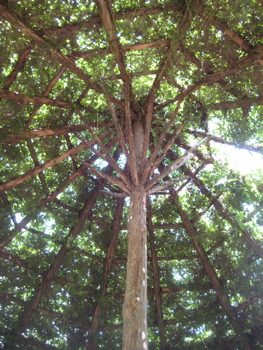 We all sat down in the natural gazebo and learned that the main tree holding up the thing had recently been replaced, but the old one was the original one from, I forget, but something like 100 years ago! While resting in the shade, our guide told us the crazy story about how the geniuses in Hartford almost made a colossal mistake.

In the 1970’s the city decided it could no longer afford the garden, and in fact determined to plow it under; however in 1977 volunteers banded together with Vic Jarm (Park Superintendent at the time) to form the Friends of Elizabeth Park and save the Rose Garden. Their first mission was to raise $10,000 to replace many of the rose bushes that died from lack of care. Since then the Friends of Elizabeth Park have assisted the City of Hartford in maintaining the Rose Garden as well as the other horticultural gardens in the park and have raised funds for the restoration of the historic greenhouses and the Elizabeth Pond Memorial in 1997 (now known as the Pond House Cafe). Most of the financial support for the park through the efforts of the Friends comes from individuals, the Ethel Donaghue Trust, and the Hartford Foundation for Public Giving. 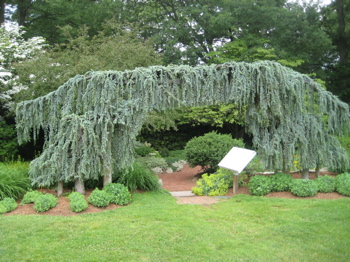 The Ethel Dona-who? She’s the third player in how Elizabeth Park came to be what it is today. Ethel F. Donaghue was a resident of West Hartford for nearly 60 years, living just a short distance from the park. In addition to creating the Patrick and Catherine Weldon Donaghue Medical Research Foundation, her Will established a much smaller trust in her own name to conduct capital improvement projects in the park she lived near and loved so much. Beginning in 1991, the trust has already spent several hundreds of thousands in park improvements, including a major tree pruning and maintenance effort, and the building of the Sunrise Overlook on the east side of the park. 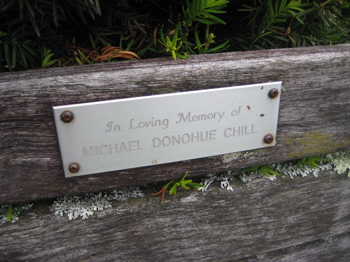 A nice bench to chill on

It has contributed to the improvements to the Pond House, restoration of the two green houses and the historic orchid green house and paid for the granite curbing and crosswalks in the expanded parking area near the Asylum Avenue entrance. The Trust has also paid for numerous other smaller efforts over the years.

Hats off to Ms. Donaghue. But let’s give at least a tip o’the hat to Michael Donahue Chill, who sponsored a bench in the park on which to, ahem, chill.

Let’s go see a bit more of the wonderful gardens that were almost destroyed by the stupid city of Hartford. 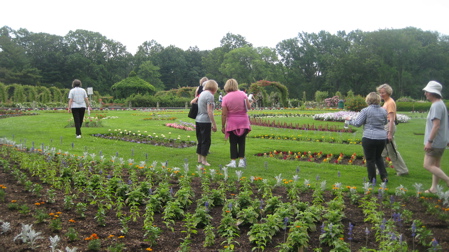 We first checked out the Shade Garden, with its impressive yew stretching across the entry arch. This was followed by the The Rock Garden, which “provides a quiet getaway for peaceful contemplation. Its springtime bloom is breathtaking and all season long its subtle changes provide a backdrop for rest and relaxation. Next to the rock garden is a wonderful collection of ornamental grasses which provide an interesting view all year long,” so sayeth the park’s website. 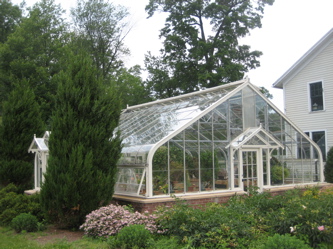 This is actually my favorite section of the park and it also provides a slick cut-through to West Hartford suburbia. It’s a good parking spot for crowded events. Here’s some more stuff about the various other gardens from their site:

Color is evident in the gardens throughout the season. Starting in early spring the tulip display provides show stopping color and fragrance in the Annuals Garden area. Once they have gone by, the bulbs are removed and are replaced with the annuals that were started in the greenhouse. They will provide color and texture to the garden until frost. The Herb Garden is maintained by The Connecticut Unit of the Herb Society of America. This classic design holds a multitude of varieties that show the range of herb plants. The Perennial Garden was designed by Frederick MacGourty. His design utilizes cool and warm zones of color that move throughout the garden as the season progresses. The gazebo in the center of the garden affords a shady spot to enjoy the surrounding beauty. 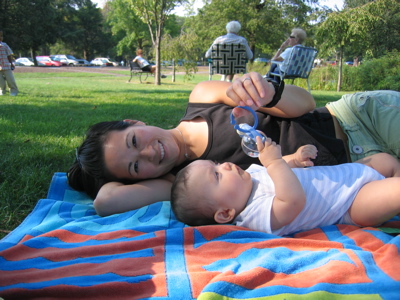 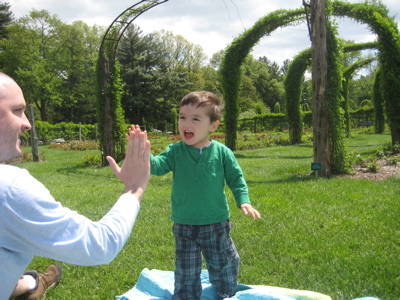 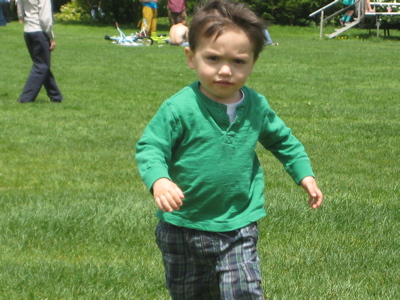 Our last stop was at the greenhouses. These things aren’t your typical run-of-the-mill structures. The greenhouses are 100 year old Lord and Burnham structures. Lord and Burnham are THE premier greenhouse/solarium makers in the world. They’ve done it all over the last 130 years or so. The facility is used to grow annuals and other plants that are planted in the park’s gardens and in plantings that are located throughout the city. The City of Hartford is no-longer able to keep the greenhouses open for the public except for 2 weeks during the spring flower show in March. 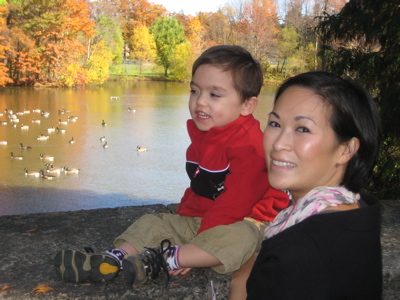 The wonderfulness of Elizabeth Park lies in your ability to run around over the great grass expanses around the gardens. While I can’t quite call it an oasis in Hartford, as it straddles (and spills over) the West Hartford line, it sure is a nice, often under-appreciated area in central Connecticut. Of all the random tours you can participate in around the state, I’d put this one up pretty high on the list. It’s a great urban park; as nice as any around. 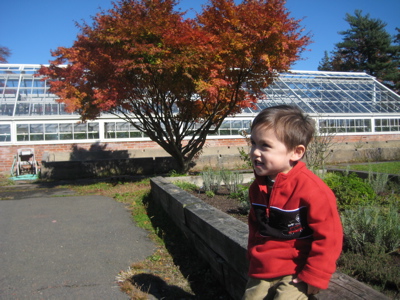 Late October 2009, by the Dahlia gardens and greenhouses