These falls (cascades, officially) are included in the 2013 Connecticut Waterfalls guidebook, so I’m adding this page six years after visiting. And since I’m lazy, I’m not going to go find the CD that contains the original pictures to give you the lovely giant waterfall picture you so richly deserve. Since I didn’t know this cascade would make a guidebook in the future, I didn’t spend any time taking proper pictures, so this is all I’ve got. And that’s a shame because these are nice falls. 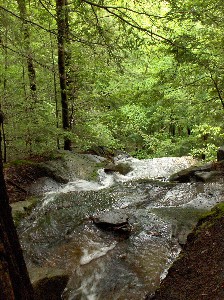 People disbelieve me when I tell them that one of the highest probability places in Connecticut to see a bear is at Peoples State Forest. I don’t know why they disbelieve, but they do. Granted, the bears here have more tags on them than a thrice-marked down dress at Marshalls, but they are bears roaming the wild nonetheless.

That has nothing to do with this page, but thought you’d like to know. And I can’t abide by my terrible picture, so here’s a better one. 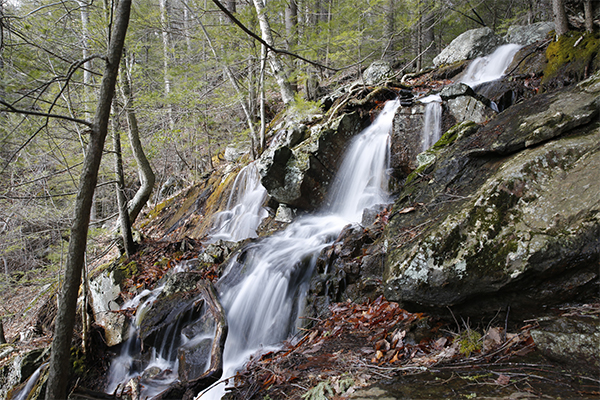 Peoples is a beautiful spot. The drive to it alone, especially from the north, is worth the effort alone. Do it in October and you’ll thank me later. There is a large 11 mile network of trails at Peoples, so you have a few options to get to these cascades. The simplest and most straightforward is to park along East River Road at the red and blue blazed Falls Cut-Off Trail trailhead and ascend the nearly 300 stone steps straight up the hillside along the falls. 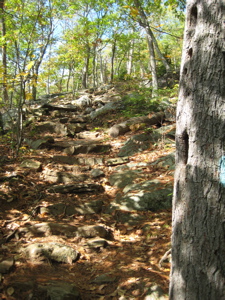 This is a very steep climb, I’m telling you now. I was six years younger than I am today as I write this and I still remember it wearing me out. It’s only .2 miles, but unrelenting.

Another approach is via the Jessie Gerard Trail. If you spend some time on that trail, above the cascades (and you certainly should), you’ll be rewarded with some phenomenal views of the reservoir valley below. The Jessie Gerard Trail is named for Mrs. Franklin W. Gerard who, along with Alain White, pretty much got the state forest program off the ground in the early 20th century. “Her” trail is a lovely relatively flat hike through hemlock and pine and with the viewpoints I just mentioned.

Of course, if you come that way, you hike down the Falls Cut-Off Trail to the falls which means you then have to go back up… but your “up” is less than the other option.

You’ll also venture near the Barkhamsted Lighthouse site. What’s that? Read about it here. 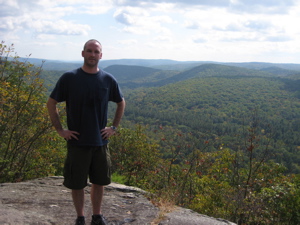 A view above the falls on the Jessie Gerard Trail