I have no idea why we started hiking the trails of Avon in early 2016, but we did.  I used the hikes as sort of a filler on those weekends when we didn’t have time to do a “real” hike or to go on another adventure.  “We only have a couple hours? Fine, lets go over the mountain and do a little hike.” 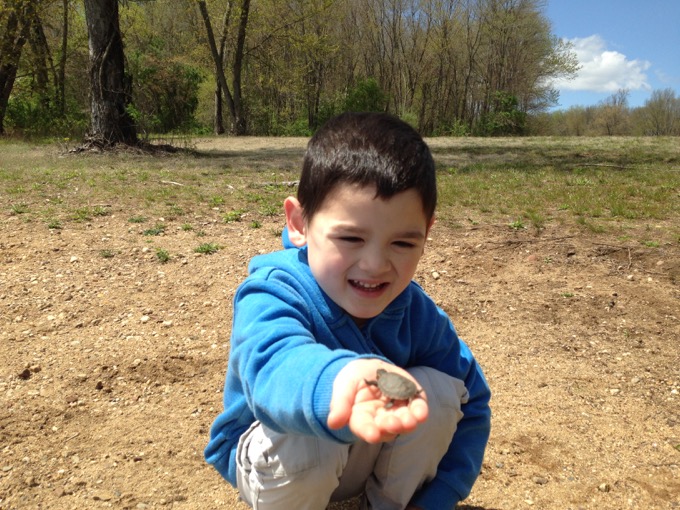 And once we got going (of course by “we” I mean just me here, as the boys don’t know what’s going on in my OCD hike-list-completer head) we couldn’t stop.

I’ve been aware of the Fisher Meadows property for many years, but I’d never explored it. I did Fisher Farm just south of Fisher Meadow across Old Farms Road many years ago.  (Though it looks like it may have new trails now, so a revisit may be in order.)  And just prior to taking my boys to Fisher Meadows, I did a solo hike across the Farmington River at Alsop Meadows. 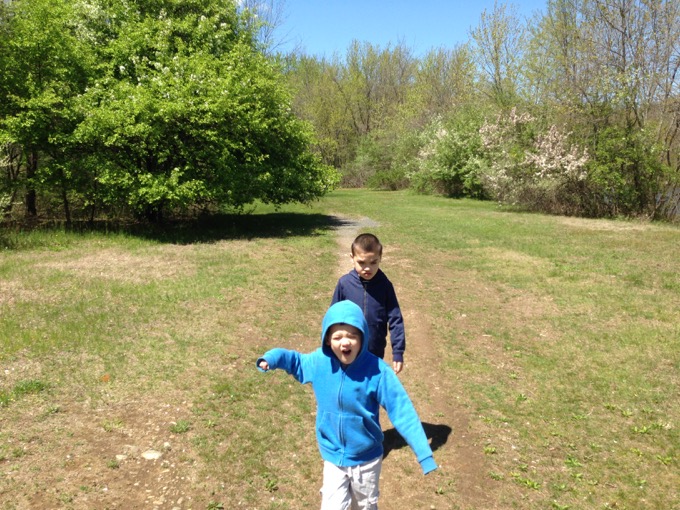 Anyone who has driven Old Farms Road knows that Fisher Meadows has a whole bunch of well-maintained sports fields. That’s pretty much all I ever thought were on the property myself, until I started really looking at the town of Avon’s trailed areas. Surprisingly, to me, there are several miles of trails here – with plans to extend them all the way up to route 44 someday.  They’re only a mile or so short of that goal right now in 2016. 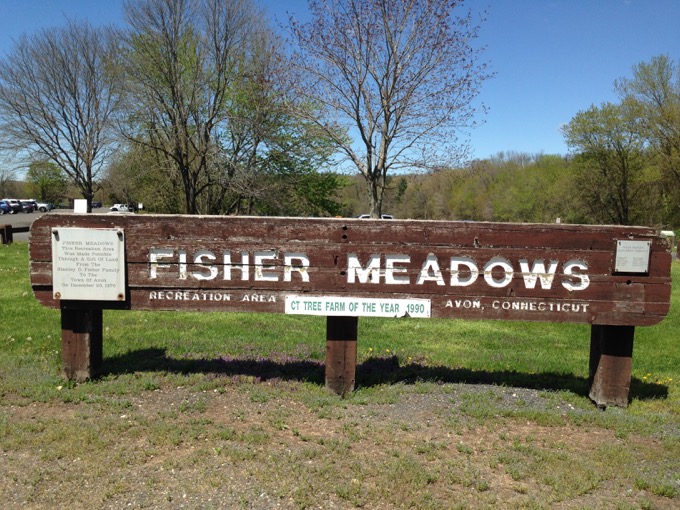 We arrived in the hiker’s lot and stared up at the black clouds above.  It was one of those fun spring days with warm sunshine punctuated by drenching cloudbursts.  A risky day out with my two scamps.

Once the surprise shower had passed, we took our first look at the lake we’d be circumnavigating for the next hour or two.  After Damian stepped in a pile of dog poop, we washed off his shoe as best as possible next to a dead fish.

Are you paying attention now? 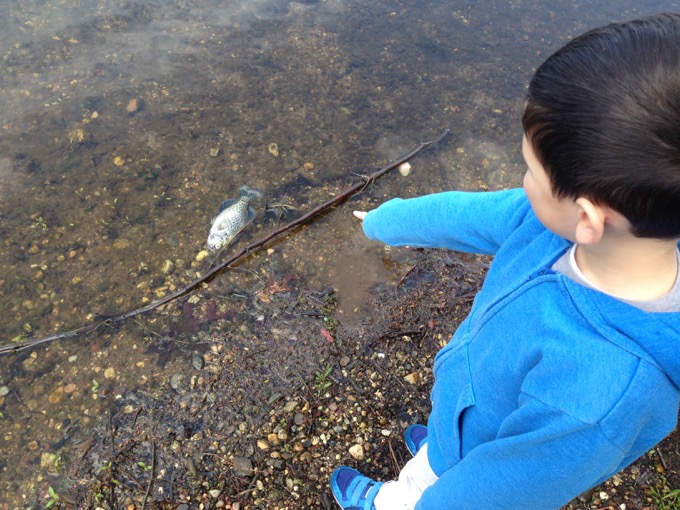 The combination of his brother’s doody-shoes and the hollow piscine stare from the gently lapping water was just too much for young Calvin. This confluence of impossibly glorious events resulted in a flood of kid-questions: “Will Damian be stinky all day? Do we have to flush his shoes down the toilet? Why was their poop there? Did the poop make the fish dead? Why is the fish dead? What made the fish die? Why are its eyes open? If poop gets on my hands, will I get sick and then die?  What happens when you die?  Are you and mama going to die?  I don’t want to die.”

Another thing happened with the Great PoopShoe Fiasco of 2016: I sort of gave Damian the business because I had told him not to step in it 5 seconds before he did. But Calvin, sticking up for his brother, told me that it was an accident. 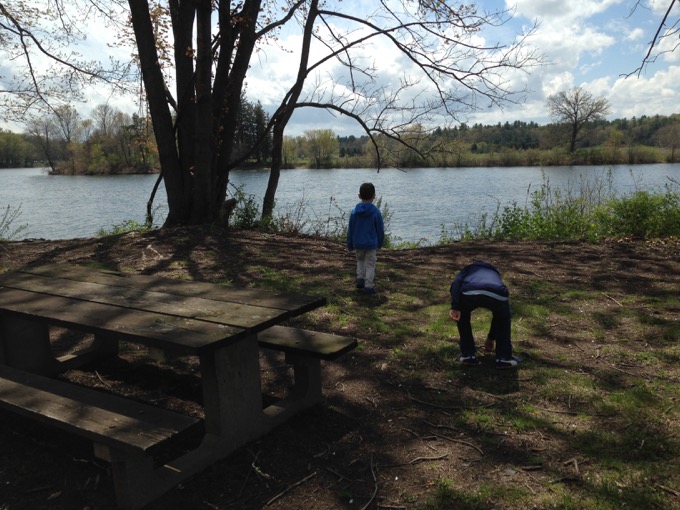 It was so sweet. Damian is not the easiest brother in the world, and yet, Calvin loves him and has begun defending him more and more – in spite of being the brunt of Damian’s unpredictable behaviors every day.  Calvin is an amazing kid.

And we can all learn from him.  Damian went through his self-injury behaviors that he often must get out of his system at the start of many of our hikes. 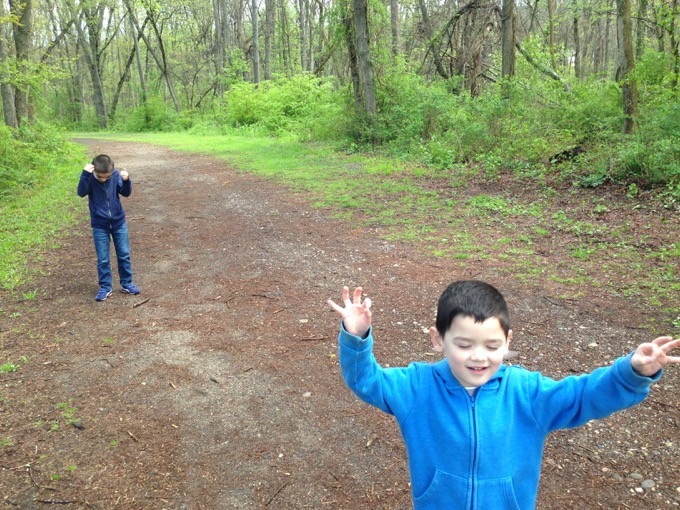 Here he is, punching himself and yelling.  And here’s Calvin, practicing his meditative calming technique.  I love this boy.

Damian continued for a spell, but once we got to the first “You can throw rocks in the pond now” point, he was fine.  I let them toss rocks and sticks for a while, hoping they’ll get bored of such things at some point.

It’s yet to happen.

We moved on and reached a nice little picnicking area where they insisted on throwing more stuff. 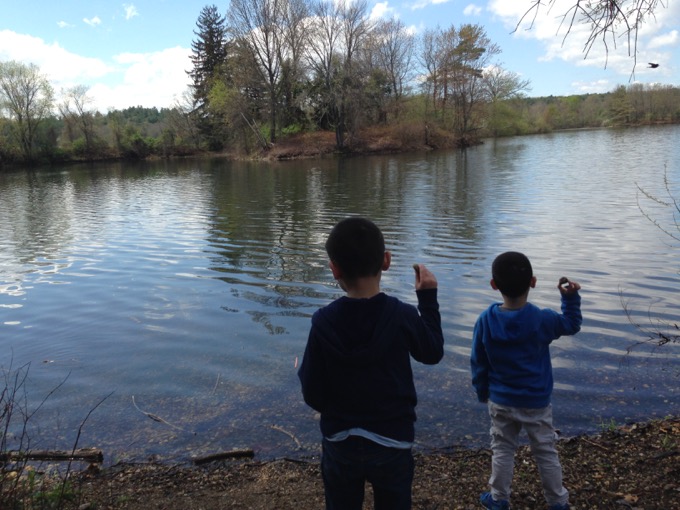 As we neared the northern end of the lake, I spotted a bunch of turtles sunning themselves on some fallen trees.  It’s at this point I must lament that I only had my iPhone with me and therefore my pictures are, again, terrible.

Especially the ones requiring a zoom lens.  Bummer.

Believe me when I tell you that there were a slew of turtles here.  We alarmed them so my pictures captured only one or two.  Calvin was quite happy to have been able to get close to them and watch them plop-plop-plop into the drink. 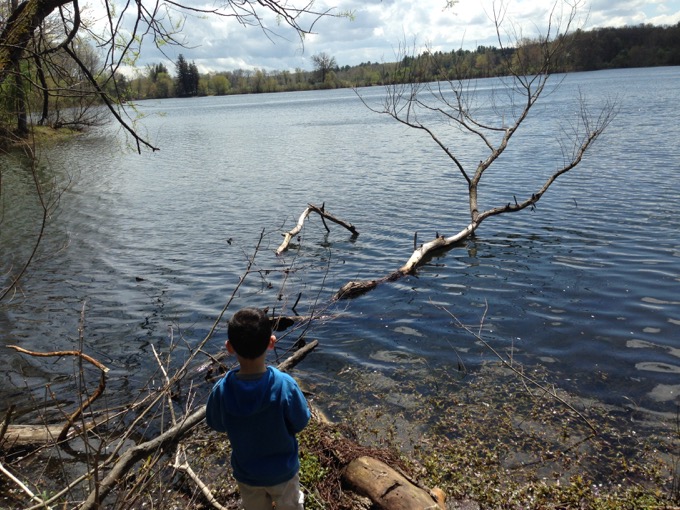 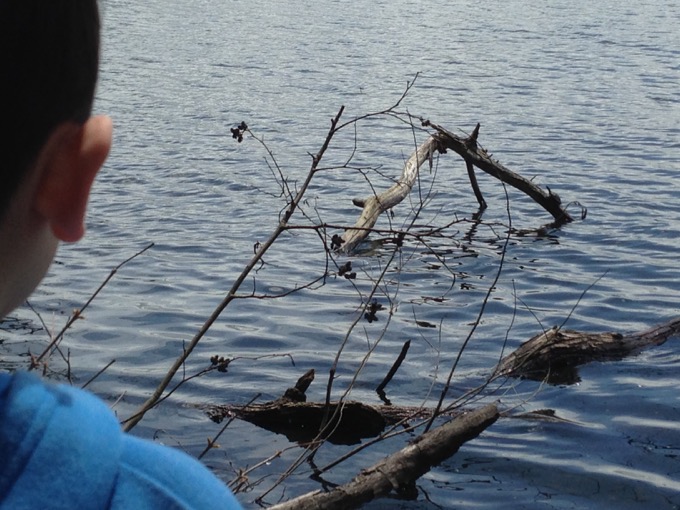 Since we were all new to Fisher Meadow, I had no idea what the building up ahead was all about. Nor did I know that Avon goes above and beyond with explanatory signage and such.  I especially like that these signs are in the middle of the property for the most part; like, you have to actually spend a little energy in order to read them.

And we all know that people LOVE reading verbose signs regarding pump houses, wells, and aquifers. 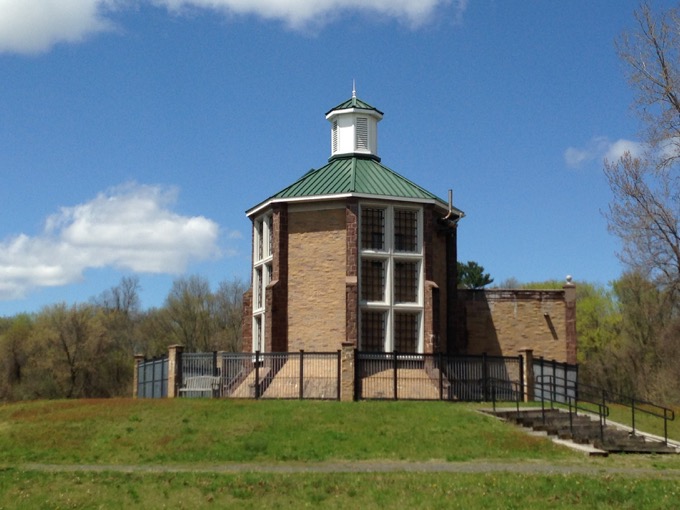 In all its glory, Avon’s Fisher Well #9 Pump House!

Yes, this handsome little octagonal building is essentially a well. An official Town of Avon well. Why the heck does it look like a lighthouse?

Oh, you better believe that I read the signs. Connecticut wouldn’t let them build the pump house in the 500-year floodplain.  So they built a two-story pump house, housing all the electrical and mechanical equipment on the second floor.

(There is a LOT more to read about such fascinating things, but Calvin was  yelling for me across the lawn – “Papa! Papa!  Come here!”)

Oh my!  He had found a baby painted turtle!  Even Damian was kind of interested in Calvin’s find.  Pretty rad, I must say. But back to the truly cool thing here… 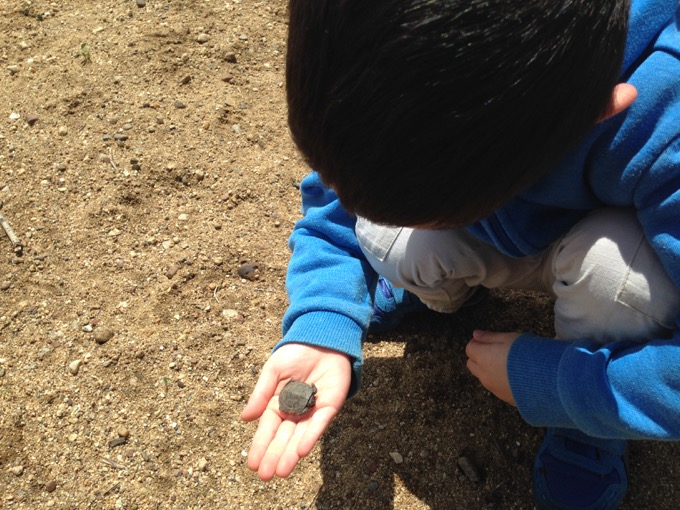 The well house is sort of in the center of Fisher Meadow. Which leads me to the main point here: This place is pretty darn big. It sort of surprised me to be honest with you. On this day, we were merely walking around the lake, but there are a bunch of other trails along the Farmington in the southern half of the property. (We visited the northern half later, as you’ll read below.)

We saw a family of geese, and while we all surely hate geese, it’s always cute to see the little goslings swimming in a line. Even I must admit that. 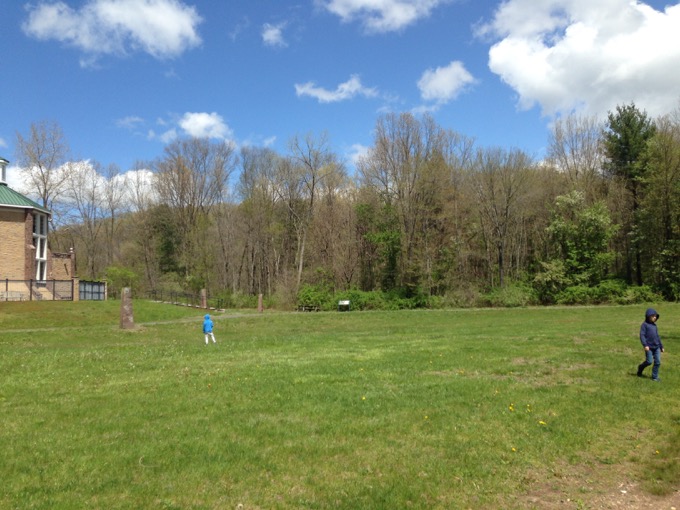 As we made our way back down the western side of the lake, the boys just sort of trudged along asking some good questions about animals and trees. I love that stuff and always try to answer Calvin honestly. (It’s a bit easier when he asks about, say, cankers on trees than about why we die.)

As we approached the ball fields and ultimately, our car, I spotted a Baltimore Oriole in a nearby tree. I was fairly excited, having only seen a few in Connecticut before. I even got Calvin to pretend it was cooler than it was. I then told some passersby, “Hey, look! That’s a Baltimore Oriole right there!” and they just looked at me like I was an ogre. 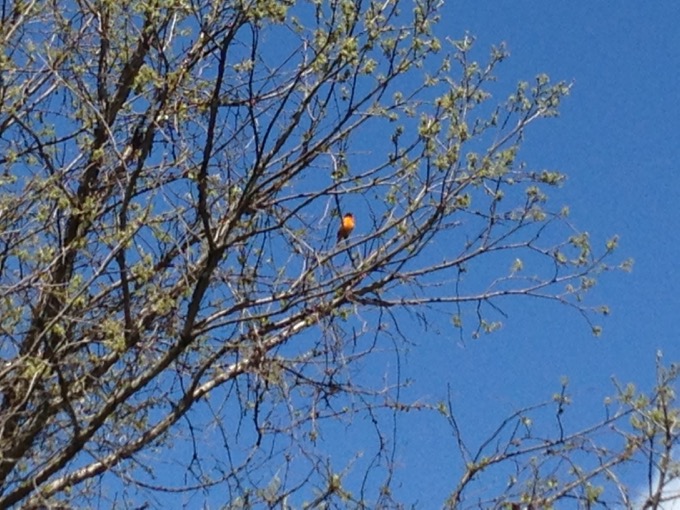 Sigh. While those people can continue looking at their feet while they walk around, I will continue to encourage my boys to look all around them.

Hey, I just learned that the lake here is called Spring Lake. Now we know. 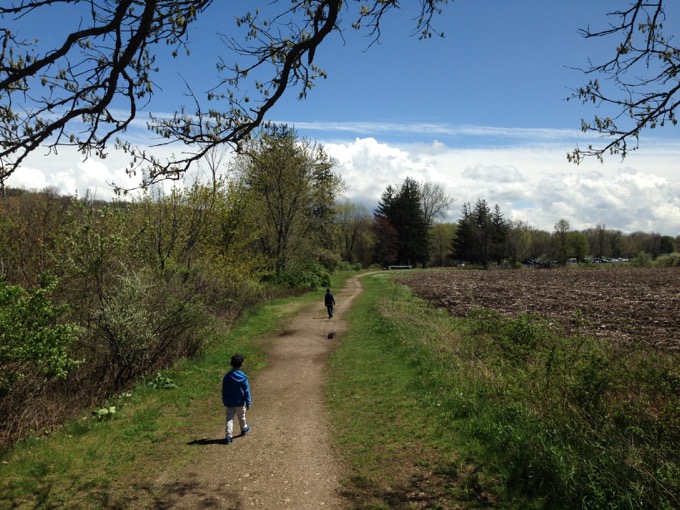 A couple weeks later, we were back out at the northern end of Fisher Meadows. I’ll call it the more secret end, as there are no soccer fields up here. But there were a couple other cars at least; mostly runners enjoying the wide and flat woods road trails I’d guess. 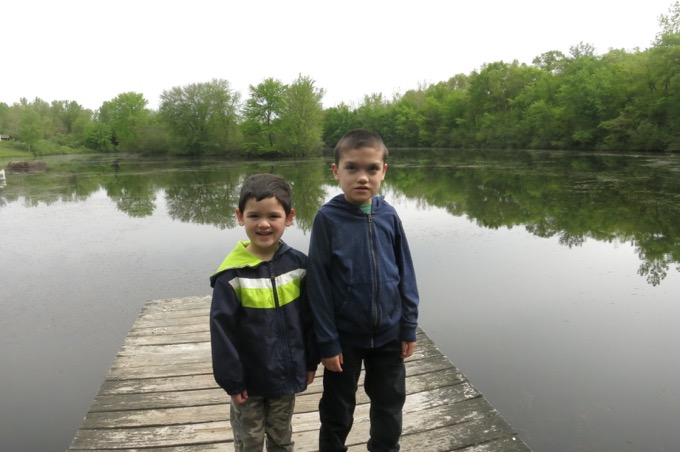 Us? We were going to go for a hike. Not south along the wide roads, but north, into the woods.

Into the Heart of Darkness. 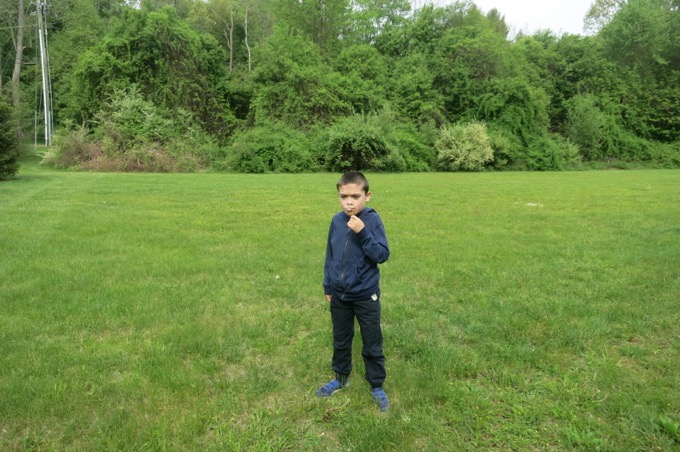 The northern tip of Fisher Meadows is, it appears, a work in progress. The first bit of the hike was fine, up to a little lake. Incidentally, this was the little pond just below the weird private lake with all the water-skiing stuff in it that I noticed during my Aslop Meadows hike.

There was a nice little boardwalk jutting out into the pond as you can see here. 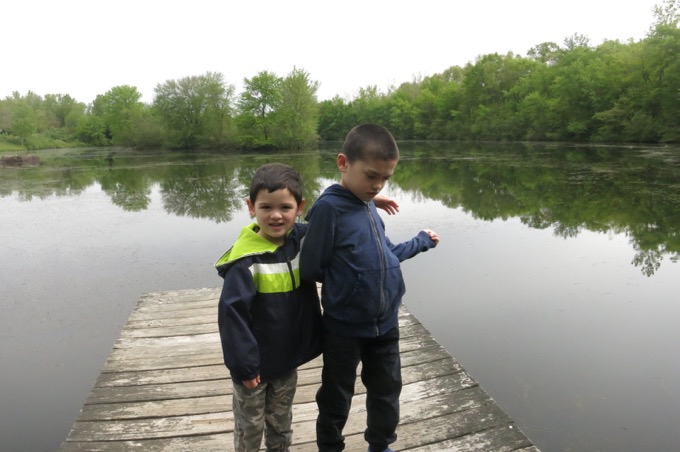 Sometimes, he just doesn’t want to be touched. We love that Calvin keeps trying though.

The trail to this spot was fine, if a little overgrown. Nothing too bad at all. But once we continued aruond this northern look and got to the next bridge, things became… a bit more difficult.

We came to a bridge that was destroyed by a very large oak tree; probably in the last five years or so. This bridge spanned a fairly high chasm and now it was twisted in such a way as to make it nearly impassible.

Adding to the fun was the fact that there was poison ivy everywhere. 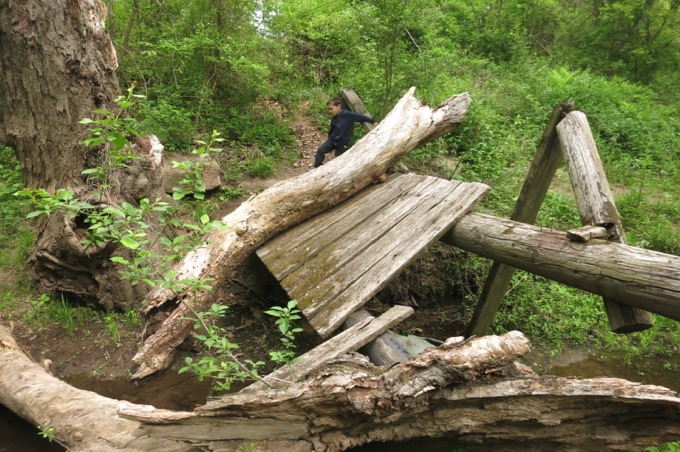 I should have turned around and simply returned to the parking lot. But no, I’m dumb.

I got Calvin across fairly easily, but had to beg him not to move or touch any of the poison ivy around him. But Damian? Hm. I had to have a think.

Damian will NOT walk on anything tilted or jiggly, let alone a sideways bridge with a giant hole in it.

I got him to shuffle with me half way across. He became paralyzed with fear. I had to coax him to allow me to help him move. I hoped for the best, grabbed him with one hand while holding on to the edge with the other and luckily made it across. 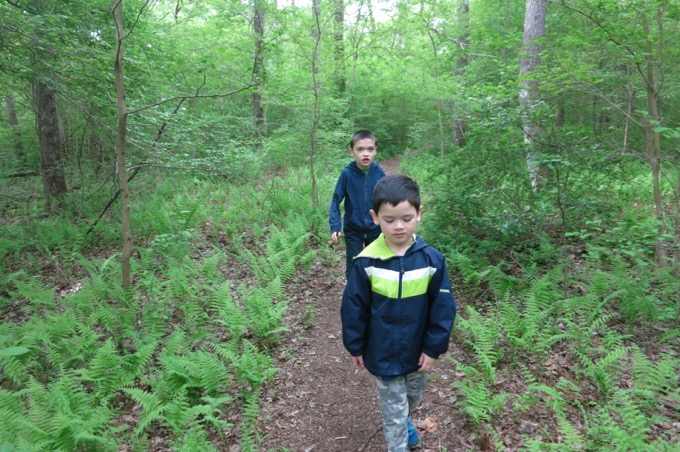 I’m sure this thing will be fixed someday, but in the early summer of 2016, it wasn’t too fun with little kids.

And after the bridge? The trail was nearly overgrown. It’s clear that most people didn’t cross that bridge like we did. But there was no way I was going to turn around due to poor trail to re-cross that bridge! 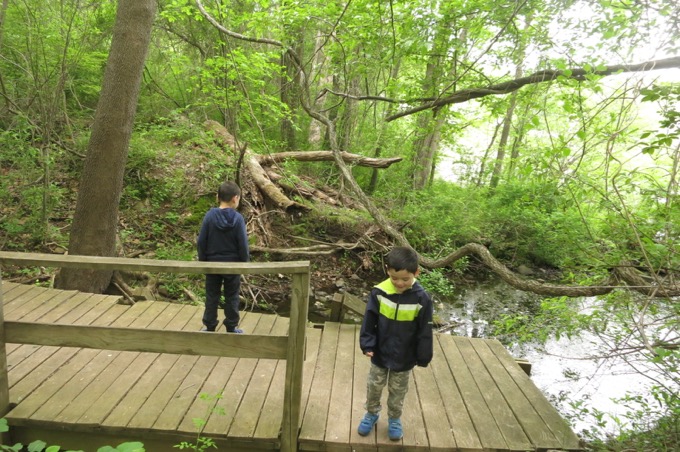 We finally made it out of the woods to the road that 99.9% of everyone else who comes to this section of the property enjoys. (Though, the plan is to extend these trails up to route 44 and if that happens, surely these messy trails will be rectified.) 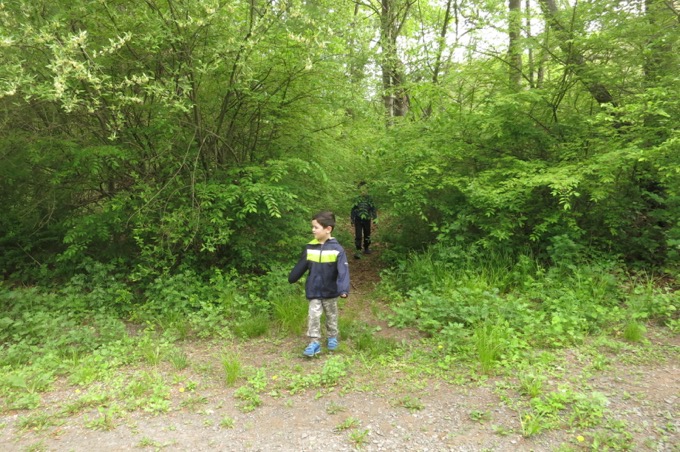 Once on the road – the same road that extends south to that well house we saw early, the boys became a bit bored. There are several interesting signs here, mostly about the defunct Farmington canal that paralleled the Farmington River here back in the day.

We made it southward almost to the wellhouse, but it wasn’t really necessary. I saw it ahead and turned us around to head back to the car. 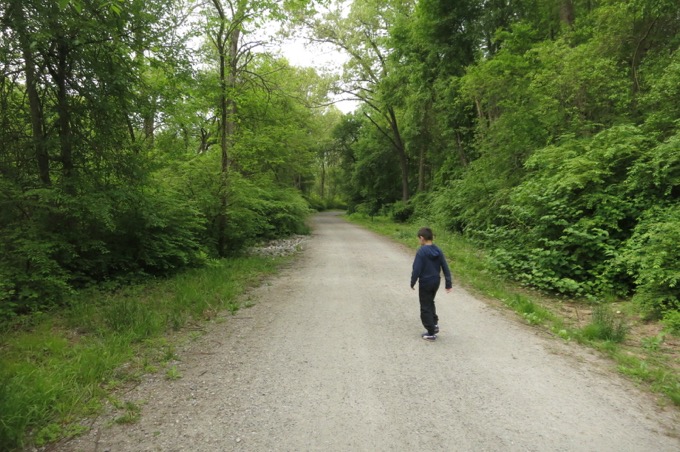 Fisher Meadows is a really cool place. I was pleasantly surprised with all it had to offer. It was devoid of litter and the signage far, far away from the crowds was such a bonus. 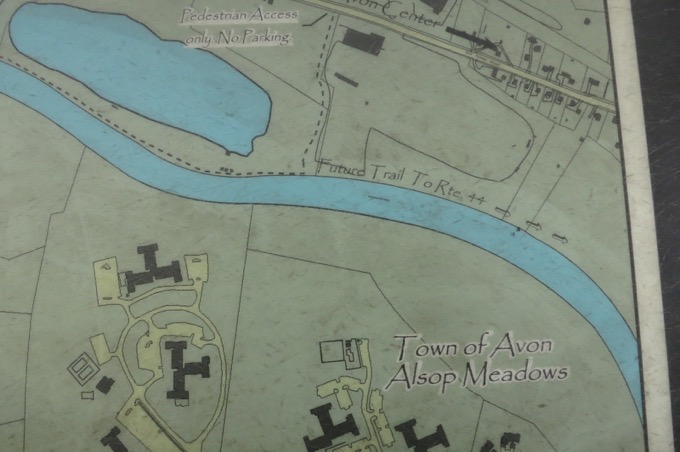 the map of the future