I must admit, “Found Land” is one of my favorite place-names in Connecticut. My hope is that Avon or Canton finds a new plot of unclaimed forest and they can call it “New Found Land.” 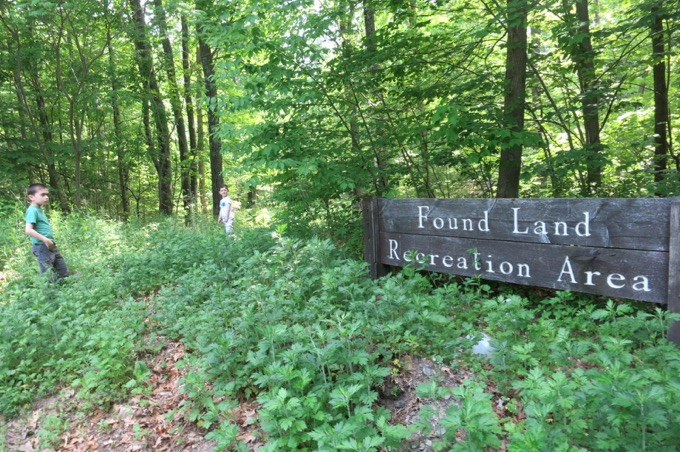 I didn’t have much hope for Found Land, but I figured it would provide a decent chunk of time in the woods with my sons on a sweltering humid Sunday. Nothing too steep, no trail too long, and not too far from our house.

Found Land is a rectangular-sort-of piece of 122-acre property at the Canton/Avon line just west of Lovely Road (route 177). And if you’ve never poked around the roads around Found Land, holy cow… there are some HUGE houses over there – and they’re still buiding even more massive mansions as I write in 2016. 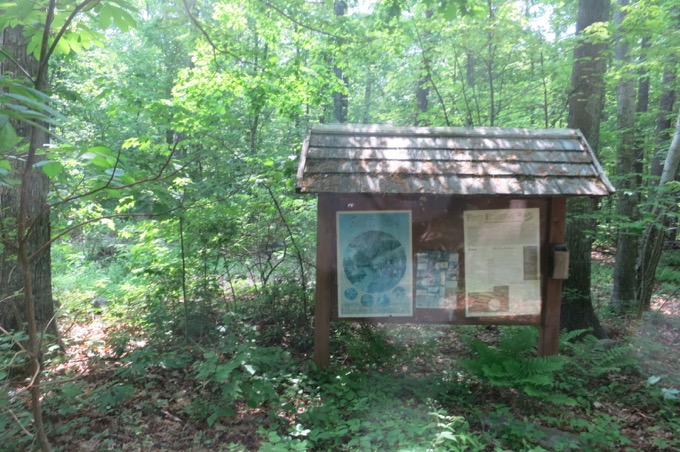 So it makes me happy that we dirtballs from “the bottom of the mountain” can come and park on their cul-du-sacs and traipse around the woods abutting their backyards. Thank you, Avon – Especially since many of the giant houses are officially in Canton along the northern edge of the property. 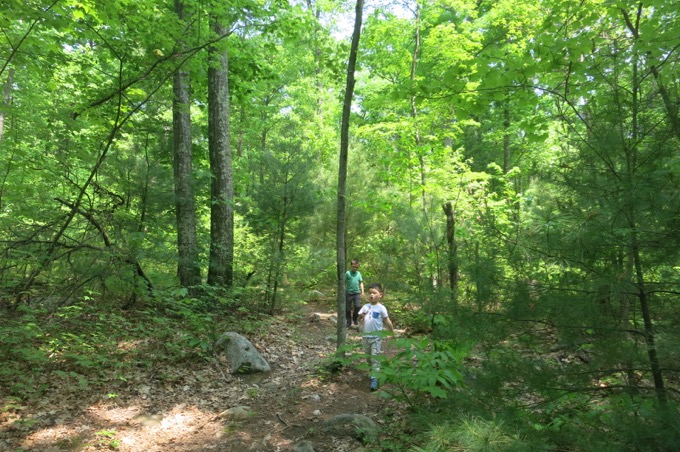 Speaking of being along another town’s property line, I suppose that’s how this place came to get its name. The Connecticut legislature granted Found Land to the town of Avon after it was “found” during tax mapping during the 1950’s. There were no giant houses around at the time, so it was just a slice of woods in northwest Avon.

Today, it is part of Avon’s active forest management program.

We entered via the most official trailhead at the cul-du-sac on Saint Michael’s Court. (Oh yeah, the road names here are fitting: Princeton Way, Queen’s Peak, Kingswood Drive, etc. So regal.) 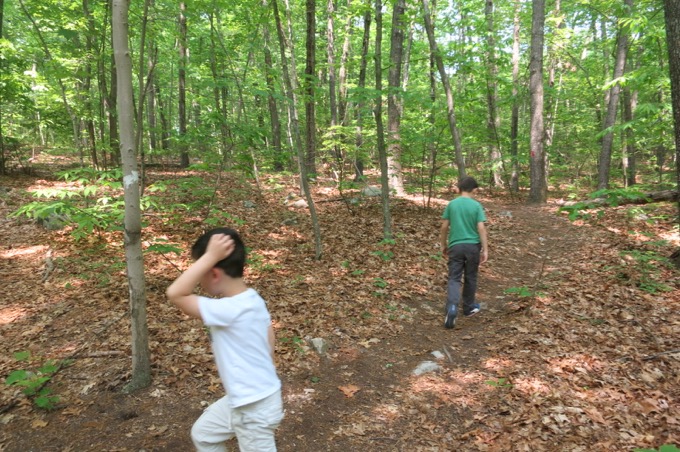 Confusion was common with the multitude of unmapped trails

There seems to be about 10 access points from the various roads surrounding the place, but most will probably disappear as the giant houses get built. (The map currently shows three other “official” trailheads, but yeah, there are a bunch more.)

Also, there are a ton of trails not on the map as well. Well-cleared and sometimes marked trails. All over the place. 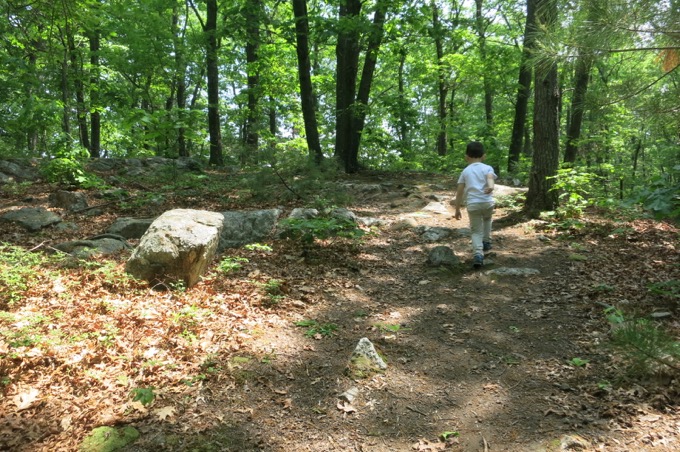 We were going to do a simple counterclockwise loop around the Found Land, but with all sorts of red trails and white trails and unmarked trails, it quickly became more exciting to try to get lost.

(Worried parents note: It’s nearly impossible to get lost here. Found Land is a rectangle bounded by a very well cleared and marked yellow trail which is bounded by roads with the oft-mentioned giant houses. Safety bearing of north would get us to the road on which our car was parked. We were fine.) 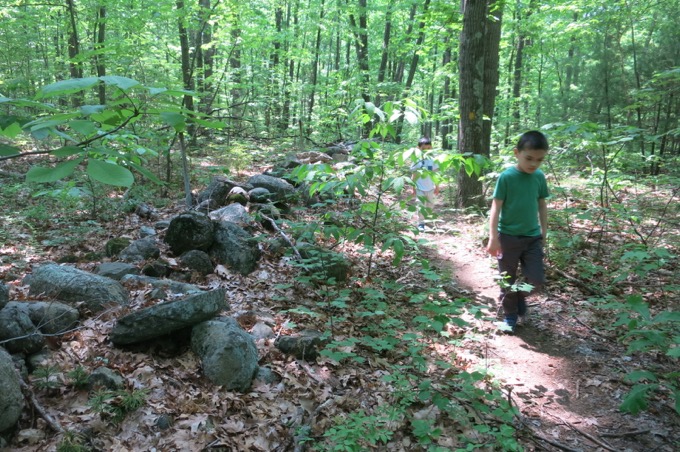 Getting lost… which would be quite tragic on a ninety-plus degree day. Oh my stars.

We wandered around a few different trails that more or less cut across the property from north to south. There wasn’t much exciting going on here at Found Land.

Until… until we hit the yellow loop trail again on the southeren edge of the property and began our “official” loop east again. We came across this: 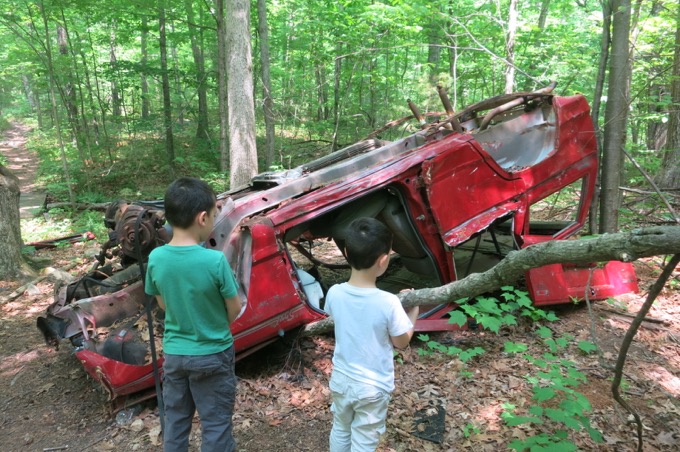 Calvin was simply fascinated by it. I was too. I had difficulty with his questions – how did it get here?, why is it here?, How did they flip it?, Who drove it here?, From whence did it come?, on and on.

These things are usually on woods roads, but this one… this one was down a regular hiking trail. And it was fairly new, meaning it didn’t make it here without the new-growth trees nearby.

I took the mystery to Twitter and got one question answered at least. My friend Rich the super-hiker sent me this picture: 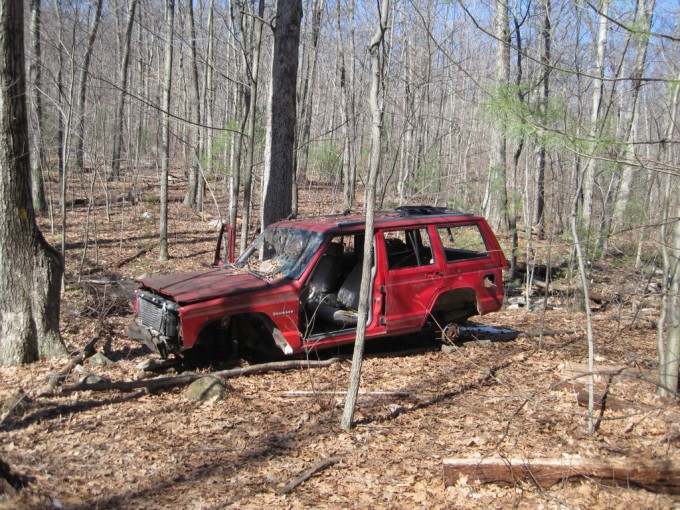 That’s the same car in the same spot. So enterprising youth got bored and rolled it over at some point. We continued walking the woods and nothing else quite matched the excitement of the upside-down truck.

Though at one point, on the extreme eastern edge, BOTH boys wanted to summit a spur trail to see if there was a view. 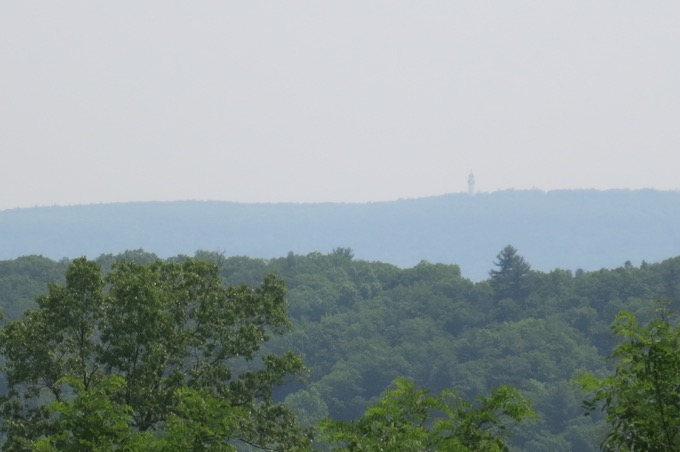 And there was! Sort of… the spur took us to another road with new construction on it and a hazy view of the Heublein Tower! The tower is sort of Calvin’s “thing,” since we see it from so many different trails and roads around the whole county. 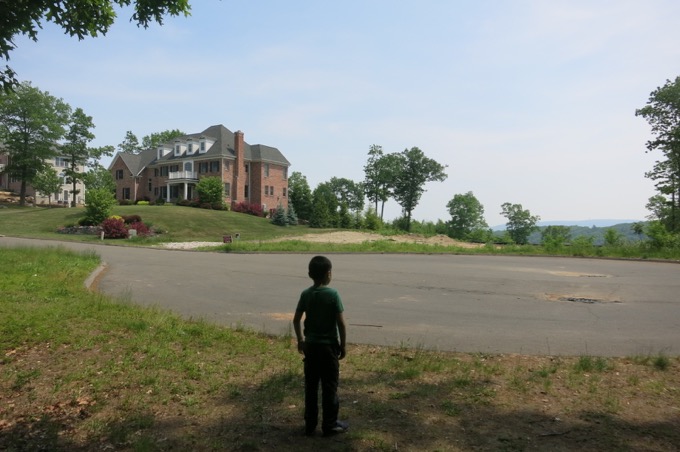 Damian checking it out

Glad we took the spur… and then we bumbled back to the car.

Found Land connects to Avon’s Huckleberry Hill property which connects to Countryside Park. So if you have a hankering to spend a couple hours walking in woods behind hundreds of giant houses in northwest Avon, you absolutely can do that. Go for it. 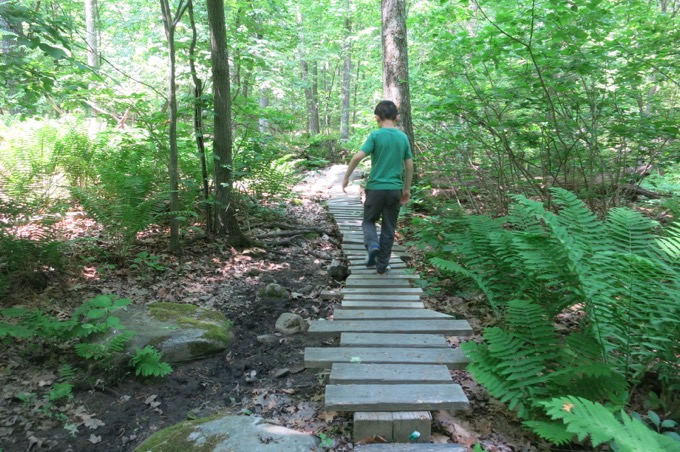