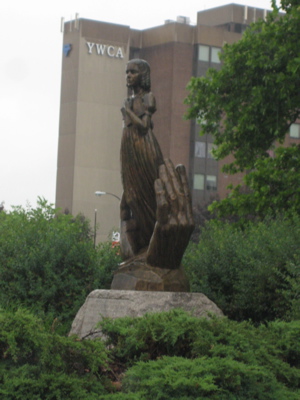 Because this page is dedicated to the interesting statue that thousands of people pass every day without having the slightest clue what it’s all about. At least the dedicated relative few of you who read this will now know.

The giant hands make the sign for the “light” which Thomas Gallaudet brought to all deaf people through education. Gallaudet was a Yale graduate and had become deeply interested in the deaf through observing Alice Cogswell as she played with her young relatives. He had made some progress in teaching her written words, but went on to study deaf teaching/signing techniques in England and France. He ultimately started what would become the American School for the Deaf and was THE pioneer for deaf education in America.

The monument, designed by Frances Wadsworth (sound familiar?), was unveiled on April 18, 1953. It was sponsored by deaf people through the New England Gallaudet Association for the Deaf.

The figure of a girl, while based on Alice Cogswell, is intended to represent all deaf children in America, who have received an education thanks to the pioneering work done in Hartford.

Personally, I think it’s a really cool statue and it’s a shame that the intersection in front of it is so dicey – so dicey, in fact, that most people probably never notice it and instead prefer to not get in a head-on collision.