The Advocate nukes online articles pretty quickly, so, y’know… I had to save it here for posterity. Note: These two pictures did run in the story, which I was so happy about because Damian is rocking the Thumbs Up in the second one.

Checking Off the List
One man sets out to see every single museum, oddity and general point of interest in Connecticut

Every time Steve Wood drove by it, the sign taunted him. By nature a cataloger and a traveler, Steve Wood’s list and wanderlust had been put on the back burner by the then-recent birth of his son, Damian. The Delaware native and University of Connecticut graduate is a high-energy guy, who describes himself as “obsessed with being efficient and rational to the point of being annoying.” It was inevitable, maybe, that he would follow the sign, which would indirectly inspire him to catalogue the state’s out-of-the-way museums and attractions.

It was right there, every day, on the road near his in-laws’ New Britain home: “Industrial Museum.” Every day his nagging curiosity grew.

“I was asking my wife, ‘What the hell is that? You grew up here, did you go there?’ She had no idea,” Wood said.

Enlisting the aid of a buddy, he ventured to the museum in 2006. 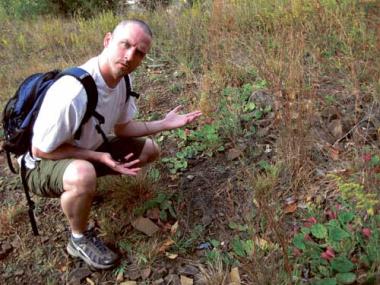 “I don’t know how to describe it because there are these two ancient guys sitting there, and … it’s incredibly impressive,” Wood said. “I don’t know anything about tools, or the history of the industry of New Britain, or any of the post-industrial towns in Connecticut. These older guys were totally into it and just loved it. To hear them talk and to learn from them was something that I thought I had no interest in. (It) turned out to be two hours of hanging out with these guys.”

From that trip, an epic, narrowly focused project was born. Wood, in his mid 30s and a resident of West Harford, decided he would visit every museum in the state, no matter how small or obscure in subject matter. He had written for a handful of blogs already, and created the Web site Ctmuseumquest.com to house his pictures and impressions of the different museums.

Simply creating the list was a challenge. Originally, he created a list of about 100 museums. Soon, as he culled through the Internet while trying to get his then-newborn baby to sleep, the list ballooned to four times that number.

“It took over a year, really,” Wood said. “There are plenty of Web sites; the state sponsors a bunch. Wikipedia didn’t have a listing at all back then. They actually used my list “I worked with the lady and now it’s pretty comprehensive. It was a combination of probably 50 different lists and things.”

The list is still a work in progress, but he’s made a dent in it. Employing a keen eye for details and a droll sense of humor, Wood records his excursions to the state’s overlooked museums. It’s an amazing site, compulsively readable and, in an unexpected way, a great tribute to the state of Connecticut. The stated mission of the site is “Destroying the myth that there is nothing to do here.” Wood makes a state sometimes written off as dull seem endlessly fascinating.

Many of the small museums covered on the site share similarities. The displays – old chairs, old clothes, miniature historical scenes – are sometimes in and of themselves not exactly interesting. But the people behind them often make the displays compelling.

“A big thing that keeps it interesting is the people explaining things,” Wood said. “For me, it’s not the hearth or the bed or the chair, it’s who laid down in the bed. It’s who sat down in the chair. And sometimes it’s nobody. It’s just the fact that the house hasn’t been knocked down for a few hundred years and that’s why it’s a museum.”

Not that every museum is the same. He’s enjoyed several pleasant, and maybe less than pleasant, surprises.

“I haven’t written about it yet, but this one place in East Haddam. When I got there, they weren’t open yet,” Wood said. “(The museum operator) let me in through the basement. There was a Klu Klux Klan robe in the corner, so of course I took a picture of it.”

That wasn’t Wood’s only encounter with what he termed “unfortunate Americana.” The Special Joys Doll & Toy Museum in Coventry (often called “The Pink House”) offered surprises both charmingly surreal and culturally queasy.

“Their collection is impressive, that’s for sure. I mean, I don’t know anything about dolls,” Wood said. “There was a kindly older woman and a weird guy who was obsessed with dressing dolls the whole time we were there. And then, while we were there, we found this whole corner of an unfortunate piece of Americana; a large collection of racist postcards and things like that. My friend and I went through it aghast, yet laughing uneasily the whole time.”

“The Witch’s Dungeon place out in Bristol continues to blow my mind,” Wood said. “It’s so bad and it’s so lame and yet it’s a phenomenon. Two-hour waits to get in and go through what amounts to a three-minute experience that’s just so corny.”

Those places are the exceptions; Wood’s site is devoted far more often to the joys of discovery and celebration of peculiarity than to jibes and put-downs.

“In New Haven there’s a Knights of Columbus Museum,” Wood said. “I’m not a Knight of Columbus and I don’t really understand all those societies, so I didn’t know what I was getting into. Let me tell you, that place is impressive. They have art from the 15th century. They have legitimate armor from the Swiss Guard from the 16th century, stuff like that. It’s a beautiful place. I couldn’t believe it. I had no idea.” 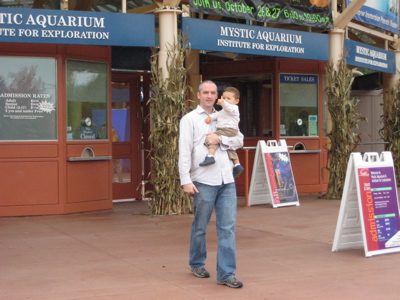 Cataloguing, visiting and writing about every one of the state’s museums is a daunting enough task, but that’s far from the whole of Wood’s ambitions. An equal amount of the site’s space is devoted to Connecticut’s cultural curiosities, like Waterbury’s Holy Land and Willimantic’s Bridge Frogs and nature trails. Just as he hopes to document all the state’s museums, he hopes to capture the experience of the entire 825 miles of official “blue-blazed” trails in the state.

The Connecticut trails, he said, are accessible to almost anyone interested in hiking, and he hopes his site would encourage people to use them. He’s personally gunning to get it all under his belt, and thus become a member of the Connecticut 400 Club, a distinction awarded by the Connecticut Chapter of the Appalachian Mountain Club for people who have hiked all the state’s trails. You get a badge if you make it, but that’s not Wood’s major motivation.

“For me, it’s a list. And therefore it’s something I have to complete,” Wood said.

Several times, Wood has run into cases of now museum, now you don’t. His site features a long list of small state museums that have been shuttered. One well-known eccentric state museum, Old Lyme’s Nut Museum, closed in 2002 when its operator and frequent talk-show guest Elizabeth Tashjian fell into a coma (she died last year).

But also, he said, there are museums driven by individuals or groups driven by singular obsessions. Those people won’t last forever, and there aren’t replacements waiting in the wings. Which is a shame. Wood said places like Canterbury’s Haul of Fame trucking museum are staggering in their distinguished oddness but unlikely to last very long.

“You go there, and you’re like ‘Am I going to get killed, Deliverance-style?’ But it’s amazing,” Wood said. “They have this huge collection. It’s awesome “I don’t know anything about trucks.”

Wood views the project as a modest attempt at historical preservation, but worries about his effect.

“I don’t run into people my age,” Wood said. “It’s always retired people. Are people from the younger generation going to keep things going? I really don’t think they are. I live with this dichotomy within myself. I wonder if I’m contributing to the downfall of these places because I’m chronicling them and writing about them so that people can go to my site, check it out and say, ‘Oh I don’t have to go to that place.'”