I toured some buildings on the Yale campus once, including the incredible Payne Whitney Gym. It’s such an incredible gym, I called it a museum and wrote about it. And notably, no one called me an idiot for doing so.

In the lobby of the massive building stands Handsome Dan. The original, stuffed Handsome Dan, Yale’s first Bulldog mascot – which was the first college mascot in the US. According to legend, a Yale rower bought an English Bulldog from a New Haven blacksmith for $5.00 in 1889 — although the Yale Alumni Magazine suggests that in reality, the first mascot was likely a purebred bulldog bought from an esteemed New Haven breeder. So the dog was purchased as a pet, not as a mascot… and the story of how he became Yale’s mascot is a pretty interesting. 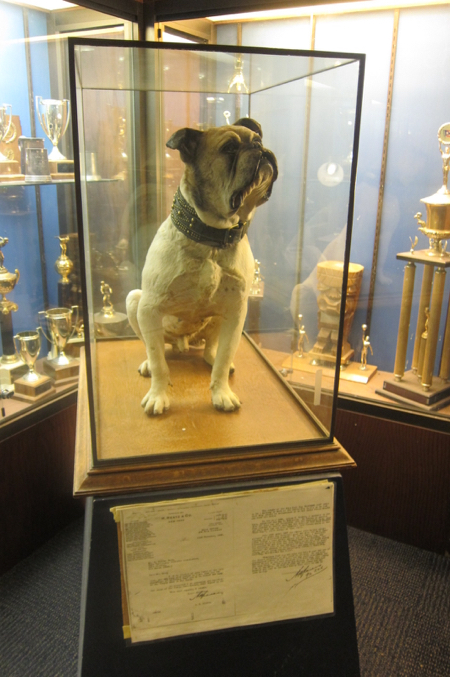 Of course, Wikipedia makes it more interesting because it’s clear that it gets edited a lot.

Handsome Dan was selected based on his ability to tolerate bands and children, negative reaction to the color crimson and to tigers (the symbols of rival schools Harvard and Princeton respectively), bought by Yale student Andrew Barbey Graves, who cleaned up the dog and named him “Handsome Dan.” Soon, Dan followed Graves everywhere around campus, including sporting events.

The students quickly adopted Dan as the Yale mascot. Before football and baseball games would begin, Handsome Dan founded a tradition and a dynasty by being led across the field. One newspaper reported: “He was a big white bulldog, with one of the greatest faces a dog of that breed (English) ever carried”. This was not an exaggeration, as Handsome Dan was one of the finest specimens of his breed in America, and went on to win first prize at the Westminster Dog Show and at least thirty other first prize ribbons in the United States and Canada.

I don’t care to verify any of that. It’s Wikipedia, home of statements like “and a dynasty” with regards to Yale football. (I know, I know, they were national powers 100 years ago.)

According to the Hartford Courant, “In personal appearance, he seemed like a cross between an alligator and a horned frog, and he was called handsome by the metaphysicians under the law of compensation. The title came to him, he never sought it. He was always taken to games on a leash, and the Harvard football team for years owed its continued existence to the fact that the rope held.”

The Philadelphia Press reported that “a favorite trick was to tell him to ‘Speak to Harvard.’ He would bark ferociously and work himself into physical contortions of rage never before dreamed of by a dog. Dan was peculiar to himself in one thing – he would never associate with anyone but students. Dan implanted himself more firmly in the hearts of Yale students than any mascot had ever done before.”

You see why I’m not going to verify anything? The existence of this page you’re reading owes its entirety to the fact that Handsome Dan was the first college mascot in the US. But there’s a quote on Wikipedia from the “Philadelphia Press” stating “than any mascot had ever done before,” implying “at Yale.”

The lesson here isn’t that Handsome Dan wasn’t the fist US college mascot. He was. It’s that Wikipedia is often nonsense. 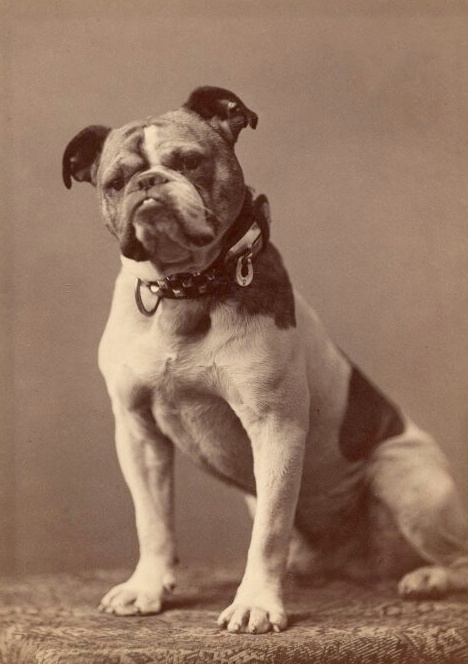 After Dan died in 1897, he was stuffed and put behind glass in the Payne Whitney Gymnasium lobby, where he is still on display. In 1909, in celebration of his life, the Yale Daily News first referred to the Yale freshman basketball team as the Bulldogs. (Yale’s official mascot is the Bulldog. They are the Bulldogs even though people would assume that Elis, their other name, would be official because it’s so old-timey. The Elis comes from Elihu Yale, a Welsh merchant for whom Yale College was named in 1718.

And by the way, don’t get purebred English bulldogs. They’ve become a very unhealthy breed, and recent Handsome Dan’s have not fared too well, nor have Georgia’s Ugas.

Sources: Wikipedia and The Yale Herald