If you are reading my thru-hike of the Hockanum River Trail in order (generally south to north), you have already read the Hackett Trail page. If you haven’t, it’s a fun one and you should. Better yet, start at the beginning with the HRT introduction and catch up. 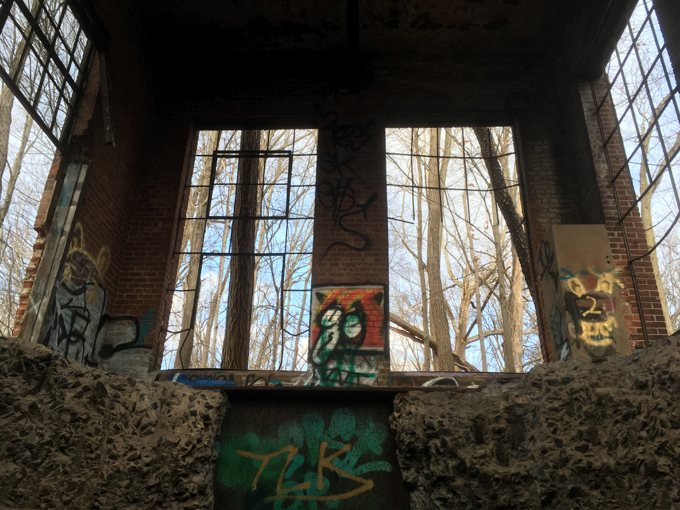 If you’re not familiar with the Adams Mill Restaurant, it’s one of those relics that still gives you a free meal on your birthday. They’ve been doing that for decades (probably). And while that’s super fun, this 2 mile loop behind the restaurant is even more fun.

2019 Update: The Adams Mill has closed. So all references to it are now obsolete. Ericit Brewing Company now fills the space. 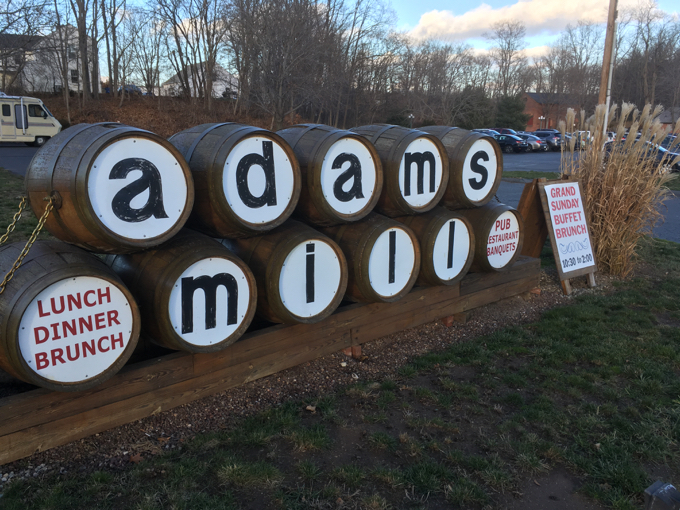 And I’ll go so far as to say that the trail is a good one for kids too. Explore ruins! Say “dam” a bunch of times and not get in trouble! Cross a railroad trestle high above a river even though it’s technically against the rules! Walk on rickety planks above that same river! 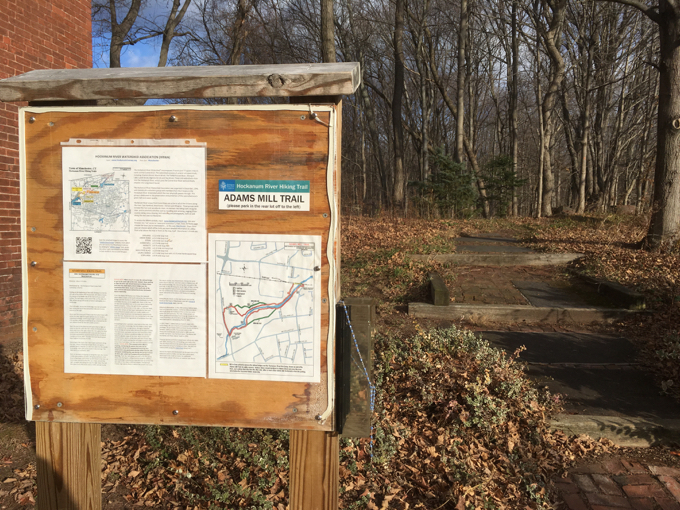 Once again, the HRWA has blazed a fascinating and fun walk through time in the middle of Manchester. 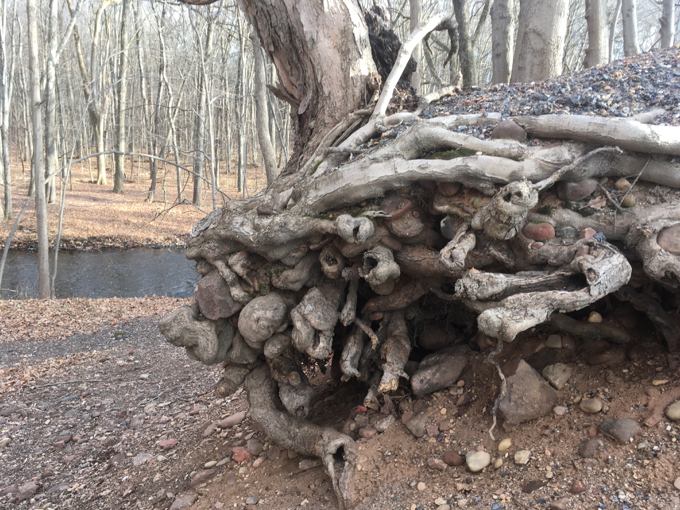 The trail starts right next to the restaurant brewery. Once again, there is nice signage and the entire trail is cleared and blazed well. And there is, of course, some signature HRT bridgework. 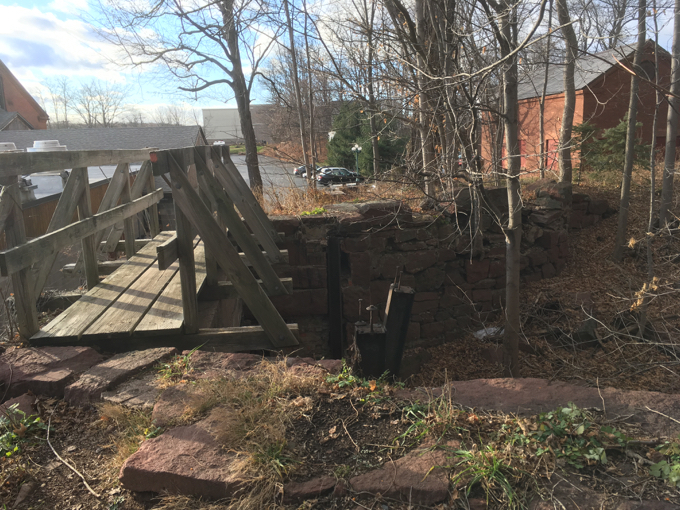 The first stretch follows an old earthen dike around the back of the restaurant. The dike contained the 30-acre Adams Pond for the mill’s water power back in the day. Pass behind some other businesses and down towards the river. 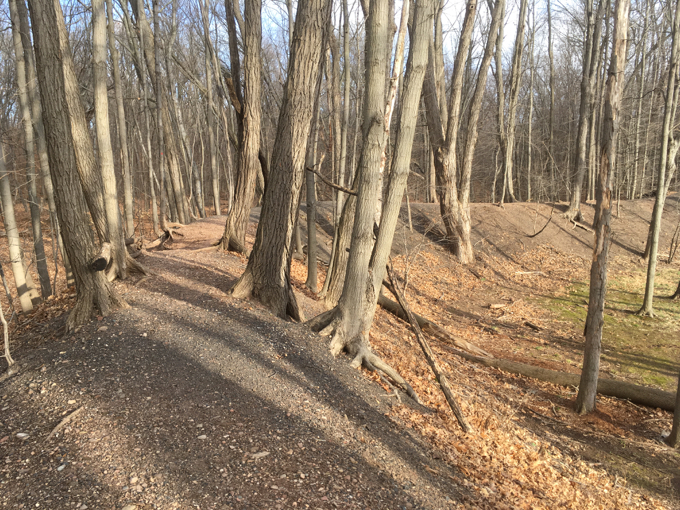 Here’s where it starts to get really fun. There are a bunch of ruins here. At the bottom of some steps, a short side trip to the right, down the river, gives the hiker a view of the old sandstone dam ruins and the frame of the brick hydroelectric structure built by the E.E.Hilliard Company around 1907. This dam burst during the great New England Hurricane of 1938. 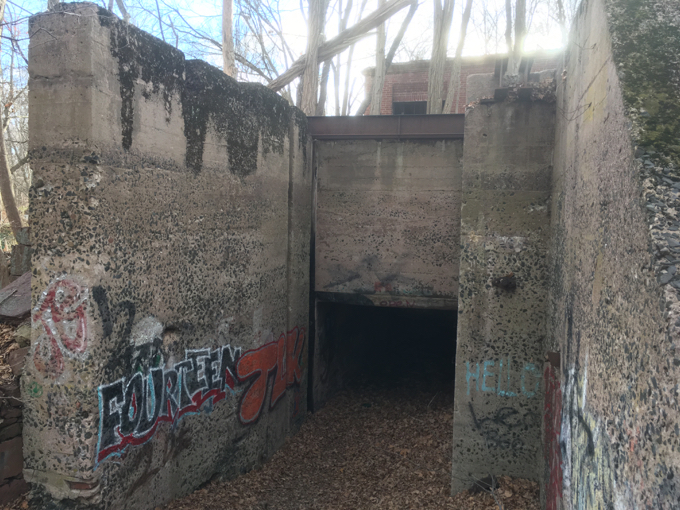 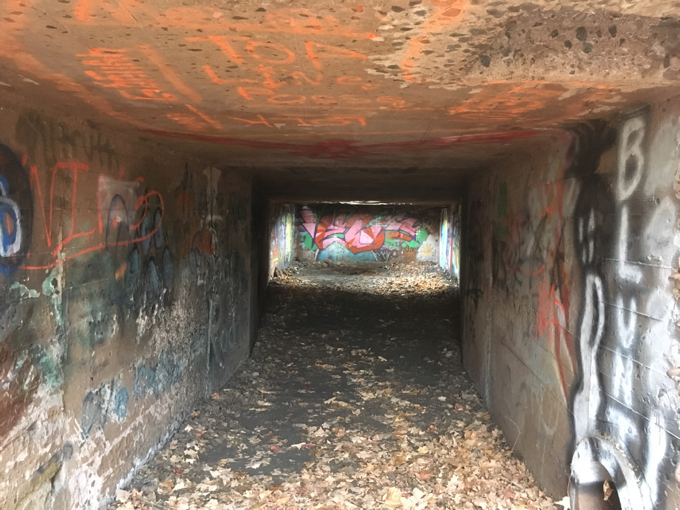 There’s also a building in which to poke around. I’m sure this isn’t the best place at the wrong time of day (or night), as I’d guess it attracts some nefarious folks doing bad things. Fortunately for me, on a cold afternoon, I was alone to explore the building. 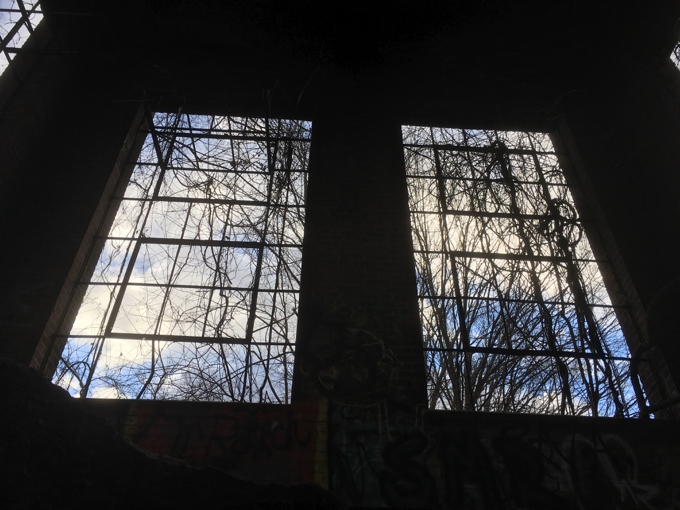 Back to the trail and heading up river, the trail is a nice little walk through the woods. As I approached the northern end, I began noticing some of those (now expected) crazy trail-works on the other side of the river. The HRLPC is nuts, I’m telling you. 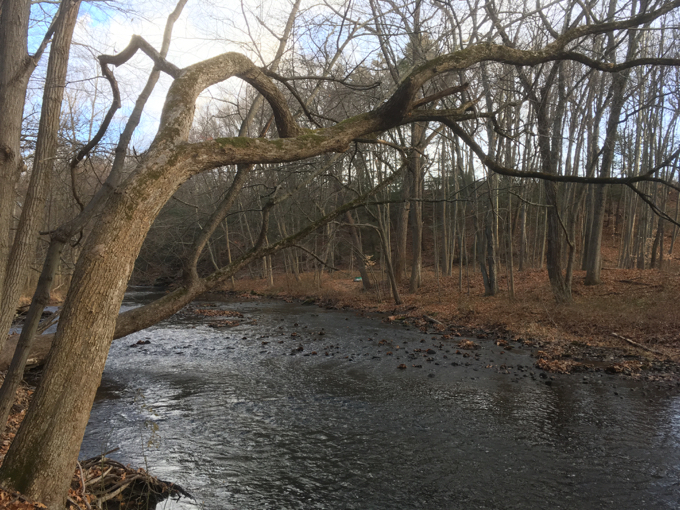 I also noticed the railroad bridge ahead. Now, the HRWA states on their trail description,

So now I’ve said it too. 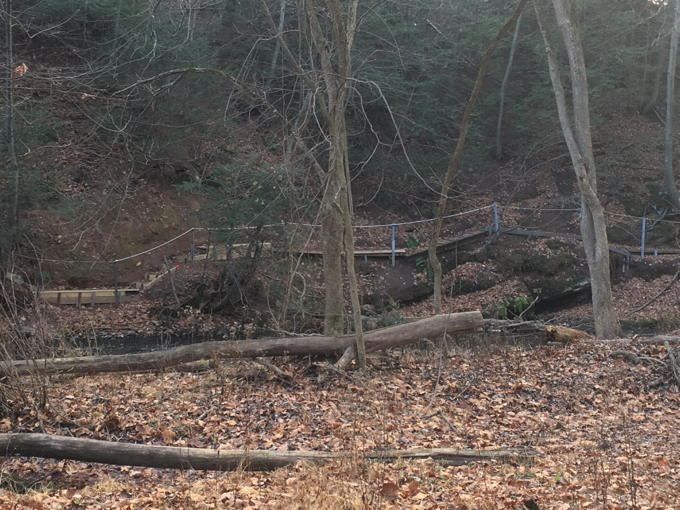 Craziness on the other side of the river[

But let’s be honest. To do what they “officially” suggest you do is… how do I put this politely… Dumb? No one is going to do that. The HRT folks know that, I know that, you know that. And apparently the guy who blazed this trail knows that: 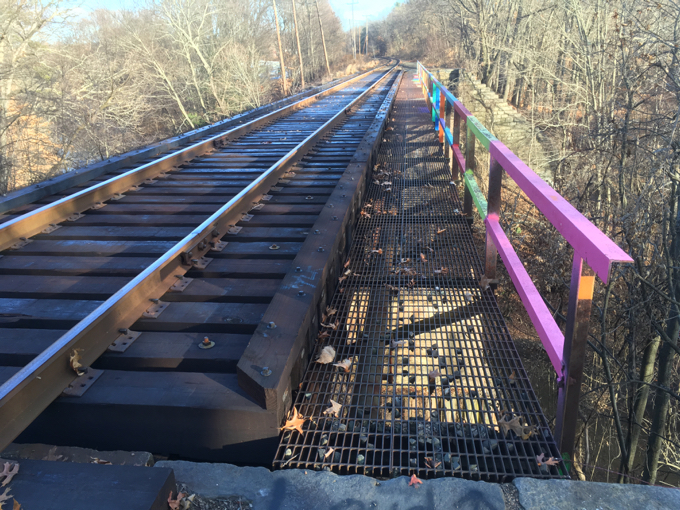 Clever. “We’ll just put our little orange blaze right here and it sort of blends in with the graffiti.”

The bridge is safe to walk across. BUT – you didn’t hear that from me. “Officially,” you should retrace your steps all the way back to the dam remains and then… never mind. You’re not going to do that. 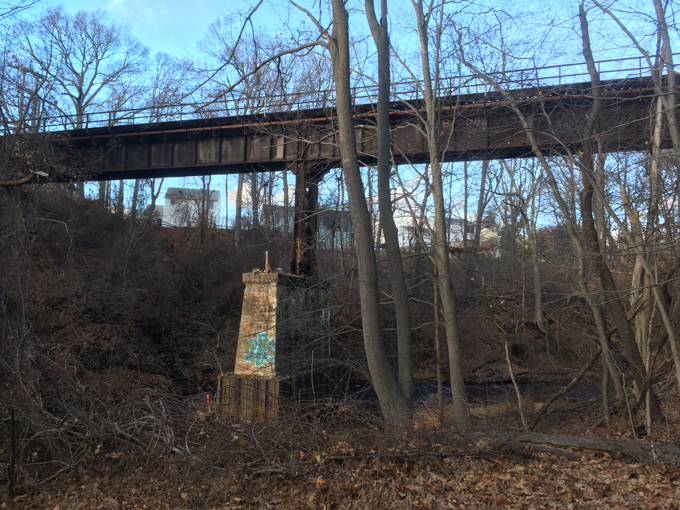 The trestle is pretty high up, I must say. Safely across and back down now to the other side of the river, the going gets rad. 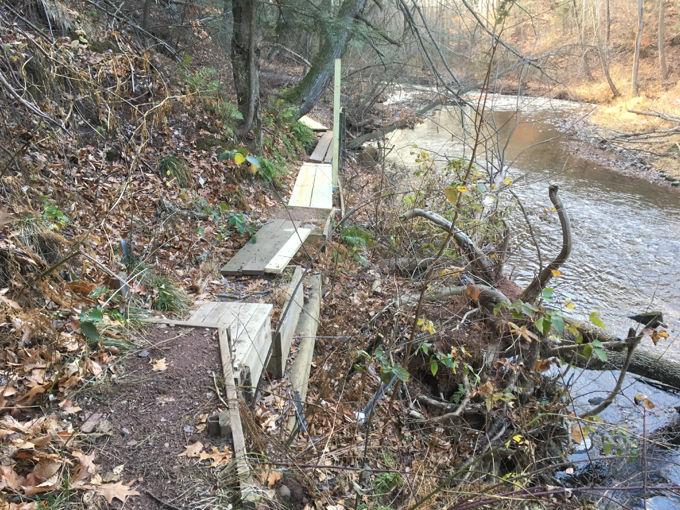 I’d enjoyed some similar trail structures on the New State Road section, but this is even more intense. The steep terrain on this side of the Hockanum means that any trail will suffer from erosion issues. So the trail crew has spent a LOT of time and effort building stable walkways for several hundred yards. 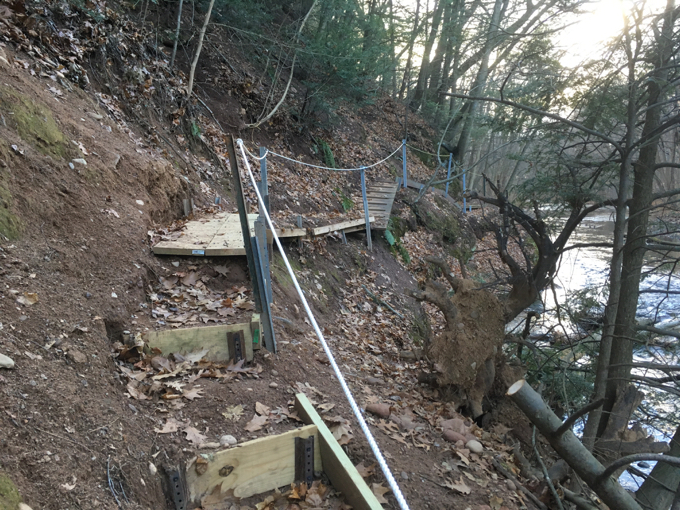 They employ all sorts of techniques, and the result is astounding. Again, this trail is in the middle of Manchester, Connecticut along a little river that not many people know about. 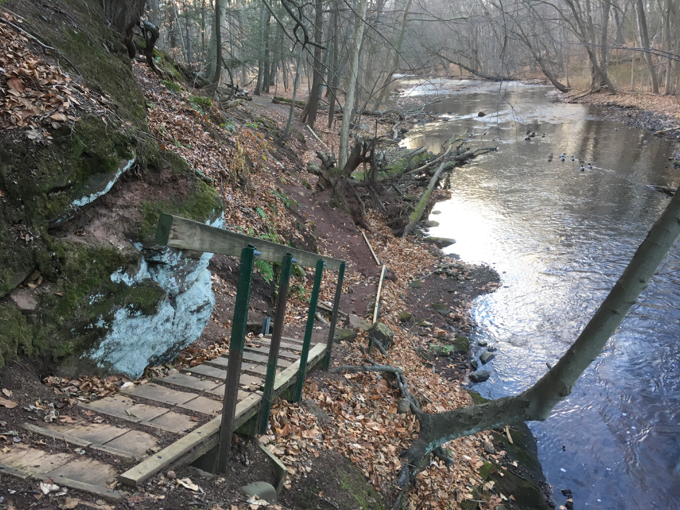 As I’ve said before, I love it.

Not only that, but once I returned to near the Adams Mill, the trail is blazed really well as it navigates between businesses and driveways out to Adams Street for a short road walk back over the Hockanum an on to the restaurant’s parking lot. 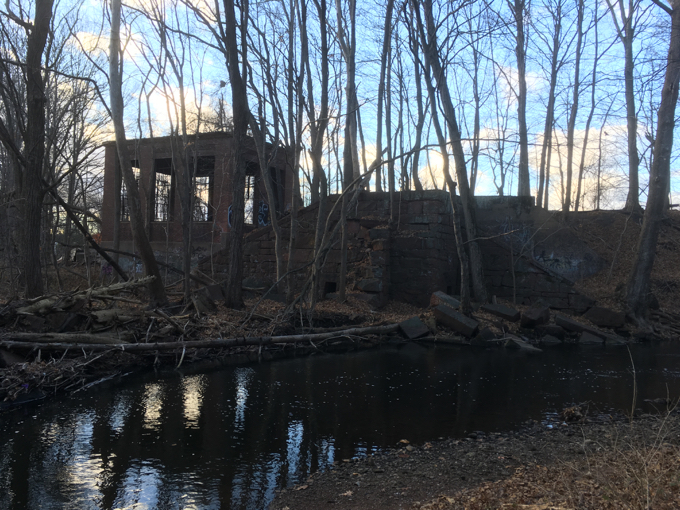 The sun sets on an industry…

Great little hike and as I said at the outset – plenty for little kids to see and do and imagine. Just don’t you dare walk over that railroad bridge*. 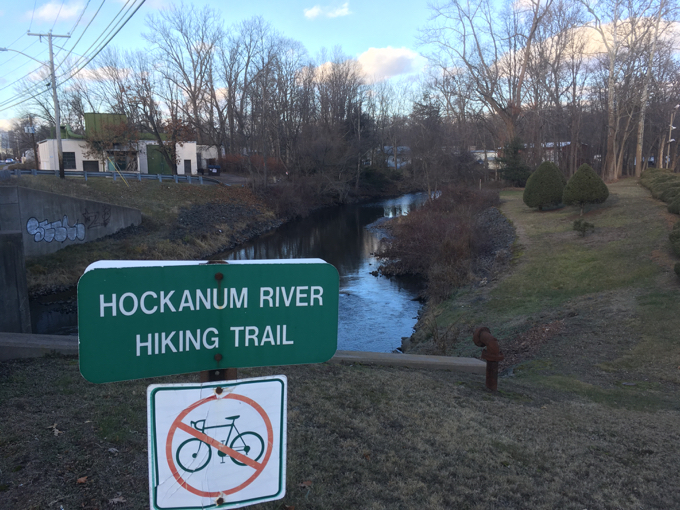 Continue on to Section 15, Pitkin Trail 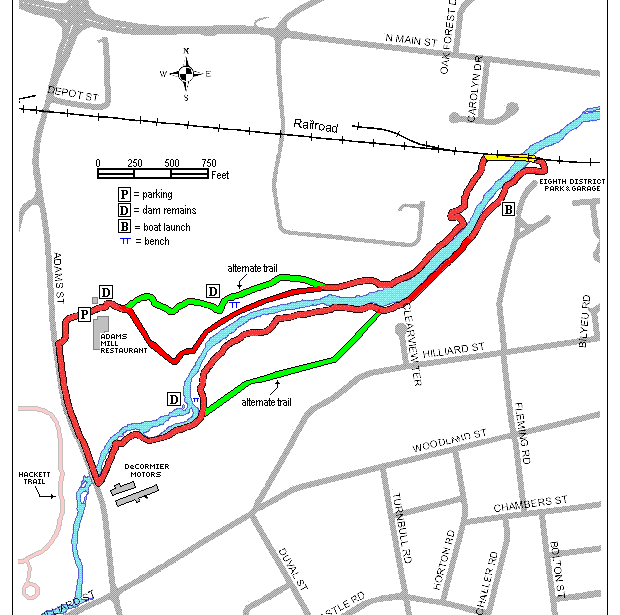