If you are reading these Hockanum River Trails south to north, you have already read the Dart Hills SE & SW Trail page. If you haven’t, it’s a fun one and you should. Better yet, start at the beginning with the HRT introduction and catch up. 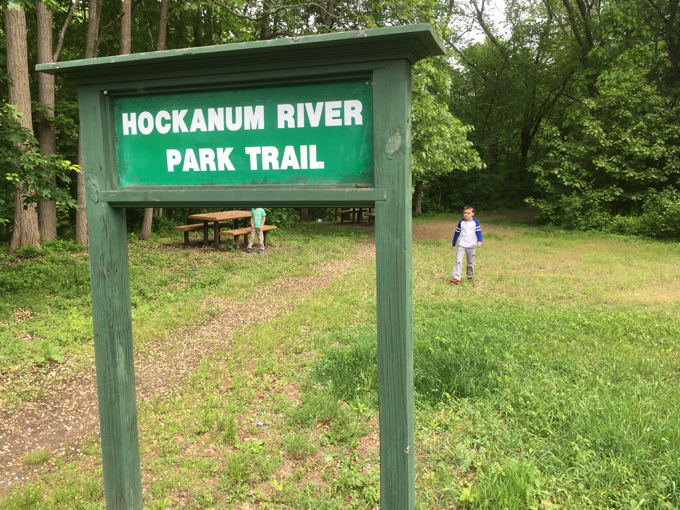 Damian and I had so much fun completing the southern Dart Hill trails that we brought Calvin along for the northern section. After all, it would be ending at a place he would surely love. Leaving him out would have been a disservice to any six-year-old boy.

More on that later. 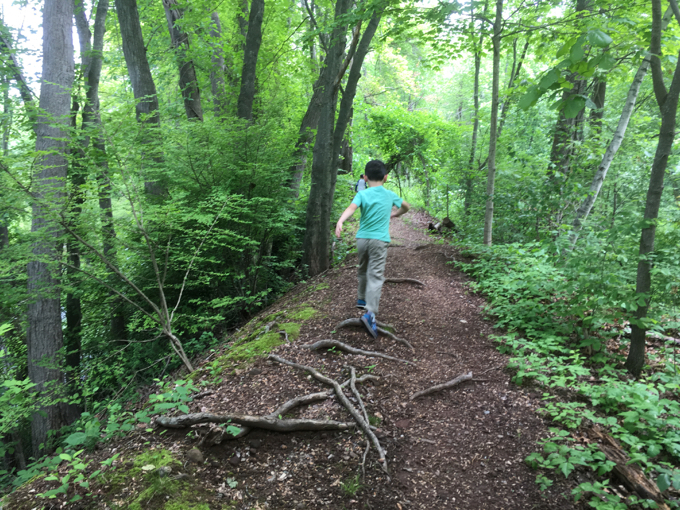 This section begins a short road walk away from where the last section ends. Negligible, really. There’s a little picnic area here, but it’s not exactly destination picnicking.

We were now on the “other” side of the Hockanum River and this section is a bit woodsier than most through East Hartford, Manchester and Vernon. The Hockanum River Watershed Association says:

This is one of the most scenic, hilly and tranquil of all the trails along the Hockanum River. It parallels the river, winding through a lush green forest valley totally away from all intrusions of traffic noise. 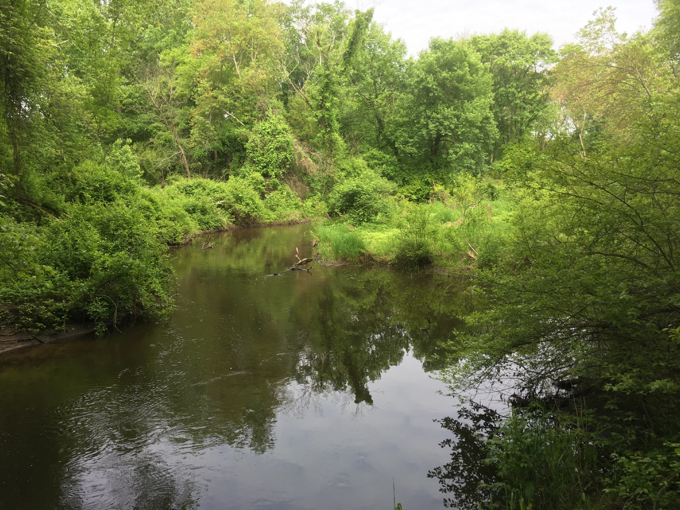 I’d love to meet whoever it is who writes these things. They deserve an award. I’ll pin it to their lapel at the same ceremony I give awards to the trail construction crew for building what I contend is the most extensive network of bridges, decks, sidewalls, stairs, and ropes in the entire state.

Once again, this section is well-maintained and you can’t really get lost. After all, where else are you going to find a trail with curbs built in? 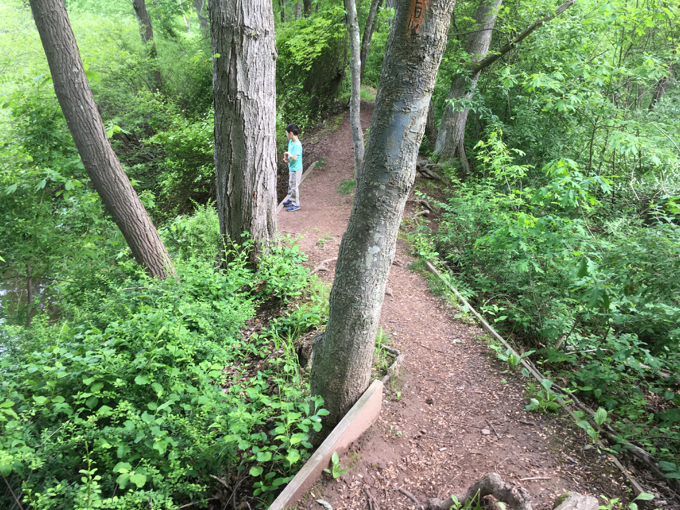 I’d like to note that as I look at the pictures for this page, my son Calvin cracks me up. It’s very subtle, and perhaps only my wife who will never see this page will get it, but he seems to be clowning in almost every picture.

When hiking with Damian, we must constantly wait and be patient and prod… so I guess Calvin has taken it upon himself to make up his own entertaining internal dialogue to keep it interesting. On this random stretch of rocks, he went full-on Ninja Warrior the first time through. Then he did it again as an unbalanced “old man” (his words). This is what he does. 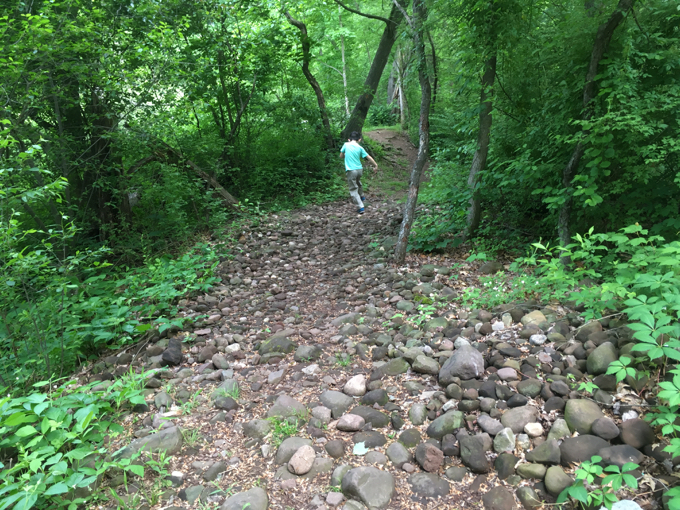 And then there’s Damian… slowly plodding through the ferns… 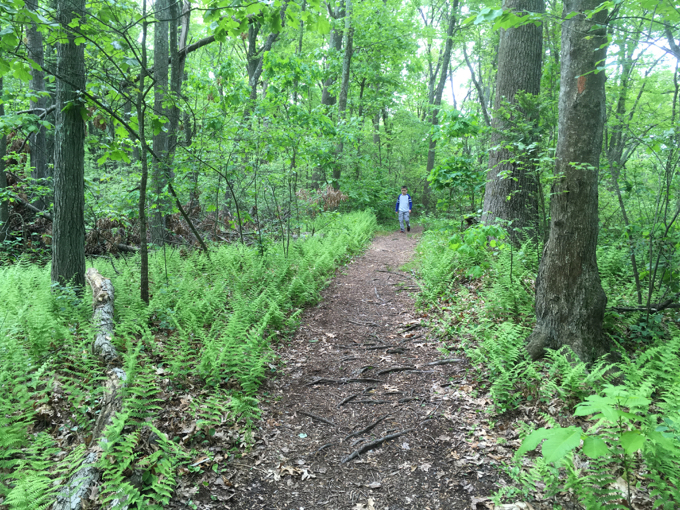 The Hockanum itself along this section is unimpressive. It is meandering and swampy. This does allow hikers to view different flora and fauna than exists along the faster portions of the river, but in the summer with that hazy buzz it just didn’t strike me as exciting as hiking the trail elsewhere back in the winter. 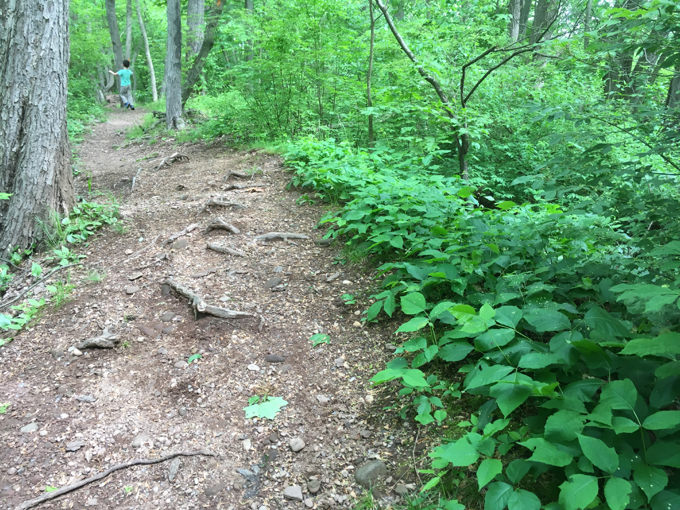 The description above is correct in that the trail is far enough away from the fairly busy route 83 that you forget about it. (We were in the woods behind cult-fave Utsav Indian Cuisine to give you your bearings, assuming you like Indian food. 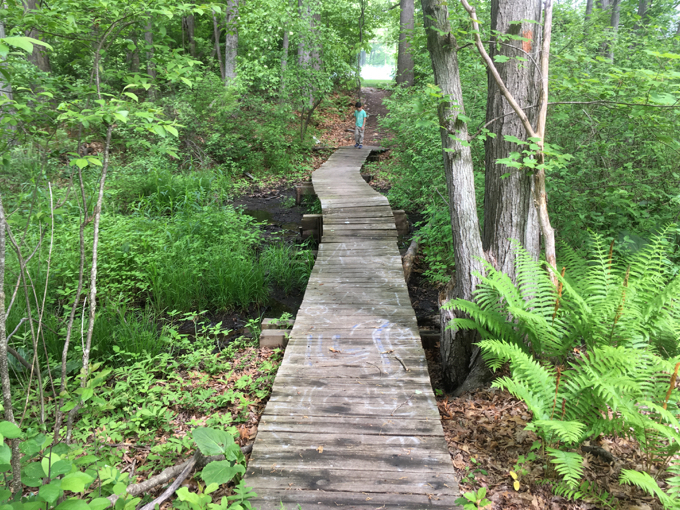 Across another big bridge and then right up to a pool. This is the Countrywood at Vernon pool. Nobody was swimming but I imagine it’s pretty weird to be hanging out by your apartment complex’s pool and some weird guy and his two kids emerges from the woods to stare at you. 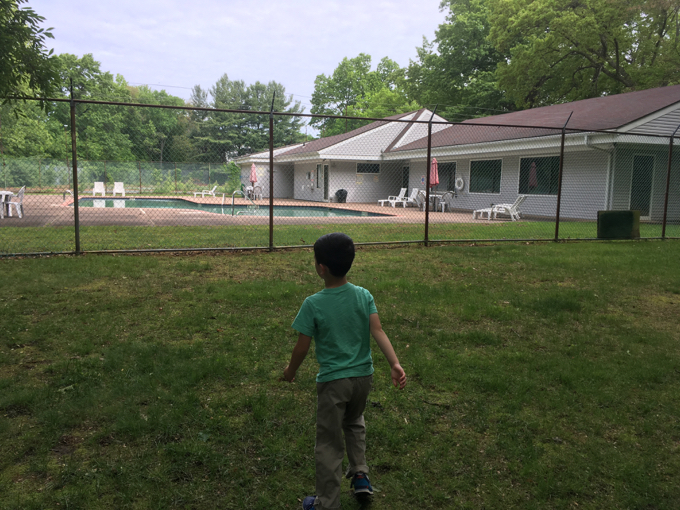 We continued north, through a tunnel of poison ivy. Especially terrifying were the HANGING LEAVES OF DEATH we had to pass under. 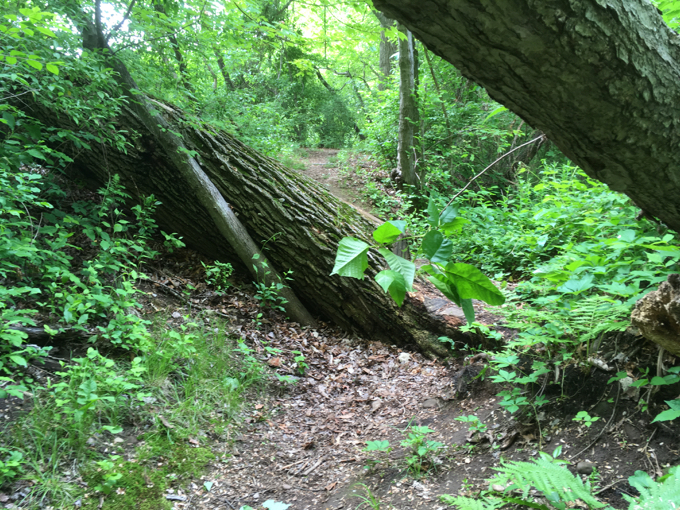 There are some side trails here – one goes out to Paul’s Pizza on Route 83 if you want to pop in for a slice. We chose not to explore those trails and instead continued up the Hockanum proper. 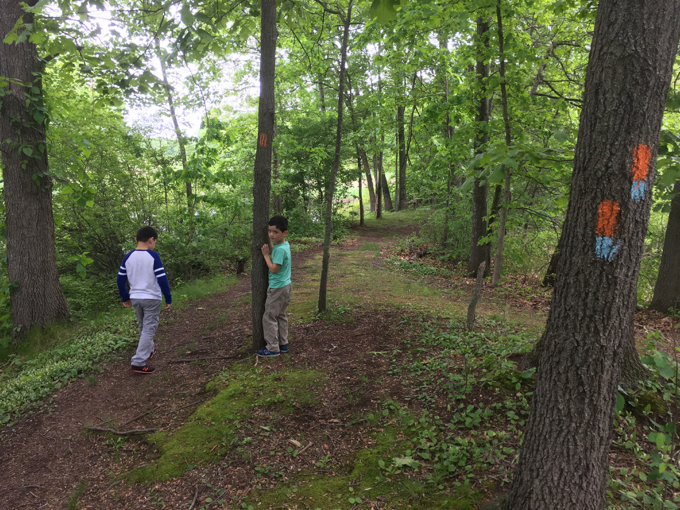 After all, I’d given Calvin a clue as to what we’d soon be passing. “A place with tons of doody.” He couldn’t wait.

First, some posing on a block of cement. 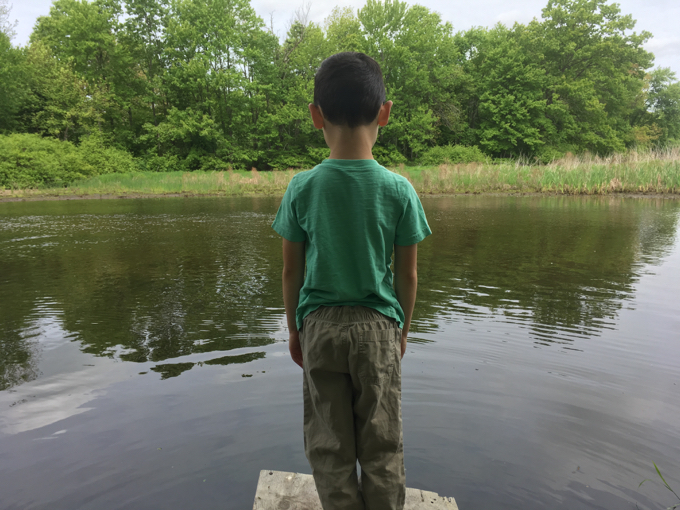 Then across a metal grate bridge, because I guess they got bored of all the wood at some point. 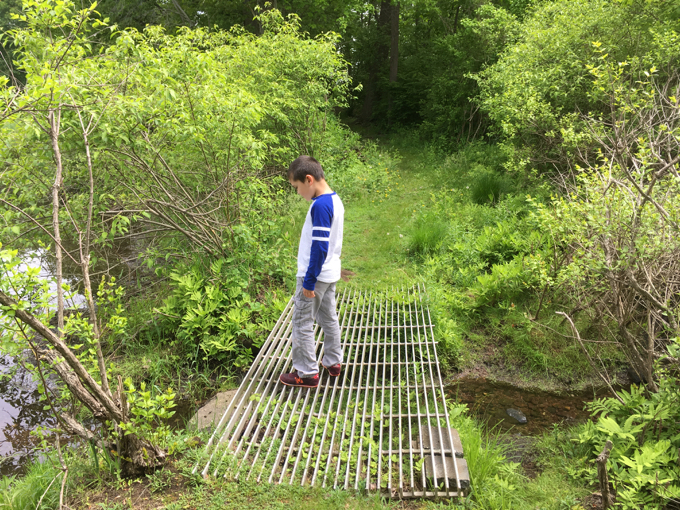 The trail here must be a pain to maintain, as it is clearly floodplain. But they do – and they do it well! Here’s another picture that I look at and know Calvin is acting. Posing. Being doofy. 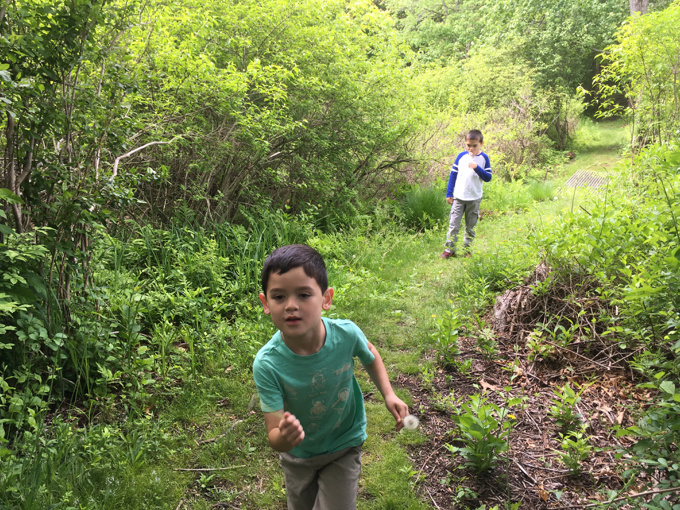 Whereas you probably just see a kid in the woods. Oh well, your loss. As his father, it cracks me up. Some twists and turns and… another apartment complex. 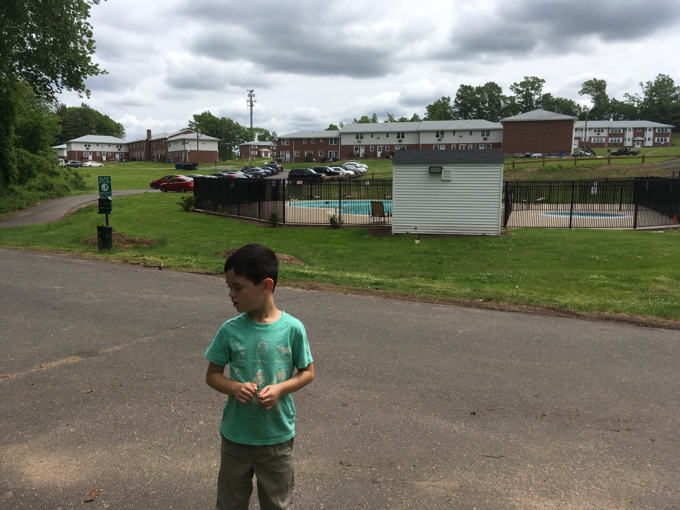 This is Vernon Gardens. They have a pool too. The trail follows the road for a minute and then dips back into the woods. The Hockanum here is like one of those snaking Midwestern rivers that slows to a near standstill in summer. Oxbows form and disappear over time and turn into swamps and riverine marshland. 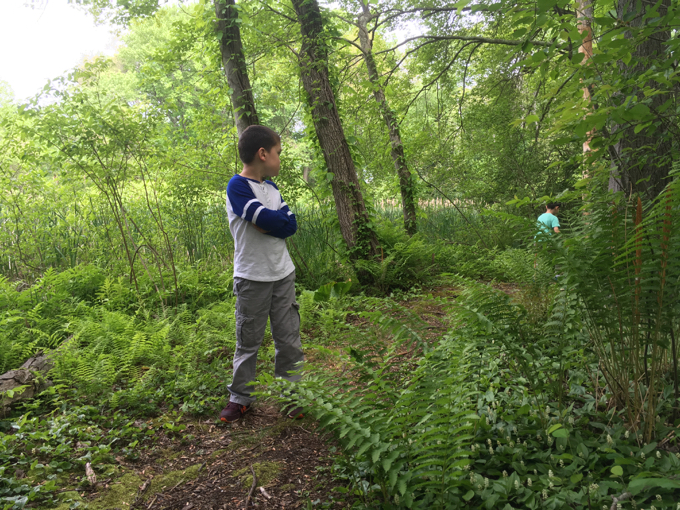 The woods here are pretty nice. Huge ferns tickled our wrists whilst wetland birds tweeted our passing. This was it! Up some steps and then across a lawn next to… the Vernon Sewage Treatment Plant! 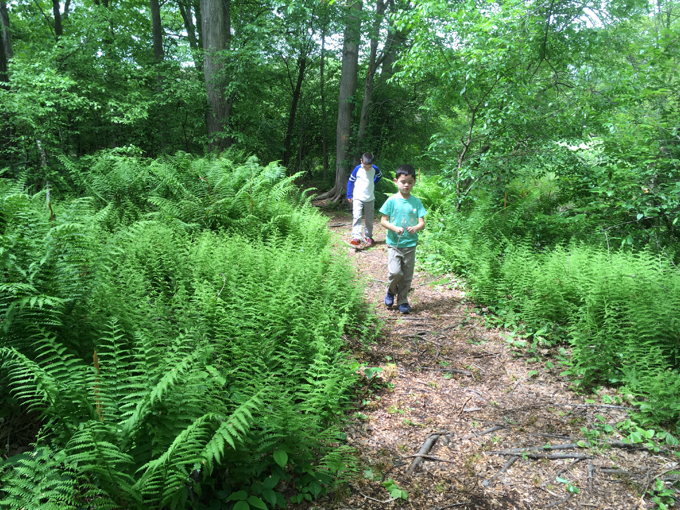 Yes! I’ve joked before that the alternative name for this trail is the Sewage Treatment Trail. Starting at its southern terminus in East Hartford, the trail passes right next to FOUR of these places: East Hartford, Manchester, Vernon, and Ellington. And two landfills to boot. 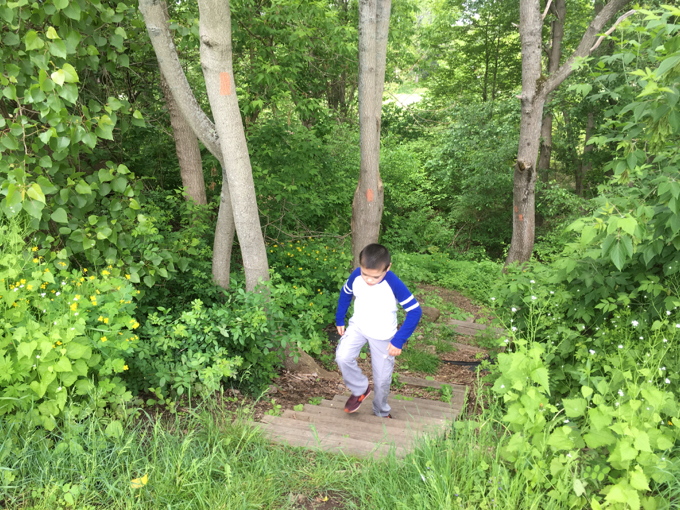 And a strip club. And an adult superstore. And… okay, I don’t want to get you too jazzed up right now. Suffice it to say, I love my Hockanum River Trails. 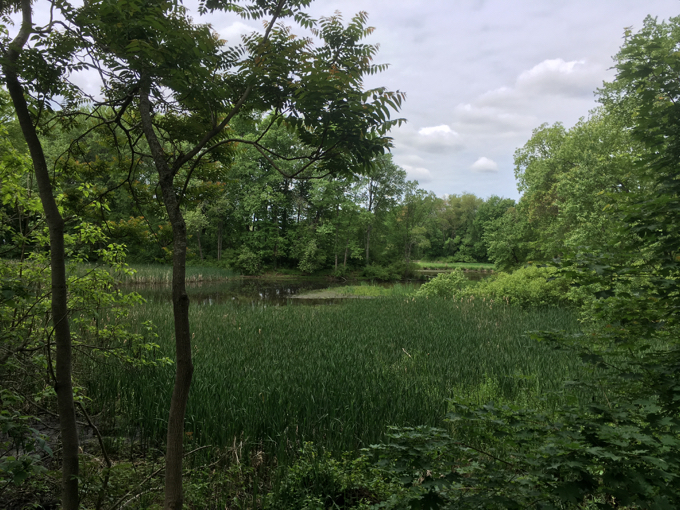 And now Calvin does too. So. Many. Questions! All about poop. My word, what goes on in the minds of little boys when it comes to poop! 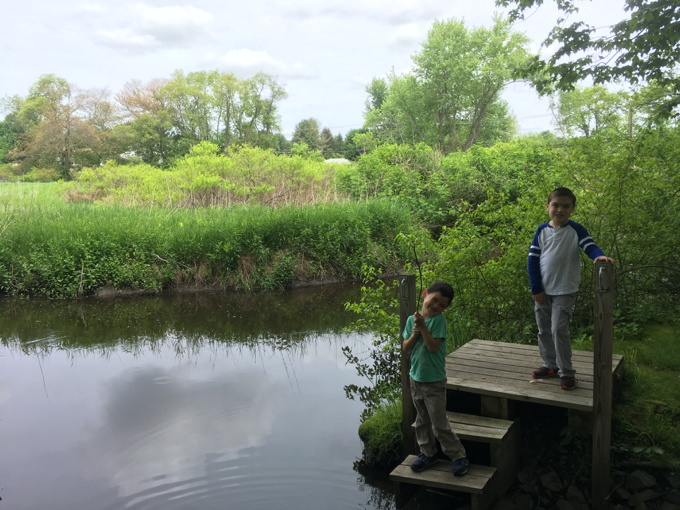 At the end of the Dart Hill North section there’s a hiker’s lot, a nice kiosk, and some signage about the river, the history of the area, and far more importantly, the sewage treatment plant right next to us. 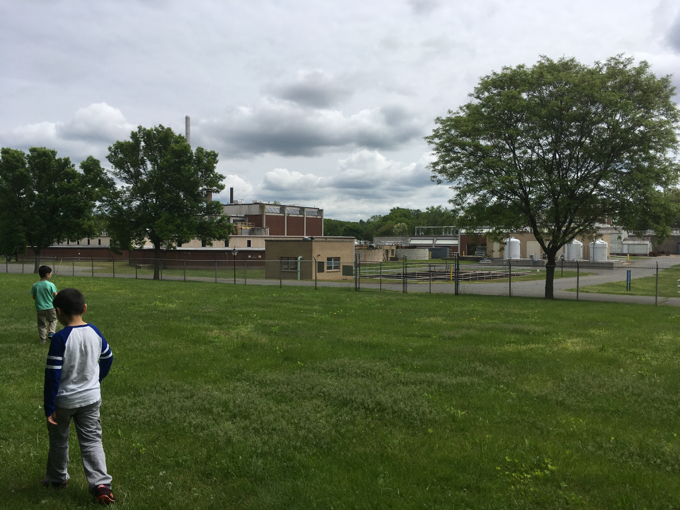 He had me read (most of) the signs here that helpfully explain how your poop is cleaned out of the water stream. He learned adult euphemisms for poop like “effluent.” He learned the life cycle of poop and what happens to it after he flushes the toilet. He came up with crazy fixes for the world like what if all the poop just went to one giant place in one giant pipe and we’d all have to be wary of the giant poop pipe and what if it broke and buried an entire town and boy wouldn’t that be stinky and…

I love him so much. 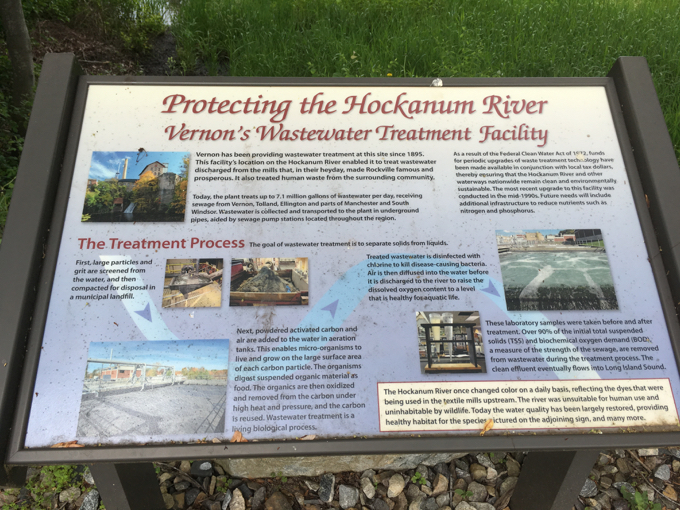 “Papa, read everything. I want to know everything about this.” 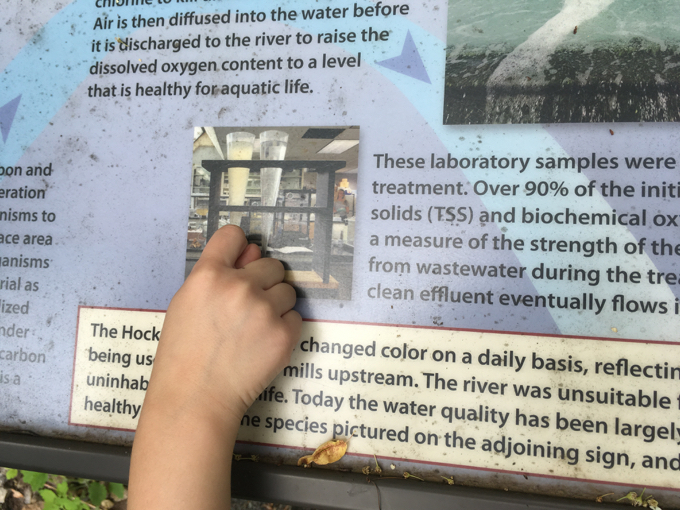 “Is this where the poop goes?” 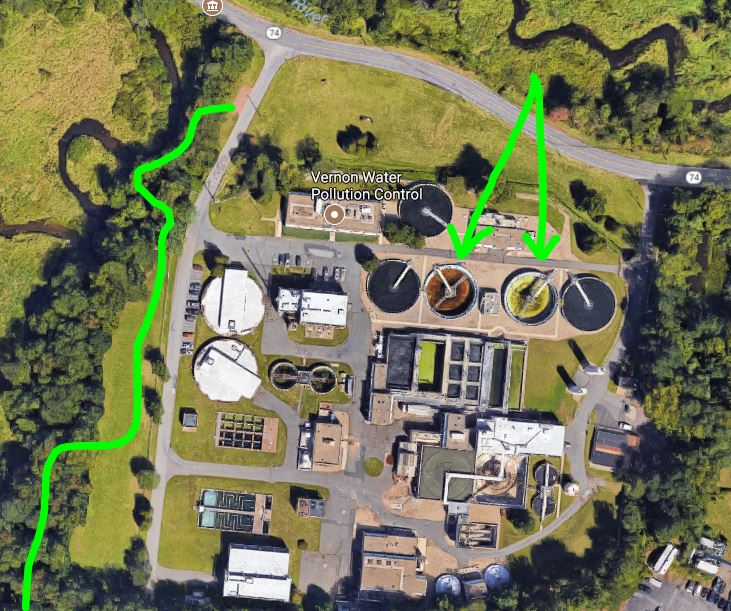 Trail on left, poop and vomit tanks on right. 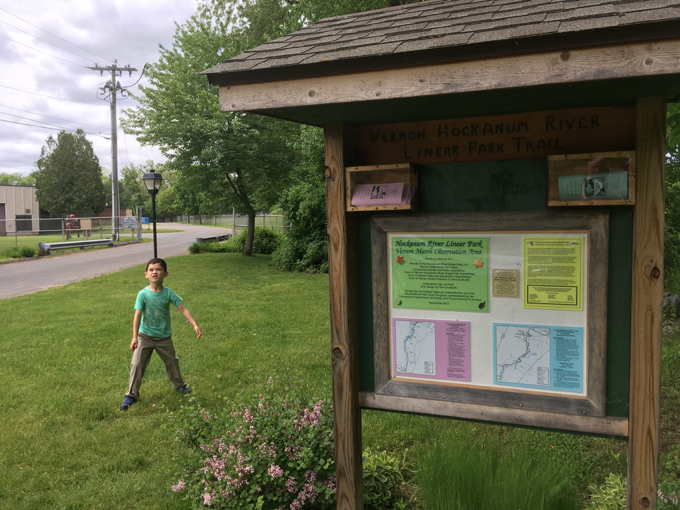 Continue on to Section 21, West Road 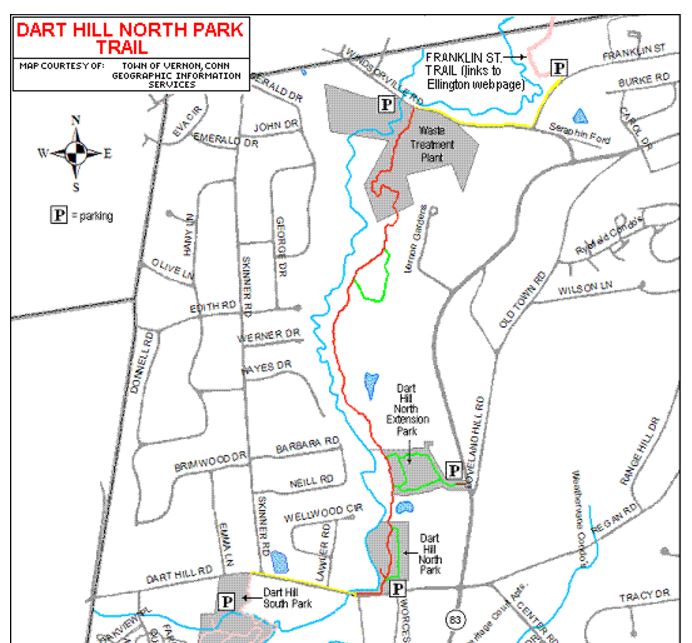