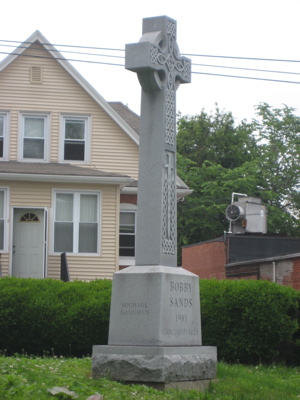 Hm. Um. Hm. You know how this is ultimately under the “curiosities” heading? I sure think this one fits, as it sure is curious. There, standing tall on a busy street in Hartford’s south end is a monument to terrorists. Oops, is that word going to get me into trouble? Did I say “trouble?” Poor word choice? What with the Troubles and all.

Let me be clear: I don’t support the English in Northern Ireland and I don’t support the IRA. I support rational discourse and yes, it IS possible. (See: Scotland in 2019 and Wales in 2032.) I would support Sinn FÃ©in if they were completely without English blood on their hands. Unfortunately, Sinn FÃ©in has aided and abetted violence and I’m sorry, bombing innocents in malls is not my cup of Earl Grey.

(Some of you may have no idea what I’m talking about and please, don’t think for one second that I am any sort of authority on the matter of Northern Ireland. Eh, you’ve probably stopped reading by now.)

Some people would say that this memorial is paying homage to terrorists and others would say “martyrs” or heroes. I say above all else, it’s really weird that it’s in Hartford. It is the only such memorial in the entire country. Here’s what the memorial’s supporters say: 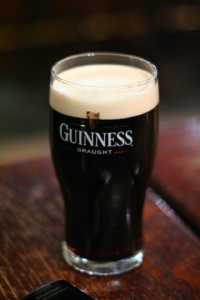 Ahhh… Just wanted to take my mind off this mess for a moment. Sorry.

“In 1981, ten Irish Republicans jailed in the H-Blocks of Long Kesh staged a hunger strike to win status as political prisoners. Margaret Thatcher’s government refused. Beginning with Bobby Sands, all ten died as a result of Britsh intransigence.

The Hunger Strikers Memorial on Maple Avenue in Hartford, Connecticut is the only monument of its kind in the United States. Established by the Hartford Unit of the Irish Northern Aid Committee and local Irish-Americans, the monument features a bed of green, white, and orange flowers that form the Irish flag. The Celtic Cross is surrounded by a half-circle of 32 small bushes representing the 32 counties of Ireland.

The cross has Bobby Sands’ name on the front. On the sides and back are the names of the other republican martyrs: Patsy O’Hara, Francis Hughes, Raymond McCreesh, Kieran Doherty, Kevin Lynch, Thomas McIlwee, Mickey Devine, Joe McDonnell and Martin Hurson. The memorial also includes Frank Stagg and Michael Gaughan who died on hunger strike in England.

It’s said that ex-prisoners in Northern Ireland carry pictures of this monument in their wallets.”

And then others feel this way about it:

Yeah, I’m not touching this one. In that video’s long-winded ranting description, the author notes, “Aren’t these all IRA Terrorists involved in bombings and killings? Why is there an official memorial, with a street or square, named after a terrorist in Connecticut?”

There are a billion nuances to this argument and I won’t pretend to understand. Yes, our founders were “terrorists” against England in 1777. Yes, England oppression in N. Ireland is unfair. 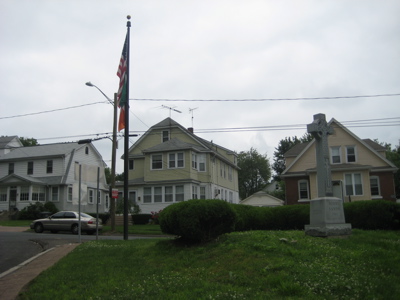 But no matter your opinion on the IRA, you must admit it’s strange we have a monument to 10 of them in Hartford plopped in “Bobby Sands circle.” No wonder Gerry Adams loves coming to Connecticut.