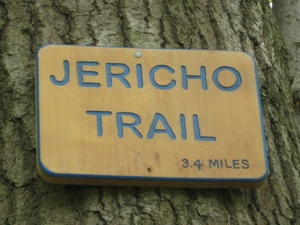 I don’t know how or why this trail got the name “Jericho,” but I’m sure it goes back a ways in our history… The area probably named by the Puritan Colonials. For as you know, the city of Jericho is described in the Hebrew Bible as the “City of Palm Trees.” Copious springs in and around Jericho have made it an attractive site for human habitation for thousands of years. It is known in Judeo-Christian tradition as the place of the Israelites’ return from bondage in Egypt, led by Joshua, the successor to Moses.

Moreover, and more fitting for CTMQ, Jericho is the lowest permanently inhabited site on earth (it’s located on the West Bank in Palestine.) It is also believed to be one of the oldest continuously inhabited cities of the world. When I do my WQ (World Quest), I guess I’ll visit. 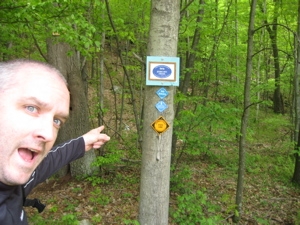 And while I’m there, and while I’m talking about Palestine (Israel) and hiking, do you all know about the Israel National Trail? It’s rather amazing; the trail is a footpath that winds its way from the Red Sea in the south to the Syrian/Lebanese border in the north. The trail crosses the Negev Desert, past three seas, alongside ancient ruins and through modern cities. (It does manage to avoid the West Bank.) Here’s a site with a cool video about the trail. It certainly sounds intriguing.

But for now, I’m in Watertown, Connnecticut – which is a far cry from the Promised Land. The Jericho is the last of the three Waterbury Area Trails and I knew it would be a good one before I even got going. The Jericho is certainly the most rugged of the Waterbury Area Trails and passes under and near a ton of ledge overhangs and towering cliffs. And it ends with a bang – at a Leatherman’s Cave, which is right below a great lookout point. Good stuff. 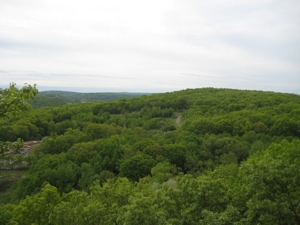 Once off the highway (Route 8) I first finished off the Whitestone-Jericho Connector Trail (because it’s there), went back to my car to drive a minute further up the road to find the Jericho trailhead. Now, normal people don’t need to do this at all. The parking area is larger and safer for the connector trail and the initial climb isn’t as steep on the Connector either. I’d actually recommend it, unless you’re a CT 400(825) completer like myself.

After parking and scampering up the hill on the Jericho Trail, I got settled into my pace and then got scared out of my wits. Some guy in full camo was hunting just west off the trail. Oh I saw him – he didn’t think I did, but I did. At least he was facing away from the trail and I purposely/accidentally made a racket as I passed behind him by pretending to talk on a cellphone. I figured one obnoxious behavior is better than getting shot.

It was a Monday and he was legally hunting (assuming he was going for turkey, as I think that’s the only legal game in mid-May you can shoot with a gun), so I can’t begrudge him. Especially since he didn’t shoot me. Anyway, when looking up hunting regs, I was surprised to find this – the fox/coyote hunting seasons are loooong and the limits are super high. No limits on coyotes and an almost year-round season.

Back to my hike. There is a decent view once atop the first hill and I was fortunate enough to enjoy a small bird I had never seen before: 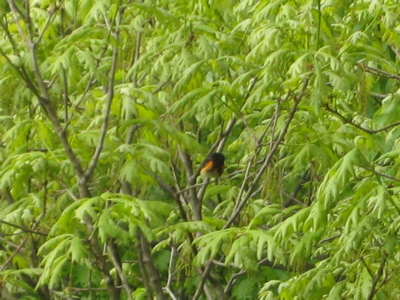 Any guesses? I’ll wait… It’s a male American Redstart. Pretty cool. The trail crosses a huge powerline cut and then the aforementioned Connector trail intersects. After a good ten minutes crossing a flat plateau, and a slightly confusing old road crossing, the trail gets “fun.” 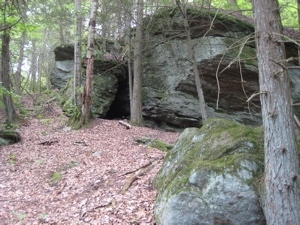 For the next mile or so, the Jericho dips and climbs in and out of several deep reentrants, all walled with high rock ledges and cliffs. I was a bit surprised by the ruggedness of the terrain – and a little annoyed that I’d have to hike the same hills back to my car.

Making the hike much easier, though, are the series of cool overhang “caves” along the way. There really is no way north through this area other than up and down the series of ravines, but the trailblazer knew what he or she was doing, as the trail does contour and “slab” as much as possible through some of the steeper areas. 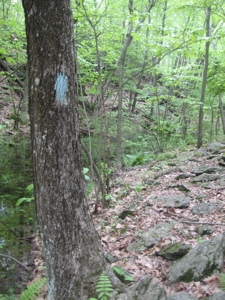 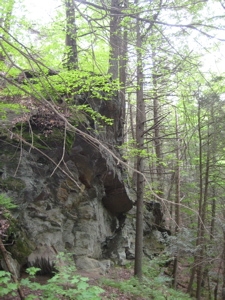 Atop one hill is a “seasonal” overlook which in May means I didn’t see anything. Anything on the horizon, that is. Because at my feet was a beautiful pink lady’s slipper. This is a rather fascinating orchid that is becoming more and more rare here in the northeast. I doubt this one survived much longer, as it was blooming right in the middle of the Jericho Trail. 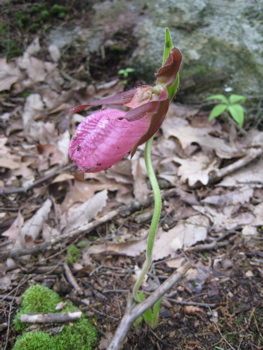 After a long descent (ugh, all I could think about was coming back up this in a little while), the trail skirts Jericho Brook and takes in an old dam. I always appreciate when our trails make the effort to pass near historic sites like this. After the dam, I walked along the brook through lush green ferns and mosses. Ahhhh. 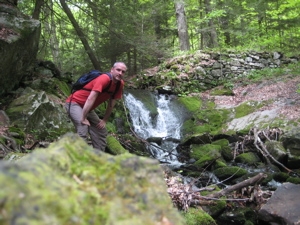 The Jericho is within the Mattatuck State Forest 99% of the time. A few tiny sections sneak out of the state land and boy, Connecticut will not be winning any subtlety points: 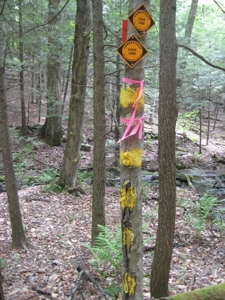 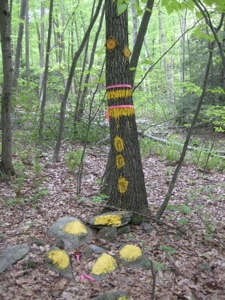 After crossing the brook, the trail joins some fairly well-maintained forest roads and then continues north past another rather large overhang cave. It was nice enough, but why stay at the Cave Motel 6 when the Cave Grand Hyatt is only a few minutes up the trail? 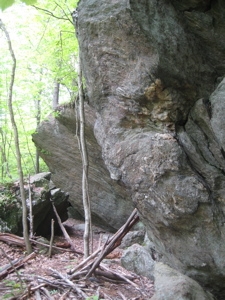 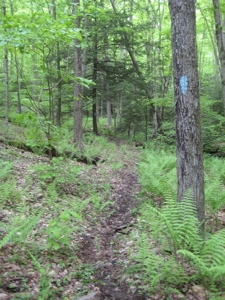 After a short walk through some laurel and a short little ascent, the Jericho Trail abruptly ends when it intersects with the Mattatuck Trail, which travels East to West for 36 broken up miles from Wolcott to Cornwall. However, my day wasn’t quite done yet. 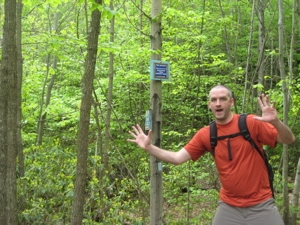 Jericho Trail: Done (now turn around and hike it again!)

The terminus of the Jericho happens to be placed at two really cool features both officially along the Mattatuck. Crane’s Lookout is up the rocks and is basically straight ahead of the trail intersection. Once on top, the views are beautiful; a 270-degree panorama north, east and south of the Naugatuck River Valley. 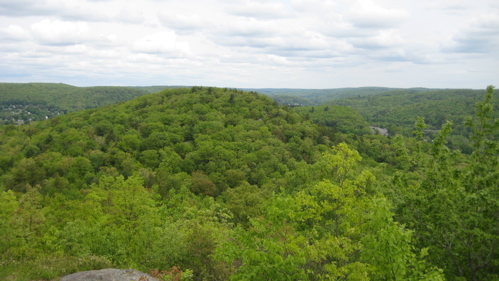 When I was up there, I noticed a kite string disappearing across the trees below me as far as I could see. So I started reeling it in. The kite itself was hung up in a far off tree, but it broke off and I kept pulling the string. I pulled and reeled, pulled and reeled. It must have taken me at least 10 minutes to get the whole string out of the trees and yes, my forearms were burning. Weak, I know.

I gathered my stuff up and made my way 50 feet down the Mattatuck Trail east to something I’ve been excited to see for a long time: The Leatherman’s Cave! Though still not a real cave, it is the more reasonable facsimile to a cave in Connecticut I’ve seen so far. It’s deep, it’s dark, it’s protected… and it’s historic. 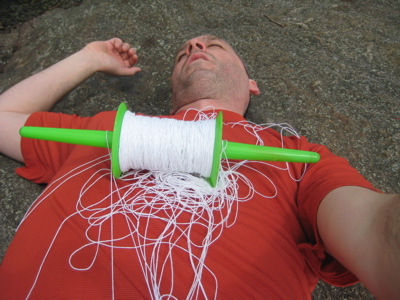 I won’t get into the whole Leatherman story now, as it certainly deserves its own CTMQ page (and really, it’s officially part of the Mattatuck Trail anyway), but I will say this: It’s really, really cool. For now, just a teaser: The rock shelter was one of the regular lodgings of the legendary “Leather Man”, who by most accounts spent more than 30 years from 1856 to 1889 as a vagrant, walking through the Connecticut and New York countryside, bouncing between the Hudson River and Connecticut River. After many years of tramping he settled into a clockwise loop, which totaled about 365 miles, averaging about 10 miles/day.

The Leatherman and his cave on CTMQ

The Leatherman was awesome. And, he’ll attract a whole new audience to CTMQ via Google searches! 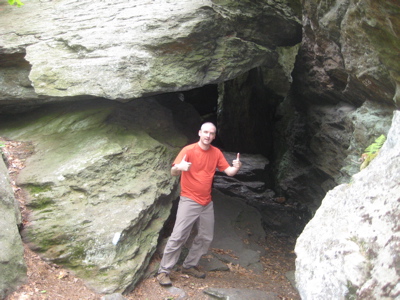 I retraced my steps past the dam, up and down the series of ravines, past the lesser cave formations, past teh lady’s slipper, past the hunter (who was no longer there) and down the hill to my car. To do this trail out and back is only about 7 miles total, and in my mind, it’s worth it. 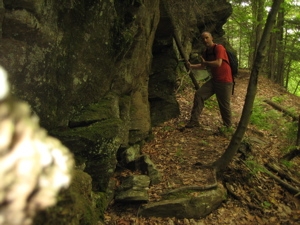 Of course, you can combine the Jericho with the Whitestone Cliffs Trail or the Mattatuck (east or west). Hike your own hike.