In late 2016, as this website turned 10 years old, I made the transformational decision to buckle down and begin “completing” towns. A year into the slight strategy pivot, I think it’s working pretty well.

Working well for me, anyway. It allows me to do several things all at once: Over time, I will be able to lightly edit old posts when I “hit” the towns in which their subjects reside. It gives me attainable goals rather than endless ones. It brings in new town-proud readers from wherever I’m exploring. And it gives me lists. 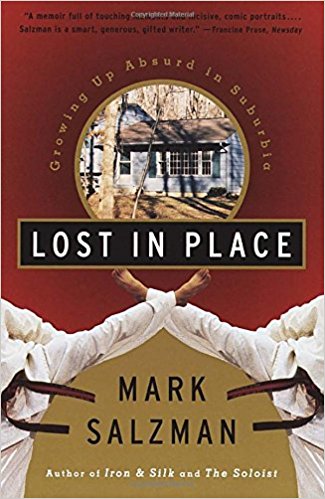 I love my lists. I’ve been creating lists since I was a child. I would create lists of stuff I’d already done simply to derive the twinges of joy I receive when crossing off list items.

As I was wrapping up my first five towns and plunging into my second set of four, the thought occurred to me that it would be cool to include books that are set in one of the towns I was focusing on.

(The idea first came to me as I was thinking about Patient H.M. which is about a lobotomy patient from Manchester. It’s a good book.)

I didn’t find much for Putnam or Suffield or South Windsor that interested me, but Mark Salzman’s Lost in Place: Growing up Absurd in Suburbia set my Amazon Prime finger into action.

Salzman is an accomplished author and his first book, Iron and Silk was made into a movie. He grew up in Ridgefield and this book encompasses his teen years there. If creating weird lists are “my thing,” then karate/kung fu was Salzman’s thing.

How Ridgefieldy is this book? Not too Ridgefieldy. In fact, much of his story takes place in grimy dojos in Norwalk and Danbury. Salzman’s dad was a stoic social worker and his mom was a bubbly musician. Not exactly the professions one associates with tony Ridgefield these days.

Salzman was a quirky kid; not really a bumbling nerd or budding sociopath – but most definitely a kid who did his own thing to the detriment of his social life. Oh, and much of the story explores his friendship with a budding sociopath as they studied karate under the tutelage of a bonafide sociopath.

That makes for some fun remembrances.

Salzman was the kid who threw himself 100% into pursuits. Not the pursuits that others pursued, but things like zen Buddhism, karate, concert cello, Chinese calligraphy, and ultimately, one assumes, writing.

And we as readers are fortunate for that last one at least. I am hypercritical of “funny memoirs.” They rarely ring true to my jaded ear, and they are almost never actually funny. When I find exceptions to the norm, I feel like I’ve won the lottery.

Lost in Place isn’t “hilarious” by any stretch. But it DOES ring true and it IS funny. I did “LOL” a few times, which I almost never do. But beyond that, Salzman’s story has some tender moments – as well as some delicately cynical takes on the human condition.

Lost, lonely, and scared in his dorm room on his first night at Yale…

I peered down out of my window and saw a whole pack of Hell’s Angels on their choppers sitting at the intersection waiting for the light to turn green. It took a moment to take it all in – a whole tribe of scowling rebels with leather outfits, studs all over the place, Nazi helmets, cobra tattoos, metal-tipped boots, throbbing, screaming, chrome-covered bombs between their legs, biker babes clinging to their backs, sitting at a completely empty intersection at two in the morning waiting obediently for the traffic light to change. I stopped crying and started laughing instead. Maybe I had made a fool of myself as a kid, and maybe I was lost without a compass now, but looking at those guys made me feel better. Maybe my dad was right to believe that we are all pathetically deceived about who we really are and why we really do what we do. It depressed my father to think this way, but on that first night at college the thought that all human beings might be pathetic came as a great relief to me because it got me off the hook. After the light turned green and the Hell’s Angels roared off to their next appointment with danger and anarchy…

I love this passage so much. I consider myself an observer of life and humans and their goofy general condition. For as long as I remember, I never understood kids, teens, adults who “just wanna be me, maaaaan” while adopting a strange, expensive, and rigorous wardrobe and pathos to fit in with some group of like-minded mopes.

Most readers focus on Salzman’s years of sadistic kung fu training under the thumb of an alcoholic coke-head sensei. Not me. I more enjoyed his relationship with his parents – loving but distant. They allowed him to be unique, were usually cool with the “I told you so’s,” but still shaped and molded young Mark more than he realized at the time.

No, this book isn’t really about Ridgefield; it could just as easily have taken place in the Wilmington, Delaware suburbs of my teen years. Or anywhere, really.

I could make a list of towns in Connecticut, and – Okay, never mind.

I enjoyed the book.

Easter Egg: As usual, the first person who reads this sentence who would like this book, send me an email (click on the envelope on this page) saying so and it’s yours. The book has been claimed, thank you!