As I was happily going along eating up delicious ice cream listed as “the best” by Jane and Michael Stern in their Roadfood book, I kept getting comments on Twitter and this site as well as emails alerting me to some place called Rich Farm in Oxford. I made a mental note of it but didn’t really think much about it until I was nearing the end of the Roadfood list and decided to expand my butterfat horizons and try to track down all the homemade ice cream joints in the state. 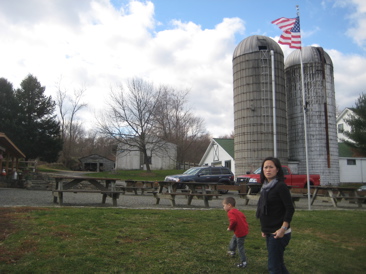 And so it was, on a not-too-chilly November day on our way back from visiting family in Delaware for Thanksgiving, I ventured off of Route 8 and pulled into the lot at Rich Farm. (I should note that although no one loves ice cream more than my beautiful wife, she was pregnant, not just ice cream stuffed.) My first clue to the greatness of Rich Farm was that there was a small line formed for the ice cream. On November 27th. In Oxford for goodness sake. 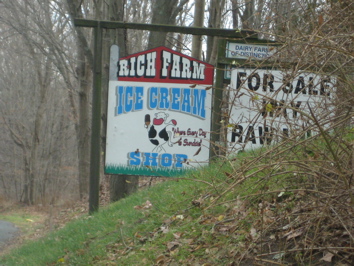 My second clue to the greatness of Rich Farm was their menu and prices. Holy cow, this is almost certainly one of the cheapest ice cream places in the state. Can you believe these prices? Heck, it’s almost cheaper for us to drive all the way out to Oxford for a single scoop and home again than to go to the places nearer my home, even when considering gas prices. 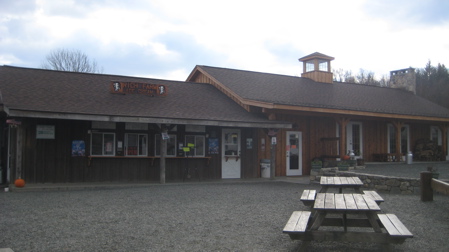 The most expensive cone/cup is $4.85! That’s what a small costs elsewhere. The cups you see in the pictures are the smalls – for $2.85. Fantastic.

Yes, the serving sizes were comparable to all the other homey farmstand ice cream places as well; just half the price. “Okay,” said my cynical brain, “I’m sure they’re cheaping out on some ingredients here.” So we ordered our ice creams and took a seat in the impeccably clean, curiously large and actually rather lovely dining area. 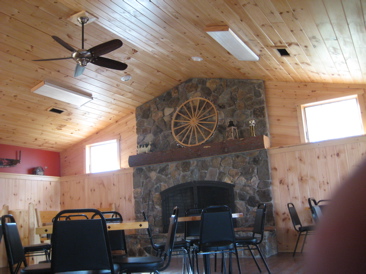 What the? I know they close this room in the summer, but look at this place! Real tables and a real fireplace! At this point, even before having a taste, I was enamored with Rich Farm. Let me gather myself and let them tell you a bit more about themselves:

Rich Farm Ice Cream opened for business on July 3, 1994 by David and Dawn Rich on what is known as Ajello’s Farm. The dairy farm was originated five generations ago by Dave’s great grandfather, Raffaele Ajello, on Great Hill in Seymour, Connecticut. In 1950, Ralph’s son Thomas purchased 100 acres in Oxford and moved his farm here. Later, in the early ’70’s, grandsons Don and Dave Rich took over the dairy business and continue to operate the farm today. The ice cream shop was opened by Dave and his wife Dawn, along with their children, to enhance their already existing dairy farm. All of the ice cream is made daily on the farm, using only the highest quality ingredients. Our pledge to you is to make the very best ice cream, using only the freshest cream with absolutely no artificial growth hormones. 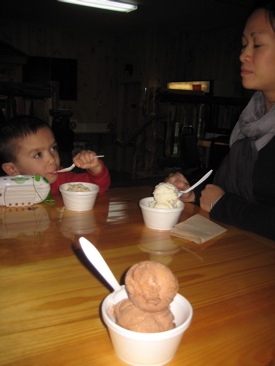 Let’s have a taste. Oops – I have to offer up my one lament that is NOT unique to Rich Farm. So many of our wonderful homemade ice cream joints provide the flimsiest nearly useless little plastic spoons with which to scoop their thick ice cream. Folks, it just doesn’t work – especially for little kids. For a place like Rich Farm, which is charging dirt cheap 1987 prices, I say bump everything up 25 or 50 cents and provide heartier spoons. Trust me, no one will complain.

Okay, NOW let’s have a taste. If I remember correctly, I went with the chocolate peanut butter swirl and I’m sure Hoang had some sort of toasted almond type concoction while Damian had strawberry or vanilla or some boring flavor. My WORD this stuff is rich. How is it that the owners’ last name is Rich and they make the richest ice cream in the world but you don’t need to be rich to enjoy it? Crazy. 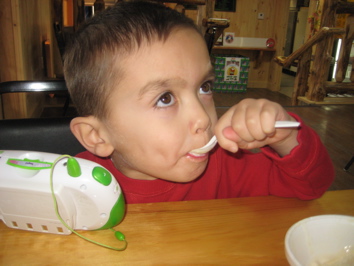 This is seriously good stuff. And I think they make their own whipped cream here too and will top you off with it for a few extra cents. And I just noticed a “flavor of the day” flavor is Twix – Chocolate ice cream with Twix bars & caramel swirl – and yeah, I just decided this place is a definite detour anytime we’re in, oh I don’t know, the western half of the state.

When one considers the ice cream, the extras, the flavors, the prices and the setting, I cannot believe Rich Farm isn’t on the Stern’s list. Rich Farm is definitely one of the best in the state.