[Note: The pictures are fuzzy because I pulled them off my old blog and had to enlarge them. Sorry.] 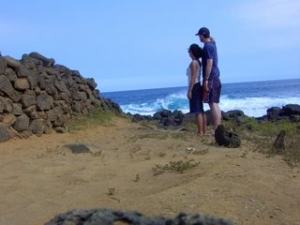 If you consider yourself a “Parrot Head” and you’ve spent too much time, “Nibblin’ on sponge cake, watchin’ the sun bake… wasted away again in Margaritaville,” well, then, not only are you not really my type, you probably also think that the southern tip of Key West, Florida is the southernmost point in the United States. You’d be wrong of course, for as I’ve learned, the southern tip of Hawaii is indeed the furthest south one can get in the United States. (In fact, a Google search for, “Southernmost point of US” yields tons of Key West hits and only a smattering of correct Ka Lae ones. As an oh-so interesting FYI, the northern and westernmost points are in Alaska, to no one’s surprise. Oddly, Cape Wrangell on Attu Island in Alaska is not only the westernmost point, but also, technically speaking, the easternmost point as well, because that is where the hemispheres are divided at 180 degrees longitude. However, West Quoddy Head, Maine always gets the credit for being the easternmost point – and yes, it’s called, “West” Quoddy Head. This whole, “-most” business is odd so I think I’ll stick to highpoints outside of Connectcut.) 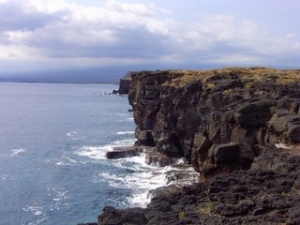 The southernmost point is called Ka Lae, which translates to, “South Cape,” on the Big Island and it takes a small feat of driving to get there. Legend has it that this was where the ancient Polynesians made their first landfall in Hawaii. I wasn’t even planning on going there, seeing as though we were newlyweds and driving down desolate dead-end roads-to-nowhere isn’t something most new brides dream of doing while they are in paradise. However, after poking around the western edge of Hawaii Volcanoes National Park and not really finding too much of interest (petroglyphs really aren’t our thing, and we had a couple days to explore the active volcanic action later on), navigator Hoang asked, “Did you know we’re driving near the southernmost point in the US?” 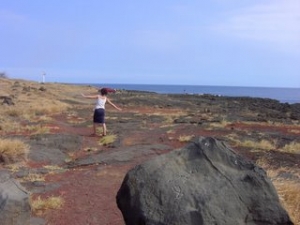 “Yes,” I responded, “But do you really want to bother with that, or would you rather go back to the resort, swim with the sea turtles, drink a lazy mai tai or three, and watch another perfect sunset instead?”

Hoang answered, “C’mon, let’s do it. I would love to stand on the southernmost point of these 50 United States, the greatest country in the world. This is a dream of mine.”

And so with that, I veered south off of Highway 11 across one of the oddest landscapes I have ever seen. Oddly ugly and beautiful at the same time, we passed shanty settlements in Puueo as well as several sprawling estates of reclusive owners along the way. As the road deteriorated further, it took us through a gigantic wind farm at which about one hundred whirring monoliths spun forever noisily, creaking and lurching according to the whims of the sky. I’d imagine a moonless night on this road would be pretty freaky, to say the least. 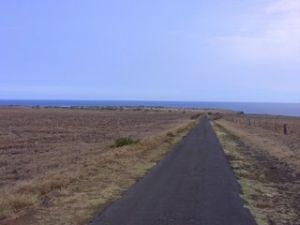 Every five miles or so, the road became less and less of a road, and more of a rutted, pot-holed, jeep trail. Once we passed the last homestead, my speed reduced to about 10mph and each time a truck was coming north (I think we were the only sedan we saw on that road), I would have to find a place to pull over to allow the other driver to pass. Owing to our location, each passing driver would flash the “Hang loose” hand sign (which actually symbolizes the Big Island itself), which was a welcome change from the hand sign I’m used to back east.

The day itself was, of course, lovely with blue skies and a warm breeze. However, this was tempered a bit by the odd feeling that we were driving to a place that a) not many people ever go to and surely wouldn’t be at, b) our rental car could easily be destroyed in a crevasse of some sort, and c) it was a 20+ mile dead end with no civilization along the way or at the end. 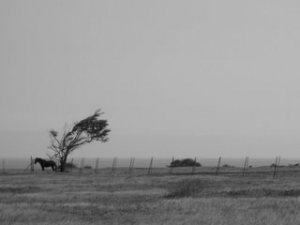 Once we arrived at the end of the road, we followed some signs to a sand parking lot and a shack. “If we die here, no one would know for quite a while,” I quipped. I parked the car and we warily entered the “visitor’s center,” which was a tin roofed shack with no doors. Upon entering, we were surprised to see a teenage kid, seemingly high on something, staring at a tattered old paperback, though not appearing to actually be reading it. The truly strange thing was that he didn’t seem to care about the fact that he had visitors, only that we were apparently parked in an empty $2.00 lot. The Ka Lae “Museum” contained absolutely nothing of interest. I mean, nothing; A coconut shell, a few rocks, a couple old pictures and some stoner kid hitting us up for two bucks. He did 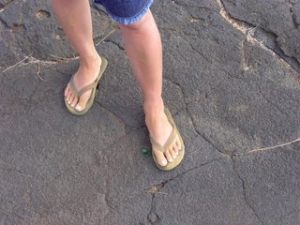 tell us that we had passed by the turnoff to the actual south point a mile or so back up the road, so I thanked him and we trundled back to the car.

It turned out that the lot was for access to a trail down some dangerous cliffs to the Pacific Ocean. The allure, apparently, is that the beach down below is a rare green sand beach. Certain volcanic rocks, when eroded over millennia, take on a green hue in the sunlight. We had already been on white and black sand beaches, so we skipped out on the green – though we got a taste of it at the south point anyway. (Seen here, right.)

We found the way to the true south point easily enough and were surprised at the amount of people there. Several unemployed fisherman were sitting around, 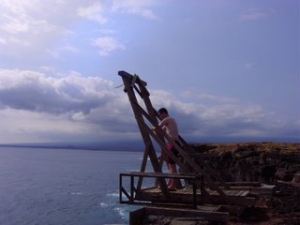 smoking, drinking, and cursing their small catches. A few insane locals were entertaining themselves by jumping off wooden platforms a couple hundred feet into the boiling surf below. Yes, there were actually guys jumping off the cliffs in the picture you see below – but I think the worst part would be the vertical ladder climb back up. (The wooden platforms they were leaping from were actually boat launch pulley things; apparently it protected the canoes to do it this way rather than walking the half-mile to where the sea met the land gradually). 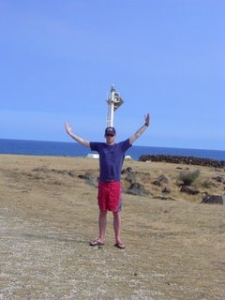 After checking out the cliffs and the scary, unfenced deep holes to certain doom, sunken lava tubes, and crevasses around the south point, we set off the half mile or so to the tip of the island; The South Point proper. It certainly felt as though we were at the “something-most” point of something, because looking back towards the car was all ranch land and trees, whereas looking southward, the land just stops abruptly and drops off to the ocean as far as one could see. The trail to the south point, though, descends to meet the sea at a rather nondescript spot. It wasn’t like our highpoints where you know you are actually “on top” of something. But it was pretty cool anyway. The coolest part, I think, was the (free!) green sand. As you can see above, my lovely new wife appeared gangrenous after the short walk. 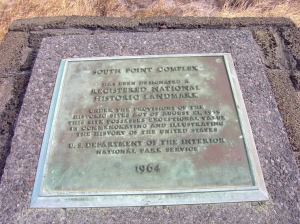 And that was that. Turns out, it wasn’t as silly as I thought it would be, and in many ways, it was definitely cooler than some of our highpoints. There was even a permanent sign marking the spot. After this little detour, Hoang and I decided to continue our honeymooning ways, as only honeymooners know how to do. As we headed north towards our hotel in Kona, I don’t know if it was the heat, the sun, or the unbridled excitement of having dipped our green toes in the Pacific at the southernmost point of the US, but we were feeling a little frisky, to say the least. And so, with dreams of highpointing Mauna Kea two days hence, far be it from us not to follow directions printed on big signs along the highway: 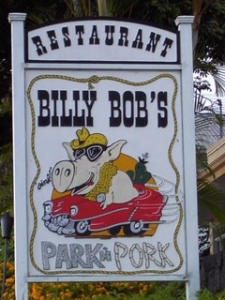 Ok, if Billy Bob says so!

Sadly, an era has passed, but not without our marking it’s (near) end. 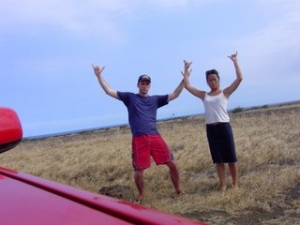