We actually found this house years ago – back when it was part of the Freedom Trail before disappearing from it, only to reappear on the Underground Railroad Trail in 2011. I won’t bore you with the amazing story of how I (rather quickly) figured out what date we drove by it in order to find the right CD with the picture on it. I did amaze myself, actually.

Asa Seymour Curtis (1813-1895) was recognized as a prominent figure in the Stratford community. He was a farmer who was active in temperance and abolition movements as a young man and it was known that his home was a station on the Underground Railroad. His obituary in the Bridgeport Standard on March 19, 1895 notes that, “… a number of runaway slaves it is said found a safe refuge with him and were passed on their way to Canada. 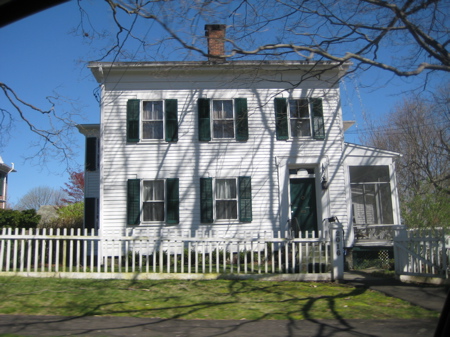 For once, I searched for more online about this guy (in an attempt to find out why this stop on the Underground Railroad trail disappeared and reappeared. What I found was a pretty good story about him from Stratford’s Christ Episcopal Church history page.

As he headed home from a meeting, rotten fruit and epithets flew out of the dark at Christ Church organist Asa Seymour Curtis. Hurriedly he ducked under a pile of lumber until the crowd passed in the night. It wasn’t a convenient time to be against slavery in Stratford. Abolitionists, though vocal, were a minority. Merchants worried that the anti-slavery movement would further sour relations between North and South and consequently hurt trade between the two regions. Slavery served as a lens through which to view the issues dividing the nation.

Stratford’s Anti-Slavery Society formed in 1837 with our rector, Rev. George Shepherd, serving as its first president, and Curtis as the secretary. Though Rev. Shepherd left Christ Church two years later, Curtis remained at Christ Church as a man stubbornly committed to his views. According to family legend, his home served as a station on the Underground Railroad.

Recent research has revealed that 200+ slaves, and afro-american free men and women were baptized at Christ Episcopal Church in Stratford during this period. Their baptismal records appear in our church records.

Between 1850 and 1860 the failure of political compromise heightened the separation between North and South. When Lincoln, a candidate known to oppose slavery, won the presidency, secession spread throughout the South. The War of the Rebellion, as it was called at the time, had begun. Though no longer a young man, Asa Seymour Curtis volunteered, and spent the war at a fort in Baltimore. Since he was a musician, he joined the fife corps.

Early support for the war soon faded. By July, 1862, Stratford struggled to meet its quota of soldiers. A popular rally was held near Christ Church with the Senior Warden, Lewis Russell, as one of its sponsors. The town offered a $50 bounty (soon to be increased to $150) to each volunteer. Even this effort failed, and a draft was instituted a year later. After four blood-soaked years, slavery was finished and the union preserved.

In an effort to reach out during the post war years, Christ Church regularly donated to the Freedman’s Aid Society as well as to the destitute clergy in the South.

His obituary was awesome.

For more on the creepy case of Jennie Cramer, read this old article from a 1901 edition of the Bridgeport Herald.