Farmington does this really great thing – beyond just preserving lots of greenspace. They seem to like to keep historic remnants of days gone by. You know, like the creepy old zoo off of route 6. And here, at Suburban Park. 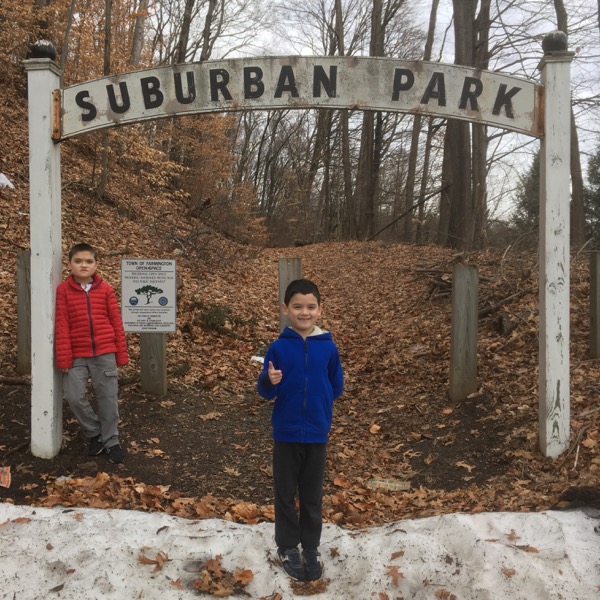 I forced the boys out of another day of hibernation to get some miles in their legs. I had tried to walk a couple of other properties before winding up here, in “downtown” Unionville, but they didn’t work out for differing reasons. 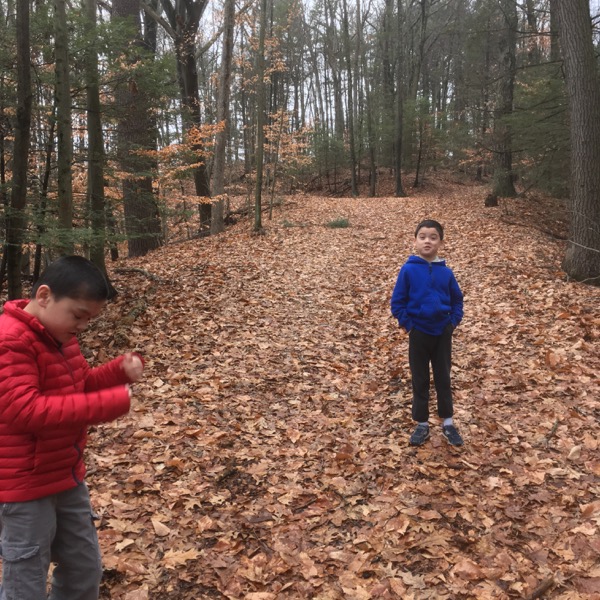 No matter, Suburban Park offers a couple miles of fun and interesting traipsing. Though I’ll admit, trying to explain that we were walking through an abandoned amusement park was more difficult than I’d envisioned. 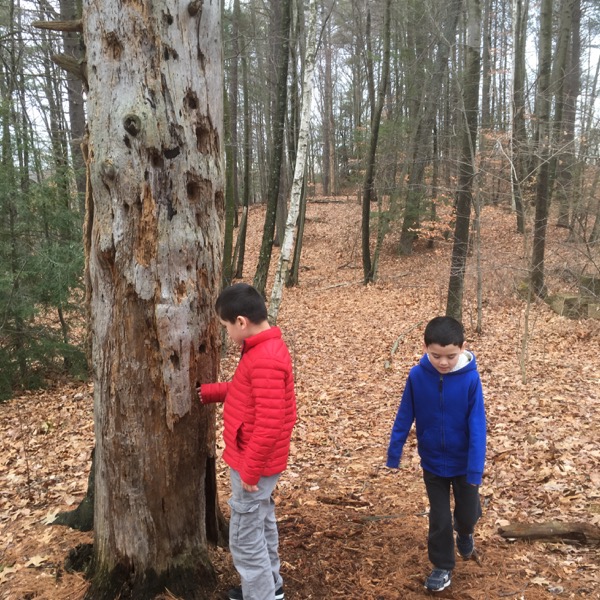 It simply makes no sense to little kids. Hopefully, it makes more sense to you. Unless you’re a little kid reading this… and if that’s the case, hats off to you! You are the coolest kid in your school. Feel free to tell your teacher that tomorrow. 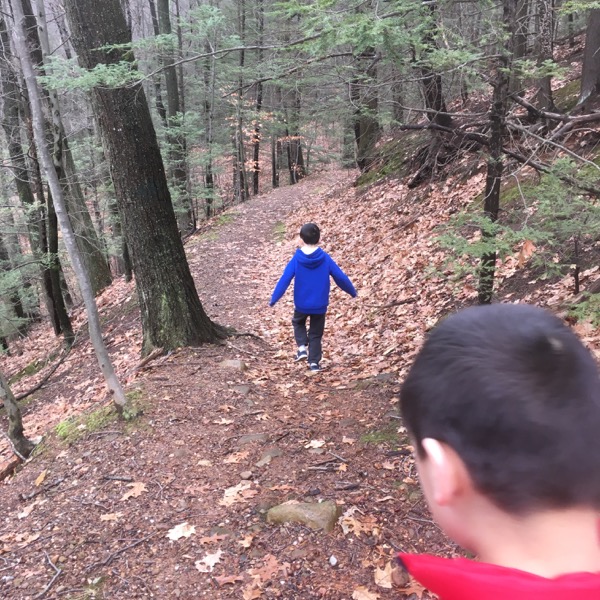 The town of Farmington explains this place pretty well:

The 1.3 mile loop trail found on the map has a remarkable number of ups and downs caused by the last glacier, when it receded 12,000 years ago. As the climate warmed big blocks of ice calved off the glacier and became buried in the glacial till washed down from the melting glacier. When the ice blocks melted, they formed round depressions, known as kettle holes. There are 5 well formed kettle holes here in the park. Can you find all 5?

If I may… walking around Suburban Park to look for five kettle holes would make a really boring scavenger hunt. A few are as obvious as the sky, but really, they are just large depressions. And the “remarkable number of ups and downs” shouldn’t scare you off. The tiny hills here present no challenges. 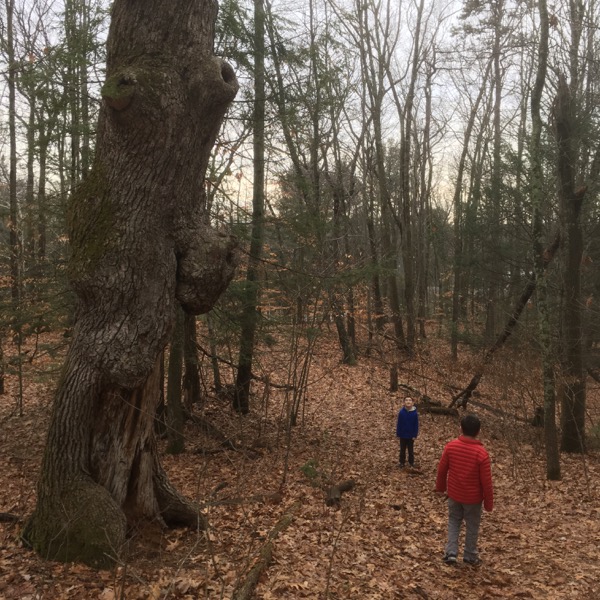 Unionville was the industrial section of Farmington and received electricity by the end of the 1800?s. By 1894, the trolley was extended to Unionville. Suburban Park was created, becoming a recreation destination for visitors from Farmington, West Hartford, and Hartford. It was active between 1895-1905. Attractions included a large electrified fountain, a dance pavilion, restaurants, and a pond with small boats. A number of the foundations are located along the trails. The electrified fountain is a highlight because it is also in one of the largest kettle holes.

Yeah, you see? They’re tough to miss. I tried to explain to my boys that back in the day, simply seeing something electric was… electric! That people rode a rickety trolley out from the “big city” of Hartford to dance up on this little hill and to see an electric fountain was it, man. I didn’t get very far with that. 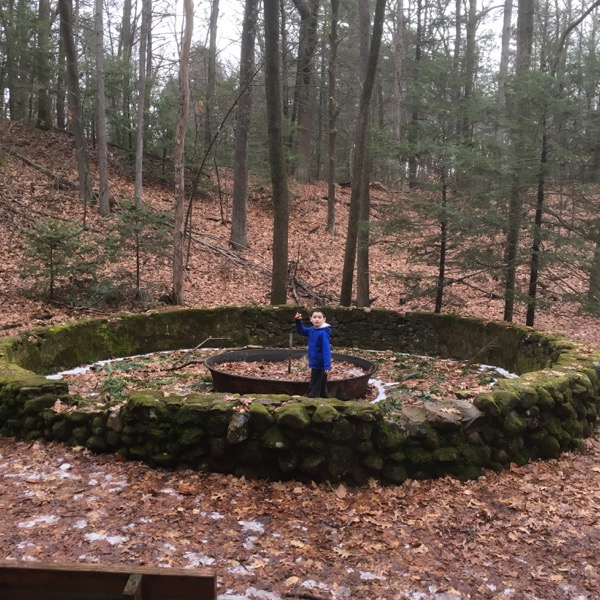 The foundation of the dance pavilion is another highlight, especially late Fall to early Spring, when views of Unionville below are clear.

Here is the foundation of the dance pavilion: 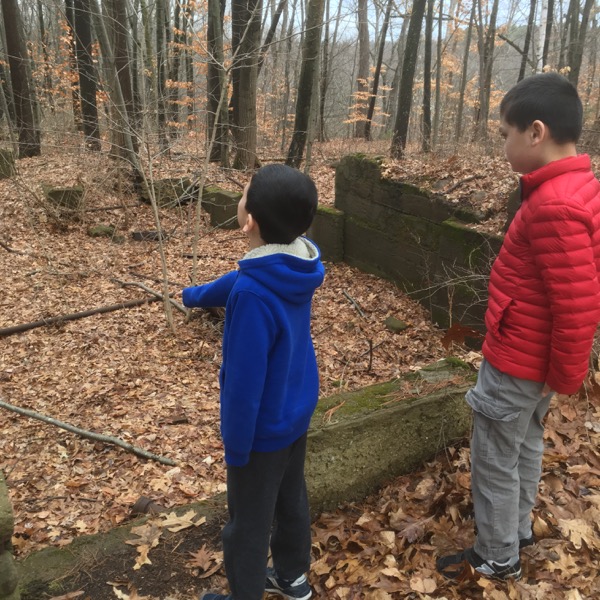 Calvin was full of questions – Where did the building go, how did it “disappear,” how did they get up here with no road, why did they build it up on a hill, were the trees growing inside it there back then and did people bump into the trees…. good questions, all.

Here is the “view of Unionville below”: 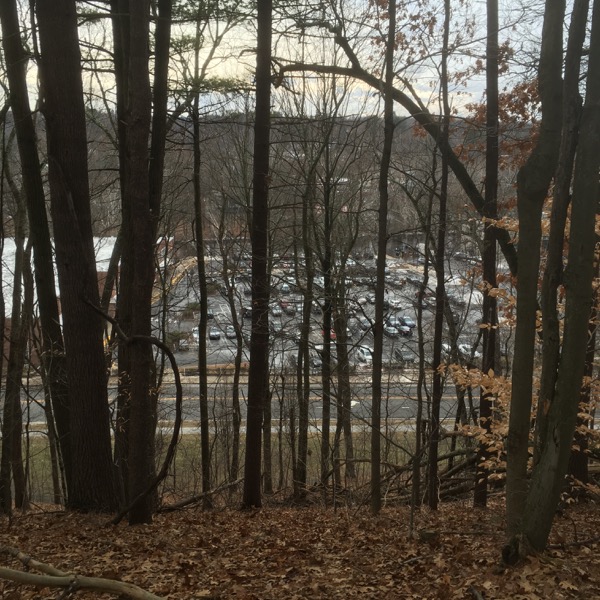 That’s a nice Stop & Shop. And its parking lot. Let’s move on.

We walked the perimeter of the park for the most part, focusing on walking near the former structures. As I said, the former dance pavilion in nothing more than a crumbled foundation.

There are benches throughout the park, which Calvin rather enjoyed for some weird reason. 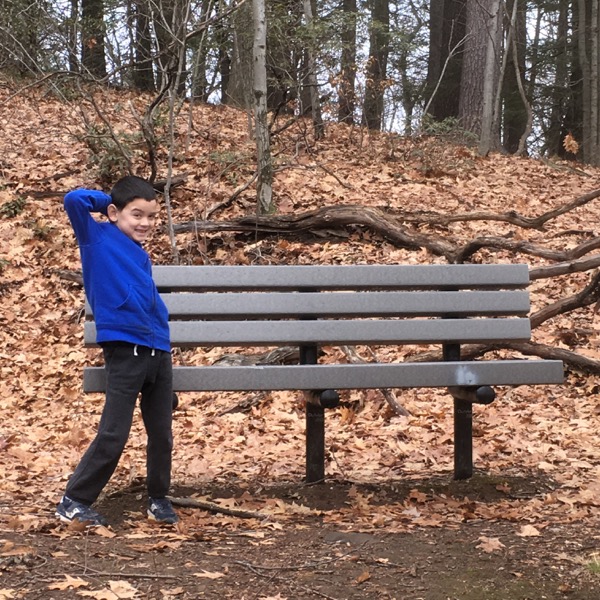 We found the former restaurant and… it is again, just a foundation. It’s tough to imagine these woods as a bustling social stomping ground, but it must have been cool. The natural topography of the park – those kettle holes and kame terraces! – were certainly a nice and unique touch. 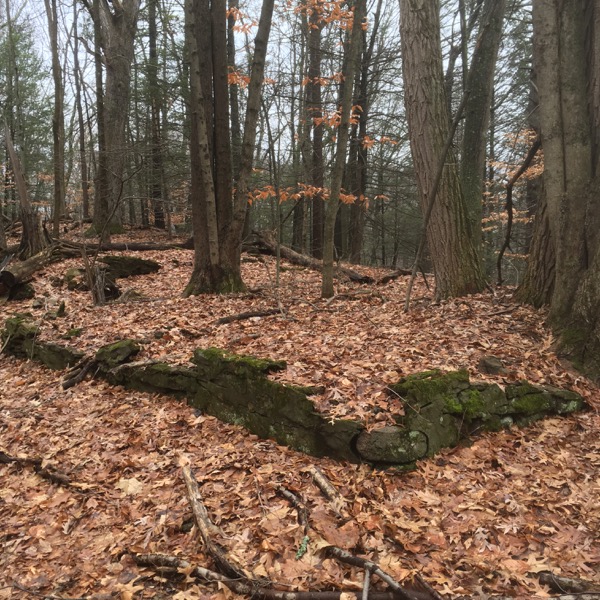 Such natural parks don’t really exist anymore, as any developer would simple level the place out.

And such parks these days would have no need for a cave to refrigerate the beer and stuff. 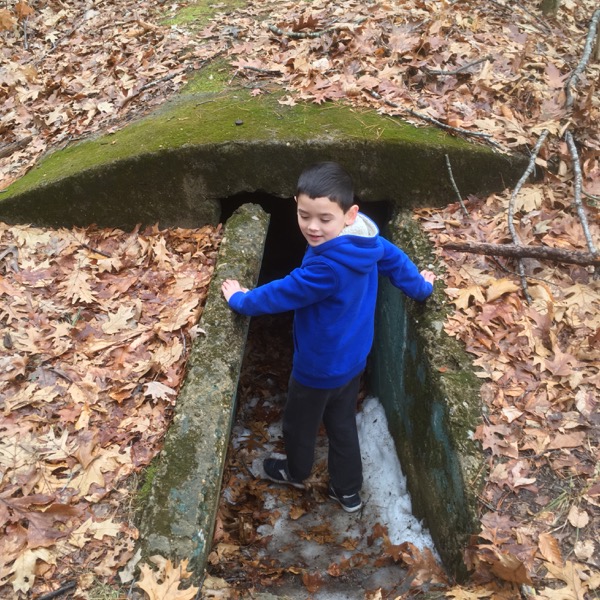 The highlight of the day, for all three of us, is the Underground cold storage cellar. Thankfully, it still exists and young explorers can walk right in.

Calvin went first and Damian walked on top. There we were, innocently taking in the scene and then… 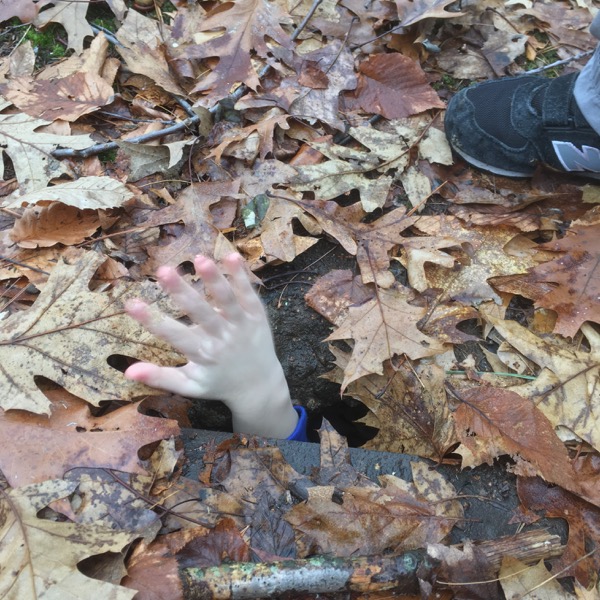 I’m not sure Damian’s ever seen anything so funny in his life. There’s a hole: 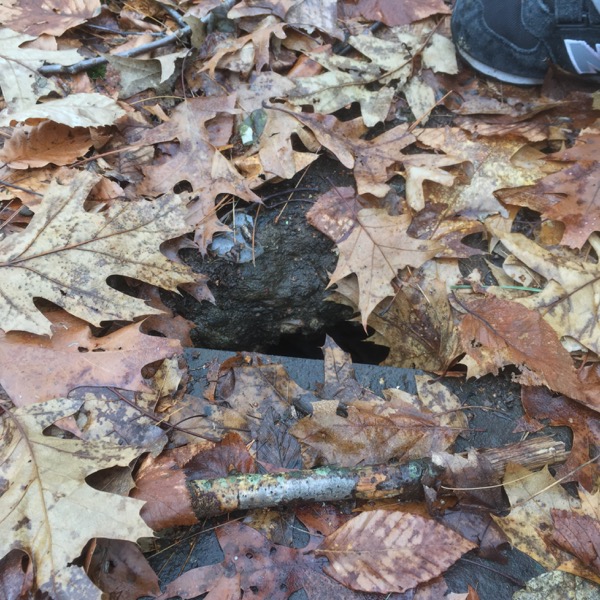 And then the brothers bonded. 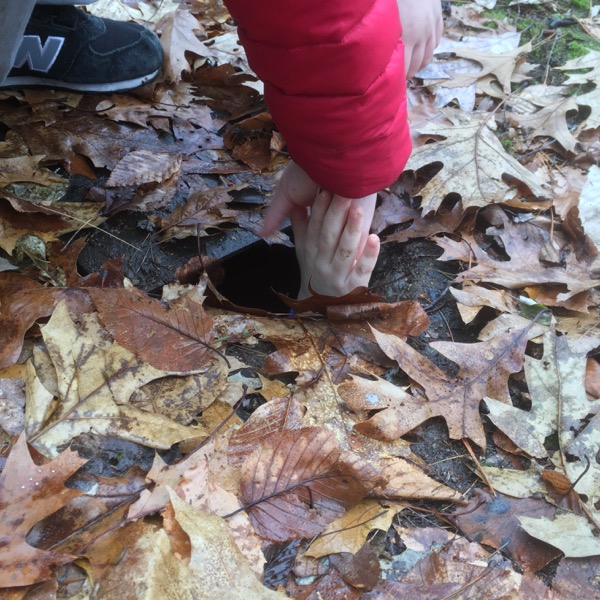 It was beautiful. And with that, little forgotten Suburban Park in the Unionville section of Farmington became one of their favorite hikes ever.

Damian even ventured underground; something I wasn’t sure he’d do: 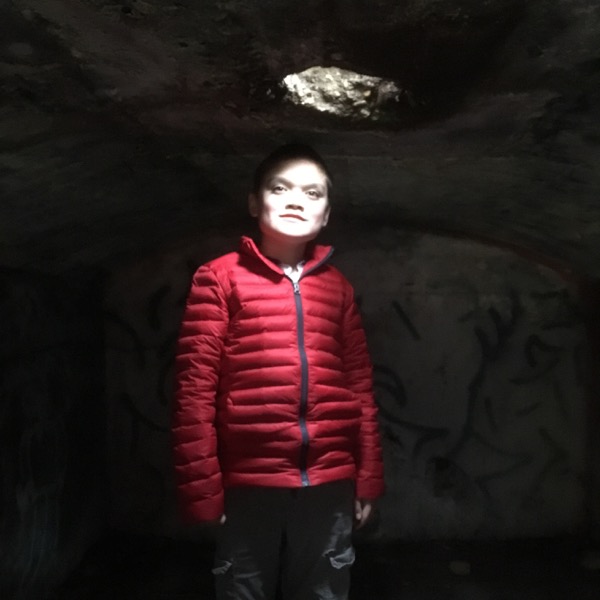 And all was well.

We then walked down to the former “electric fountain” and both boys thought the benches were absurdly high. 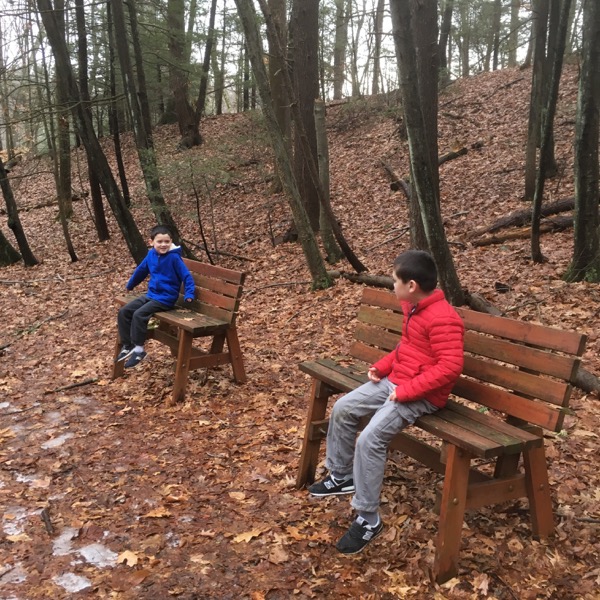 Which they were. This, too, was quite hilarious.

When Suburban Park was an amusement park, there were fewer trees and more grassy areas as well as a swimming lake, punting pond, dance pavilion, restaurants and a colorful electrified fountain. After the Park closed in 1905, the land and its buildings changed hands many times. In 1999, a local developer sold the land to the town for $1.56 million, after a grassroots campaign by town residents prevented him from mining the area for sand and gravel and putting in fifty houses. The Town of Farmington plans to leave Suburban Park as it is, a natural, untouched open space, for passive recreation use only. 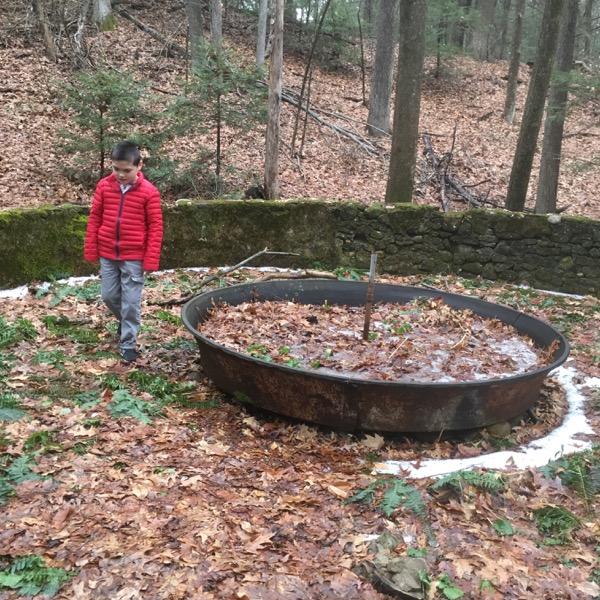 And now little boys can explore cellars and foundations and ask all the right questions and enjoy a bit of woodland in a developed town in Connecticut.

Thank you, Farmington. Thank you very much. 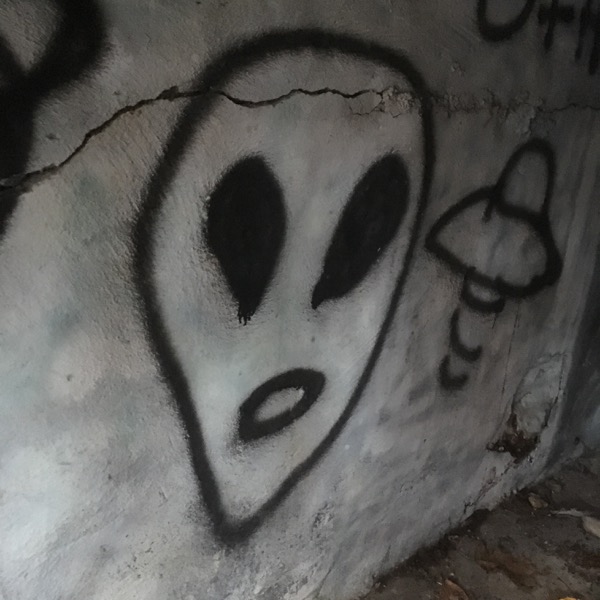