Where are They? Down Thayer!
Thayer Brook Cascades, Kent
May 2012

These falls (cascades, officially) are included in the (2013) Connecticut Waterfalls guidebook, so I’m adding this page a year after visiting. And since I’m lazy, I’m not going to go find the CD that contains the original pictures to give you the lovely giant waterfall picture you so richly deserve. Since I didn’t know this cascade would make a guidebook in the future, I didn’t spend any time taking a proper picture, so this is all I’ve got. 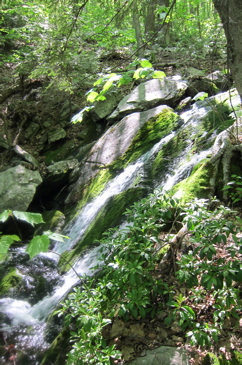 I kind of love that Dunn and Butler include these falls in their book, if only because they require a decent amount of effort to enjoy. They shouldn’t all be easy, should they? The guide notes, and I sort of chuckle at, “it makes sense to visit this small cascade only if you are already hiking on the Appalachian Trail.”

But what about all those waterfall list completists out there? Of course, the only sane way to reach these cascades is via the AT as the only alternative would be a horrible death-march up the mountain from Route 341, which would be impossibly stupid.

Aha! But merely hiking the AT won’t get you to the nice falls. For you have to take a fairly distinct but unmarked side trail a (very) short way downstream. (The trail itself crosses Thayer Brook at some smaller cascades, but if you’re up there already, you’d be a fool not to take in the nicer 6-foot falls.)

I suspect these cascades are somewhat seasonal in that they are probably reduced to a trickly in August and are rather powerful with snow melt. I doubt they completely dry up, but who knows.

This section of the AT is beautiful and fairly rugged. The Thayer Brook crossing is not far from the nothermost NY border crossing and is most easily accessed hiking south from the Route 341-AT intersection. You have to ascend Mt. Algo, which is no picnic but it’s better than it used to be. No longer do you have to ascend what was known as “The Grand Staircase,” which trust me, is a good thing. Up and over Algo and down into the Thayer Brook Ravine is about 1.5 miles one way. 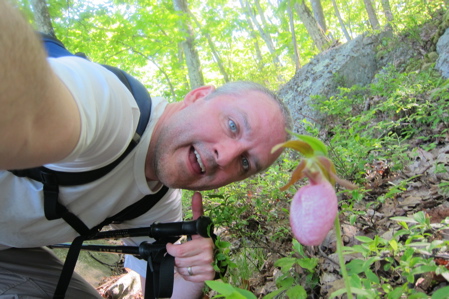 I found this pink lady’s slipper near the Thayer Brook

You can make a night of it too, by hiking back towards your car on 341 and staying in the well-kept Mt. Algo shelter. Of course, you can keep hiking south and stay in other shelters as well. Whatever you do, spend some time out here on the AT. I highly recommend doing so.

Here is my page about this section of the AT.